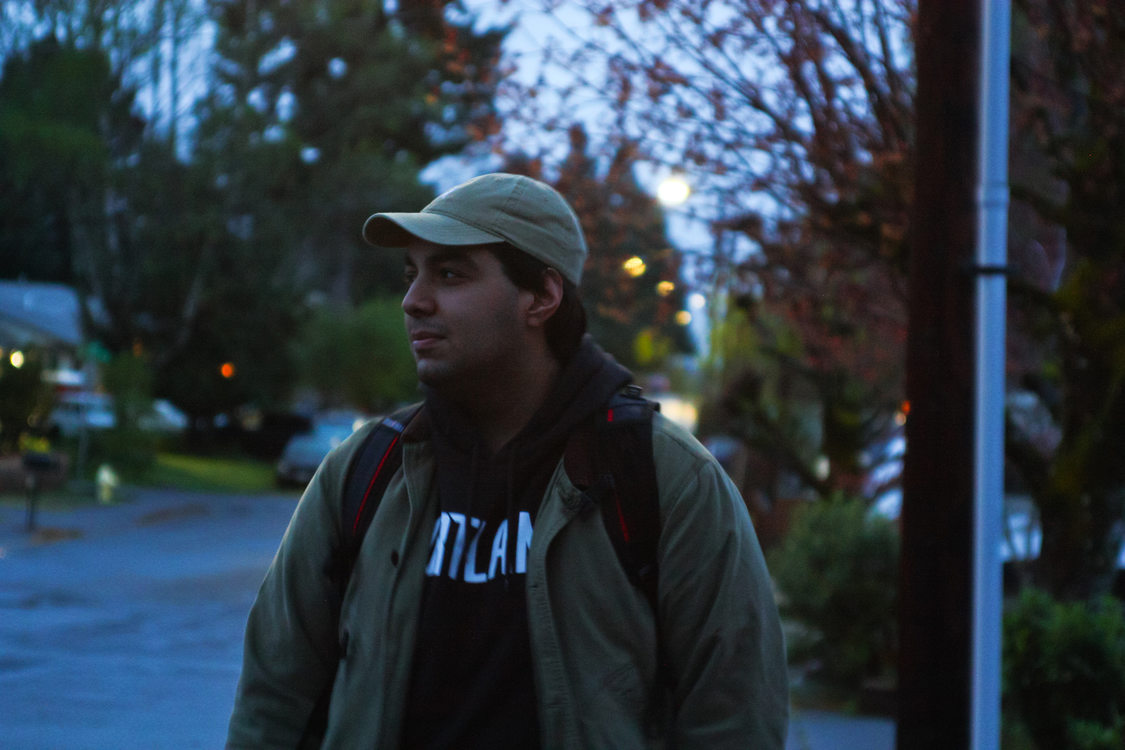 AJ Romero-Gemmell leaves his house in Milwaukie at six in the morning to get to his 8:30 a.m. class at PCC Sylvania in the Southwest Corridor. 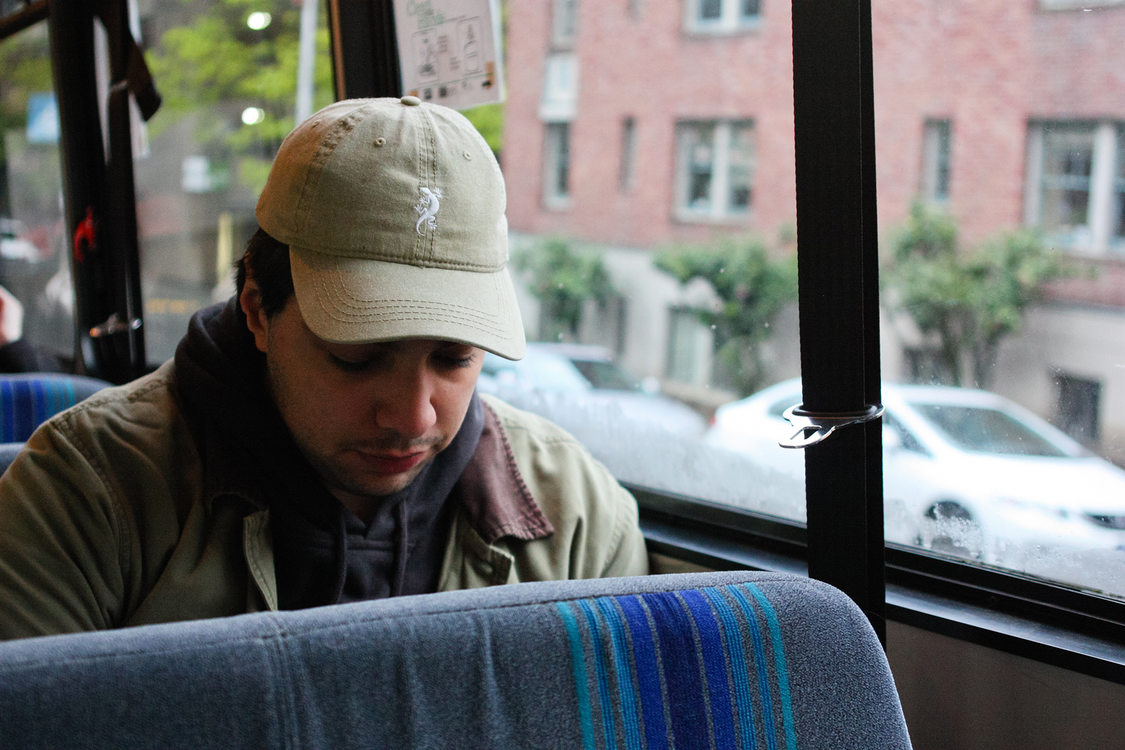 It takes him one and a half to more than two hours to make the trek to school.

The street lights are still on when AJ Romero-Gemmell begins his morning commute. The 18-year-old student wakes up at 5:30 in the morning in Milwaukie for his 8:30 a.m. class at PCC Sylvania.

Romero-Gemmell takes three modes of transit most days: the bus line 33-McLoughlin/King Rd, the MAX Orange Line and a Portland Community College shuttle that picks up students at Portland State University. He said he constantly travels, spending hours in transit even during his fastest commutes.

A ride-along with AJ Romero-Gemmell

AJ Romero-Gemmell on his way to downtown Portland on the MAX light rail, one of three modes of transit he takes daily.

“On my good days it takes me about an hour and a half all the way from Milwaukie to PCC Sylvania,” Romero-Gemmell said, “and that’s if every transfer is back-to-back, working perfectly. On some of the worst days, it’s taken two hours, two and a half hours.”

In many ways, regional decision-makers envisioned the potential light rail line in the Southwest Corridor for commuters, such as Romero-Gemmell, who need a fast and reliable way to get to and from the area.

Romero-Gemmell would benefit from the light rail project, but he worries about the changes that a large transportation investment could bring.

That concern is shared by Metro, TriMet and community partners behind the Southwest Corridor Plan. Property values tend to go up when new transit projects are built, particularly around light rail stations. Such public investments often attract private ones that include retail stores, restaurants and other commercial businesses.

That, in turn, has an effect on housing over time. Apartment building and other rental property owners nearby may either sell their properties or raise rents, sometimes displacing people and small business owners who cannot pay higher rent.

“Market forces can come to bear very quickly on things like this,” said Brian Harper, a regional planner at Metro. Harper points to a recent Portland State University study that shows an uptick in sales of unregulated, inexpensive apartment buildings in the area.

“We don’t want a situation where we build a light rail and the property values go up even more and the people who live here don’t benefit from the light rail and move somewhere else,” said Eryn Kehe, a communications specialist at Metro.

“We don’t want a situation where we build a light rail and the property values go up even more and the people who live here don’t benefit from the light rail and move somewhere else,” said Eryn Kehe, a communications specialist at Metro.

Metro has awarded $275,000 in grants to organizations working with communities in the Southwest Corridor area. These grants support six pilot projects that reach out to vulnerable people, help raise incomes and develop new businesses, and lay the groundwork to secure affordable housing.

“We are charting a new path to get ahead of this [displacement] and put policies and programs in place so that doesn’t happen,” Kehe said. “It’s new ground. We’re being creative. Nobody’s quite done this before.”

Greater Portland is already facing a shortage of affordable places to live, particularly for people with the lowest incomes.

High school senior Ibrahim Ibrahim said his parents looked for housing in Tigard for 10 months before they found an affordable four-bedroom townhome for the seven-person household. He believes his family’s rent would go up if the new light rail line is built, pricing them out of their current home.

“We're probably going to go to a place where there isn't transportation because that rent probably is going to be a lot lower,” he said.

Ibrahim is a three-minute drive to Oregon Islamic Academy, where he and his younger siblings go to school, and his father teaches math and Quran.

Living near their school, which is part of the Muslim Educational Trust, is very important to the Ibrahim family.

On June 7, the Metro Council considered referring a regional general obligation bond to build affordable housing to voters. The proposed $652.8 million bond is expected to cost an average of approximately $60 a year for Portland-area homes.

“The real benefit here coming in this early is that affordable housing providers can explore buying existing, unregulated affordable housing," Harper said. "They could buy land that would allow them to build new regulated units with rents capped according to people's incomes."

Harper said these efforts can help build a cushion of affordable places to live when privately-owned buildings become unaffordable.

In addition, TriMet has a practice of supporting affordable housing development on land left over after building light rail lines.

“We always work with our partners to see if housing or mixed-use projects are feasible on remnant lots created during light rail construction,” said David Unsworth, the director of project development and permitting at TriMet.

“We always work with our partners to see if housing or mixed-use projects are feasible on remnant lots created during light rail construction,” said David Unsworth, the director of project development and permitting at TriMet.

From Ibrahim's perspective, developers typically build apartments that are not the right fit for his big family. “We're seven people," he said. "We can't fit into even a three-bedroom apartment."

Home Forward received one of Metro’s equitable development grants to investigate exactly what type of housing culturally-diverse communities need. The nonprofit will work with the Muslim Educational Trust to do just that.

In addition, they'll explore what services the communities need, from prayer space and close access to community spiritual centers to services that support multi-generational living.

A new job, a new opportunity

Preserving affordable housing for low-income families is one way of helping people stay in their long-standing neighborhoods. Another way is to create meaningful opportunities for people to earn more money.

Admira Baltic is on that path, training for a new career with her current employer. For the past six years, she has worked at Oregon Health & Science University, cleaning operating rooms and getting them ready for surgery.

“It will make a big difference,” Baltic said. “Being a single mom with two children, definitely there's a struggle when it comes to paying my rent.”

A grant pays for the program’s training, including tuition, books, uniforms and certification costs. More than 225 people applied for 42 slots when OHSU inaugurated this training program with community partners earlier this year in January.

The strong interest in this program prompted OHSU and its partner, Immigrant & Refugee Community Organization, to apply for a Metro equitable development grant. They pitched a spin-off version of this grant program to expand these opportunities to OHSU employees who live in the Southwest Corridor.

Leisl Wehmueller, the workforce development manager with IRCO said immigrant populations are often the most affected groups when private investments begin to change neighborhoods. They are the people most likely to be displaced from their neighborhoods and jobs.

The Metro-supported grant program is designed to help people, like Baltic, stay in their homes in the Southwest Corridor, where they may enjoy a higher income and a faster commute. Baltic is excited by the prospect of a new light rail, which would help cut her hour-long bus commute in half.

The program, called the Promise of the SW Corridor, “will benefit current residents to aspire to and succeed in furthering their careers in an already promising industry, healthcare, while at the same time increasing their income level to affect a greater staying power in their neighborhood,” Wehmueller said.

The program, called the Promise of the SW Corridor, “will benefit current residents to aspire to and succeed in furthering their careers in an already promising industry, healthcare, while at the same time increasing their income level to affect a greater staying power in their neighborhood,” said Leisl Wehmueller, IRCO workforce development manager.

Riikka Salonen, OHSU program manager for diversity talent acquisition, said OHSU has more than 500 current open vacancies. That doesn't take into account future growth in the region that will only amplify the demand for these jobs.

One of the driving forces behind this workforce development program is to train more people into these jobs to keep up with the demand.

“Those people deserve the chance and we are here to offer that chance,” Salonen said.

Others with full and cautious support for the light rail project say people also deserve to stay in neighborhoods where they want to live – perhaps close to transit, schools, retail and grocery stores, and other amenities.

Review and comment on the light rail's initial route proposal

The draft environmental impact study of the proposed Southwest Corridor light project is out. Share your comments on the DEIS.

Who runs businesses and owns property in the Southwest Corridor? Who are the people who would be affected by transportation investments here?