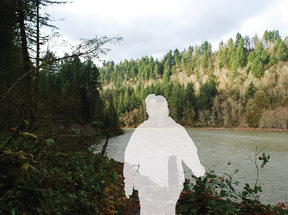 “We need the tonic of wildness … at the same time that we are earnest to explore and learn all things, we require that all things be mysterious and unexplorable, that land and sea be infinitely wild, unsurveyed and unfathomed by us because unfathomable. We can never have enough of nature.”
– Henry David Thoreau, Walden: Or, Life in the Wood

Henry David Thoreau sought escape from the noise of modernizing life. Using his friend’s cabin in a Massachusetts woods as a gateway, he could leave civilization for a primordial wilderness. From this private space, he admired, consumed and occupied nature, simultaneously lost and found himself in wilderness and, to his transcendentally inclined mind, its divinity. Thoreau found freedom from the conflicts of a corrupt society in what he saw as the inherent and separate goodness of pure nature and its unobserved, unpeopled bounty. When in 1854, Thoreau penned the words above, he laid down the most enduring Western idea of nature.

To experience nature as Thoreau describes it is to be the first to encounter, claim and maybe even conquer a mysterious space. To experience nature this way is to be revitalized. The American outdoor community is built on this relationship to nature. We revel in this mystical adventure, seeking the payoff of exploring new places, ticking off our list of species yet spotted. We go into nature to be restored and renewed, and we also find ourselves tapping into a desire to be the surveyor of the unsurveyed. We want to be explorer mystics.

Thoreau’s nature, for all its beauty and inspiration, is a fantasy. It is as real as Wonderland or Narnia. Or, to be less harsh, it’s just an idea, and it holds all of the experiences, worldviews and prejudices of the people who hold it. Thoreau’s nature – a separate, peopleless place where the individual goes to be remade – has been one of the most powerful ideas in American history, and it has defined how we see nature.

It has also dictated who we imagine belongs in the outdoors and what is the right way to be in nature.

The modern-day nature lover is someone who champions stewardship, conservation and values their access to invigorating outdoor spaces. At first glance, these concepts seem rooted in a desire to protect vulnerable places from human encroachment, preserving nature for the good it does for us and for its inherent value.

This process of defining the boundaries of nature – this is civilization, that is nature; this is a city, that is wilderness – puts a cage around the outdoors, making it accessible only by certain gates and for approved reasons. All of this requires land ownership, land rights and a concept of expertise to determine who should and shouldn’t have access. Basically, access assumes inaccessibility. Nature often creates very real barriers to access, but more often these barriers are constructed by us. They are built on foundations laid down centuries ago that established systems of privilege and oppression.

In the years before and following Christopher Columbus’ voyage to the Caribbean, a series of papal declarations set the justifications for how Europe’s emerging colonial powers could claim and parcel out land that didn’t belong to them. The declarations, which developed into the doctrine of discovery, divided the world into a Christian inside that could not be legitimately conquered and a non-Christian outside that was opened to enrich and revitalize those who could “discover” it. The right to claim Indigenous lands and resources was endowed by Christian men and limited to Christian men, and then, after European colonizers began to build a racial hierarchy, to white men.

A linked process was underway within Europe. A centuries-long trend of gating the land was mostly complete. The dwindling woods became game preserves accessible only to the nobility, and poaching became a crime. In England, Inclosure Acts transformed the countryside from patchworks of commons into unified and agriculturally efficient private holdings. This consolidation underwrote much of the Industrial Revolution, and it impoverished and displaced generations of peasants. Many of them sailed to colonies, filled with hopes and promises that they could do unto the American landscape what had been done to them.

In the young United States of America, the doctrine of discovery joined with the ascendance of private property to catalyze the settler expansion of Manifest Destiny. Land was “discovered” and claimed by the state, through men like Lewis and Clark, and then parceled out to individual white Christian men who would transform it from wilderness to frontier to civilization.

But, just as only Christians could discover new lands in the 15th century, only the civilized could civilize land in the 19th. You had to be the right kind of person who did things the right kind of way. This rightness was defined by white supremacy. This justified white settler expansionists to exploit, devastate and attempt the genocide of Indigenous peoples from the land, and to kidnap and enslave African peoples to toil the land but not benefit from it. This notion of racialized civility consigned other races to lesser human status and drew the line between who had access to land.

Through all of this, the connection between nature and people, or at least “civilized” people, loosened and slipped. Nature, wilderness, the outdoors: they became an other place, a separate place.

Where his contemporaries saw a rich land to be exploited (a very positive term at the time), Thoreau saw the great spiritual and intellectual value in nature. Having been separated from nature like most every European, he approached it as a place to cross into and discover. (He also demonstrated this discovery could be one that extracted only experiences, feelings and ideas, and the conquering could be turned inward in a process of self-discovery. But even this gentler approach occurs in the violent wake of colonization and the removal of Indigenous peoples.) Thoreau popularized that nature had value and it could enrich people’s lives.

Guided by Thoreau, conservationists like Theodore Roosevelt and John Muir advocated setting aside nature reserves. The two established the poles of our outdoors community, with Muir caring more for the spiritual value of nature as well as its inherent value and Roosevelt seeing a manly playground for his “strenuous life.” But both agreed that Indigenous people weren’t doing nature correctly and were in the way of people who knew how to do it right. Muir fought for the violent displacement of the few remaining Miwok peoples who lived in the future Yosemite National Park. And they agreed these reserves were not for the benefit of all people. They were for white men, preferably rich ones.

At the same time this “new space” was being set aside for white people, Black, Indigenous and other people of color were being more and more restricted. Black people, who carried and combined many African heritages of connection to land, were locked out of their nearby natural areas by Jim Crow laws (white people hunted, Black people poached) and evermore terrorizing white supremacy. Indigenous lifeways, which continue to offer innumerable alternatives to Western relationships to nature, were assaulted for generations in an officially supported cultural genocide. This continued, as governmental policy, deep into the 20th century.

The little pockets of nature that were created in cities – parks, swimming pools, beaches – were set for white people to use exclusively, either legally or by placing them inaccessibly far from Black and Brown neighborhoods. When legal segregation and housing discrimination ended and white flight began, suburbs provided white families closer access to once-remote places and simultaneously became a wall further separating people of color from natural spaces. Marketing and imagery of the outdoors, both reflecting and creating its consumer base, was of white explorers and spiritualists trekking into nature, with people of color relegated to roles as primal natives.

Today, the effects of exclusionary policies and designed inaccessibility of outdoor space still linger, but stronger is the institutional disconnect forced upon the millions of descendants of people whose lives were stolen and exploited on this land. This generational trauma underlays the discomfort and mistrust of the outdoors by many communities of color.

As an outdoor community, we are still in the first generation of attempting to heal these traumas and break down the barriers intentionally placed between Black, Indigenous, and people of color communities and the outdoors. Unfortunately, the toolbox we inherited from Thoreau not only limits us but continues to perpetuate harm.

More and more, we see outdoor-based organizations, which remain overwhelmingly white, promote equity and inclusion initiatives. Most often, these efforts seek to bring people of color, usually children, into the existing programs, activities and mission of the organization. So diversity, equity and inclusion programs focus on providing access through affordable nature experiences, park access and outdoor gear donations.

This generosity seeks to bridge real gaps, but it also reinforces notions of a separate nature, and that a specific group of people hold the right knowledge, the right to the land and the right equipment to access it. It tells people of color that there is a correct way to do nature, and it’s not from their communities, when in reality communities of color have deeply rooted relationships with land and waters that endure now and have sustained centuries of healthy ecosystem relationships.

The legacy of naturalist visionaries and colonizers ensure that we view nature as endangered and ultimately as something that is other. Being in nature means wearing the right equipment, having the right permits and holding the right values to ensure that nature remains a pristine wilderness; that it is eternally observable and protected. The question is who does this model of nature serve and who does it exclude? Historically, this imagined person is a white man. And while who deserves access to nature is now based more on colorblind criteria like temperament and worldview, the people who are most likely to have or be perceived to have these approved qualities are white.

It’s only been about 155 years since the abolition of slavery (and the start of ongoing convict lease labor) and just 56 years since the end of the Jim Crow. Tribal termination and the Salmon Wars happened barely a generation ago. Only recently have we seen outdoor-based organizations promote equity and inclusion initiatives. The turnaround between an era of racialized violence and exclusion into a moment swelled with language about equitable land access and visibility in diversity could give you whiplash. It’s barely begun.

But it has begun. The call to unimagine the walls between people and the world and to reclaim old, never-gone ways of being with the land has been made: We must answer.