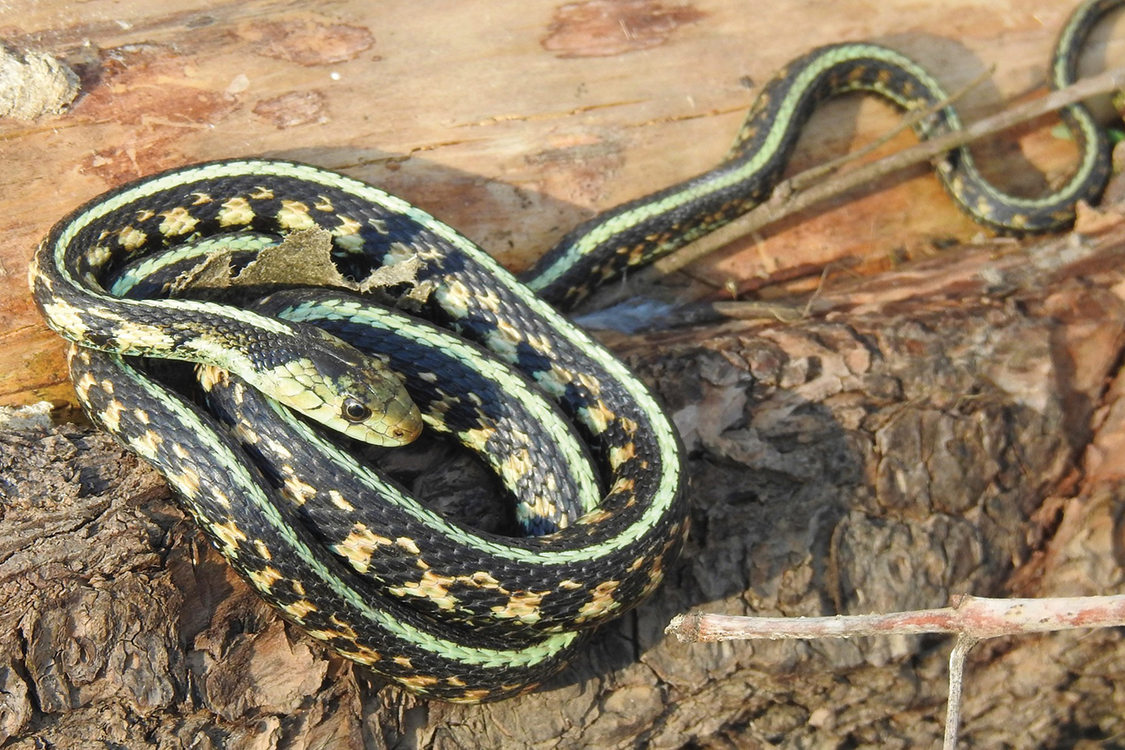 The first quick movement over the low grass caught me by surprise. A small snake moved rapidly away from me. Then I saw another. Then another. As I walked up the sunny south-facing slope on a late May morning, it seemed like every footstep generated a fast getaway by another young snake. I spotted a dozen or more over just a short distance.

On that day I was visiting a natural area in the west hills of Portland, walking up an abandoned power line corridor. Metro had recently protected the land with funds from the 2006 natural areas bond measure, and I was exploring the land to get to know it better. There was a mix of forest and shrubby habitat, with scattered logs and branches and thick piles of leaves on the ground. A stream ran along the border and seeped water onto an abandoned access road. The warm south-facing slope brought out the snakes to bask in the sun. I had, to my delight, shown up at the right place to see all these common garter snakes wiggling through the grass.

Snakes play an important role in a healthy ecosystem, though their value is often hidden from us by their low profile on the landscape. Oregon has 15 species of native snakes, and four that are relatively common in Metro natural areas. Among all Oregon snakes, only the western rattlesnake, has venom poisonous to humans. It doesn’t live in greater Portland.

Snakes are both predator and prey. Our local species eat small mammals such as mice, voles, slugs (including the non-native slugs that decimate my garden in the spring), snails, frogs and even fish. The common garter snake can eat rough-skinned newts, whose powerful nerve toxin sickens and kills other predators. Snakes, in turn, are food to other animals. I have often seen birds such as hawks and herons plucking up snakes from grassy fields. Foxes, coyotes and even larger snakes hunt and eat snakes, as do domestic dogs and cats.

Like many people, I always startle a little when I spot a snake as I wander around outside. Then I pause and study their colors. Our local garter snakes can be brightly colored with deep reds, rich creams, even blue and green stripes and spots. The gopher snake’s alternating patterns of tans, browns and blacks help them easily blend into the forest floor. The wrinkly, silky gray rubber boa – a tiny, distant cousin of the boa constrictor – looks like a velvet ribbon.

Equally engaging are some of the science terms for describing the natural history of our snakes. Garter snakes and rubber boas are ovoviviparous: they hold their eggs within their bodies until the eggs hatch, and then mom boots the baby snakes out. Or hibernacula: places where large numbers of snakes will shelter together during the winter. And finally, all of our snakes go into a winter brumation: a period of significantly reduced movement by cold-blooded animals during the cold months.

Much of Metro’s habitat restoration work benefits snakes and other small, less noticeable wildlife such as the Pacific jumping mouse, little brown bat or long-tailed weasel. We provide shelter and food for these little creatures by protecting or adding fallen trees, rock and brush piles, and standing dead trees called snags, and by planting abundant native plants in our natural areas. Making connections between habitat patches helps them move safely to new areas. This restoration work, along with that of many partners, helps ensure that native wildlife can survive and thrive in our urban region.

It is winter now, and many animals are tucked away in hidden places to wait out the cold weather. Many of our snakes are brumating in hibernacula. The woods are quieter these days and I do not expect to see a snake again for a few more months, though I am looking forward to that first springtime startle.

Find and color the amazing birds that make Sauvie Island home for winter and all year round.