A group looking at greater Portland's growth management seems close to agreement on four changes that could improve the system.

The 17-member Urban Growth Readiness Task Force asked technical experts on the Metro Technical Advisory Committee – mostly staff from city planning agencies – to draft a plan to give the Metro Council more flexibility to respond to city requests for modest expansions of the urban growth boundary to provide housing.

The Urban Growth Readiness Task Force was created as part of the Metro Council's decision not to expand the urban growth boundary in December 2015. Its members were appointed by Metro Council President Tom Hughes. They include:

The changes rely on a few key principles, notably this: The 24,000 acres of urban reserves around greater Portland represents the most the regional UGB will expand by 2060.

Officials are trying to find areas to expand the urban growth boundary in areas that can be served by pipes, roads, parks and schools.

Some cities, like Wilsonville, have eyed small expansions of a few hundred acres in areas that could be developed quickly. But until the Clackamas County Commission reaches an agreement with Metro on establishing urban reserves in that county, Metro has to rely on soil quality to decide where to expand the UGB

The task force is considering a proposal that would amend the Metro Code to clarify what cities need to do to get UGB expansions; change the way Metro looks at regional housing needs to avoid "spillover" growth to bedroom communities outside the UGB like Sandy and Newberg; give Metro more flexibility to choose UGB expansion areas based on city requests; and allow Metro to "swap" areas where development isn't imminent out of the UGB, and exchange them for areas where growth could happen quickly.

At a meeting last Wednesday, some members of the Urban Growth Management Task Force expressed reservations about some of the proposals put forward by the cities' and counties' technical advisory committee representatives.

One idea discussed was a cap in the number of acres that could be added between regular reviews of the urban growth boundary.

While periodic UGB reviews allow Metro to add land for large-scale developments like the 1,400-acre South Hillsboro, the between-cycle reviews would allow the Metro Council to amend its technical assessment of the region's growth – the Urban Growth Report – for smaller UGB expansions.

As a conversation starter, members of the Metro Technical Advisory Committee suggested a cap of 900 acres between comprehensive urban growth reviews.

Metro Council President Tom Hughes said the cap was designed to allow only modest, mid-cycle adjustments requested by cities and not intended to address large developments that are considered every six years.

Committee members agreed to continue working on the proposal, with more specific language on the concept drafted within the next month.

Clackamas County Chair John Ludlow expressed opposition to one of the proposed concepts, the "land swap."

Ludlow wants to ensure that if land is taken out of the UGB in an area that is struggling to see development, any land added would be in the same county.

But Hughes says housing capacity is a regional concern for which Metro has responsibility – that Metro needs to be able to add land to the UGB in urban reserves throughout the region, specifically, those that are best positioned to produce housing.

Other committee members, who weren't at Wednesday's meeting, wrote that the recommendations from city and county planners at MTAC were on the right track.

"I have long supported an urban growth boundary expansion process that recognizes the unique needs of areas within the Metro region," wrote Washington County Chair Andy Duyck. "The proposed modifications are heading in the right direction with the addition of factors, such as commute distance and localized housing needs, which allow for considerations beyond regional need."

"The City is in general support of the proposed concepts and implementation suggestions; however, the lack of detail and specificity is of concern. We believe that this concern can be addressed over time as details are developed with input from the technical committees," Knapp wrote. "The City encourages Metro Council to keep the Task Force structure in place for the foreseeable future to act as a sounding board and provide recommendations going forward. We see this feedback loop as a critical element for success."

Sherwood Mayor Krisanna Clark took a more nuanced approach in her letter to the task force.

"This is a great start," she wrote. "It is clear that the intent is to provide greater flexibility in the process."

But, she said, she had concerns that the changes could backfire on efforts to make growth management more nimble.

"We are concerned that, as proposed, we are creating an additional system and process that adds another layer of bureaucracy rather than providing more opportunities to bring areas in and see them developed with much needed housing within a reasonable timeframe," she wrote.

A next meeting is not yet scheduled though task force members suggested that late October would allow technical staff to refine the concepts further. 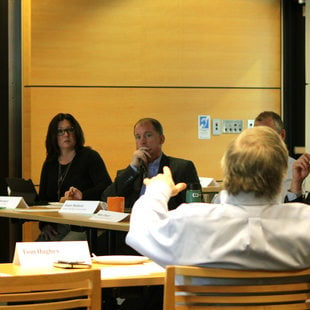