For the first time in a decade, the Metro Council opted not to expand the Portland region's urban growth boundary on Thursday, voting 7-0 to leave the boundary as-is.

The vote was a nod to changing times in the area, and a different approach to growth and the money that drives it.

Under state law, the Metro Council is obligated to periodically ensure that greater Portland has enough land inside its urban growth boundary for 20 years of housing and job growth. Communities around the edge of the region often apply for expansions, showcasing growth plans and ways to pay for roads, pipes and schools as opportunities for future growth.

But after the last big expansion in 2011, only one community, Wilsonville, stepped forward as an informal candidate for a small expansion – less than 1,000 acres – to the region's 258,000 acre urban growth boundary.

Federal subsidies for things like pipes and streets have dried up. And Wilsonville got caught in the ongoing legal limbo of the region's urban and rural reserves plan.

Meanwhile, demographics are shifting. Thousands of new apartments are under construction in Portland, and demographers and economists expected that the region's share of multi-family housing would increase from 35 to 42 percent of all homes by 2035.

That led to Thursday's vote.

"We value planning for growth versus ignoring it. We invest in our existing communities and support jobs for growth, so we each have the opportunities to lead healthy, productive and enjoyable lives, while protecting the valuable farmland, forestland and natural features that shape our region" said Councilor Kathryn Harrington.

This year's urban growth boundary review, usually one of the more contentious matters of regional politics, was relatively calm. Only two speakers testified at three public hearings this autumn, and a handful of advocacy groups submitted written testimony. Of course, many more spoke up as Metro worked toward its decision, particularly late in 2014, when the council accepted a draft urban growth report.

In a letter earlier this month, land conservation group 1000 Friends of Oregon supported the recommendation, calling it a victory for the region.

"It means that rather than continuing to pay for new roads and pipes to subsidize sprawling, expensive developments at the region's edge, taxpayers can see their money go towards repairing the roads we already have, providing safe sidewalks and bikeways, and investing in existing vacant and underused lands for new jobs," said policy director Mary Kyle McCurdy in the letter. "It means the region can reduce air pollution and come closer to meeting its climate goals, because residents will have choices in how to get around and not need to drive as much or as far."

Most of the opposition to maintaining the boundary came from home builders.

In a letter to the Metro Council, two representatives of a coalition of house builders criticized Metro's forecast of more residents living in apartments.

"As we have stated previously, our concerns with the results of the Urban Growth Report results have been centered around several key items: 1) An unprecedented projected long-term shift in housing mix to apartments and condos; 2) the assumption of low homeownership rates that don’t reflect economic recovery and demographic trends; and 3) the combined affects that an incorrect supply of housing types, increased demand and lack of land supply will have on housing affordability," wrote Nate Bond, president of the Home Builders Association of Metropolitan Portland, and Jim Standring, the group's government relations chair.

The group called on the Metro Council to change its growth planning to include a 5-to-7 year, short-term supply of buildable land, along with its 20 year supply.

"The 20 year supply allows areas like Damascus, or areas that require voter annexation but which have repeatedly not been annexed, to be kept as phantom inventory due to the uncertainties in political processes over a long horizon," they wrote. "In order to address housing demand and affordability, we need to make sure there is a short-term supply of housing in addition to a 20 year supply."

The council didn't move toward accepting the house builders' recommendations, but did accept that there are questions about the long-term sustainability of the region's apartment boom.

Metro staff is expected to immediately start another review of the urban growth boundary, which could be adopted as early as 2018. That would give the Metro Council a chance to change course if the apartment boom tapers off and more residents start choosing single-family homes again.

"There are a number of explanations for how we've gotten to the place we are now," Hughes said. "In three years we can kind of be able to distinguish what's happening. The numbers won't change significantly, but they might change enough to give us an idea of which of those scenarios about where we are where we are is the reality."

Councilor Bob Stacey said he didn't think a three-year review was needed, but didn't push back against the timeframe.

"There's no problem here to fix," Stacey said. "We're doing a great job, as a region, and we can do a better job at suburban provision of urban facilities and services. We must all do a better job on housing affordability for those who cannot compete in the marketplace for housing in our metropolitan area. That is an area where public action and public resources will need to be focused in the future."

Usually, Metro's urban growth boundary decisions are automatically reviewed by the Oregon Land Conservation and Development Commission. But because no land is being added to the UGB, any appeals would be heard by the Oregon Land Use Board of Appeals. 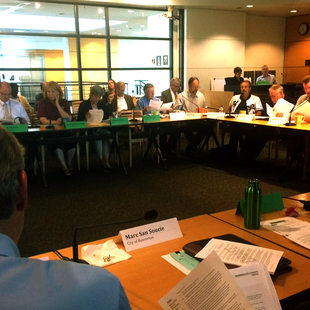