In the halls of Parkrose High School, Jay’Veontae Hudson, who goes by JayJay, walks with easy confidence as he stops to greet every teacher and staff member on his way to the lunch room.

Although the halls of the Northeast Portland school are mostly empty in the summertime, JayJay’s presence fills the corridors. He smiles widely as he settles in his seat. “The halls get old, but the people don’t,” Hudson said.

Like other students, he attends summer classes and fills his afternoons with a wide variety of extracurricular activities, including football, basketball and rugby.

Unlike the majority of students who attend Parkrose, this year will be the first Hudson has had a stable home.

Hudson, an incoming senior at Parkrose High School, is one of the roughly 22,000 K-12 students in Oregon affected by unsteady living conditions. While he was attending Parkrose Middle School, his family life changed suddenly and he was forced to leave his home. For a couple years, he stayed with his brother at his grandmother’s house, but it soon grew overcrowded and Hudson had to leave.

Parkrose School District has provided him with much-needed help. With a homeless rate of 10%, one of the highest in the state, the school has worked to provide homeless youth and students living in unstable conditions with resources. The program, known as the Gateway System, helps students with everything from free school lunches and TriMet Hop Fastpasses to paying for Christmas gifts and prom tickets.

Because a large part of the student body is homeless or living in unstable housing, students also have created programs to aid their peers. Last year, Parkrose High School started its own food pantry and clothes closet, a program called Parkrose Provides. Students are able to take home backpacks filled with food and clothes as needed. Hudson was a founding member of the Parkrose Provides program and appreciates the support from teachers, administrators and others who work at the school.

“The staff here needs to be paid $300,000 more because the teachers here do more than teach, the staff do more than their jobs,” Hudson said.

Throughout the years, Hudson bounced from house to house, staying with distant cousins, brothers, friends and even coaches. But those housing options didn’t last long.

“There was a place to go, but there was no place to live,” Hudson said.

Hudson thought that he had found a more stable housing option when he reconnected with his older brother. He stayed with his brother's family until they moved out of Oregon, leaving Hudson without a place to call home.

Hudson, while used to unreliable housing, was unsure of where he would stay, especially with spring break approaching. He said it was hard to focus on his studies, his mind constantly on his next move.

“We had a test in class the next day, but I didn’t pay attention to anything,” Hudson said. “I was daydreaming about what could happen and what I could do.”

Living on the streets

While students such as Jay’Veontae Hudson are fortunate enough to rely on a support systems within the families and homes, many who lack stable housing are not as lucky.

Across the Portland area, hundreds of homeless children and teens are living on the streets.

According to the 2018 annual Homeless Assessment Report to Congress, the U.S. Department of Housing and Urban Development found the estimated number of homeless individuals in the state of Oregon is 14,467. Of that number, the total number of unaccompanied homeless youth is 1,309 individuals.

If you are homeless, under the age of 25 and looking for shelter or other crisis services, contact Multnomah County’s 24-hour youth hotline at 503-432-3986.

That was when Hudson reached out to a close friend about his concern over his housing for the break. Hudson’s friend no longer attended Parkrose, and was now living in foster care with a Parkrose staff member. Hudson reached out to Parkrose English teacher Jacquelyn Meza, who quickly offered Hudson the opportunity to stay with her parents over the break while Meza worked on a permanent solution for him.

That solution came in the form of math teacher Tammy Stamp, who agreed to house Hudson through the state foster care system.

Now, instead of worrying about where he would buy clothes or basic toiletries, Hudson can rely on Stamp. Hudson said it’s a dynamic that has long been missing.

“It’s weird because I’m used to being the only one responsible for myself,” Hudson said. “She buys all my toothpaste and floss now.”

Hudson knows that his life could have been entirely different if it were not for his community. He looks forward to starting senior year in the fall, running for senior class president, and looking at colleges without the pressure of trying to find somewhere to sleep.

Hudson said he doesn’t let his past define him, but remembers it as he takes his next steps in his life: “I’m just glad that through it all I was able to stay the same kid that I was back in sixth grade.”

Portland's historic Chinatown shows signs of revival as new stores, along with the Lan Su Chinese Garden and Old Town Community Association, all express efforts to honor the past, preserving the present and incorporating the future in order to keep Portland’s New Chinatown/Japantown Historic District on the map. 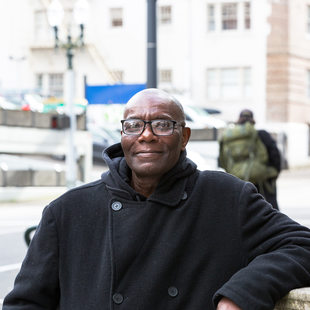