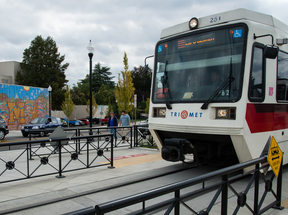 One year after MAX, what's next for the Dogwood City of the West? 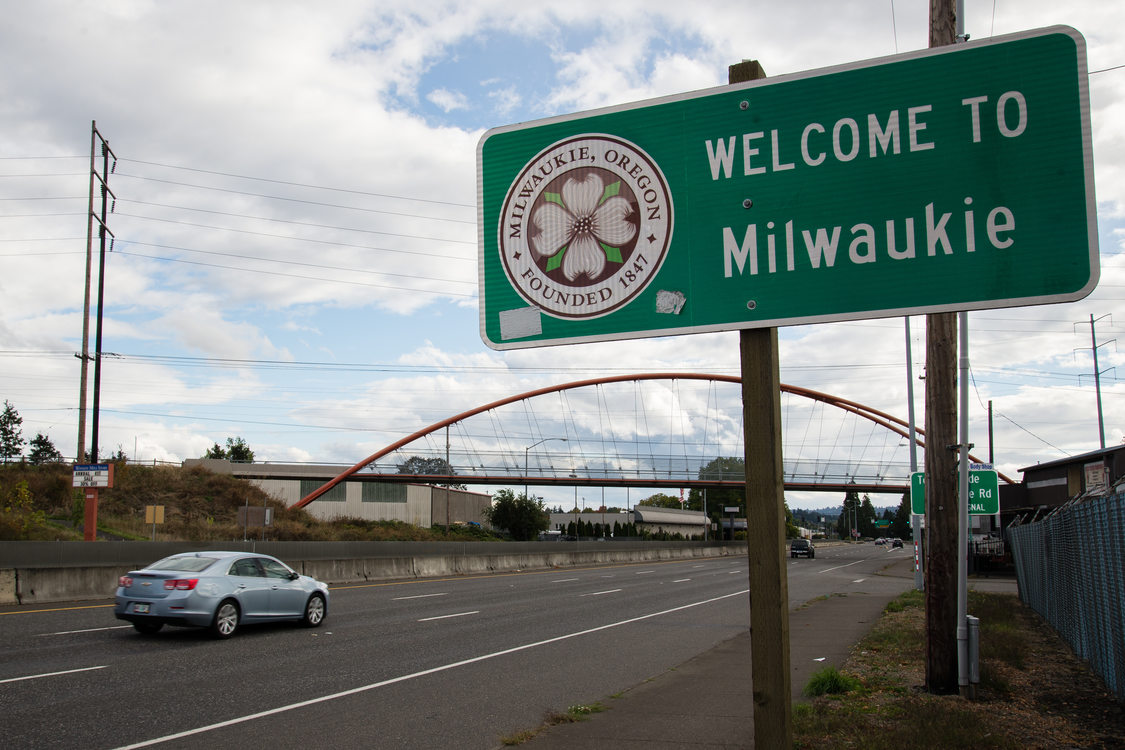 At first glance, the North Milwaukie Industrial Area looks like any other industrial district. City leaders are beginning a Metro-funded process to explore how this area might build on its advantages to create new opportunities for economic development. 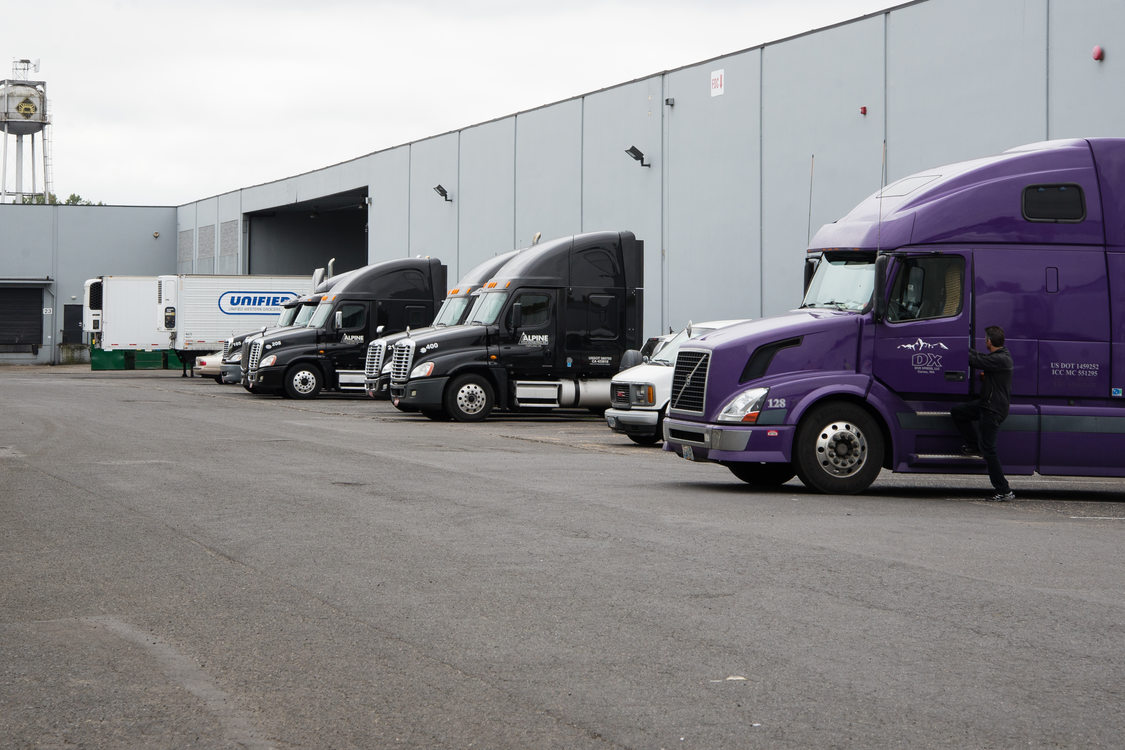 The 200-acre North Milwaukie Industrial Area is home to 87 businesses and around 2,000 employees. Many of the businesses in the area are large warehouses and storage. But with a close-in location that's now served by light rail, leaders are exploring how to build on its potential to create new jobs and other economic opportunities. 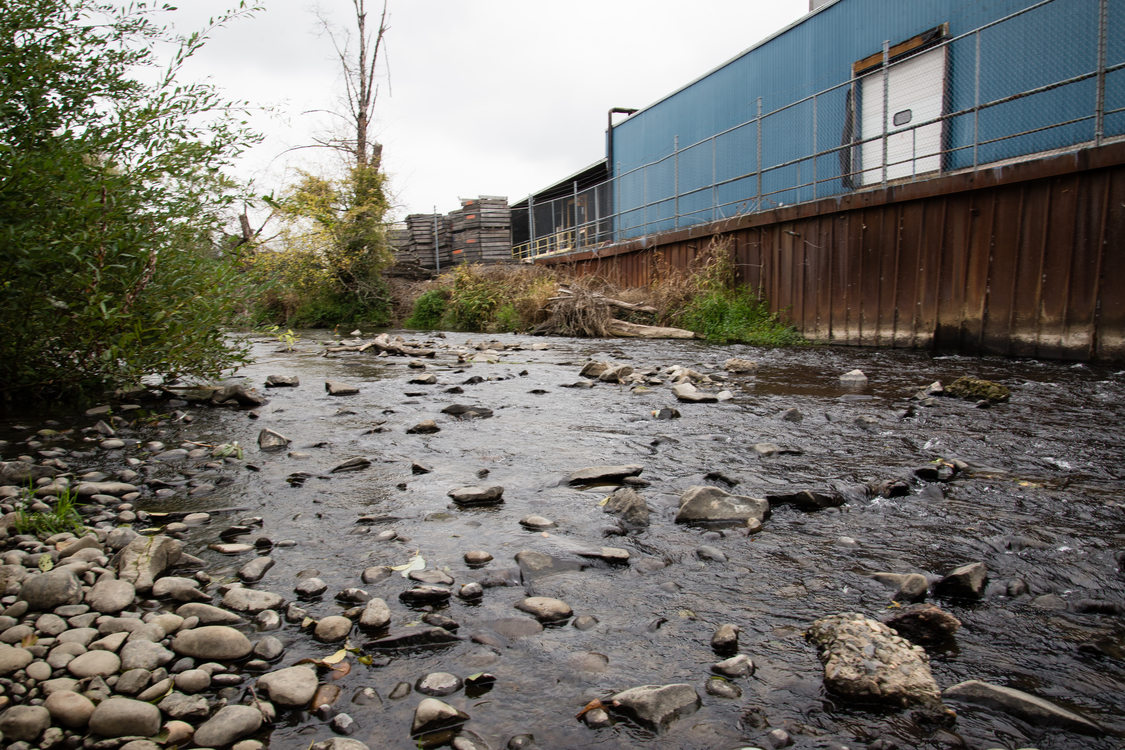 Johnson Creek courses largely unnoticed behind industrial buildings in North Milwaukie. The creek is one unique feature of the industrial district – and a restored creek could turn into an asset in the area's future development. 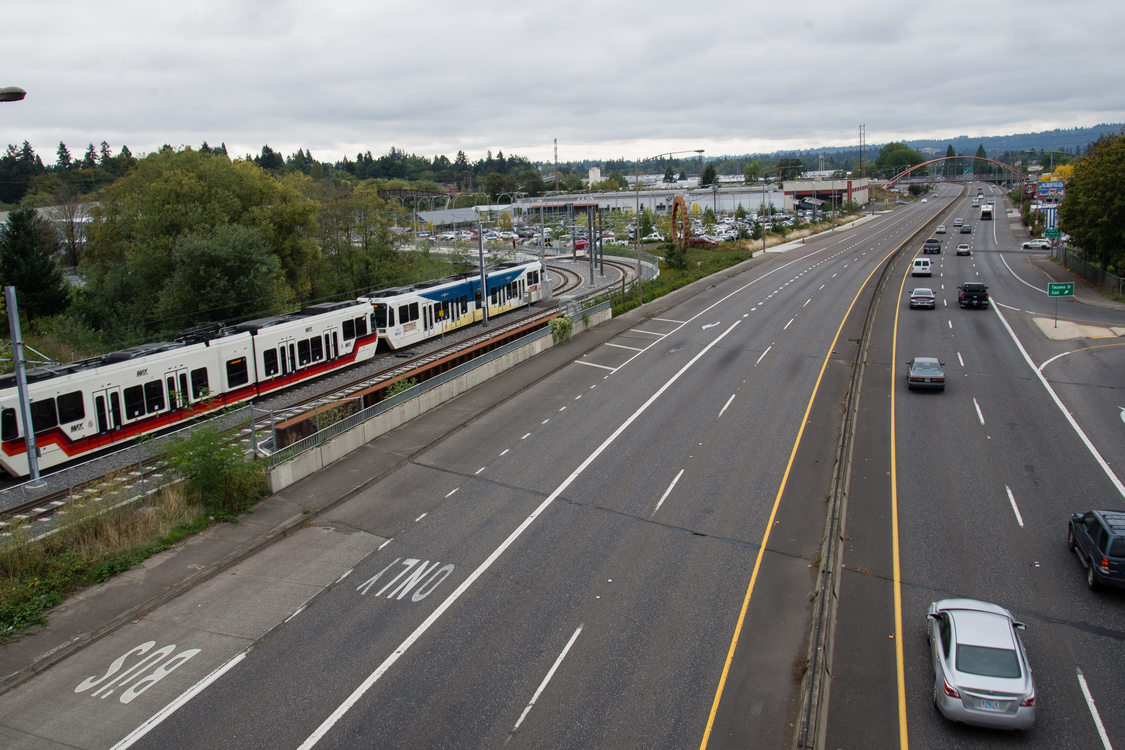 A MAX Orange Line train glides out of North Milwaukie as traffic passes by on McLoughlin Boulevard. The arrival of MAX presents new opportunities for the district, much of which is within a short walk of a station. McLoughlin also remains a crucial link for trucks, and planners seek to improve connections from local roads to the highway.

At first glance, North Milwaukie looks just like any other industrial district. Large gray warehouses cover much the neighborhood while loud, heavy semi-trucks roar down wide McLoughlin Boulevard and nearby streets.

Soon that could change.

As officials continue to look for opportunities to promote healthy growth in a town that has struggled to develop economically, a regional partnership could help ensure the vitality of the North Milwaukie industrial district for years to come.

In December 2015, Milwaukie and Clackamas County embarked on creating a new vision for this area called the North Milwaukie Industrial Area Plan – a Metro-funded project that aims to enhance the industrial neighborhood by providing guidance for its redevelopment. Officials hope to attract new business and commerce by creating what a project website calls "a vibrant, mixed-use urban area."

“We have to think of it from a regional standpoint because there isn’t always a lot of industrial land,” said Amy Koski, Milwaukie’s economic development coordinator. “We have to use that industrial land appropriately.”

North Milwaukie has one asset that many industrial areas don't: Direct light rail access. Most of the district is within a half-mile of the Johnson Creek/Tacoma Street Station.

In 2013, the Milwaukie City Council adopted the Tacoma Station Area Plan, a project that strived to examine opportunities and redevelopment along the then-under construction MAX Orange Line, which opened Milwaukie to the regional light rail network.

The station area plan was largely conceptual, envisioning a range of potential uses near the light rail station, including a potential mix of employment, retail and residential redevelopment. The North Milwaukie project is a more thorough look at the larger district.

“This is an opportunity to explore in terms of higher-density usage, given its proximity to Portland,” said Alma Flores, Milwaukie community and economic development director. “We’re talking about six miles outside of downtown Portland – it’s a community area on the verge of something great.”

One of the main goals of the plan is to increase “private capital investment and family-wage job creation” in the district, according to the project’s description. Planners hope to accomplish this goal by addressing many of the current barriers to development in the district, including polluted brownfields, abandoned buildings and confusing roadway access.

“I’m excited to not only identify solutions that we have for this area, but to also see what the strategy will be for the implementation of those needs,” Flores said.

Metro Councilor Carlotta Collette, whose district includes Milwaukie, says the vision could not only transform the area, but can also make a powerful statement regarding development in the region.

“My hope for this project, now that we have the light rail station there, is that we look at the whole area in a really integrated way and think about it from the perspective of what it could be, not just what it is,” Collette said.

“I think we have a huge opportunity here to work together – the county, the city of Milwaukie and Metro – to really in some ways create an urban model of how we could transform a 200-acre site,” Collette added. “We could transform it into a multi-use site with many more jobs than it has right now.”

Metro’s contribution comes in the form of a Community Planning and Development Planning Grant, awarded to cities and counties throughout the region in order to improve and enhance communities for housing and job creation. The Metro Council awarded $250,000 to the project in December 2015.

“You can’t do it alone,” Flores said. “I’ve been part of the economic development world for a while now, and I always appreciate when you can have external and internal voices at the table that move forward with an objective.”

“I know the city’s interest in this is to really make sure we go through a public process and make sure we hear from stakeholders, community members, and the partners as well,” Koski said. “We’re trying to really talk to property and business owners and really understand what their needs are.”

Rick Anderson, president of Anderson Die & Manufacturing, said he's skeptical about how planning efforts translate into on-the-ground changes. He noted that previous plans have not come to full fruition.

“I’m not sure what will result from the project,” Anderson said.

Anderson’s company has been in its current location since 1965, near where the Springwater Corridor Trail crosses McLoughlin Boulevard. He said he has no intention to move the company.

Milwaukie officials plan on reaching out to key stakeholders, businesses and property owners to ensure their voices are part of both the process and the recommendations for the area.

“We don’t want to send the businesses running away," Collette said. "We want to encourage a different mix of businesses.”

Though there aren’t any new parties interested in investing in space in the North Milwaukie area at the moment, Flores says that will likely change in due time.

“I think it’s a wait and see,” Flores said. “For the city, it just sort of depends on timing and the right project, as does everything else.”

Local staff kicked off North Milwaukie planning this fall with an open house and advisory group meetings. Planners expect to complete a final strategy for the area in summer 2017. They encouraged people interested in the plan to sign up for updates.

While the Orange Line MAX understandably grabs much of the attention, it's not the only thing that's making it easier and safer to get around Milwaukie. City leaders and residents are celebrating a number of recent or planned improvements and efforts in the community. Here are a few.