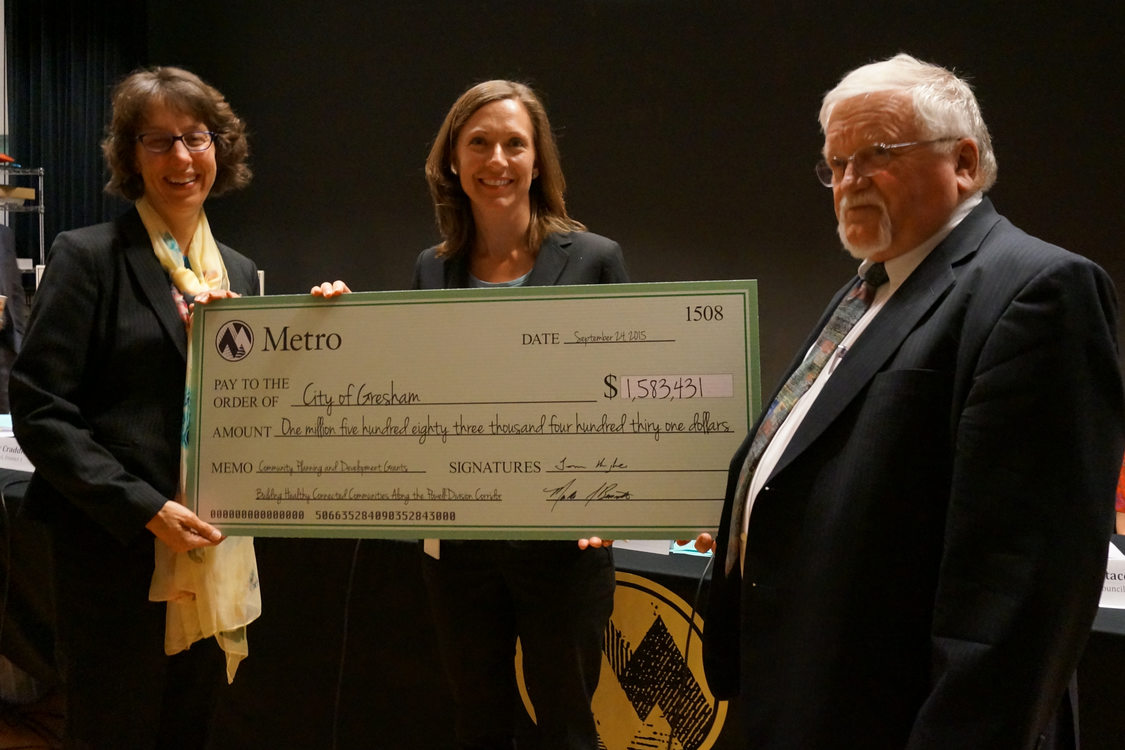 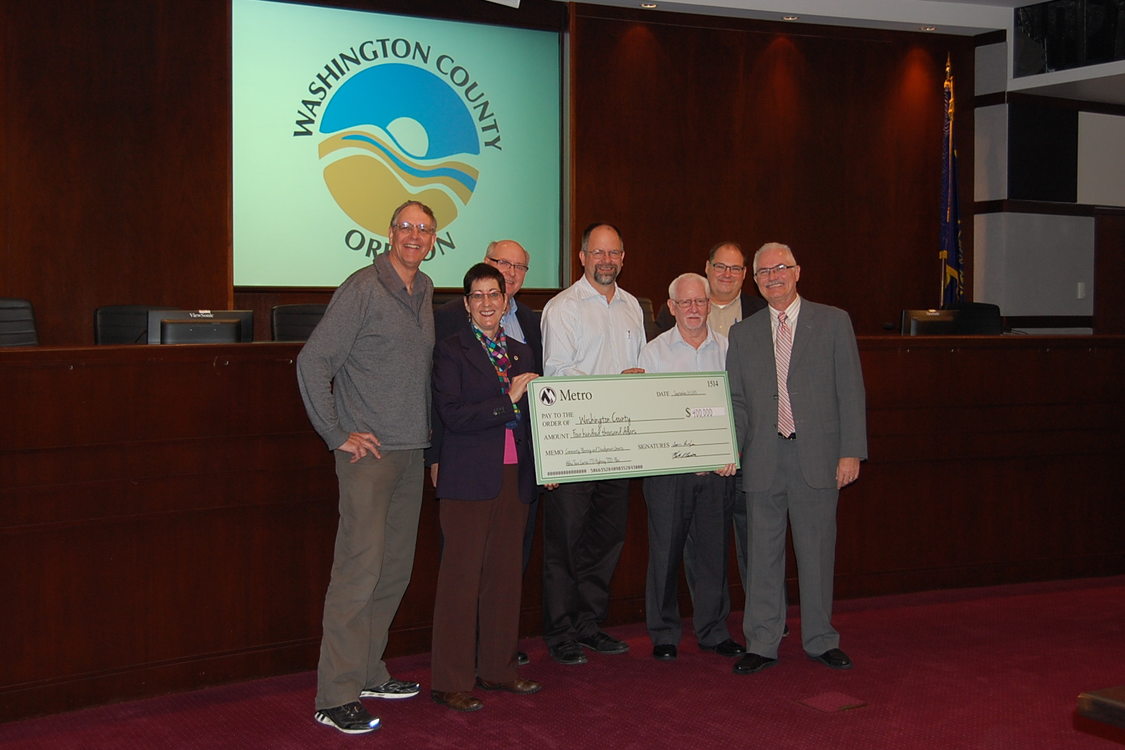 Metro councilors Kathryn Harrington (second from left) and Craig Dirksen (far right) presented a ceremonial check to the Washington County Board of Commissioners on Oct.13. Washington County received $400,000 to develop a land use and transportation concept plan for the Aloha Town Center and Tualatin Valley Highway.

Amidst halls decorated with collages and crepe paper, and over the distant shouts of children still waiting for their parents to pick them up, Metro Council held a rare off-site meeting Thursday afternoon in the auditorium of East Portland's Harrison Park School to discuss the future of the region.

The first item on the agenda: the announcement of 16 grants totaling a little more than $4.7 million for the fourth cycle of Metro’s community planning and development grant program.

It might have seemed an unusual venue for a regional government to convene, but the school and its location hold a special importance in relation to work being discussed, as well as Metro’s larger role within the region, said Metro Councilor Bob Stacey, whose district encompasses the school and its neighborhood, recently rechristened the Jade District.

“Today, we’re meeting at the midpoint between the Willamette River and the eastern border of Portland,” Stacey said. “Here in the Jade District, we’re also at the center of very significant demographic and economic changes that will be transforming our region. In the David Douglas School District, just to our east, there are 80 languages spoken at home. Changes like this are happening across the region, but nowhere faster than here in East Portland.

"We see the future here of our region, our state, of America," Stacey added. "A future in which our prosperity will depend our ability to collaborate and cooperate.”

The grants are designed to help with that future.

Previous grant cycles in 2006, 2009 and 2013 funded a variety of local planning efforts inside and outside the urban growth boundary, all made possible by a by a small excise tax on most construction projects in the Portland region that cost over $100,000.

Along with a new emphasis this year on social equity in its criteria for grant applications, the program’s overarching mission has seen shifts, said Gerry Uba, Metro’s senior planner managing the program.

“In 2007-8 there was a discussion percolating around the region: these grants were great, the planning was great, with parks, open spaces, schools and new roads coming to the fringes, but what about the inner areas?” Uba said in an interview.

Along with a new stipulation emphasizing social equity in its criteria, this latest cycle is unique, Uba said, for having nearly all of its applications focused on areas within region’s urban growth boundary. Only one, Clackamas County’s Stafford Area Preliminary Feasibility Assessment, concerned conceptual plans for growth outside the current boundary. The remaining 15 plans deal with strengthening already existing centers, corridors and main streets within the region, something Metro chief operating officer Martha Bennett called “serendipitous.”

“Among all the grant programs at Metro, the community planning and development grant program is unique because it allows us to do the on-the-ground planning that removes barriers to the kind of development that we have been planning for since the 2040 Growth Concept was adopted about 20 years ago,” Bennett told the council. “Many of these applications actually implemented recommendations we made to council to make sure we’re investing in the places of the region where we want to see development happen.”

Together with a screening committee composed of Metro staff and members of the public experienced in urban development, Bennett provided councilors with a series of funding recommendations and stipulations for each of the grant proposals in early September.

Among the list of jurisdictions to receive grants were two of the smallest cities in the region, Fairview and Gladstone.

Fairview received $100,000 to work with neighboring jurisdictions to build upon the 2012 East Metro Connections Plan and undertake an economic development analysis of the Northeast Halsey Street corridor.

“Basically, we saw this plan as a way for the cities of Wood Village, Fairview and Troutdale, with great help from Multnomah County, to oversee a joint vision of what the future of the Halsey corridor should look so that it helps all three cities,” said project manager Allan Berry. “It’s also setting a tone for cooperation, with all of the cities’ staff working together, cognizant of each other’s needs. We’ll be involved with local businesses and other interested parties, and our hope is to create a plan that will benefit the whole east county area.”

It was Fairview’s first application for this grant program, Berry noted, while giving praise to Metro staff who worked on the program. “Metro has been great partner, very smooth. The process was intense, but very user-friendly, and in fact made us think about what we were really doing and what we wanted out of this plan,” Berry said.

Gladstone received $150,700 to create a master plan and implementation strategy for its downtown, with substantial community input, to pinpoint developmental challenges and opportunities facing the city of nearly 12,000.

“This project gives us the ability to have everybody in Gladstone come together and have a say in what they want to see for the future, how we’re going to get there, and identify the things that can be done ahead of time to get it all done,” said Gladstone Mayor Dominick Jacobellis.

"We see Gladstone's future being part of a string of pearls down the Willamette," Jacobellis said. “Everyone in the process is really excited. We haven’t done anything this big in a long time, but Clackamas County has helped out a ton, and the help from Metro throughout has been fantastic.”

After being selected to receive the funds, each jurisdiction works with Metro to craft an inter-governmental agreement establishing milestones tailored to each plan, with portions of the grant being dispersed at each milestone. The final milestone of every project is formal adoption of the plan by its city or county.

Read about the community planning and development grants and the locations of the 2015 recipients:

The 16 projects chosen for funding by Metro Council were:

Working with neighboring cities to craft an economic development analysis and identifying barriers to development of the Northeast Halsey Street corridor running between the cities of Fairview, Wood Village and Troutdale.

Creating master plan with community members for the development of downtown Gladstone, identifying barriers and opportunities facing the city.

Increasing the North Hillsboro area’s development-readiness by completing a series of analyses and concept plans focused on jobs and housing.

Identifying barriers to development of better-quality multi-dwelling development and healthy neighborhoods, working to improve the regulation and permitting process to make it more efficient and predictable.

Planning to create one thousand new affordable homes (for sale and rent) in the next ten years along with affordable commercial space in order to mitigate, prevent and reverse displacement in North and Northeast Portland.

Concept planning work for a mixed-use transit-oriented urban loft development along with planning for the reconfiguration of the Tigard Transit Center.

Planning potential sites for a local homeless shelter in the county, along with developing affordable housing and living wage jobs so families can swiftly leave shelter.

Developing a land use and transport concept plan built around supporting high capacity transit use while preserving and growing affordable housing and commercial spaces. 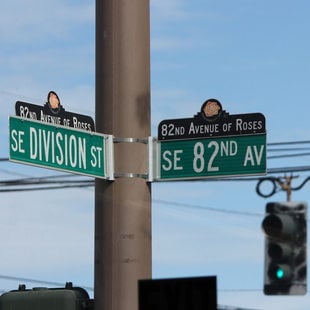