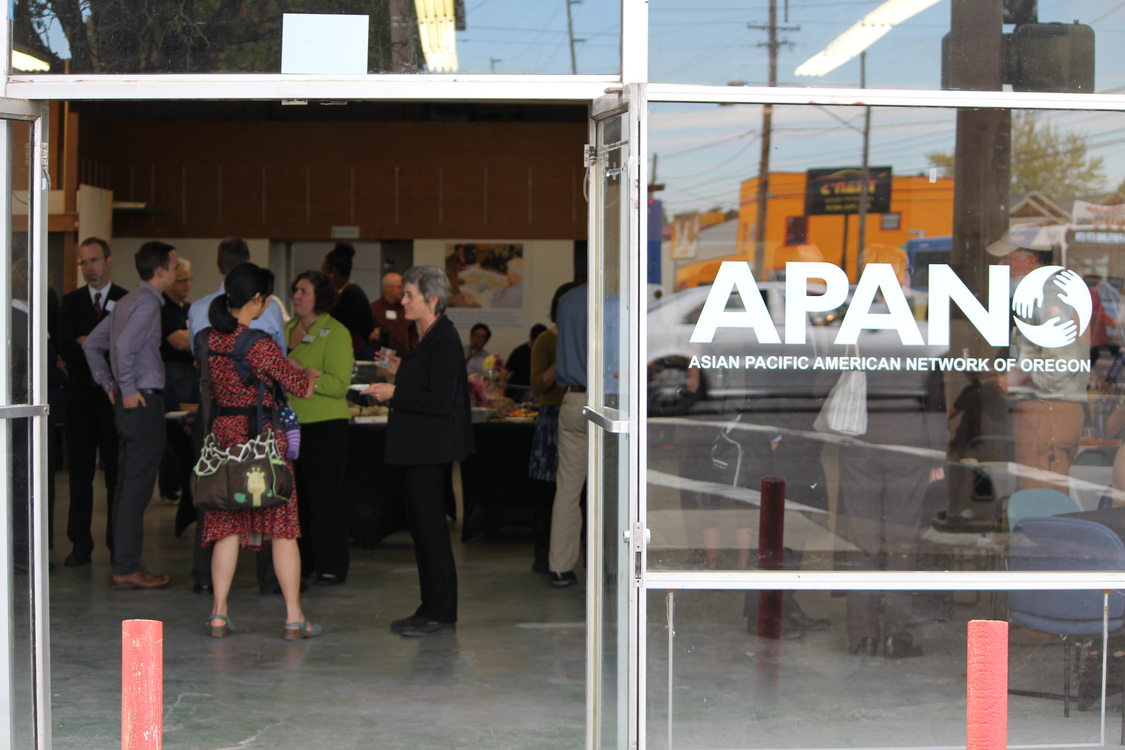 Metro Councilor Carlotta Collette (center) and other members of the council celebrated a significant milestone for the Powell-Division Transit and Development Project Thursday at the Jade/APANO Multicultural Space, a former furniture store at the corner of Southeast 82nd and Division. 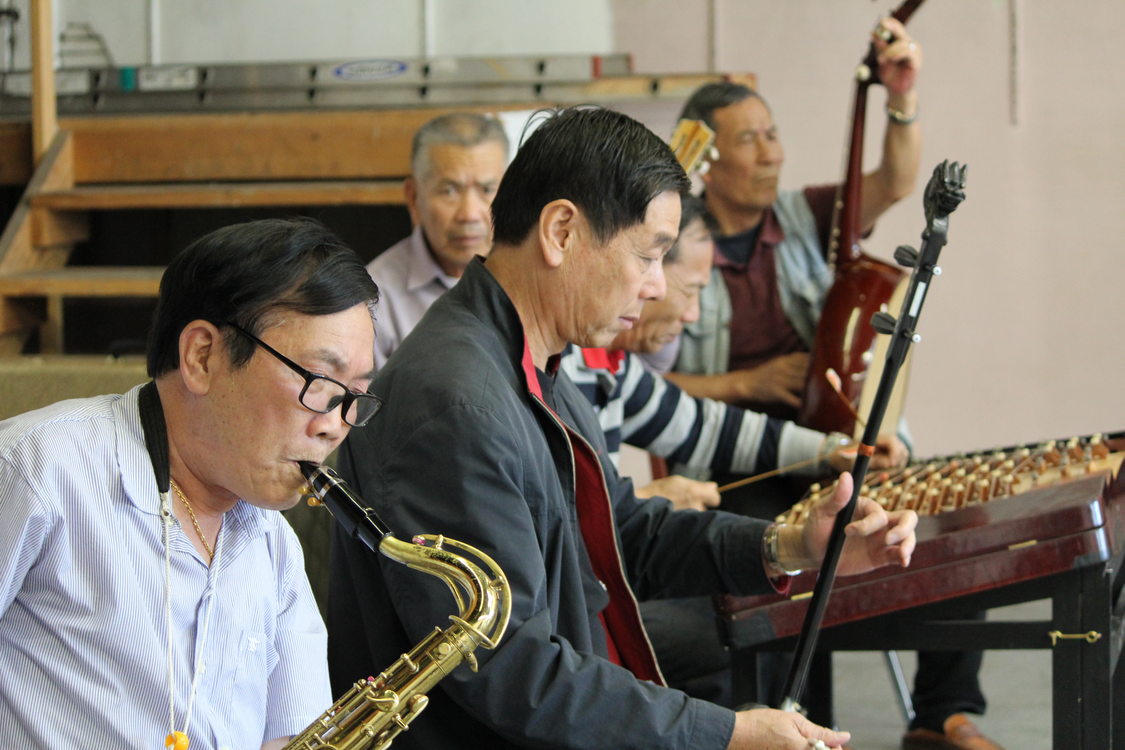 An ensemble of elders played traditional Chinese music during the reception, which featured food from local businesses in one of Oregon's most diverse neighborhoods, the Jade District. 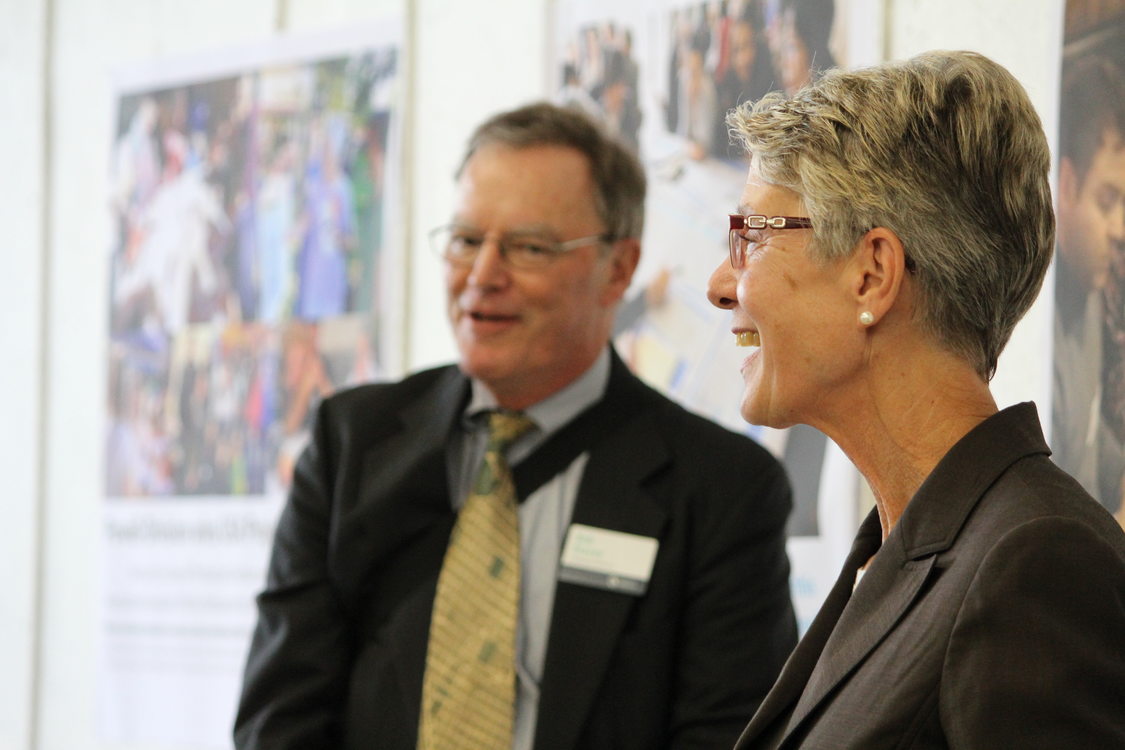 At a Metro Council meeting following the reception, Kolini Fusitua (center) told councilors that his Tongan community appreciate being engaged on the project and are looking forward to its potential, but are stil concerned about being displaced with the improvements that it is expected to bring. 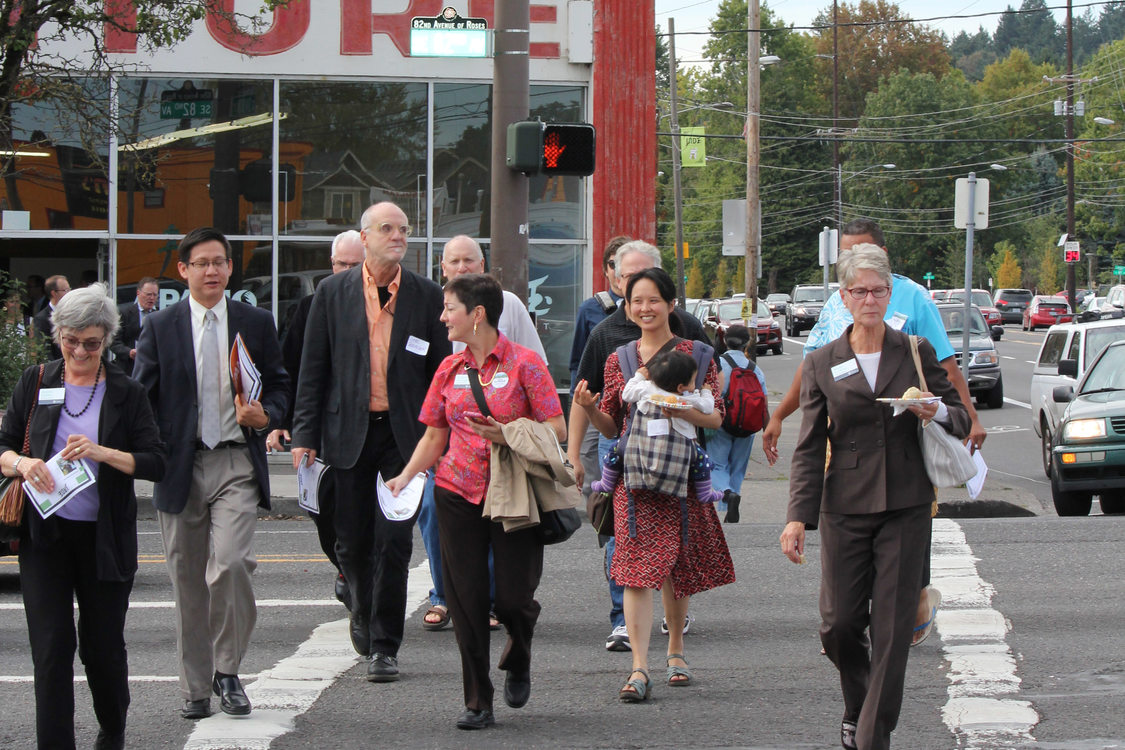 Councilors and project staff were led by community ambassadors from the Jade District, PCC and the surrounding neighborhood on a half-mile walking tour between the reception at 82nd and Division and their meeting at Harrison Park School.

A few blocks from where the Portland region's newest form of public transit could pass in a few years, the Metro Council advanced the Powell-Division Transit and Development Project at East Portland's Harrison Park School on Thursday. Councilors unanimously approved a plan to move the project into a significant new phase of design, engineering and engagement.

The project would bring a form of bus rapid transit familiar to residents of Eugene and at least a dozen other American cities but not yet found in TriMet's portfolio. The rapid bus would connect Portland and Gresham along a 15-mile corridor home to several colleges and high schools, job centers and some of the region's most diverse neighborhoods.

Today, that corridor is among the region's busiest for transit, with over 18,000 people getting on and off 9-Powell and 4-Division buses daily there.

By approving a Transit Action Plan, the Metro Council formally accepted all of the recommendations made to date by the project's steering committee and moved the project closer to entering project development status with the Federal Transit Administration. That would make it eligible to eventually apply for federal dollars for construction.

The action plan also lays out a strategy for finalizing the project's route and station locations, and furthers efforts to engage people along the corridor in shaping the project and its outcomes in the neighborhoods it serves.

There are still several major decisions to be made about the project's route – in particular, how it will connect from Powell Boulevard to Division Street in Portland and from downtown Gresham to Mount Hood Community College at its eastern end.

Entering into project development means planners and engineers from Metro, TriMet, Portland and Gresham can dig deeper into these questions with communities along the potential route. For example, project planners are gearing up for a major outreach push this fall to see where Gresham residents and business owners stand on the route options still on the table there.

Prior to the vote Thursday, project staff highlighted partnerships and extensive public engagement as keys to the project's success.

Metro, Portland and Gresham have reached out to a wide array of populations, participating in more than more than 250 public meetings, briefings and community events and engaging thousands of people, said Metro community relations specialist Dana Lucero. They have made a special effort to reach populations that don't speak English or are traditionally underserved, and have given community members voting seats on the project's steering committee.

Kolini Fusitua told the Metro Council that his Tongan community in East Portland was grateful for the outreach of the project staff. "This is new for us," he said. "It's like coming to the light."

Recognizing the project's extensive engagement, the International Association of Public Participation named the Powell-Division project its 2015 USA Project of the Year on Sept. 10.

But amid his excitement about the project's potential and his community's participatin, Fusitua voiced deep concerns about whether the transportation and livability improvements it brings might displace some in his community – as previous public investments did in Northeast Portland. "This has happened to us before," he said. "We don't want to move again."

Similar concerns were also voiced earlier in the day at a reception and tour in the Jade District, where Metro councilors, project steering committee members and local residents celebrated the project's milestone at a reception at the Jade/APANO Multicultural Space, a temporary community center in a former furniture store purchased last December by Metro's Transit-Oriented Development Program. An ensemble of elders played traditional Chinese music beside conversations inside while bus, truck and foot traffic streamed steadily past at the intersection of Southeast 82nd and Division.

Since May, the community center, known locally as JAMS, has provided a new anchor to a neighborhood revitalizing itself through local leadership and investments from the Portland Development Commission, Portland Community College, the Oregon Department of Transportation and Metro.

There's much work to do. Following the reception Metro councilors and staff walked the half-mile from JAMS to Harrison Park with several community members, crossing busy arterial roads with narrow sidewalks and traversing a dusty unpaved stretch of Southeast Clinton Street, where haphazard development is poorly served by basic urban amenities.

But they saw hopeful signs, too. A recently-installed pedestrian and bike signal gave them safe passage across Division at 87th Avenue, while business was brisk at several local markets and restaurants. Community advocate Ralph Leftwich showed off the Harrison Park Garden, the product of a community-led effort to bring healthy food options and more greenspace to the neighborhood near the school.

But Jade District manager Todd Struble pointed out that the garden and school are north of Division, requiring children and families to cross one of the city's most dangerous roads to get there. Meanwhile, no such public greenspace exists for the neighborhood south of Division.

It's just one of many things Jade District leaders are trying to resolve, along with those unpaved streets like the one councilors had just walked, Struble said. But as those improvements come, many in the community worry that they will bring higher rents that could push out the people who have made the neighborhood distinct.

And for every issue Jade District leaders raised, neighborhoods all along the route in East Portland and Gresham voice similar concerns.

In her presentation to the Metro Council, engagement specialist Lucero said the project had sought from the beginning to address these concerns head-on along with the transit decisions. Equity was identified by the steering committee as one of four project goals, she said, and the project has also convened special work groups to identify strategies to combat displacement while propelling economic development and improvements near transit stations. Such efforts "expanded the values brought to bear on the decision-making projcess," she said.

Portland and Gresham have each developed their own local action plans seeking to thread that needle, Portland Bureau of Transportation director Leah Treat told the Metro Council.

Six of the eight goals in Portland's plan – which will be considered by its city council this winter – were particularly shaped by community input, Treat said, including specifically calling out anti-displacement, affordable housing and community involvement. Gresham's plan has similar language.

Earlier in the meeting, the council awarded nearly $1.5 million to Portland and Gresham to advance their local planning efforts, part of more than $4.7 million in 16 community planning and development grants awarded to jurisdictions around the region.

Reflecting on the Powell-Division project so far, councilors focused on successes but also the key challenge of affordability – an especially potent concern in a time when housing prices are surging throughout the region, including East Portland and Gresham communities, which have long been more affordable.

"This is a great project and it's great to move it forward, but we would not be serving your comments well if we assumed that the hard part is over," said Metro Council President Tom Hughes, addressing Fusitua and Treat. "The question before us is, can we raise the quality of life…and still retain affordability? That's a conundrum for us."

"The comments I have heard (from people in the corridor) are not that they don't want the project but that it meets their needs," said Metro Councilor Shirley Craddick, who represents the eastern half of the corridor and co-chairs the project's steering committee with Councilor Bob Stacey. She cited concerns like pedestrian safety, housing affordability and good transit connections.

For his part, Stacey said he was eager to move forward. "So far, so good, and I'm looking forward to even more innovative and creative thinking ahead," he said.

Metro investment areas manager Malu Wilkinson said the project steering committee is expected to select a final route and station locations for the project in the spring. That plan, called a "locally preferred alternative," would then be considered by the project partners before final adoption by the Metro Council. If federal funding can be obtained, project planners say the line could be complete as soon as 2020.