The story of a place where people, culture and opportunity intersect. 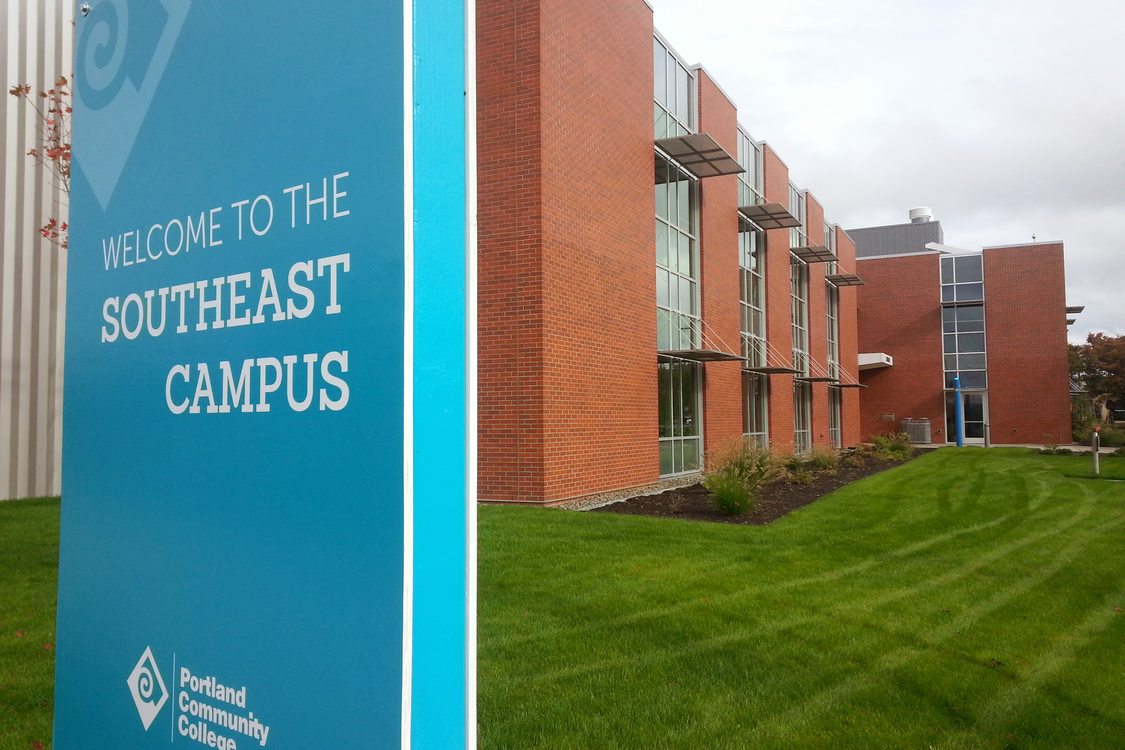 After a flurry of bond-funded construction, leaders celebrated the grand opening of PCC's Southeast Campus in October. Now they're getting ready for major growth amid one of the region's most diverse neighborhoods. 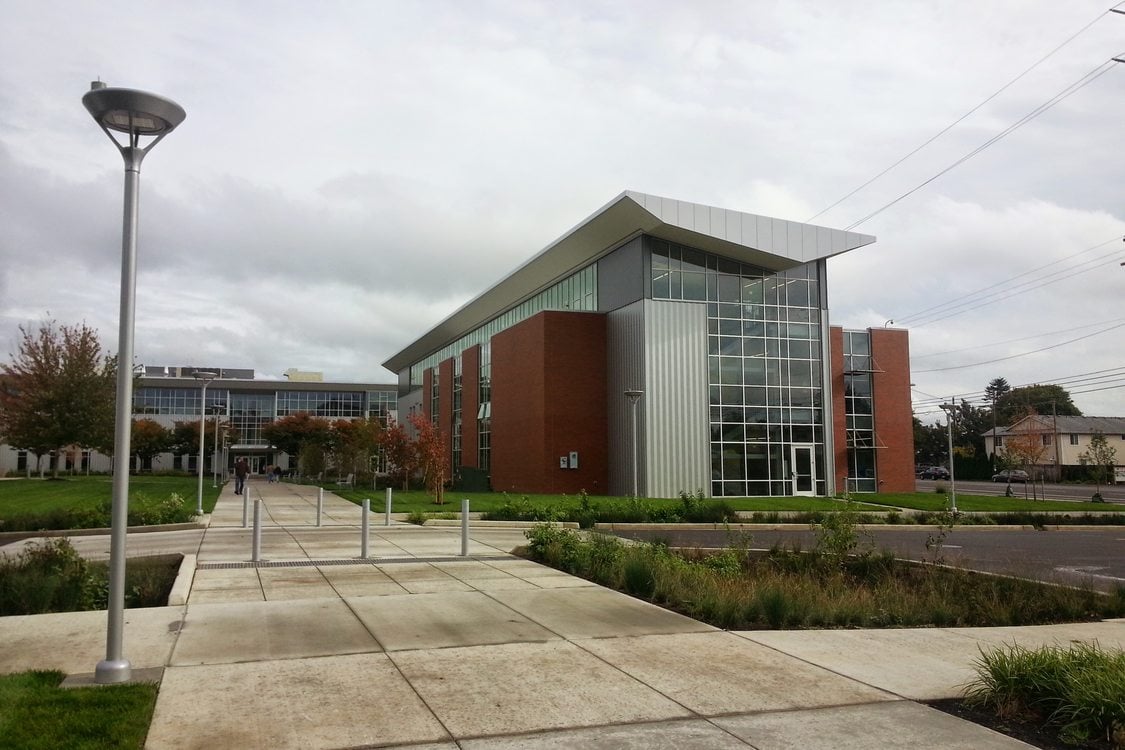 Among the jewels of PCC Southeast are a brand-new library and student commons building, which cluster around renovated older classroom space. 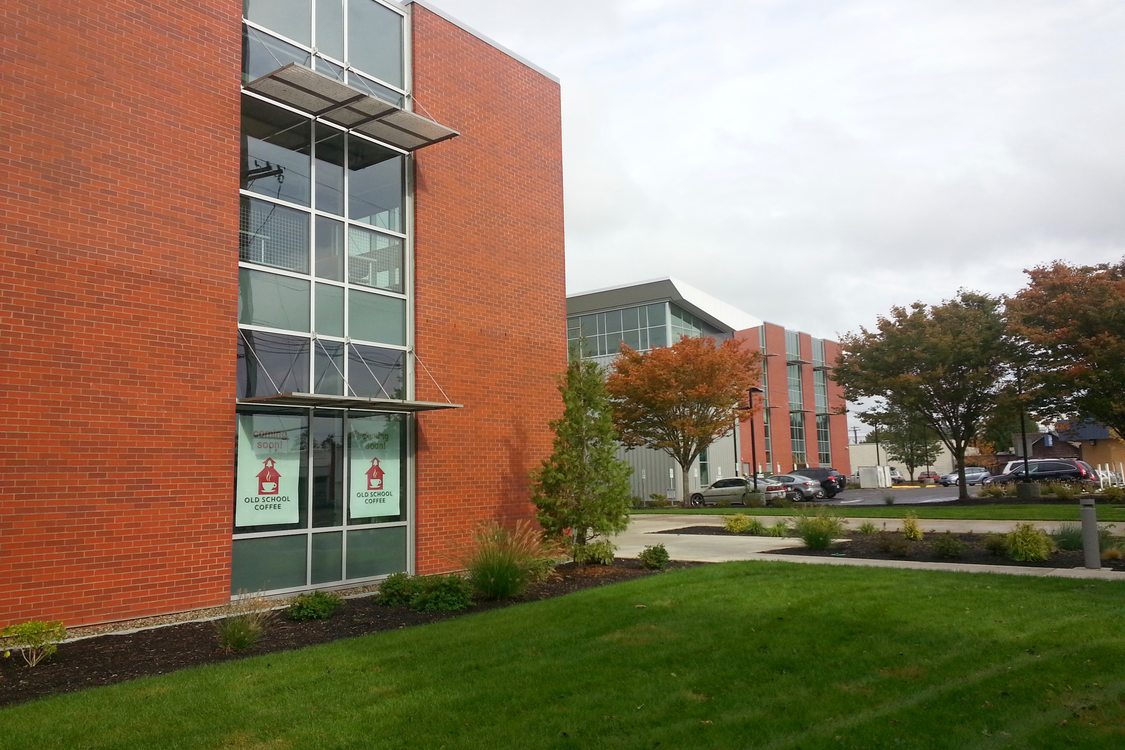 PCC also tried to include things to serve the larger community at the Southeast Campus, including a locally owned coffeeshop in the new library building.

That investment has helped elevate PCC's presence in southeast Portland from a "center" to a full campus. PCC celebrated the grand opening of the Southeast Campus on Oct. 18, 2014, wrapping up roughly $100 million in land acquisition and $45 million in capital improvements at 82nd Avenue and Division Street.

With the construction dust covered by fresh sod and newly-planted trees showing their first autumn color, PCC Southeast exudes opportunity in the middle of one of the region's most diverse neighborhoods.  A new library and student commons building cluster around the renovated Mount Tabor Hall and the distinctive "1911 Building," originally built by the German American Society as Altenheim, a retirement home for German Americans.

"We are projecting a pretty significant increase in enrollment," said PCC Southeast president Jessica Howard. "Part of that has a transportation angle."Thousands of students and hundreds of staff come here every day, and their ranks are growing.

Now, PCC leaders say, they hope the region will build on its campus investment with a commitment to getting people there more safely and efficiently. With limited parking on-site and a diverse population coming from all over throughout the day and evening, the college is looking to better transit as a key part of its way forward.

They're pinning a lot of hope on the Powell-Division Transit and Development Project – the region's first bus rapid transit project, which could pass PCC Southeast on either 82nd or Division. Service could begin as soon as 2020.

Enrollment at PCC doesn't look like enrollment at other colleges, notes community relations manager Christine Egan. There are thousands of students working for their associate degrees, of course, but there are also people coming for community education courses in everything from cooking to Italian, people seeking certifications or driver's education training, and more. Many students have day jobs and/or families and can only take classes in the evening. Many are taking simultaneous classes at multiple campuses, including PCC's other three campuses and numerous centers.

So counting who comes to PCC Southeast is difficult. But the campus counts about 11,350 in its "head count" of students, along with more than 550 staff and faculty – easily making it one of the most significant destinations in southeast Portland.

According to a recent analysis, half the campus's students come from just seven ZIP codes, stretched along the Powell-Division corridor from the river to Portland's eastern limits or clustered around the Gateway district.

The campus is a touchstone of diversity for PCC, which is already the most diverse higher education institution in Oregon. More than 80 languages are spoken at Southeast, and the campus' ethnic diversity is far greater than the region as a whole, Egan said. 11.6 percent of students at PCC Southeast identify as African American, 11.5 percent as Asian or Pacific Islander and 9.6 percent as Hispanic.

PCC Southeast already has the highest rate of bus commuting among PCC's four campuses – the corner of 82nd and Division is among the region's busiest bus crossings, with nearly 3,400 people getting on and off the 4-Division and 72-82nd Ave. buses there every weekday.

But many students are unhappy with current bus service, said Lishao Chen, a student leader in her final year at PCC.

Chen lives near Powell Boulevard and 77th Avenue. She sometimes takes the bus, but said it's not always a good experience. Buses don't come as frequently as she'd like – especially at night, when many stops are dark and don't feel completely safe. Getting places can take a long time if the bus makes a lot of stops; but at less crowded times she has missed buses that get ahead of schedule.

Additionally, getting to the bus stop sometimes means making a dangerous crossing of busy roads like Powell, Division or 82nd.

"Sometimes people see the bus coming and they run to get to the stop," Chen said, adding that she hopes planners will consider safety when they build a new transit line.

Miriam Budner, coordinator of PCC's community education arts program, hears similar things from instructors and students in the college's scores of arts classes district-wide. A regular bicycle commuter from her home in Portland's Sunnyside neighborhood to PCC Southeast, Budner says transit is important to the thousands of community education students throughout the region, who run the gamut of lifestyles and demographics.

But Budner also hears negative comments from students, instructors and colleagues about their transit experience.

"The timing isn't always great, it's slow and it doesn't always go from or to the places they want to go," she said.

PCC leaders hope that the Powell-Division project will do more than provide faster connections for students. They also hope it improves the experience of transit, Howard said. "Anything that will bring qualitative difference is important to us because it's important to students," she said.

At a meeting on Sept. 29, 2014, several Powell-Division project steering committee members, including Howard, highlighted the project's significance as an "education corridor." Depending on its final alignment, the project could link several major institutions, from Mt. Hood Community College in Gresham to Portland State University in downtown Portland, with some sort of bus rapid transit.

PCC Southeast sits squarely in the middle of that corridor. And campus leaders have noticed.

The project actually links two PCC facilities: the Southeast Campus and the CLIMB Center, a continuing education facility near OMSI. Students and staff often need to travel between facilities, Howard said. There are other facilities along the route where PCC community education classes are held, and several high schools whose students take "head start" courses at PCC.

Additionally, many community college students make a quick leap to a four-year university after two years. Portland State is a common next step for PCC students. According to PSU transportation director Ian Stude, roughly 1,500 new students last year at PSU had previously gone to a PCC campus.

And then there are students who are "co-enrolled" at PSU and PCC – taking classes at both simultaneously. According to Stude, there are about 3,300 students in that category this year.

Though that figure includes students from all of PCC's campuses, PCC leaders say it reinforces a key goal of community college education: to link to opportunities well beyond PCC's campus.

"The fact that you can get from [downtown] to this campus more easily is huge for us to be able to springboard from one opportunity to the next for students," Howard said.

Changes to the neighborhood

High-capacity transit investment tends to bring economic development along with it. This can mean positive changes, like vacant lots replaced with new construction, more businesses and jobs within walking distance, and so on. But it also carries the threat of displacement for existing residents who can't keep up with rising rents.

The Powell-Division project is not shying from these concerns. In fact, equity has been a central part of the process since it began; in June, the project steering committee selected equity among the project's four key goals. An equity-focused work group had its first meeting in September and will inform the project moving forward, particularly as Metro and planners from Portland and Gresham begin "station area plans" to link land use with potential transit stops.

There are certainly some things many people would like to see changed around PCC Southeast: shuttered stores, used-car lots and adult businesses are common along its stretch of 82nd Avenue.

But so are bustling Chinese, Vietnamese and Korean restaurants and markets, characteristic of a neighborhood with one of the region's highest concentrations of Asian Americans. Indeed, 82nd and Division is the heart of the Jade District, a community-led effort to build a walkable "regional cultural district" that celebrates and builds on the neighborhood's rich diversity. Egan represents PCC on the steering committee for the Jade District, which is administered by the non-profit Asian Pacific American Network of Oregon.

Like many in the neighborhood and throughout the Powell-Division corridor, PCC is trying to walk a fine line between improvement and displacement.

"While you want [the neighborhood] to improve and get better, you don't want to lose its diversity and richness," Howard said.

Howard believes that PCC has a major role to play in improving opportunity for the people who currently live in its neighborhood – and she thinks the Powell-Division project can help.

"I hope it will help this campus serve the community better by linking students to us, and allowing us to reach back out into the community in a way that's faster, better, safer and more viable," she said.

Metro's Drive Less Save More program has students at PCC Southeast learning new ways of getting to school and around the region.

The history of 82nd Avenue as a major highway is molding its uncertain future, with local stakeholders and ODOT now working together to decide what kind of road they want to see in years to come -- something befitting its modern usages and the desires of residents to have a safer street running through their communities.