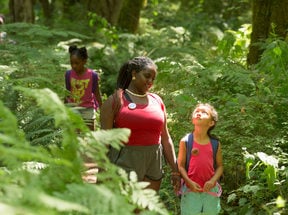 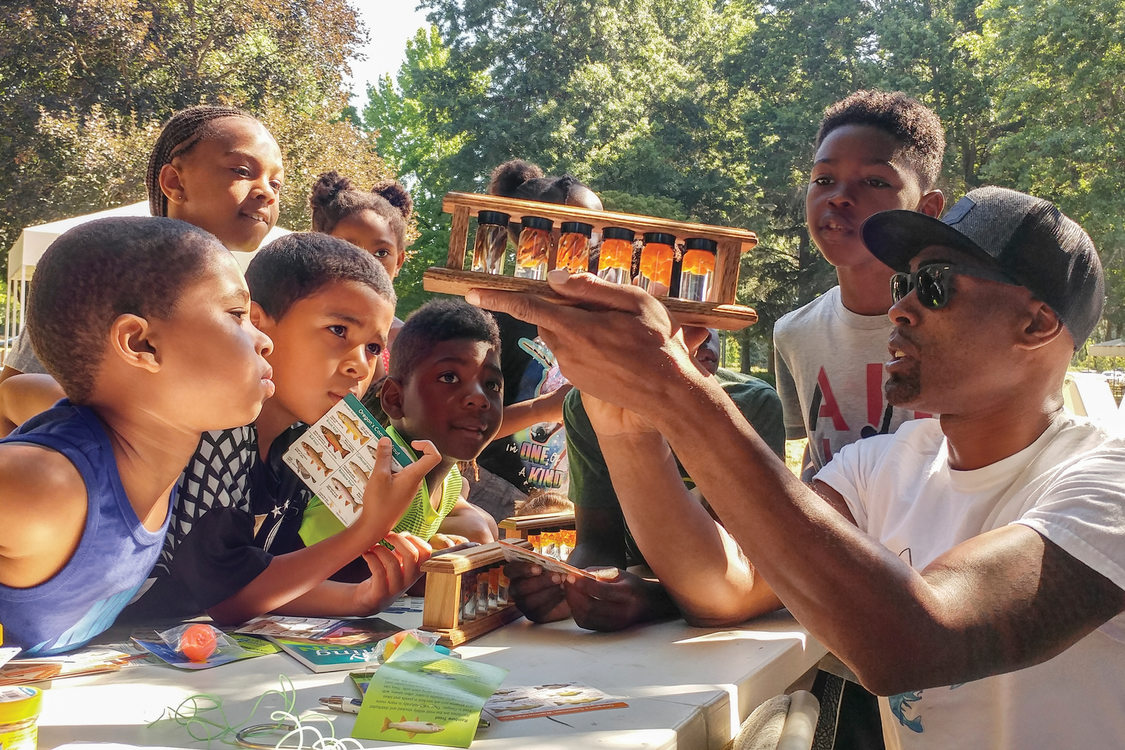 Dishaun Berry of Get Hooked teaches campers from Camp ELSO about the life stages of fish at Blue Lake Regional Park.

Dishaun Berry of Get Hooked teaches campers from Camp ELSO about the life stages of fish at Blue Lake Regional Park. 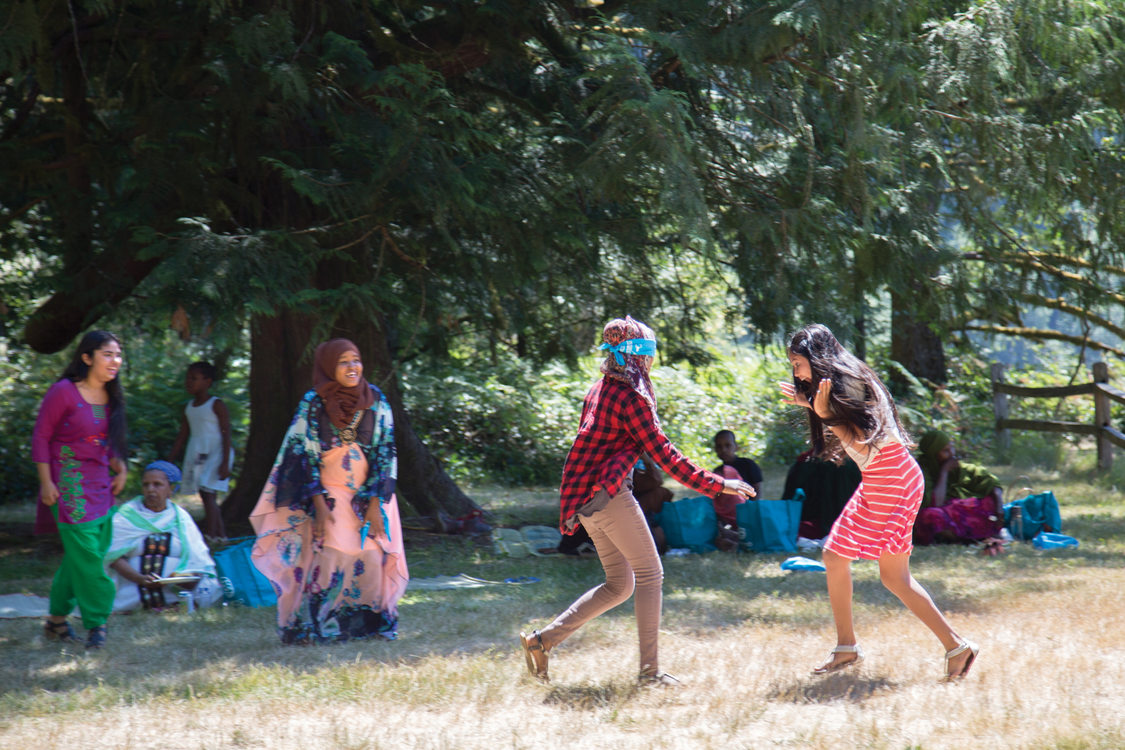 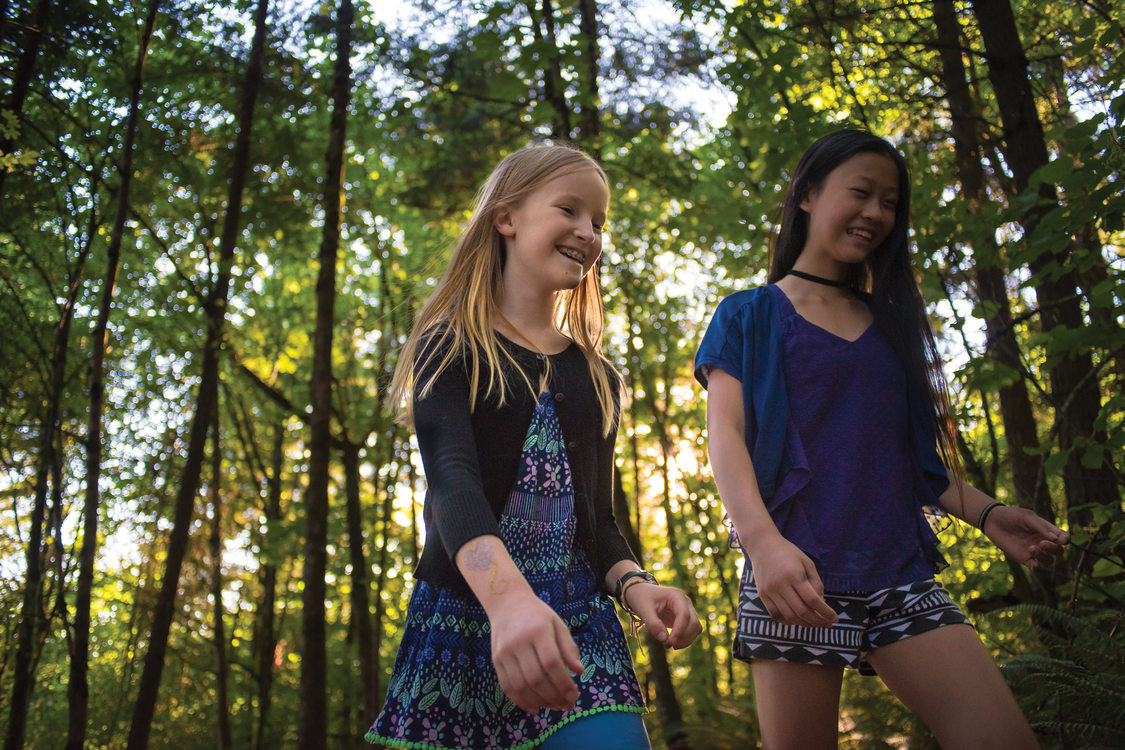 In summer 2017, two buses pulled up to the Coho picnic shelter at Oxbow Regional Park. About 150 people, mostly moms and kids, mostly immigrants and refugees from Africa and a few from Nepal, piled out of the buses and into the sunshine and piney air. They were all people served by IRCO, the Immigrant and Refugee Community Organization, which had teamed up with Metro to host a picnic. The day was hot, but there was shade under the Douglas firs and barbecued hot dogs and chicken, rice, salad, samosas and other fried goodies to dig into.

For IRCO, the event offered their clients a few hours to sit in the grass, lounge in the sun, watch the Sandy River – to enjoy a dose of nature therapy. For Metro, the event allowed staff to welcome these new community members to a place they’d never been, to make it clear that Oxbow is not only open to them but that it also belongs to them.

It’s an idea that many people in greater Portland take for granted, but one that many people of color and immigrants might not assume unless someone reaches out and says, “You’re welcome here. This is your place.”

Efforts like this have slowly become more common at Metro parks and natural areas.

This fall, Metro is releasing the Parks and Nature Racial Equity, Diversity and Inclusion Action Plan. The plan brings together Metro’s work to protect clean air and water and connect people to nature with its commitments to improve racial equity in the region. The document sets down dozens of specific actions Metro will undertake over the next five years to increase racial equity, diversity and inclusion in its parks and nature work.

For Metro, racial equity means that race would no longer be a reliable way to predict a person’s life outcomes on measurements like education level, health or wealth, which are currently very closely related to race. In the process of creating racial equity, every group and community in greater Portland would see its well-being improve.

“It’s important work that we have to take on individually and collectively,” said Jonathan Blasher, director of Metro’s Parks and Nature Department. “What gets me excited is seeing the small successes people have… People see that this isn’t some big magical or mystical work. It’s about treating people with respect and integrity and acknowledging historic wrongs.”

This means making sure that people of color feel welcome and safe when they visit Metro destinations. It means creating job training and mentoring for people of color so that the department’s workforce looks like the people it serves, which isn’t true now. It means that Native Americans, both those with close historical ties to the region and those with tribal roots in other parts of the country, will have meaningful and easier access to cultural resources on Metro properties, all of which are land ceded by regional tribes in the early years of colonization.

Through these and other efforts, Metro hopes that more people of color will gain the benefits of parks and natural areas.

While the racial equity plan is new, Metro in recent years launched several programs with a focus on racial equity.

One example is Connect with Nature. As part of planning for the future East Council Creek and Gabbert Butte parks, Metro wants to hear from people who are often left out of the open houses and processes where community members influence the plans of park builders. So along with offering the usual ways for the public input, Metro worked with community organizations to bring people of color, many of them immigrants and refugees, to a set of workshops where they helped shape these future parks. For many of the participants, it was the first time they’d been part of a government decision process, and they felt empowered to get involved in more.

Connect with Nature is now being turned into a toolkit for other park providers to use when they create a new green space.

The racial equity action plan takes examples like Connect with Nature and finds how their lessons, spirit or outcomes can be applied throughout the department. This is important because racial equity at Metro’s parks and natural areas isn’t something that can be achieved with a project here and a project there. It requires the entire department to work together.

And that’s what it took to create this plan. Over about 18 months, more than a quarter of the parks and nature staff were involved in developing it. That led to a plan that connected very closely to day-to-day work. Staff members were also greatly influenced by input from community members, whether from workaday interactions or through listening sessions hosted by Metro.

While the plan offers a path to achieving greater equity, it’s just a start. “It’s an ongoing, unfolding process,” said Sheilagh Diez, the community partnerships project manager in parks and nature. “The more we change, the more we shift the way we do things, the more we will uncover what we need to be doing.”

Learn more about racial equity work in parks and nature

Find out more about the racial equity work across Metro

The new Oxbow Regional Park welcome center is the first of its kind on a Metro property and will serve as a hub for the park. It’s a first stop for visitors to get oriented with maps and general park information, and the center’s educational elements are designed to spark visitors’ curiosity about nature.