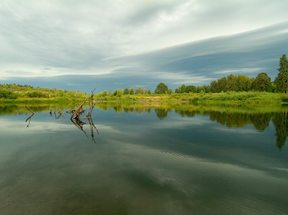 Explore great places and more in Our Big Backyard magazine

A whitetail dragonfly flitted about, dancing and weaving through waist-high grasses.

Decades of gravel mining and devastating floodwaters in 1996 changed the course of the Clackamas River and left their mark on River Island, a 240-acre natural area just upstream from Barton Park. Metro acquired the main part of the site in 1999 and added to it over the years. This past summer, work began on a two-year, large-scale restoration effort that will return River Island to a natural, wilder existence and help improve water quality in a river that provides drinking water to nearly 400,000 people.

In July, work began on the south side of the river to remove concrete and asphalt on the riverbank, create essential habitat for fish and decommission two sections of gravel roads close to the river.

“This restoration project will not only benefit  fish and wildlife, but also people,” said Brian Vaughn, a senior natural resources scientist at Metro who is leading the River Island restoration project. “Fish need logs and boulders and places to hide to get away from predators and to find food and shelter. The river is also a scenic corridor, and rafters and boaters who use this section of the river will see an improved shoreline and healthy riparian forest.”

Restoration work on the south shore will continue over the winter with the planting of native trees and shrubs. In summer 2016, crews will begin to restore the natural area  on the north side of the river.

But within a few, swift hours in early February 1996, record floodwaters bulldozed their way through the site, cut off a meander of the river, inundated a series of gravel pits and swept away large swathes of the banks.

When the water finally receded at River Island, the Clackamas River had lost two-thirds of a mile, taken out almost nine acres of land and eroded 138,000 cubic yards of gravel – 13,800 dump trucks’ worth.

Charlie Christensen’s family has owned the 65-acre farm next to River Island’s south portion for decades. At the height of the flooding, he walked over to the River Island gravel property and stood on a ledge to take photos of the swollen river.

“It was just about the highest point of the water, and it was tearing the old office building apart,” he said. “The foundation was being undermined, and the building itself was falling into the river. I was totally in awe of the power of the river.”

“The next day, I went back, and another 50 feet of that bank was gone. I was just so lucky that it didn’t fall down when I was standing on it.”

Starting in 1999, Metro began acquiring land in the area with money from the 1995 and 2006 natural areas bond measures.

Over the years, crews treated invasive weeds and stabilized the site. With the parks and natural areas levy that voters approved in 2013, money became available to implement a large-scale restoration project that would make a big difference.

“I think overall the community is in support, particularly where it restores in a less intrusive manner and helps to allow nature to restore itself,” said Cheryl McGinnis, executive director of the Clackamas River Basin Council. “There’s some caution related to how it’s going to be done, but I think all of those questions have been answered in community meetings.”

In July, two excavators roared on the riverbank as they plucked out giant chunks of asphalt from the ground.

In the following weeks, crews placed 460 logs – 170 of them still with giant rootwads still attached -- on the banks and in the water to restore a side channel and create habitat for Chinook and coho salmon and winter steelhead. Gravel roads were decommissioned and culverts removed, allowing fish easier passage to a backwater alcove area.

“It offers rearing habitat for fish as they migrate to upstream habitats,” McGinnis said. “That off-channel habitat provides protection and moderate stream temperatures, so in the winter it’s warmer than the main stem and more fish-friendly, as well as in the summer months, it has a cooling factor.”

The habitat improvements also help people by reconnecting floodplains that absorb water during winter storms rather than sending them coursing downstream to flood homes.

Bob Toman has been a fishing guide on the Clackamas River for 48 years and caught his first steelhead there 60 years ago when he was 6. He has lived on the river for nearly 40 years, just downstream from River Island.

The River Island restoration plays an important role in the larger revival of the river, especially in conjunction with other nearby restoration projects in the past six or seven years, Toman said.

“Even though this is just a minor step in the rebuilding of the whole, complete river, it’s an important step to keep progress going,” Toman said. “It’s very important that we do something. This, combined with the other projects that have been done, is showing a somewhat aggressive move towards rebuilding the river back the way it was once before.”

To find the latest parks and nature events, classes and news, pick up the summer issue of Our Big Backyard magazine that's out now.

Submit a photo taken at a park or natural area in the Portland metro region for a chance to win.