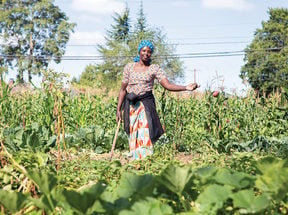 Pamela Slaughter, on the left, leads a visualization activity during a People of Color Outdoors event.

In this article, Pamela Slaughter details her love of the outdoors and the anti-Black racism she has experienced in Oregon. It includes a racial slur that was used against her and her family. The word is published with an alteration made by the author.

Pamela is the founder of People of Color Outdoors. She recently published her first children’s book, “Hi! My Name is Robin!”

I’ve known since childhood that we can’t live a full experience as humans if we don’t spend time in nature. I loved the outdoors as a child, and when I was 10, three things happened to solidify that love. The first was my Uncle John moved to a small farm outside of Portland. I remember jumping from the hayloft into the hay, catching frogs at the pond, and sitting for hours in a big tree reading or watching wildlife. Sometimes he put me to work milking the goats, feeding the chickens and collecting eggs.

Caring for the animals gave me a sense of confidence and competence. Exploring the pond enhanced my sense of adventure. Learning to identify and understand plants, frogs, crayfish, insects, the many waterfowl and other birds made me feel like my world was a big and interesting place.

The second thing to happen that year was I went to Camp Westwind, my first overnight camp. The camp is located on a peninsula. It’s bordered by the Pacific Ocean on one side, the Salmon River on another side and an old-growth forest on the last. It’s still one of my favorite places.

We took a ferry across the Salmon River to reach the camp. It was my first time being on a ferry, and I was enthralled by the fish and crabs I could see in the clear water. My cabin was surrounded by beautiful trees. Out its door, a path led to a bluff overlooking the ocean.

I was 10 years old and obsessed with Harriet Tubman. I thought about her often, especially at night. On the first night of camp, I decided to see if I could find the Salmon River, which was north of my cabin, by using the North Star and feeling the moss on the trees the way Harriet Tubman did. I slipped out of the cabin when the other girls went to sleep. There were no lights, so I was navigating by the moon and stars, just like Harriet.

I quickly realized there was moss on all sides of every tree. I also realized I didn’t know which star was the North Star. There seemed to be thousands more stars at camp, and they were all incredibly bright. I ended up wandering up to the bluff where I admired the velvety sparkling sky, watched the rhythm of the white-tipped, crashing waves, breathed the salt air, listened to the owls, and created stories about the sounds I was hearing all around me. It was magical and fed my imagination and curiosity and filled me with a sense of freedom.

The third thing was visiting my mother’s family in her hometown, Chicago. I spent much of my time in Chicago feeling stunned and disturbed. There were buildings so tall I couldn’t see their tops, even with my head thrown back. I missed the woods. My favorite time in Chicago was spent in my Aunt Dorothy’s backyard, watching the squirrels.

When we returned, I biked to a nearby wooded area. A weight rolled off me when I heard the alarm calls made by birds that spotted me. By the time I reached my favorite tree and climbed it to read, I felt light enough to float away. I was only 10, but I realized I needed the woods to feel good and be happy. I remember sitting in my tree feeling sorry for people who didn’t know they were missing the best part of life.

My mother and grandparents moved to Portland from Chicago during World War II and lived in Vanport, the town made overnight to house new arrivals who were building Liberty ships. During the war and then for a few years after, it was one of the only areas in the region Black people were allowed to live. In 1948, the levy holding out Smith Lake broke, destroying the town in an instant. My family lost everything in the flood and couldn’t afford to return to Chicago.

They made their home in Portland and fell in love with Oregon’s beauty. I have memories of grandparents, great grandparents, my seven aunts and uncles and any of our frequent visitors from Chicago caravanning it to the country or ocean. We would enjoy the river, hike trails, go fishing and have picnics.

I did come to understand that some white people didn’t like us because we were Black. Once, we were at the State Fair and a young girl pointed at us and told her mother to look at the n*ggers. Her mortified mother slapped her in the face, hard, and told her to never use that word. My grandmother told the woman that the one who needed a hard slap in the face was the adult who taught the child that word. The woman grabbed her crying daughter and rushed away.

I became aware of racists at the fair, but as far as my childself knew, we never had another negative encounter. Still, as an adult, after I began to see what a child is often protected from, I realized that we may have traveled in those large caravans for safety.

I found that the older I got the less my Black friends wanted to join me outdoors. As an adult, only my white friends loved being outdoors. Many of my Black friends shared stories of verbal or even physical attacks or threats. Sometimes they just didn’t want to be stared at.

I don’t judge Black people for avoiding the outdoors. I have.

When I became a mother, I wanted my children to have the same relationship with nature I did. I had had occasional encounters with racists and skinheads on the trail. But after one hateful altercation on a hike with my young children, I was left shaken and felt irresponsible for bringing them. That ended our family hikes.

We had thought of ourselves as explorers, free to pick a trail, pack food, water and our journals before setting out to discover something beautiful and exciting. We did, every time. It might be the first patch of trillium on an early spring day. A bald eagle with a wiggling fish in its talons. A log almost completely covered with small garter snakes enjoying the sun on a warm day.

Our legacy as explorers was done, preserved through our journals. We began our new legacy as family-camp members, environmental students and volunteer land stewards. We were usually the only Black people present, but I felt safe in those structured environments.

Years later, I walked into a school with my 10-year-old grandson to drop him off for camp. The room was full of rambunctious children excited for their adventures. We heard a big crash followed by utter silence. Then, a child said, “Don’t worry! We’ll just say that the Brown boy did it.” They all agreed, as we stood there in the hallway, listening.

But I refused to allow the outdoors to be taken from us.

From his birth, I had been reclaiming space in the outdoors, for him, for me, for us. When he was a baby, I put a crib outside so he could be with me as I gardened. When he was three, I started going on walks with him and his two best friends, who are his first cousins. When they were nine, we took the first of our now-annual road trips together. They are 15 now, quickly becoming Black men. From the garden to today, I’ve instilled in them that nature is there to help them heal and thrive.

We enjoyed our time together, but we were consistently the only Black people on the Wahkiakum ferry, hiking at Opal Creek, bird watching at Oaks Bottom, riding the jetboat in Hells Canyon. Wherever we went, white people wanted to know what we were doing there, but their questions were never that direct. What program did I work for? What school were we from? What group did we represent?

I would respond we were a family enjoying time outdoors. I would point out a large white family and ask, “Now that’s a big group. What program do you suppose they’re with?” Most people understood my point. I regularly had to assure the boys it was OK for us to enjoy nature, too.

I felt desperate to go outdoors with people who welcomed me. One day, I googled “Black people hiking together.” I discovered Outdoor Afro, founded by Rue Mapp. I wrote her and soon began Outdoor Afro Portland. It was wonderful. My Outdoor Afro training was at the U.S. Fish & Wildlife Service National Conservation Training Center, an absolutely beautiful campus on 533 acres in rural Virginia. I learned how to lead events safely while creating community. I was there along with Black leaders representing 33 other states.

I returned energized and excited to share Oregon’s beauty. My monthly events were popular. It was a lot of fun, but a lot of work. After two years, I needed a break.

One of my members, Rikeem Sholes, repeatedly asked me to start another group. He finally offered to host all the events until I was ready to return.

As I imagined a new organization, I thought about the many people of color who were not Black who had joined or wanted to join Outdoor Afro. There was a clear need for an organization that brought people of color together in nature. I took Rikeem up on his offer and started People of Color Outdoors in July 2017. The group attracted people of all colors, ages, nationalities and socioeconomic backgrounds. What they all have in common is a desire to enjoy nature and feel safe, with other people of color.

People of Color Outdoors is now a nonprofit. We’ve hosted over 100 events, including hiking, trail running, biking, canoeing, fishing, bird watching and rock climbing. We’ve had poetry walks, experienced forest bathing, done a mindfulness walk, held vision board parties and hosted potlucks. Our outings are joyous. We have a caring community where we can all literally exhale, and just be. A big goal for People of Color Outdoors is to purchase land and build a retreat center that will also benefit the local community.

As we build to that, I enjoy this wonderful community that I used to only dream of.

Audience research shows readers dig Our Big Backyard, but it's not reaching a diverse audience.