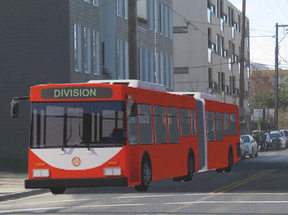 What to know about a rapid bus on inner SE Division Street. Add your thoughts.

5 things to know
Questions and answers
Voices from the street

How would bus rapid transit look on inner Division Street in Southeast Portland? Why not do other alternatives? Get answers to your questions here.

Where would a Division route go?

It could follow the same route between Downtown Portland and Gresham Transit Center as today's 4-Division.

What changes would I see on inner Division?

Possible improvements to bus service include longer buses, upgraded bus stations and coordinated traffic signals to reduce delays. With new 60-foot-long articulated buses, riders would board through three doors, speeding up boarding. The new buses carry 60 percent more riders and would eliminate the current problem of people getting passed by a full bus while waiting at a stop. The buses would also have capacity to meet future ridership demand. With fewer stops and traffic signal priority, service would be quicker and more reliable, making it a more attractive travel option.

Why not run the Line 4-Division more frequently or do an express bus instead?

If the frequency of the Line 4 was increased (meaning more buses per hour), it would add more congestion to this busy corridor and further slow travel on Division for everyone. Converting the Line-4 to an express route with fewer stops could improve travel times during off-peak times, but would not provide enough capacity to meet the demand for the service. The express bus would also be slowed by riders trying to board an already-crowded bus.

How much faster will it be?

With fewer stops, faster boarding and better travel through traffic signals, a trip is estimated to be about 15 to 20 percent faster than a current trip on Line 4-Division. It will also be more reliable, allowing riders to get to their destinations on time.

Wasn’t this supposed to run on inner Powell Boulevard and 82nd Avenue?

Powell and 82nd do not appear to be candidates for high capacity transit in the near term because of current/future traffic levels and potential private property impacts. Powell Blvd and 82nd Ave are priorities for public investments that make the streets and sidewalks safer. Portland, the Oregon Department of Transportation, TriMet and Metro are crafting a strategy for improvements along Powell and 82nd.

What does a Division route mean for the potential to improve transit on Powell Boulevard?

ODOT has begun a multi-year project to make pedestrian safety improvements along Powell that will help riders access the Line 9-Powell route. Transit improvements to the 9-Powell service are currently under discussion.

Most riders – 74 percent – would get on or off at the same stop as they do now. The remaining 26 percent of riders would have to travel between 2 and 4 blocks further once on Division.

TriMet will work closely with its Committee on Accessible Transportation, which provides guidance on accessibility issues for seniors and people with disabilities.

What will this do to traffic on inner Division?

How would the proposed project impact traffic congestion at Southeast 11th and 12th avenues and Division?

Traffic congestion at SE 11th and 12th avenues is caused by both vehicles and Union Pacific train travel in the area. The Line 4-Division experiences those same delays. This project would look at ways to get the bus through the congestion more quickly.

Will I get stuck behind the bus more often when I am trying to drive or bike down Division?

Buses would stop less often, approximately every 7 blocks compared to today's bus that stops every 2 to 3 blocks.

Vehicles would have multiple doors, so people can get on and off more quickly. That means less time behind stopped buses.

How will on-street parking be affected?

Parking is an important consideration. This new bus would mostly operate within the existing roadway. Design would begin in 2017 and all efforts will be made to not impact parking. TriMet will work closely with businesses and residents.

How will a longer bus fit on inner Division?

The new buses would be no wider than current buses. The new 60-foot articulated buses are 20 feet longer and with an additional door for faster boarding. The new buses have a better turning radius because articulated buses bend in the middle. Update: In August 2016, TriMet and Metro partnered with C-TRAN to test one of its new Vine buses on inner Division. A video is at the top of this page.

Will there be more buses on inner Division?

No. 60-foot-long buses can carry more people without adding more buses onto inner Division. On inner Division the Line 4-Division would be replaced with this new bus while maintaining the same frequency of every 15 minutes or better most hours of the day, every day.

Will it cost more to ride?

Will the project mean the new streetscape elements (crosswalks, stormwater facilities, new curbs, landscaping, art) will need to be removed or redone?

No. The project is being designed to fit into the recently completed streetscape elements.

There may be a few places where elements may need to be modified, and TriMet will work closely with residents and business owners if modifications are necessary.

Will the new bus be more environmentally friendly than the diesel buses we have now?

TriMet purchases the cleanest buses possible. With technological advances and expected higher air quality standards, it’s expected that the buses used for this project will be among the most environmentally friendly in TriMet’s fleet.

The bike racks are often full on the Line 4-Division. How many bikes will the new buses accommodate?

Having riders be able to combine bikes with their transit trip is an important issue. TriMet is adding more secure bike parking facilities around its system to allow riders to connect to transit via bike, but leave the bike behind to complete their transit trip. TriMet is also looking at accommodating more bikes on the articulated buses.

Will a transit investment cause more rent increases and more people to be displaced?

For the first time in our region's transit planning history, Portland has developed a complementary Action Plan to address issues of housing affordability and community stabilization, that includes transit investments.

Is this bus rapid transit (BRT)? Doesn't it need to run in its own lane?

There is a wide range of design possibilities for a bus rapid transit project. It is expected that this bus would run in lanes with other traffic in most areas. As this project is developed, the level of features of improved bus service will be determined to meet the Federal Transit Administration's definition. Meeting that definition will allow this project to qualify for Federal Small Starts funding, which provides 50 percent of the cost of the project maximum of $200 million.

The FTA defines bus rapid transit as a system that has:

What other cities have bus rapid transit?

Next steps – and weigh in

Over the next two months, people can share their opinions through this online survey. This fall, the project’s steering committee will consider the community input and technical findings and make a recommendation.

The committee includes community, business and elected leaders and has been having public meetings since winter 2014.The committee’s recommendation will then be considered by the cities of Portland and Gresham, Metro and TriMet for endorsement in late 2016.

How can I weigh in?

Take our survey! Between July 21 and September 9, 2016, you can take an online survey to tell us what you like about the proposed Division improvements compared to the current Line-4 bus service.

What difference would improved bus service make for a changing Southeast Division Street? Get quick facts and a link to a 3-minute survey.

Voices from the street

How is a changing inner Division Street affecting people who live and work there? We walked the street to get these seven stories.