On Tuesday, the Metro Council directed staff to continue on a proposed approach for a potential transportation ballot measure.

The approach came to the Council in the form of a recommendation from a Metro advisory group. Last month, that group, called the Transportation Funding Task Force, unanimously approved about 80% of a package of investments to send to the Council for consideration. The remaining 20% had majority support from the task force.

The recommended package would pay for improvements around greater Portland to ensure people can get around safely and reliably whether they drive, walk, bike or take transit. Improvements would include more than 100 projects on 13 major travel corrridors, including 82nd Avenue and TV Highway.

The direction from the Council is a milestone in a project that began more than a year ago. Before providing the direction, the Metro Council President and Councilors engaged in a two-hour discussion. They weighed details of the package in the context of a set of values developed by the Council and the task force to inform decision-making. Those values included things like safety, climate change and racial equity. The Council requested Metro staff come back to them with more information on a few of the recommended investments meet the values.

Metro Councilor Craig Dirksen said that whatever form the final package takes, it needs to serve a variety of needs across the region. “This transportation project needs to make our transportation better,” he said. “When voters go to the ballot, they will ask themselves will it make my travelling safer and better. ”

On Monday night, more than 100 people gathered in Metro’s Council Chambers in Portland for the hearing. Forty-seven individuals provided testimony to the Metro Council about their transportation priorities. Some shared personal stories, and many spoke of the need for more options, such as better transit for people living with disabilities, and people living farther from city centers.

Access to transit and the impacts of the transportation system also came up in the context of racial equity and the need to prioritize benefits for historically marginalized communities, such as communities of color. Many also spoke of the need for the Council to prioritze action on climate change as it continues to make decisions about transportation investments.

After more than two hours of testimony, Metro Council President Lynn Peterson closed out the hearing with remarks on the importance of public input throughout the process.

“One of the things I learned as a planner is that you have to be able to listen to everybody that’s in the room and everybody who’s not in the room,” she said. “Because a lot of what we discussed tonight is access. Access is really important, so we try to provide as many ways as we possibly could through this entire process.”

Peterson also pointed out that there would be more opportunities to engage before the package of investments is finalized. In addition to work to refine proposed investments, Metro is also planning additional opportunities for public input.

The Council will consider referring a measure to voters in late spring. If referred, it would appear on the ballot in November of this year.

Learn more and sign up to get email updates 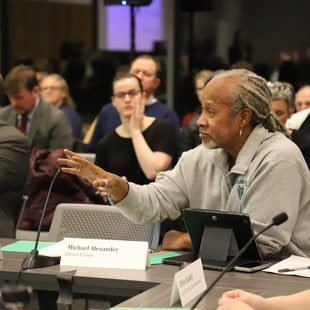