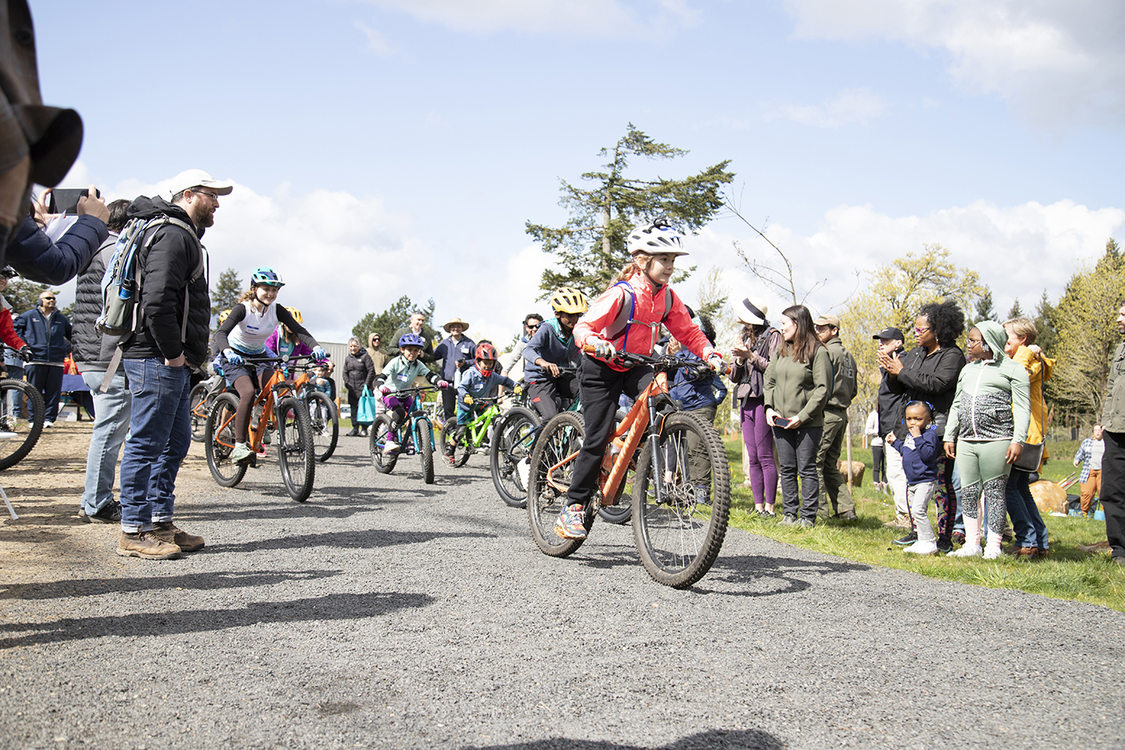 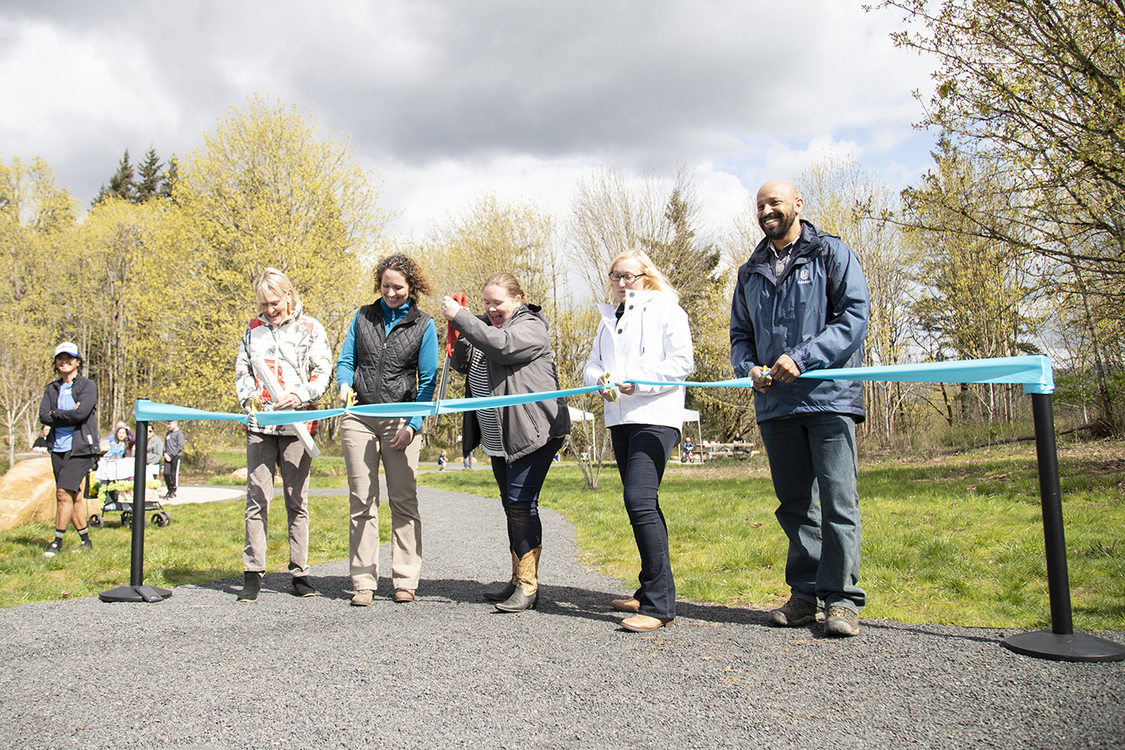 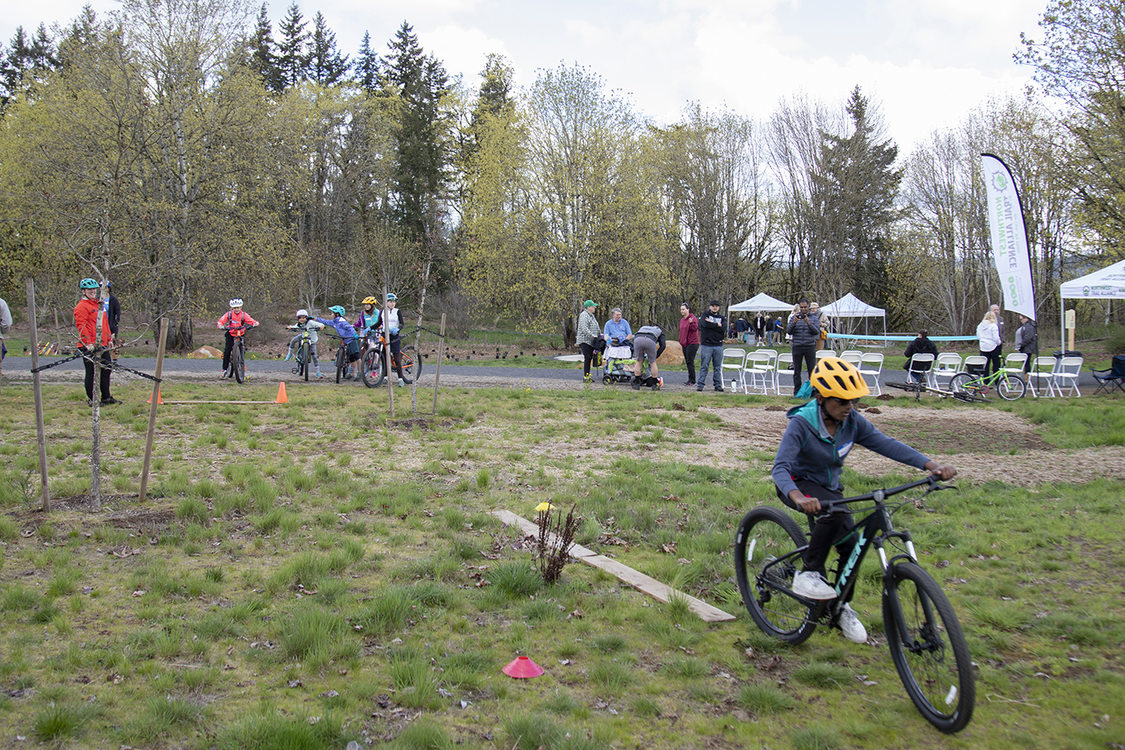 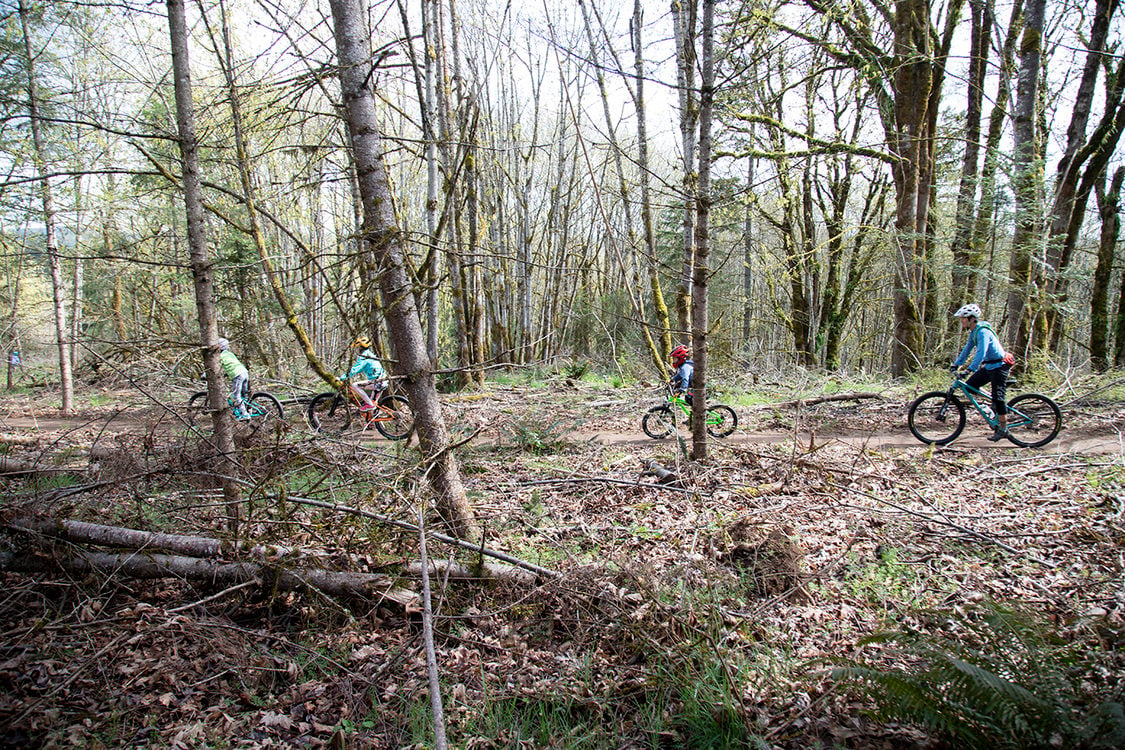 And the park delivered. Hikers and mountain bikers were welcomed with new leaves on the park’s signature big-leaf maples and flowering red currant bushes. Every returning hiker reported seeing and hearing many bird species.

Garret Dayfield and his son, Bryce, drove down from northeast Portland for the celebration. “We wanted to explore a new area, get us into a new space, some place we hadn’t been before,” Dayfield said. “The trail wasn’t overly steep, nice views, nice places to sit down and just listen to the bird activity.”

The Dayfields walked to Tumble Creek Falls, where a wood-frame bridge spans a small, spring-fed creek that comes down the canyon wall. “The falls was just about the right distance with a 5-year-old,” Dayfield said. “You want to have those things that you can get to, that aren’t strenuous, but still get you off the beaten path.”

Newell Creek Canyon Nature Park covers 236 acres of forest. Along with Newell Creek, dozens of smaller seasonal and spring-fed creaks run through the park. Many of these can be seen on the park’s trails. The park features 2.5 miles of hiking trails and nearly 2 miles of dedicated mountain biking trails.

Plans to create a nature park from the natural area in Newell Creek Canyon began in 2014. Voter investments in the 2013 local-option levy, which they renewed in 2016, and in the 2019 parks and nature bond measure funded the planning and building of the park, which cost $3 million

Metro Councilor Christine Lewis, whose district covers most of Clackamas County on either side of the Willamette River, helped welcome the attendees.

“We now have five nature parks in Clackamas County,” Lewis said, citing Canemah Bluff Nature Park in Oregon City, Graham Oaks Nature Park in Wilsonville and Mount Talbert and Scouters Mountain nature parks near Happy Valley. “And I don’t think you’re supposed to choose amongst your children, but I have an only child, so this is my favorite.”

Metro’s work at Newell Creek Canyon began in 1995 when voter passed the first greenspaces bond measure that asked Metro to begin protecting natural areas through the region. Some of the first property purchases were in the canyon.

Metro Council President Lynn Peterson thanked staff from the region’s parks and nature agencies and departments, “Getting parks like this open takes a lot of hard work.” Peterson then praised the community members who advocated for Newell Creek Canyon, “It starts with very special people who feel there is a very special place that needs to be saved.”

She then handed the microphone to Sha Spady, one of the canyon’s first and fiercest advocates.

In the early 90s, Spady saw the canyon’s habitat degrading and unwise developments on the horizon. She told the gathering, “I said, I’m going to do everything in my power to save this beautiful canyon that has supported me with so much love for so many years.”

As she spoke, Spady held up a homemade map of Newell Creek Canyon that she had made to use on tours of the forest with local elected officials, scientists and conservationist. “What we are celebrating today is kind of like a relay race,” she said, then held up the rolled-up map, “And this is the wand that I passed off after the bond measure passed…Then Metro took it on, they had the facility, they had the charge, they had the energy. I don’t know how many times this baton has been passed, but look where we are today.”

When Spady was advocating for the canyon, much of the forest’s understory was covered by invasive blackberry and English ivy was hanging from the trees. Both of these plants choke out native species, creating weak ecosystems with few types of plants. Strong habitats rely on dozens and sometimes hundreds of species to thrive. Much of Metro’s work in the canyon over the past quarter century was helping the forest regain that complex, healthy plant life.

“We saw several trillium. There’s miner’s lettuce blooming down there, Oregon grape,” reported Greg Sullivan after finishing a hike with his family. Sullivan, who lives in Oak Grove, said, “When we were down there I said I’d be here every day if I lived closer, just to see it change. To see the Oregon native plants, we have amazing plants and we should appreciate it.” 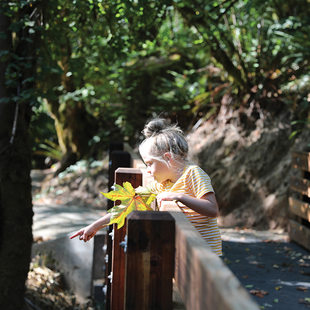 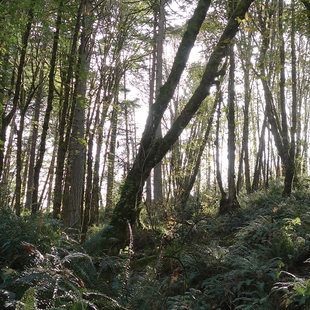 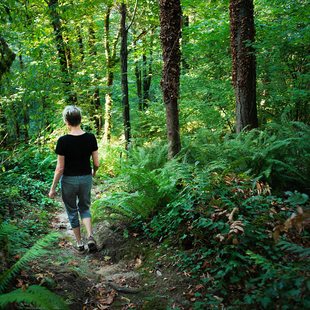 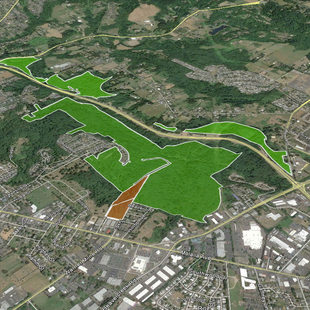