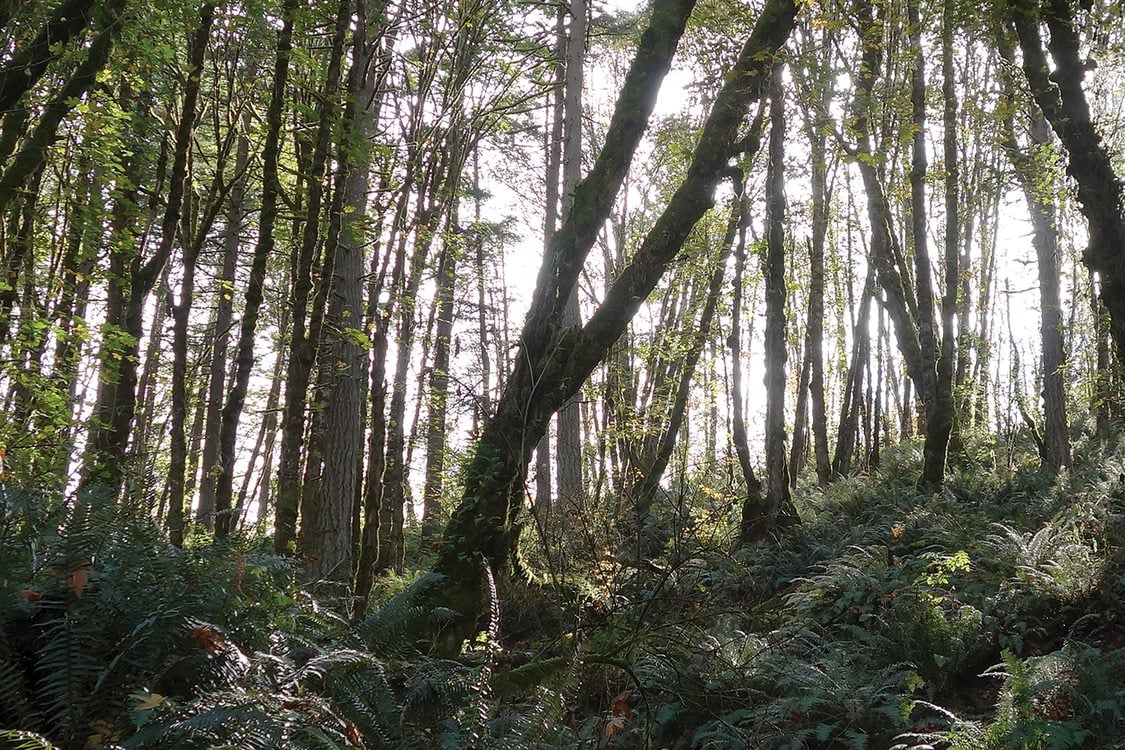 The slopes of Newell Creek Canyon are dotted with springs.

Cool water from springs flow into Newell and Abernethy creeks and make ideal spawning grounds for native fish, including the Pacific lamprey.

If a rare, undeveloped natural area exists in the middle of a city, it should be left alone, right? Can’t nature take care of itself? Well, not exactly. While it may seem like the best way to preserve or restore nature close to home is to leave it completely undisturbed, it takes years of planning and hard work to protect fragile ecosystems that exist near to human development.

“If we left this site alone it would quickly be covered with ivy, clematis, holly and laurel,” said Brian Vaughn, a natural resource scientist at Metro, referring to the weeds he sees most frequently at Newell Creek Canyon.

Along with Chehalem Ridge, Newell Creek will become a nature park later this year. It took decades to get it ready.

To restore and maintain a healthy environment in the canyon, Vaughn and his colleagues have spent thousands of hours since Metro purchased the site in 1995, removing weeds and human debris.

Newell Creek Canyon is a wild place smack dab in the middle of Oregon City, within walking distance of a Fred Meyer and an Abby’s Pizza. It’s accessible by bike, bus and car, which makes it an ideal place for people to experience nature right in their neighborhood. It will open as a nature park later this year, but it’s taken a long time to turn it into a space where that’s possible.

In 1995, Newell Creek neighbors, determined to prevent development that could damage the canyon’s fragile ecosystem, helped campaign for Metro's bond measure to protect nature across greater Portland. The bond measure passed, and Metro swiftly began buying land along the creek.

Jonathan Soll, Metro's science team manager, says, “At the core of why voters passed and renewed the levy is our ability to take places that are in OK or poor condition and turn them towards a good condition, and keep them heading that way.”

“One of the most exciting parts of Newell Creek are the streams that cascade into the canyon,” Vaughn says. “It’s a nature wonderland.”

Bubbling springs and seeps surround the canyon, providing cold enough, clean enough water for coho salmon, cutthroat trout, steelhead and Pacific lamprey to spawn. It’s a delicate habitat, and maintaining water quality and preventing erosion to improve it is a priority at the site. To see this restoration work in action in the future, neighbors can look straight up.

To improve life for the fish in both Newell and nearby Abernethy creeks, helicopters will fly more than 160 large logs into the canyon and place them over one another in the water to create log jams. This airborne approach is part of a stream restoration effort led by the Greater Oregon City Watershed Council, Oregon Department of Fish and Wildlife and Metro. The log jams create the pools and gravel areas salmon, trout and lamprey use for spawning and rearing young.

Crews are hard at work completing the bridges and trails that will take visitors through the future park. In addition to the chance to see the park’s water habitats up close, amenities will include off-road cycling trails and a large day-use area with parking for buses. And though construction work will end when the park opens in the fall, the restoration work will continue.

Brian Vaughn has been waiting over a decade for the park to open, and he’s prepared to wait longer to see some of the fruits of his labor.

Editor’s note: A previous version of this story said that conservation work with a helicopter would happen this summer. That work is now planned for 2022.