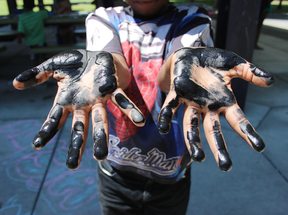 Musician Mat Randol describes himself as a shy and reserved person. But he speaks boldly through the elaborate and atmospheric soundscapes he creates in his music.

“I started making music as a way for me to express myself,” Randol said. “I wasn't really someone that was open to sharing.” As he has gotten older, he has become more confident with a raw, unfiltered voice.

In his latest album “Art of Allowing,” he invites listeners to share his deep love of hip hop – traveling through tracks that highlight everything from gospel voices to “Old Skool” 70s riffs to the best of laid-back 90s rap.

His album got a boost from an Art Saved My Life residency, which helped him promote his work and set up performances. He also produced a music video for his song “UP & UP” during the residency.

“Art Saved My Life looked out for me at a time that I really needed that,” Randol said.

Two years ago, Randol moved to the Piedmont neighborhood after a housing developer demolished the house he was renting near Alberta. He was at risk of being displaced again during his residency when a roommate moved out, leaving him scrambling for rent.

“They really saved me,” he said. “Art Saved My Life, seriously!”

The organization also connected him to a health care network through which he received acupuncture and chiropractor treatments. The treatments relieved stress and bolstered his creativity.

The album and the residency both helped Randol to continue to heal from a lifetime of negative thinking stemming from personal tragedy and loss.

“My story is about someone who grew up in unfortunate situations and had to grow up at 14-years old and [be] the man of the house… doing things that normal teenagers don't have to worry about,” Randol said.

The album, representing his 15 years as a recording artist and sound engineer, is his most ambitious yet - an opus about overcoming one’s past. He describes his work as upbeat and triumphant. In his title track “Art of Allowing,” Randol empowers listeners to accept themselves.

Make peace with all things as they are
Trust me, do that or you won't get very far
Accept that who you are is who you are
Art of allowing, realign your balance.

He hopes his music moves those who share similar experiences, especially people living with anxiety and depression.

“I think my biggest thing is to be a voice for the voiceless,” he said, “[and] be a voice for people that aren't very good at like expressing themselves.”