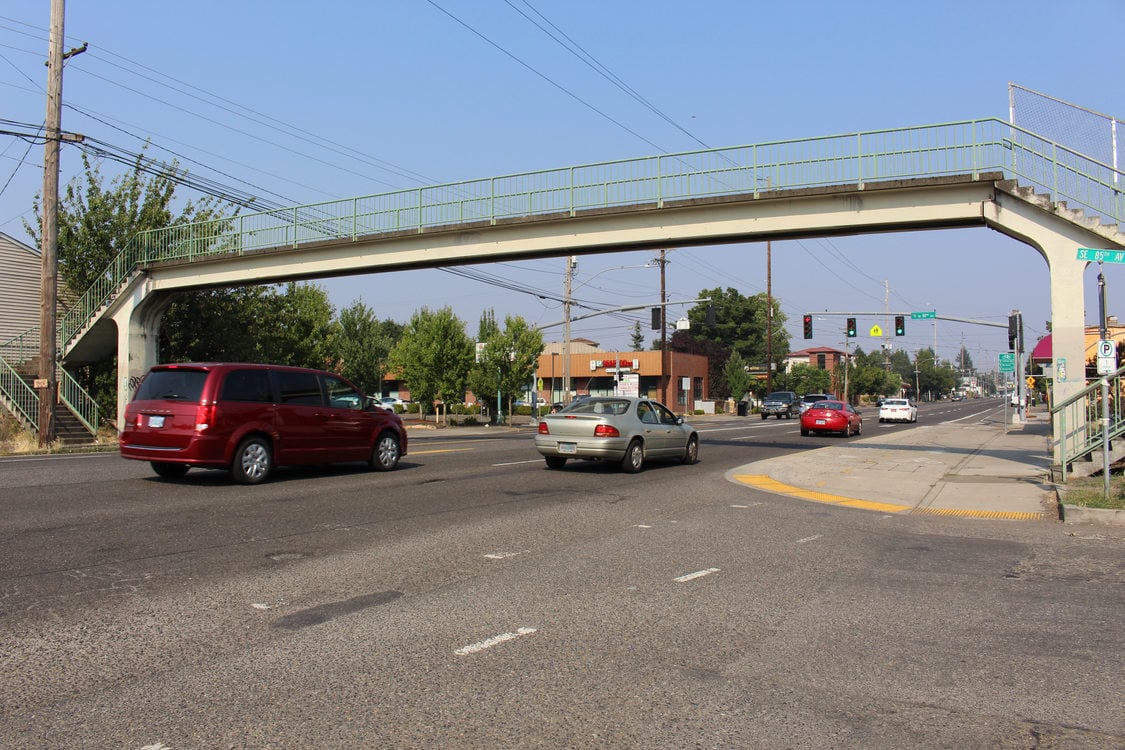 The pedestrian bridge at Southeast Division Street and 85th Avenue

APANO plans to use art to transform this underused pedestrian bridge in the heart of the Jade District, so that the bridge becomes inviting to use on this stretch of Southeast Division Street, one of the most dangerous streets in Portland. 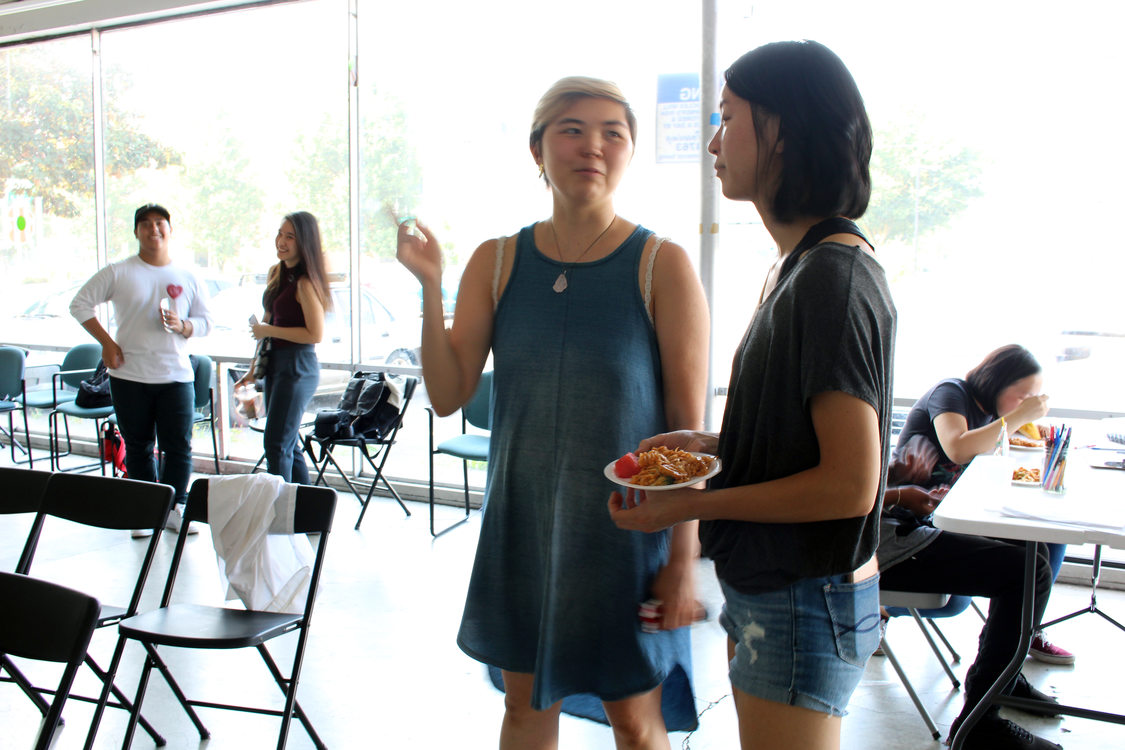 Candace Kita and Jennifer Phung greet each other at the Jade/APANO Multicultural Space (JAMS) where a photography art exhibition called "Eastside 'Just Us' Stories" took place earlier this month. The art exhibit is the product of a placemaking program that APANO has overseen for the past three years.

Southeast Division Street, from 82nd Avenue to 174th Avenue at the east end of Portland, is one of the most dangerous streets in Portland.

A pedestrian bridge at 85th Avenue in the Jade District, one of the most racially diverse areas in the state, offers people an opportunity to cross this busy street above traffic.

"Placemaking is hugely important in recognizing and illuminating the assets of a neighborhood and helping people feel more ownership of their neighborhood," said APANO's Candace Kita, who will oversee the bridge art mural project.

But three people have been hit by cars and killed while crossing Division near the bridge since 2011. Two of those people were hit a couple of hours apart one night last December, prompting the Portland City Council to reduce the speed limit along portions of Division through an emergency ordinance. The city also added speed safety cameras.

These deaths highlight the need for better safety along Division and speak to the fact that the bridge is underused, said Candace Kita, culture work and development coordinator at APANO, a grassroots advocacy organization for Asians and Pacific Islanders.

“It doesn’t look like the kind of site you’d want to cross late at night,” she said. “The areas around it haven’t been well tended.”

Earlier this month, Metro awarded APANO a grant to transform this bridge as an art installation that encourages people to walk, bike and drive safely.

“We’re hoping that by lifting it up and adding a creative component, we can both honor and memorialize the folks who passed away at that site as well as offer others an incentive to use it more and make it feel a bit more comfortable and safe,” Kita said.

The grant is part of Metro’s new Community Placemaking program. It aims to help communities create the change they want to see in their neighborhoods, while supporting more equitable outcomes among historically marginalized communities.

“We wanted to kind of get a probe of what ideas would bubble up from the community, particularly marginalized cultures,” said Metro Councilor Carlotta Collette, who sat on the program’s advisory committee. “And to be able to have them tell us what's important to them was really important to us.”

“East Portland is one area that's had a pretty complicated history of investment and placemaking is especially important here, because we're still working on getting certain assets like sidewalks in certain parts of it,” Kita said.

“We've seen APANO’s ability to help represent and lift up the voices of many low-income communities, specifically Asian and Pacific Islander communities… doing outreach and making sure language is not a barrier to a lot of the decisions that impact them,” said OPAL's Jennifer Phung, a Jade District resident.

“So any chance we have to illuminate needs, issues and joys of this particular location is huge,” she said, “and placemaking offers one really accessible way to think about what this neighborhood is like and what the character is like,” while helping people feel ownership over their neighborhood.

Kita said APANO’s Jade-Midway Districts Art Plan, developed with extensive community engagement, identified the walking bridge’s potential for being a shared public art and a gateway to the Jade District.

She said the community envisions painting all of the bridge – columns, rails, underbelly and stairs – so that it’s bright and colorful with art that reflects the area’s vibrant, diverse cultures.

APANO is assembling a design and selection committee of local community members to choose a local artist to execute that vision.

“We hope to have the artist put together a community forum… to have input at various stages,” Kita said, adding that this kind of engagement helps create a more connected, proud and empowered community.

The Portland Bureau of Transportation owns the bridge and will work with APANO to secure permits and ensure that the proposed designs meet city guidelines. PBOT will also apply new walking and biking street markings and provide traffic control during the art installation.

Portland officials continue to work with communities on outer Division Street to improve safety along Division to prevent deaths and serious injuries as part of its Vision Zero Plan and Division Transit Project. These ongoing fixes and street redesigns could take years.

APANO’s placemaking project, Kita said, could have a more immediate impact for people traveling on Division in the Jade District. The art would display safety messages that direct people to drive slower or to walk and bike at safe crossings. Kita said that helps advance Vision Zero.

With its deep community roots and strong partnerships, APANO has a track record of having an impact, said Jennifer Phung, a Jade District resident. Phung works with OPAL, another grassroots advocacy organization with whom APANO often partners on a range of policy advocacy issues.

“We've seen APANO’s ability to help represent and lift up the voices of many low-income communities, specifically Asian and Pacific Islander communities… doing outreach and making sure language is not a barrier to a lot of the decisions that impact them,” she said.

“There's quite a bit of evidence and several examples of placemaking projects… that do have a more equitable outcome because they are able to drive more participation by creating a platform that's more enjoyable, more culturally specific, more accessible to a wider range of people,” said Ben Stone, director of arts and culture at Smart Growth America and its program Transportation for America.

Transportation for America funded a multiyear placemaking project in Portland's Jade District and Division Midway commercial areas. APANO has overseen the project and engaged a wide array of partners that include Metro.

“It's important to test lots of ideas and try out what works and what doesn't work and then refine and repeat,” he said. “So I think that's what's important about funding projects like this.”

Metro awards Community Placemaking grants to a range of projects seeking to strengthen connections between people and neighborhoods throughout greater Portland.