Faridah Haron has been involved with the refugee community in Portland for many years. Born in Malaysia and raised in Singapore, she’s lived in Portland for 30 years. She was always interested in the parks system but noticed “missing pieces” whenever she visited a park, like the lack of translations for signage and programming.

When she heard about Metro’s Parks and Nature Equity Advisory Committee, she thought it could make a difference in how communities of color experience parks.

The Metro Council approved the Strategic Plan to Advance Racial Equity, Diversity and Inclusion in 2016, committing the regional government to address systemic inequities using a racial equity strategy. The new committee is one way that Metro is working to increase equity, diversity and inclusion in its parks and nature work.

From nearly 40 applicants, 15 people were selected to serve two-year terms with the option to renew up to two times. At least one member of the committee is an immigrant or refugee, American Indian or Alaska Native, a senior, a young adult, a person living with a disability, and a person who works in the natural resource, park or environmental education field.

The committee started in January and meets once a month for two hours. Within the first four months, they provided input on four big projects: the special-use permit process, the parks and nature bond measure on the November ballot, restoration contracts, and the Community Partnerships program with community-based organizations.

“That was a lot,” said Gaylen Beatty, the parks and nature special projects manager overseeing the committee. “They said that rush of time is really hard, and we need to slow down, build relationships, continue the trust building and develop the shared analysis so we can work on these root causes of inequity.”

Serving on the committee provides a unique experience, said Dasha Foerster, a first-generation immigrant from Ukraine.

“Seeking perspectives and input sometimes means discovering great fellowships, but other times it means having hard conversations,” Foerster, who is representing the Slavic community, wrote in an email. “It takes consistency, willing presence and accountability for trust to manifest, but it is worth it! The incredible people who participate on the committee and facilitate and support the work of the committee are getting it right, and I have great hopes for the outcomes of this Equity Advisory Committee’s work.

”In June, the group met at Graham Oaks Nature Park in Wilsonville so Metro staff and committee members could get to know each other better.

“They have hope, and they have concern,” Beatty said. “They’ve been in committees before, and so where is the realm of influence, especially in those leadership positions?”

“I was wondering how far this committee would go,” Haron said. “The committee would ask difficult questions and raise difficult issues, but the Metro staff were committed to the goals of the EAC, and they would struggle with us together and try to address those issues. If they do not know, they would go to other resources that can help guide us.”

The group has also spent time learning about the history of the conservation movement in America, which has its roots in taking land from Black and Indigenous people to create public parks and spaces intended for white settlers. In the coming months, there will be smaller projects, possible training and leadership opportunities, Beatty said.

“I am excited in exploring the things that we don’t know,” she said. “I don’t know what we’re trying to get to. All I know is we’ll know it when they see it in their community.”

She is the grants director at the MRG Foundation and previously worked as a program associate at Meyer Memorial Trust. Rubiani is a graduate of the Pan Immigrant Leadership and Organizing Training (PILOT) at Unite Oregon, a nonprofit working to build an intercultural movement for justice.
Related stories
Now accepting applications for Metro’s Equity Advisory Committee 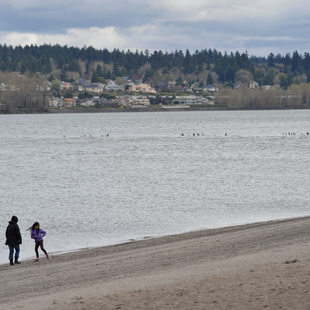