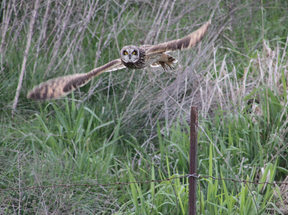 End of the road at Ennis Creek Forest Natural Area 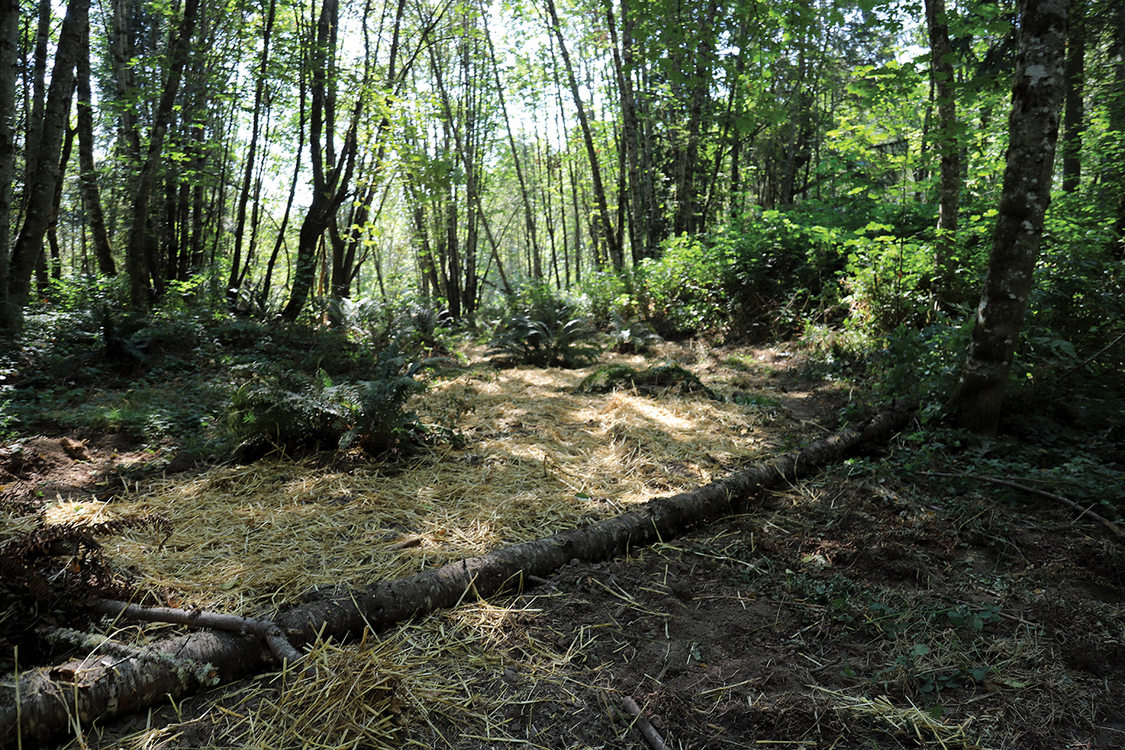 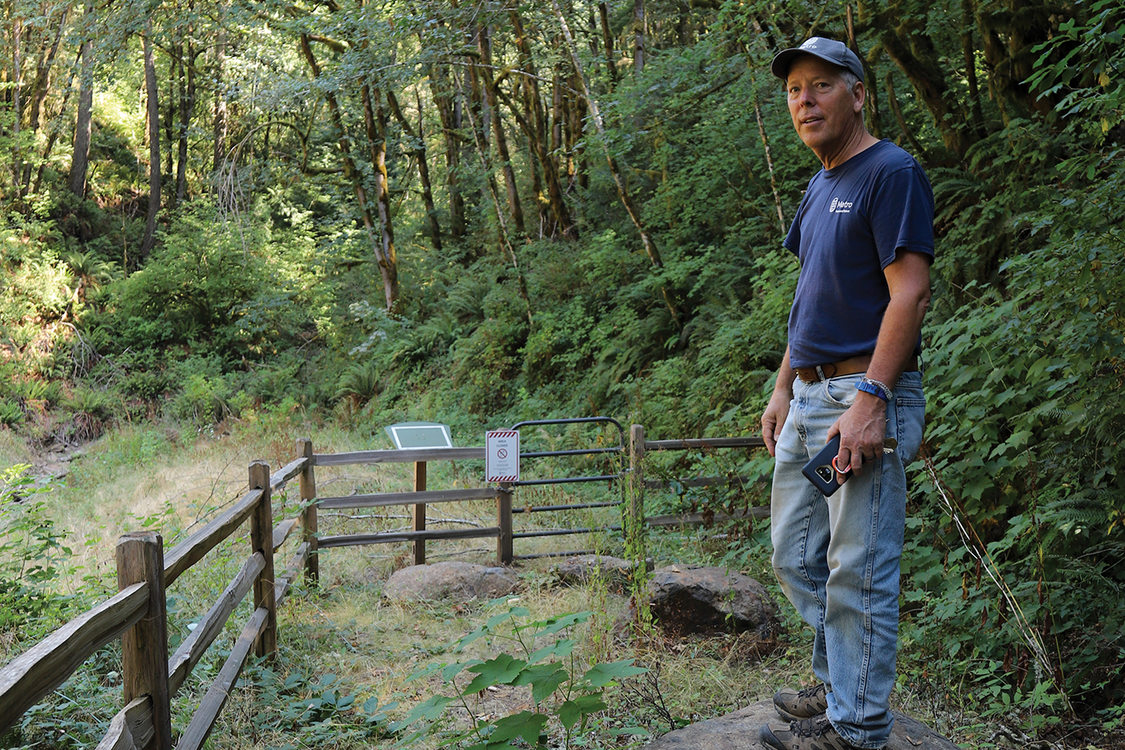 Earthmovers shape the contours of the slope of a former logging road where it crosses a creek in Ennis Creek Forest Natural Area.

Earthmovers shape the contours of the slope of a former logging road where it crosses a creek in Ennis Creek Forest Natural Area.

End of the road at Ennis Creek Forest Natural Area

Maple trees and young evergreens stand at the entrance to Ennis Creek Forest Natural Area on a hillside on the northwest border of Forest Park. With so many trees, it’s almost impossible to imagine this spot was clearcut less than 20 years ago. Here in the Tualatin Mountains, a near continuous swath of park and managed wildlands span thousands of acres along Portland’s northwest corner.

Ennis Creek Forest's 350 acres of formerly logged land was purchased by Metro with money from bond measures passed in 1995 and 2006. An inconspicuous gate marks the entrance to what feels like a charming country path leading down a hill and around a corner. The road is just about the only sign of the former logging operations, and it is being unbuilt in a process called decommissioning.

Decommissioning these old logging roads involves removing every culvert, recontouring the land and digging up inches of compacted gravel so that newly planted roots and water can penetrate the soil. The ultimate goal of this dramatic remodel is to stop the horrendous damage that happens when a road washes out. This is done by returning the land to a near-natural shape through a process called "scarifying" (pronounced SCARE-i-fy-ing).

It’s as intense as it sounds and requires heavy excavation equipment to literally rip up the top 12 to 18 inches of ground along the entire logging road. Looking at all the plants and trees growing in the area, it almost seems unnecessary. Isn’t nature taking care of itself?

Adam Stellmacher, one of Metro’s natural resource specialists, drives up to the gate. Wearing boots, jeans and T-shirt, Adam has the look of someone used to being in the outdoors.

Adam opens the gate and drives slowly down the bumpy road. It's a beautiful drive along a grassy road, but looks can be deceiving. He passes a pile of twisted metal – the remains of old culverts pulled from the logging road during the in-water work window, a period running from mid-July through the end of September when work can be done on streambeds and have minimal impact on fish and wildlife. The culverts – pipes that channel water under the road – are part of a highly engineered piece of infrastructure that won’t just disappear with time.

Adam says that the road surface is so impermeable that rainwater runs down it in accelerating sheets. Making it worse, many of the culverts have broken, clogged up or otherwise failed. So instead of being channeled under the roads, the water pools on the road. It’s a recipe for mudslides, and the road has washed out in multiple places. The slides dump catastrophic amounts of soil and gravel into streams. And the site of the slide becomes a persistent wound that continues to erode.

With more than two miles of road to decommission, there are 12 culverts to remove and 18 water bars to install. Adam explains that water bars are horizontal channels cut across the decommissioned roads to slow water down and reduce erosion. Then the land will be “fuzzed up”: the loose soil will be seeded and planted with native plants like Oregon grape, salal and sword ferns that will create soft ground that water can soak into. It should be hard to tell a road was ever there.

Once the heavy construction equipment has done its restoration work and is gone, there should never be a machine bigger than a chainsaw on the site again.

Right now, it’s the exact opposite of a peaceful, non-mechanical site. The sound of a heavy diesel motor punctuates the air near the stream bed. The ground slopes steeply toward a creek bed where an enormous excavator busily removing a culvert is dwarfed by the high sides of the canyon. “Sometimes you have to do something dramatic to jump-start the healing process,” says Adam, picking his way down the newly shaped ravine and up the other side to the completed first stage of work.

Once the culvert is gone, the excavator will reshape the creek bed and place boulders. With these topographical changes, and through using the inherent water-slowing wisdom of native plants like salmonberry, willow and cedar, sediment will be captured, reducing erosion. It’s called “roughing up the creek,” and it helps slow the water down, a vital part of healing eroded lands.

On the other side of the ravine, the land feels more organic, less linear, and it’s hard to pick out where the road actually went. The ground is uneven and covered with straw, ferns, and beneath the straw, seeds. Adam looks happy as he notes the ferns. He didn’t ask the construction crew to place them there, but they’ve done enough projects like Ennis Creek to understand how to quickly heal the land. By next spring, Adam says, the ferns, grass and other native plants will be standing up and you would be hard pressed to tell a road had been here at all.

Restoration is an ongoing learning process that can offer valuable takeaways for informing future projects. Metro keeps track of the tools and techniques that have worked in other initiatives, hoping that they can be useful to future projects like Ennis Creek Forest.

During the 2019 restoration and decommissioning of logging roads at McCarthy Creek Forest Natural Area, which lies just up the road, Metro discovered several approaches that are being applied at Ennis Creek Forest.

Andrea Berkely, a natural resource scientist at Metro, will be using one of those successful methods to stabilize the stream banks and capture micro-particles of sediment so downstream water stays clean. She plans on laying down coconut coir mats, which resemble rough-fibered, tightly woven fishing nets. The mats hold juncus, a grass-like plant, which will send its roots into the steep stream banks and keep the soil in place.

Andrea says juncus’ tiny, needle-like leaves are amazingly effective at speeding up the healing process, especially at stream headwaters. “Headwaters, where the stream begins, are underappreciated in our stream networks,” she says. “Pound-for-pound, headwaters are so important for controlling stream sediment and nutrition downstream.”

This section of Ennis Creek Forest is part of an upland watershed. It’s important for the water in the creek and its tributaries to move slowly so it better gathers nutrients from plants, funguses and animals that fall into the stream and carry them to lowland habitats, where salmon and other wildlife depend on the nutrition. Adam says that decommissioning logging roads like the one at Ennis Creek Forest gives everything that lives downstream a healthier, more stable habitat, which means better food, better water and flood control, and more diverse ecosystems.

Over at McCarthy Creek Forest Natural Area, Adam shows what the future looks like for the decommissioned road at Ennis Creek. This site is noticeably different due to larger and more prevalent Douglas fir, remnants of a commercial forest that has been left to mature. A functioning gravel road makes a gently undulating loop through 402 acres – land that protects more than five miles of McCarthy Creek and its tributaries.

It’s a peaceful hilltop drive along the main gravel road. After a mile or so, Adam pulls off to the side and walks down another sylvan lane which is actually a non-decommissioned section of a spur road that was decommissioned further down. While it has grasses growing on the surface, it’s clear that it hasn’t been scarified as there are no native plants growing and the ground is compacted and uniform.

About 400 yards down, Adam stops at a nice viewpoint. A big boulder and fence marks the end of the non-decommissioned road and the start of rehabilitated land. While the barriers are clearly there to protect the stream area it’s unclear why it needs protection since it looks so pristine. Adam says that’s the whole point. You can’t tell where the old logging road ran. It looks like an undisturbed meadow peppered with bushes and trees. The land has been healed and is functioning as it was intended to.

Back at his car, Adam pushes his hat back and reflects on the life-cycle of decommissioning logging roads on sites like this. He says from initial planning to final planting, 8 to 10 years can pass. While this may seem like a long time, he says it’s worth the effort. “This is joyful work,” he says.

The new natural area was funded by the voter-approved 2019 parks and nature bond.