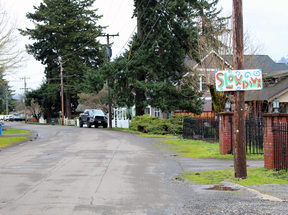 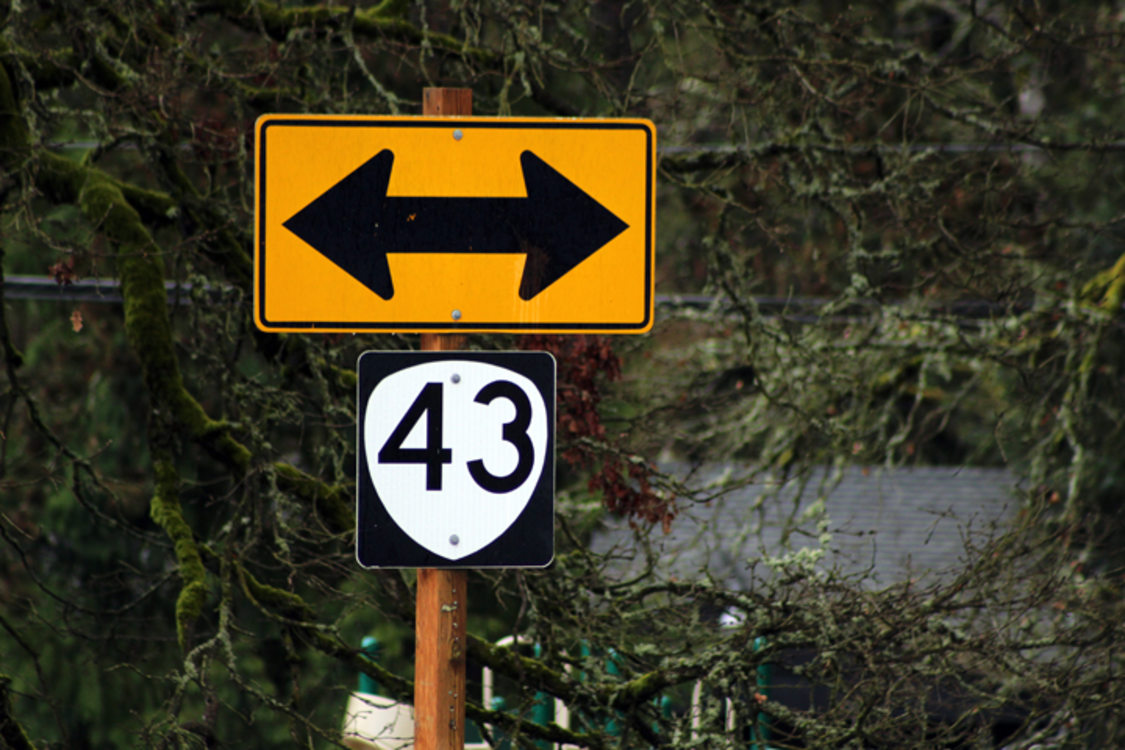 Highway 43 links Oregon City to Portland along the west side of the Willamette River. But as neighborhoods grew up along the two-lane road in West Linn, the highway has lagged in safety improvements for people walking and biking to businesses, bus stops and schools along its route. 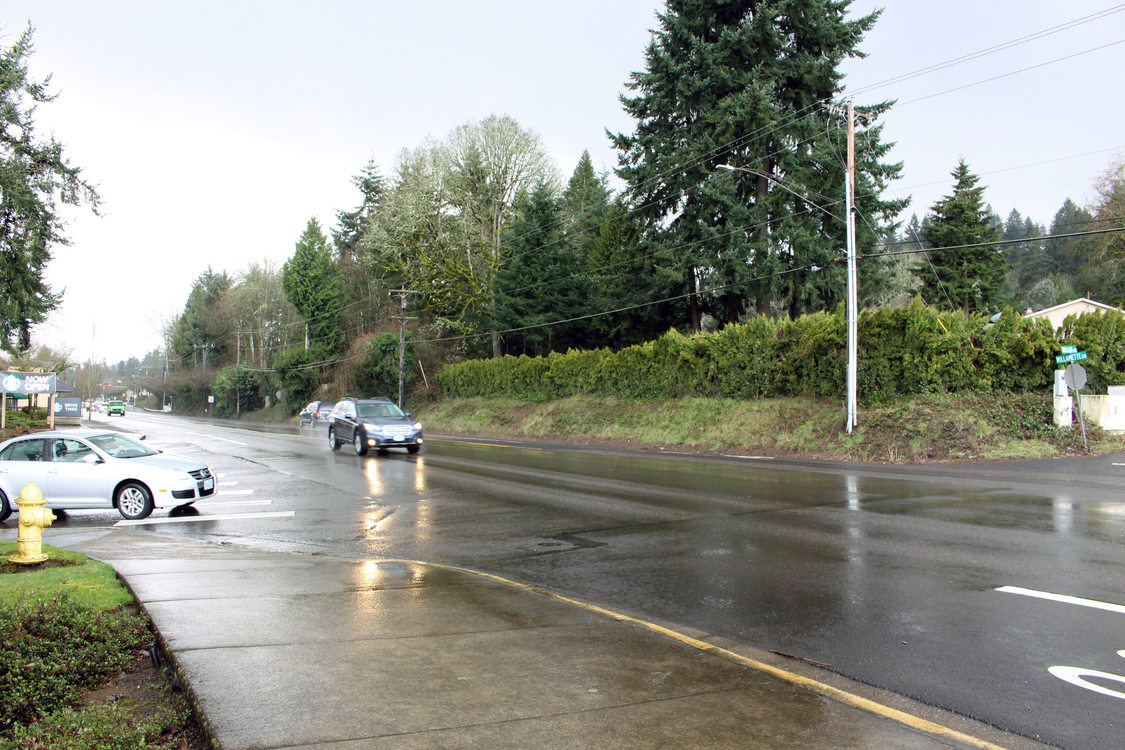 West Linn resident Roberta Schwarz hopes to see safer routes to walk along Highway 43. Her friends were struck by an SUV driver while crossing an intersection along this busy corridor.

West Linn resident Roberta Schwarz hopes to see safer options for walking along Highway 43. In 2015, her friends were struck by an SUV driver while crossing an intersection along this busy corridor. 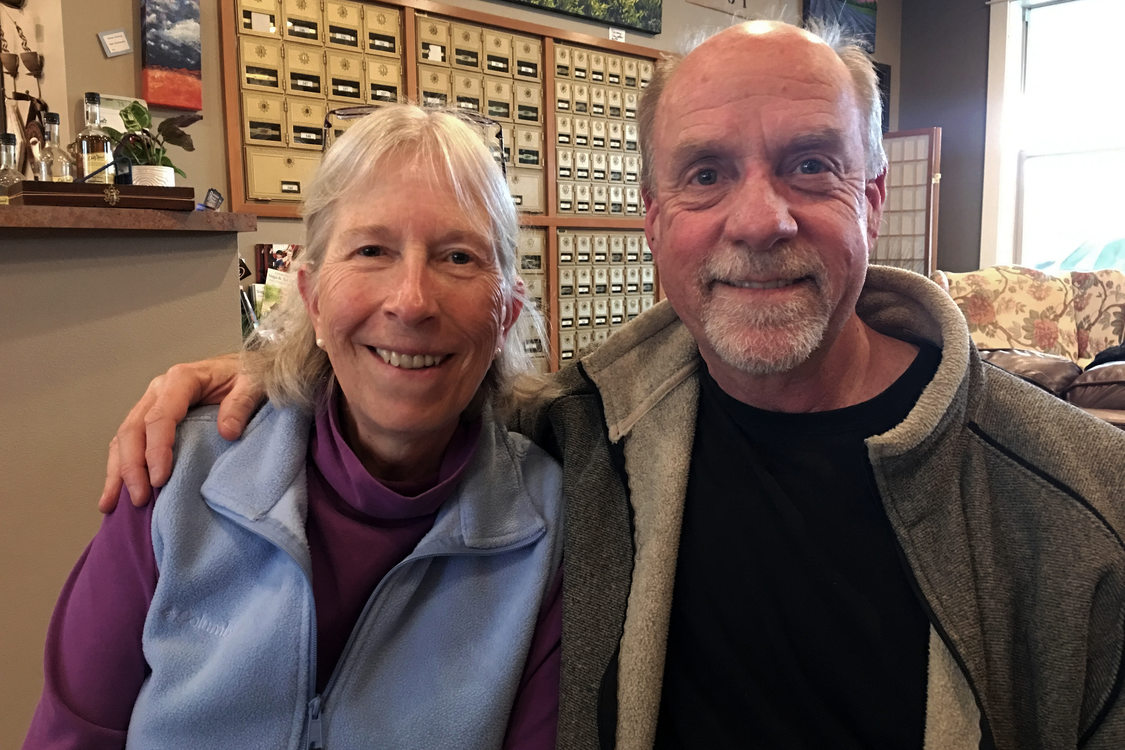 Schwarz and West Linn Mayor Russ Axelrod both worked hard to secure regional funding for a safer Highway 43. In the end, another Clackamas County city stepped up to help get the project proposal to succeed.

One morning in late January 2015, Roberta Schwarz was reading the newspaper in her home office, when she came across an article about two friends who were seriously injured in a crash earlier that month.

Chris and Cornelia Seigneur were walking along Highway 43 in West Linn to get dinner. It was a "beautiful, sunny" evening, as the Seigneurs later described it to The Portland Tribune. Then, out of nowhere, they were struck by someone driving an SUV while crossing an intersection.

“Everybody knows it’s a dangerous highway, but it’s a whole different ball game when it’s somebody that you know [who’s been hurt], somebody who’s a friend,” Schwarz said.

More than two years later, the Seigneurs are still dealing with significant physical and emotional issues as a result of the serious injuries they sustained during the crash. (They declined to be interviewed for this story.)

Schwarz said residents and city officials have sought better safety along Highway 43 for decades. She was thrilled when she learned the city applied for a Metro grant to make the state-owned Highway 43 safer for people walking, biking, waiting for the bus and driving.

The city plans to create safer crossings, completed sidewalks and protected bike paths, as well as safe turning lanes, along a mile of the Highway 43 corridor, from the Lake Oswego boundary to an intersection near Mary S. Young State Park.

A grant from federal transportation dollars, known as regional flexible funds, will help get that project off the ground. The Metro Council and Joint Policy Advisory Committee on Transportation (JPACT) distribute those flexible funds every few years.

Schwarz didn’t think twice about throwing her support behind this project, especially after her friends survived a harrowing crash.

“We would get phone calls from the city saying that the next Metro Council meeting would be on such and such date,” Schwarz recalls. “One of those [JPACT] meetings was at 7:30 a.m. and during my husband’s vacation week. We all carpooled. My husband said, ‘This is worth giving up some of my vacation time.’”

"One of those meetings was at 7:30 a.m. and during my husband’s vacation week. We all carpooled. My husband said, ‘This is worth giving up some of my vacation time.’”

“Just about everyone was there… so that was amazing,” Schwarz exclaimed at a West Linn coffee shop recently, where she was joined by Axelrod. “That’s the kind of spirit you want to see in a community. Let’s get this done!”

“This is the first time, really, that we got organized well and did the appropriate outreach to get the specific flexible funding,” Axelrod said. “So it was a very concerted effort by staff, by council, by citizenry to become engaged and participate.”

That show of support is one reason JPACT and the Metro Council approved awarding $3 million to West Linn for its Highway 43 improvement project.

West Linn also secured another $1.1 million from the Statewide Transportation Improvement Program to complete the project’s first phase, which will cost an estimated $5 million to $6 million, according to Axelrod. City officials expect to use fees assessed on new development to pay for the rest.

Metro staff conduct technical evaluations of flexible fund project proposals and score them according to a variety of selection criteria. High priority projects include those that would serve diverse communities, ranging from low-income to non-white to the elderly and young.

“West Linn could never score properly to be in the running, because of the way the scoring is setup,” Axelrod said. “So they actually evaluated it a little differently and put forward a scenario that showed that this was really a deserving project.”

Axelrod praised Milwaukie Mayor Mark Gamba and the Clackamas County Coordinating Committee for helping West Linn. The committee, also known as C4, includes representatives of the county and cities; it chose priorities to recommend for funding within Clackamas County.

Gamba didn’t insist on advancing flexible funds for Milwaukie’s Monroe Street Neighborhood Greenway in order to help elevate the Highway 43 project, and encourage more walking and biking along this route.

"That's above and beyond,” said Metro Councilor Carlotta Collette, who represents West Linn. “And that recognizes both regional cooperation and regional understanding, but also a major dedication to active transportation on the part of the city of Milwaukie.”

“When I'm sitting at those tables – at the C4 table or I'm at MPAC or JPACT – I view my job not only to represent Milwaukie, but really to be thinking about the whole region as a system, as one,” Gamba said during a phone interview.

Gamba points out that much of the west side of the metro region has not been as good as the east side has about building biking routes.

“For 30 years, we've been wanting to change Highway 43,” Schwarz reiterated. “And finally, it's getting done. The money has come: over $3 million. And there's a there, there. It's gonna happen. Gosh, it's so exciting.”

“I'm a firm believer that the biggest problem amongst all the hundreds of problems we have to deal with… is climate change,” Gamba said. “So, the bottom line is: which project is going to get the most butts out of car seats? That's my measurement. That's literally the watershed for me… In my judgment, the Highway 43 project will do that.”

Gamba stresses an urgent need for Highway 43 to have a safe biking route on the west side of the river from the Arch Bridge in Oregon City all the way to downtown Portland.

“The region really needs to step up,” Gamba said. “I get that we're talking about the wealthiest corner of our whole metro region, West Linn and Lake Oswego. However, there are still a whole lot of people over there who would probably ride their bikes to work or ride their bikes to wherever if it were safe to do. And it has the least amount of infrastructure.”

"The fact that the city of Milwaukie gave up its grant, or its funding, in order to support the West Linn funding was a really great indication of why it's important that people recognize that that corridor has nothing,” Collette said. “They don't even have sidewalks, let alone a bike path. And it's a state road.”

West Linn is also working closely with Lake Oswego, where leaders hope to complete a walking and biking trail into Portland one day.

“The idea is you're going to be able to get on your bicycle in Oregon City on a safe bicycle route and be able to ride all the way into Portland on the west side and back,” Axelrod said.

West Linn's application with more details about the project.

The first phase of the project will include improved crosswalk signals, better lighting, better accessibility for people with limited mobility, protected intersections with raised corner bike refuge islands, and other safeguards for people biking and walking.

Missing sidewalk sections will get completed between residential, commercial and transit areas.

The remaining sections of the project will be more difficult to tackle given West Linn’s terrain, Axelrod said.

For her part, Schwarz is ready for the change.

“For 30 years, we've been wanting to change Highway 43,” Schwarz reiterated. “And finally, it's getting done. The money has come: over $3 million. And there's a there, there. It's gonna happen. Gosh, it's so exciting.” 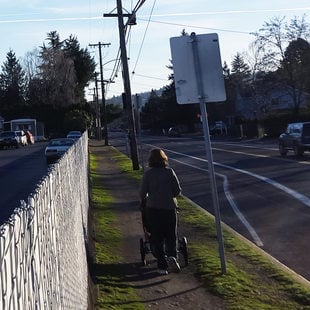