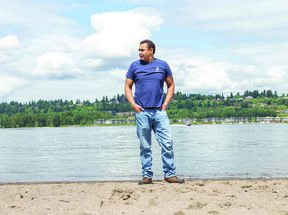 Learn how a Metro nature educator is connecting Black and Brown kids to swimming in the summer edition of Our Big Backyard. 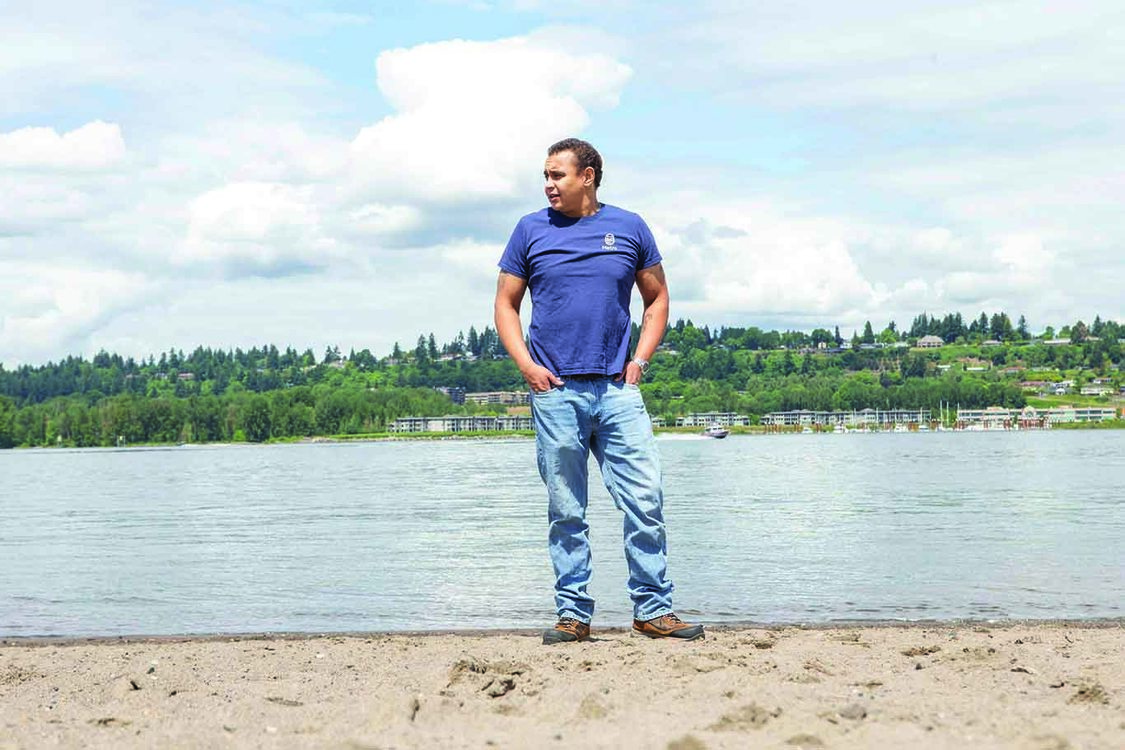 Jason Ligons stands on the bank of the Columbia River at Broughton Beach. The Metro nature educator wants to reconnect children of color with water and swimming. 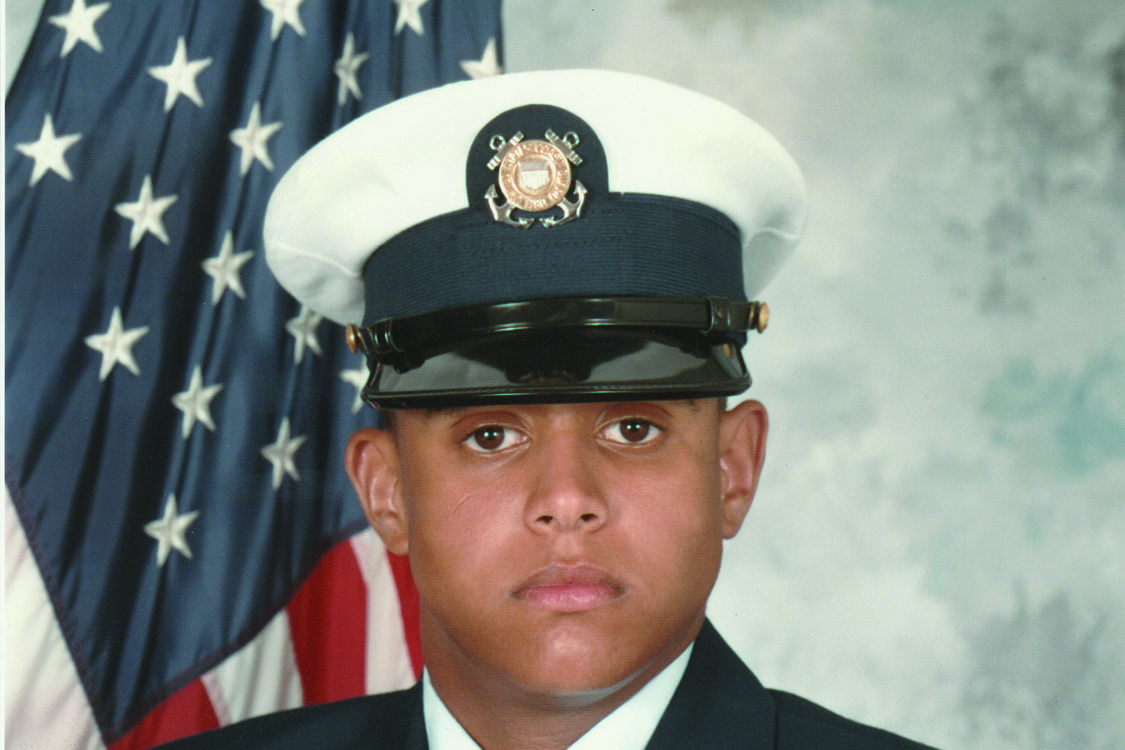 Jason Ligons joined the Coast Guard out of high school and became a rescue swimmer. He joined a legacy of Black Coast Guard members who have saved lives since at least the 1880s.

Black people don’t know how to swim, has been a near constant refrain throughout Metro naturalist, Jason Ligons’s, life – and he is tired of it.

Ligons spent his early years surrounded by water in Eagle River, Alaska, a bucolic community within the municipality of Anchorage. He was instilled with reverence and respect for water: Always wear a life jacket. Don’t go past your knees.

In high school, his family settled in Vancouver. A strong swimmer, Ligons easily made the school’s team though quit after a single year, unwilling to suffer the constant barrage of racist remarks from his teammates.

You don't float. Life jackets do.

Learn how to find the right life jacket for you. Wearing one is best thing you can do to protect yourself in water.

Post-graduation, unable to pay for college, Ligons made the very same decision countless Brown and Black folks have made before him and headed to the military recruitment offices, with the intention to enlist with the Air Force.

At the time, all the recruitment offices were in the same strip mall. Strangely, on a Wednesday afternoon, the Air Force office was closed. Undeterred, Ligons headed to the Navy office only to be intercepted by a Coast Guard recruiter, whose sole question was, “Do you know how to swim?”

Two days later, Ligons was sent off to boot camp “with an Afro, a little overweight” and little knowledge of the Coast Guard. He was asked to fill out an assessment; regarding swimming skills, he chose the option Above Excellent. As Ligons lined up for his swim test, his Black drill sergeant let him know he was the only recruit to make such an audacious claim and advised, “You best swim better than me.”

When Ligons’ turn came around, nearly no other swimmer had passed the test. Ligons entered the water, and his sergeant jumped in after him. Ligons backed up his claim and beat the sergeant.

Seemingly furious, the sergeant grabbed a 250-pound dummy, threw it into the pool and told Ligons to dive after it – and though exhausted, he managed to retrieve the dummy. The sergeant pulled Ligons from the water, told him to stand at ease and informed him that he would be a rescue swimmer.

To deal with the grind and demand of Coast Guard service, Ligons found strength in history. “It meant a lot to me to know other Black people had gone through what I was going through.”

He was particularly inspired by the rescue crew of Pea Island, a U.S. Life-Saving Service (the predecessor to the Coast Guard) station off the coast of North Carolina. It was the first and only station in this nation’s history to have an all-Black rescue crew.

Richard Etheridge, a former slave and Civil War veteran, took command of the station in 1880. Under his keep, his crew saved 30 vessels and nearly 200 lives, only losing seven. Let us remember these rescues occurred during Jim Crow, at the height of lynch mobs; these men were saving the lives of their tyrants. Their heroics and grace would be ignored by the Coast Guard for nearly a century.

While a Black commanding officer was remarkable, Black people swimming would not have been. Swimming, fishing and diving were integral skills for peoples living off the west coast of Africa, skills that then survived the Triangle Trade. Before the Civil War, there was higher swimming competency among Black folks than whites. In fact, we do not see the swift degradation of swimming skills within Black communities till desegregation prompted white flight to suburbs, where private, home-owner-association-owned pools replaced public pools. Municipal pools were closed, even filled in, rather than allow integration. A continuum of inequitable access to water was expanded.

That is how, within a generation, there was a near complete erasure of swimming skills among Black communities, leading us to today where nearly 70% of Black children have low-to-no swimming ability. Nor is it much better for other communities of color: 66% of Asian and Pacific Islander and 56% of Latinx children have low-to-no swimming ability. Indigenous children are twice as likely to drown as their white counterparts.

After Ligons was discharged from his service, he returned to the Pacific Northwest, set about getting a degree and supporting his family. Eventually, needing a career change, Ligons decide to attend a veteran’s career fair at which he was approached by a rep for the Forest Service. In high school, Ligons had participated in an urban youth program with the Forest Service; he left the program with the impression the outdoors weren’t for people who looked like him.

However, the recruiter was persistent, and Ligons needed out from his sales job. He was soon hired as a ranger for Multnomah Falls. To his surprise, he enjoyed the job, fell in love with working outdoors. But the best part was, “talking to the kids and educating people who looked like me,” on conservation and how to protect natural resources – resources that Ligons wants to make sure everyone has equitable access to.

A few years later, Ligons brought this passion and care to Metro’s Oxbow Regional Park. As the sole Black ranger at Oxbow, he was intentional about providing youth of color a positive interaction with a badge. It is difficult work to be placed in a position of representing an entire community, but worth it when he would hear, “Hey, it means a lot to have someone who looks like me in uniform.”

In his new role as a Metro nature educator, Ligons combines his expertise with water and love to teaching, by connecting youth of color to the natural resources they have systematically been denied. He strives to promote equitable access to water, show these youth that swimming is indeed their heritage, educate youth on how water has been weaponized against communities of color, and provide the tools for how best to be safe and have fun around open water.

He says, “I’ve gone my whole life hearing Black people can’t swim. I want to shut that up. I want kids of color to know swimming and water safety are for them.”

Meet Jason Ligons, a Metro nature educator who wants Black and Brown kids to know swimming and water safety are for them. Plus, discover the nature that is in your yard, your park, your trail, and even your sidewalk.