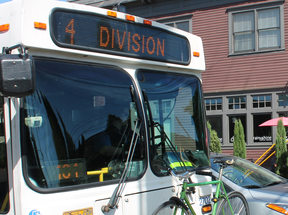 Division Transit Project: What's next, and where we've been

What to know about better Portland-to-Gresham transit moving to the next stage.

Questions and answers
By the numbers
Beyond Division

Beyond better Division bus service: A broader vision for Portland and Gresham

Beyond better Division bus service: A broader vision for Portland and Gresham

But the vision the project's partners have developed provides Southeast Portland, East Portland and Gresham with much more than just faster and more comfortable bus service.

Project partners have created a “corridor-wide strategy" that goes beyond the rapid bus to combine transit, safety, housing and economic development improvements and strategies for everyone who lives, works and travels in the area.

Here are seven improvements coming to the corridor that go beyond the new Division bus service.

To encourage economic development and maintain an area where diverse communities can thrive, the strategy describes projects by multiple agencies that will create and stabilize affordable housing.

At the corner of Southeast 82nd and Division, Metro's Transit-Oriented Development Program is working with ROSE Community Develop Corporation to redevelop an old furniture store into 48 permanently affordable units, along with community space for the Asian Pacific American Network of Oregon.

To improve safety and access for all members of the community, crossings that are not ADA accessible will be upgraded along Powell Boulevard and Division Street. Some of these will be built by TriMet as part of the Division Transit Project; others will be built by ODOT, Portland and Gresham based on their own plans and funding.

From 51st to 170th Avenue on Division and from Cesar Chavez Boulevard to 151st Avenue on Powell, enhancements such as upgraded signal crossings, median islands and crosswalk striping, will provide a safer and more reliable travel experience for those who walk and roll across sidewalks in the corridor.

ODOT also plans to eventually reconstruct Powell completely from 99th to 174th Avenue with sidewalks, lighting, better bicycle facilities and crosswalks. The stretch from 122nd to 136th has already been funded. Planning is ongoing and construction is expeted to begin in 2019.

Gresham has also begun work on its first Active Transportation Plan for a citywide network of safe biking and walking routes.

The Gresham Action Plan, established to complement the Division Transit Project, is a five-year plan that includes support activities for small businesses, promotes new development and reuse of vacant properties and contributes to placemaking strategies.

Division won't be the only street seeing better bus service as a result of this project. TriMet plans to improve existing lines or add new service on several other streets in Portland and Gresham.  TriMet has near-term plans to increase frequency on Line 20-Burnside/Stark. The agency will also consider improved frequency and potentially limited-stop serviceo on Line 9-Powell.

A big priority for the community has been new north-south bus service between 122nd Avenue and 182nd Avenue. That could be possible, along with improved service on several other lines, once the rapid bus begins operating.

Additionally, Powell could be advanced in a major update of Metro's plan for future light rail or rapid bus lines, keeping it on the table as a priority for investment as Portland and Gresham continue to grow.

This is just a sampling of what’s planned for better transportation on greater Portland's east side. But there’s even more than what we’ve listed on this page. Other ongoing projects or adopted plans in the area include:

As a Portland-to-Gresham transit project passes a big milestone, here are some figures that define the project’s journey – and its potential.