What would bus rapid transit look like on this stretch of 82nd Avenue from Division Street south to Powell Boulevard? Planners are presenting scenarios to the community this month.

For nearly two years, Metro and TriMet planners have been talking with the public about bringing bus rapid transit to Southeast Powell Boulevard and Division Street in Southeast and East Portland and Gresham.

The Powell-Division Transit and Development Project line would bring a faster, more reliable bus to inner Powell and outer Division, helping get thousands of riders to class, work and major shopping and service districts. Yet the question of where the bus rapid transit route would connect the half-mile between the two major roads is still unanswered.

Through many hours of conversations with residents, business owners and advocates, 82nd Avenue has received the strongest and most consistent support.

50th Avenue and 52nd Avenue also remain options, but planners have been focusing their efforts on understanding how bus rapid transit could look on 82nd, and what it might mean for the community.

It's an especially dynamic stretch of 82nd: the heart of the Jade District, among the Portland region's most diverse commercial and residential communities, home to a new Portland Community College campus and many businesses like the Fubonn Shopping Center and Wing Ming Herbs. Thousands of residents live within a short walk and transit use is already heavy in the district.

But it's also an often-congested "orphan highway" with few places for people to cross the street safely.

Local advocates share a vision for the Jade District as a walkable, thriving mixed-use community, protecting the diversity and affordability there today, while supporting new investment. Some have said that bus rapid transit on this stretch of 82nd could help.

Watch a video about the community:

What could bus rapid transit on 82nd actually look like? Three scenarios have emerged. As the project steering committee seeks consensus on whether to use 82nd for the bus rapid transit line, they want to hear from the community whethere these scenarios bring the right benefits for the neighborhood and the entire corridor, while creating the reliability that bus rapid transit needs on such a congested road.

This week, project managers from Metro and TriMet sent property and business owners along this stretch of 82nd a multilingual notice that one or more of three design scenarios could impact their property.

It's the first of several outreach activities that project staff have planned, working closely with Jade District leaders.

Metro and Jade District staff will visit businesses in the area Tuesday and be available in the district on several days in the coming weeks for property and business owners to learn more and share their thoughts on the scenarios.

A public open house in mid-January will also invite people to explore the scenarios and provide input to decision-makers before the steering committee meets in February.

The three design scenarios for bus rapid transit on 82nd Avenue between Powell and Division differ in key ways.

One scenario does not change the roadway, but leaves the bus rapid transit vulnerable to the very heavy congestion and unreliable travel conditions that 82nd experiences throughout the day.

A second scenario makes changes to allow the bus to bypass traffic at 82nd's intersections with Powell and Division. This helps bus rapid transit vehicles keep reliable travel times through the area and creates potential gateways to the Jade District, but would impact several properties and businesses near the two intersections.

A third scenario includes the transit intersection treatments in the second scenario, but would also add bike lanes on 82nd between Powell and Division. This scenario would impact nearly all the properties and businesses along this stretch of 82nd and make more significant changes to the road.

What is the right balance? Which of these presents the best opportunity for the Jade District to move closer to its vision? Do better connections to school, workplaces, homes and businesses in the greater Portland region make the potential impacts acceptable? How can strategies like those the city of Portland is developing alongside the transit project help existing Jade District residents and businesses stay in the neighborhood even amid changes?

These are the questions the project steering committee and staff are hoping Jade District community members will help answer. The steering committee will consider their input as it seeks consensus on the route when it next meets on Feb. 1.

Related stories
At the corner of change 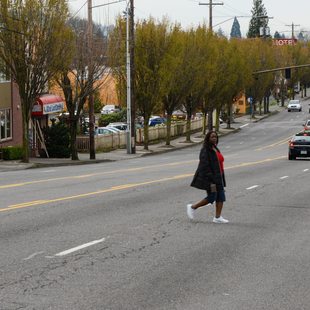