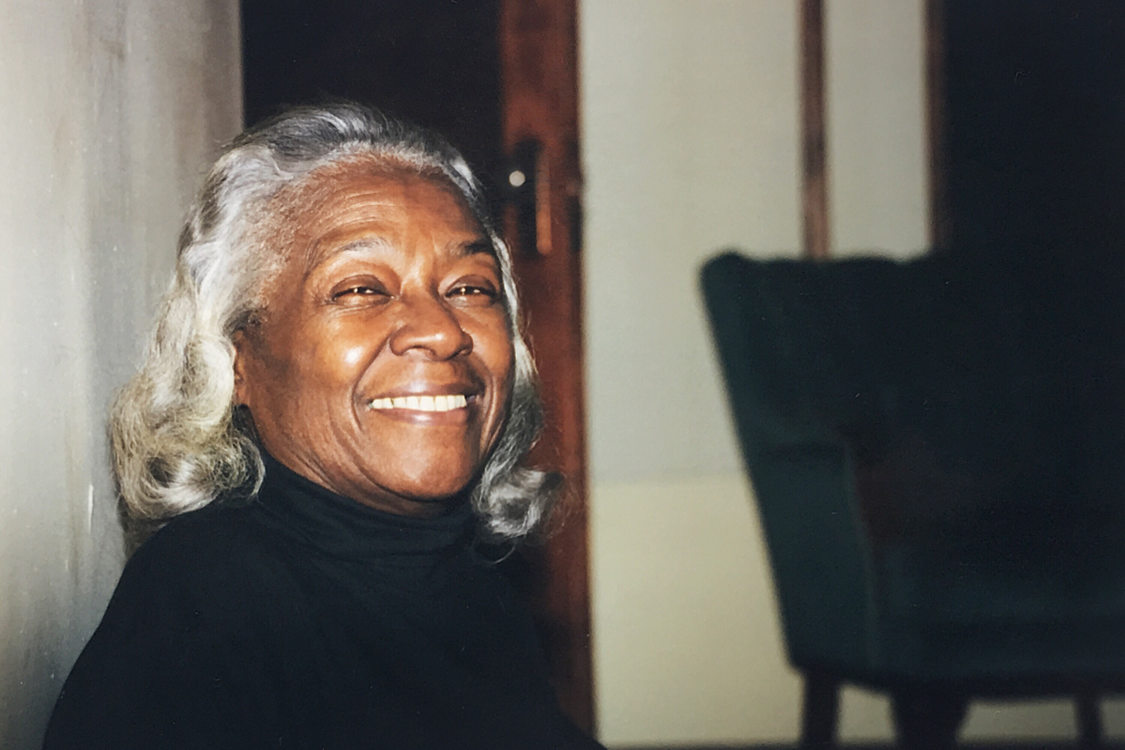 Estella Ehelbe, pictured in 1999, was the first and only black woman to lead Multnomah County Parks before they were transferred to Metro. She broke barriers her whole life and helped keep intact the treasured ancient forest at Oxbow Regional Park. 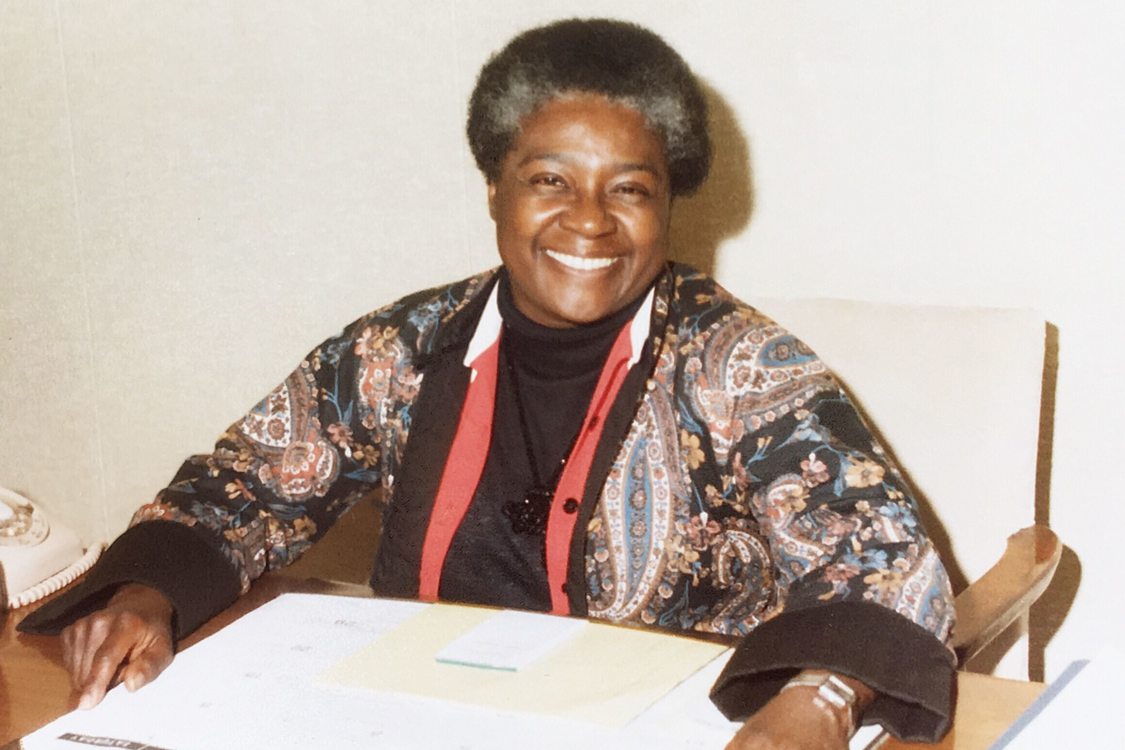 Estella Ehelebe in her office in 1978, when she served as Multnomah County parks superintendent.

Ehelebe in her office in 1978, when she served as Multnomah County parks superintendent. 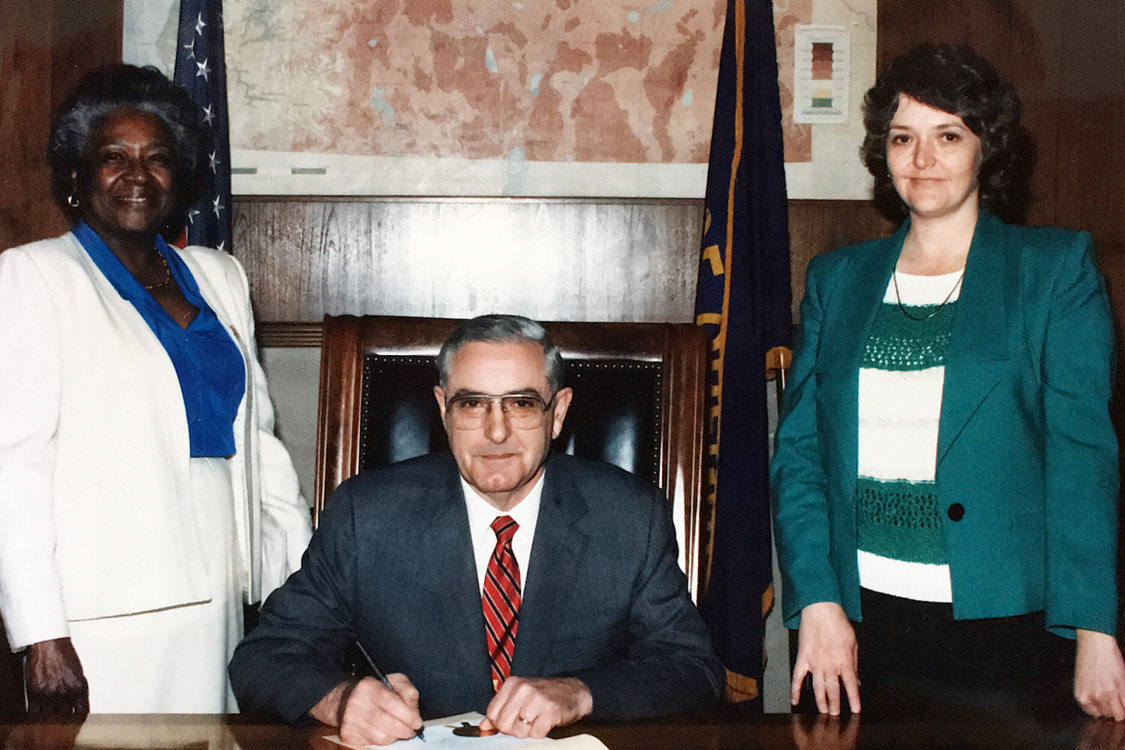 Ehelebe with then-Oregon Gov. Vic Atiyeh during the signing of a bill.

Ehelebe with then-Oregon Gov. Vic Atiyeh and an unidentified woman during the signing of a bill.

Turn any direction in the ancient forest at Oxbow Regional Park, and an expanse of green greets the eye. Moss-covered limbs hang from towering Douglas firs. Sword ferns blanket the ground. A chorus of birds provides the soundtrack.

The beloved forest is intact today thanks in part to Estella Ehelebe, who served as the Multnomah County Parks superintendent starting in the 1970s, about two decades before county parks were transferred to Metro in 1994. She helped fight an effort to remove some trees from the ancient forest, preserving a piece of the rare old-growth forests that once dominated the Sandy River Gorge.

Ehelebe was the first black woman to lead the parks system. She spent her life breaking barriers and serving her community, often in public service jobs. A steely will, eagerness to learn and ability to forge relationships helped her flourish in settings often dominated by white men.

“She was the first pretty much everywhere,” said her daughter, Anjala Ehelebe, a Northeast Portland resident. “People were always underestimating Mom, thinking she was an affirmative action hire. She was quite content to have people underestimate her until she dropped the boom on them.”

Estella Ehelebe worked for Multnomah County for more than a decade and also served on the inaugural Multnomah County Parks Advisory Committee. She died from inoperable lung cancer in January 2007, leaving behind a legacy of advancing racial equity and helping protect trees hundreds of years old at Oxbow.

She was born Estella Mae Allen in June 1928 in Wichita Falls, Texas, and graduated as high school valedictorian when she was 16. World War II was still ongoing in 1944, and her graduating speech was titled “A Blueprint for a New World Order,” according to the local newspaper.

After graduating, she moved with her family to Vanport in North Portland, where her stepfather worked in the Kaiser Shipyards.

“She hated the weather of Texas and the dust,” Anjala Ehelebe said. “She loved the greenness of Oregon and the trees.”

She enrolled at the University of Oregon, where she was among the first black women allowed to live on campus, her daughter said.

While at UO, Estella met her future husband, Fred Ehelebe, who graduated with a degree in education in 1948. Estella graduated with a business degree the same year, though she originally dreamed of studying law.

“Her adviser said ‘give it up, you can’t do it. You’re a black female,’” Anjala Ehelebe said. “She felt a business degree would be marketable if she couldn’t be a lawyer.”

She moved to Japan during the Korean War and worked for the U.S. Army Special Services as a hostess and wrote letters of condolence to families of soldiers who died in the war. She lived with a Japanese family, started learning Japanese and took judo classes, her daughter said.

After returning in 1952, she married Fred the next year, and they bought a house for $7,950 in the Eliot neighborhood of Northeast Portland, one of the few places in the city where black people were allowed to buy homes at the time. The pair had two children, and Estella Ehelebe loved being a homemaker, making clothes and upholstering furniture, Anjala Ehelebe said.

After the two divorced in 1965, she worked at the Job Corps, as a national field adviser for the Northwest Region of Camp Fire Girls, and served as acting executive director of the Oregon Arts Commission before a friend helped her land a job at Multnomah County.

“She never had a job she was exactly trained for; she always learned on the job,” Anjala Ehelebe said. “She was an observer of people. That stood her in good stead when she got into management.”

The 160-acre ancient forest and the campground at Oxbow are owned by the U.S. Bureau of Land Management and are today managed by Metro through an agreement started in 1961 with Multnomah County.

The parcels were a part of what are known today as Oregon & California Lands, a land grant program the federal government established in 1866 to promote the completion of a railroad connecting Portland and San Francisco. Starting in 1937, O & C Lands were intended to be managed for timber production.

Around the late 1970s, BLM officials told parks staff that they intended to remove some dead hazard trees from the ancient forest, said Charlie Ciecko, then an Oxbow park ranger who later served as director of the parks services division. Ehelebe asked her staff to remove the trees immediately for public safety – and told BLM no further action was needed.

“What was special about Estella was that she got the bigger picture and decided it was worth making a statement about,” Ciecko said.

Bill Doran started working as an Oxbow park ranger in 1977 and retired in 2014. “It was her response to BLM that stopped any additional trees from being removed,” he said.

The ancient forest at Oxbow is part of a biodiversity corridor connecting Mount Hood with the Columbia River Gorge, and it supports wildlife not found in other parts of the park. Doran recalls seeing nesting pygmy owls and hummingbirds and a pair of black bears, which raised two sets of cubs while living in the upper stretches of the ancient forest.

“When you look at other pieces of old-growth, it’s often not as intact as that piece at Oxbow is,” Doran said. “It makes it even more valuable to have it so close to a large metropolitan area.”

Estella Ehelebe went on to oversee facilities maintenance at Multnomah County, and she worked to hire more minority-owned businesses as contractors, her daughter said.

She had a no-nonsense attitude. She was driven, and she focused on what she needed to do to provide for her children, said her son, Bob Ehelebe.

“She’d be the only black woman in a room full of older white men, and she’d go ‘Yup, this is the way it is, but we just keep going,’” Bob Ehelebe said. “She tried to control the things she could. She also had a very charming, disarming personality.”

The funny thing is that Estella Ehelebe was never truly an outdoor person, and their father was the one who often took Bob and Anjala Ehelebe hiking and camping as kids. “We’d go to the beach, but my mother preferred her house and yard,” Bob Ehelebe said.

Estella and Fred Ehelebe remained good friends after their divorce and lived next door to each other for decades. Bob lives in his father’s former house, which previously belonged to Estella Ehelebe’s mother. Estella Ehelebe loved to garden, and Bob recalls working together on both their yards.

“Her yard is filled with trees,” he said. “There’s a redwood out front planted the year I was born. My sister got a maple. There’s a Douglas fir in the backyard corner planted when I was in first grade. It’s fun to see it now, 40 to 50 feet tall.”

Though Estella Ehelebe is gone, the trees she first fell in love with in Oregon remain for everybody to enjoy, whether on a quiet neighborhood street or the treasured ancient forest at Oxbow.

Meet the woman who helped save Oxbow Regional Park's ancient forest, and catch up on the latest parks and nature news with the spring issue of Our Big Backyard magazine.

The Oregon Zoo is set to open the doors March 2 to the Zoo Education Center, with conservation and sustainability as the main themes.
Related stories
Metro secures major grant for natural play area at Oxbow Regional Park 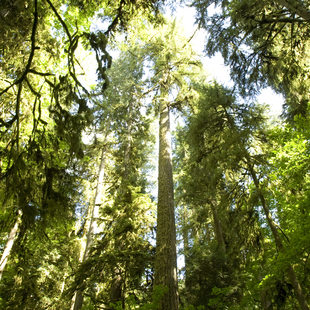