Michael Davis navigates through a corridor of tall weeds, yellowing in the summer sun. A series of winding paths lead to different parts of the encampment, spread out in a wild area beside a storage facility in Forest Grove. This is where Ed and Stacy live -- outdoors. The threshold of their home is a patchwork of tarps and a picket gate that opens onto an outdoor living area in the shade beside a stream. Nautical figurines displayed around the yard remind Stacy of her father, who was a fisherman. Their young cat, Meow Meow, meanders around.

Ed and Stacy have been a couple for 20 years, and have been living outdoors for seven, mostly in Forest Grove. They both have health issues and injuries that impact their ability to work. Finding a home indoors has become increasingly urgent over the past few years, especially after Stacy suffered a head injury that left her with memory problems and seizures. She has also experienced many traumatic events throughout her life, including deaths in the family, sexual abuse and mental health hospitalization.

Today, Michael is helping them prepare to move into their new home – a nearby apartment they were recently approved for. In addition to rent assistance, the couple has a small stipend to help pay for things like furniture and other necessities before moving in, and they discuss different options with Michael. The fund also pays for things like the fees for Stacy to get her first Oregon driver’s license, which could be helpful in her eventual job search. The rent assistance, stipend and case management services are all paid for by Metro’s supportive housing services fund.

“I’m so excited I can hardly see straight. It’s like, for real? Is this really real? Yes it is, it’s real,” Stacy said, reflecting on the upcoming move.  She’s looking forward to simple comforts like making dinner in a Crockpot, taking baths, and cuddling with Ed. Ed points out that the transition to apartment life will be a big one, but he’s confident they can get through it together.

Michael is also here to support them through this life changing transition. As a housing case manager for the Immigrant and Refugee Community Organization in Washington County, he not only connects people with housing and rent assistance, he helps them with many other aspects of their life.

“There is no way for me to put into words just how crucial this role is in the whole program,” he explains, “because you really are that center point where all roads are converging.”

Program participants are referred to IRCO and Michael through the county’s homelessness system intake process and also by word-of-mouth. He has a caseload of 20 households at a time and also does intake for the county’s homelessness management system. Some participants have lost income or can’t keep up with rent increases, such as a retired postal worker whose pension isn’t enough to cover rent. Domestic violence is also a major cause of housing instability, making up about 65% of Michael’s cases. He also works with people who have lived unsheltered for long periods of time and would be considered chronically homeless.

Tackling the challenge of housing placement: “You tell him the situation, he gets it going”

At the beginning of their housing journey, Michael helps people look for a new home, fill out applications and apply for a rent assistance voucher. Finding a place to live can be a challenge in the current rental housing market, where many new arrivals with high incomes mean apartments are often rented immediately after being listed. Additionally, his clients often face barriers like credit scores below what landlords require, no rental history, or past involvement with the justice system. Having rent assistance from the County has been effective with many landlords who are initially reluctant to rent to some prospective tenants.

Anthony is from Beaverton and was couch-surfing with family after losing his housing until a friend told him about IRCO’s program. He reached out to Michael and was amazed at how quickly he was accepted into the program and was able to find housing. He explained that, compared to other programs he has worked with, Michael is very engaged. You don’t have to call a bunch of times before you get a response. He’s been in his new home for two weeks and is looking forward to getting a job and going back to school for his associate’s degree in business.

Tianna is another of Michael’s clients. She recently moved from Salem with her three kids to escape a domestic violence situation. Soon after, her car broke down and she wasn’t able to continue her delivery job. She also found herself in an unsafe situation with the acquaintance who co-signed her lease – a necessity because of her low credit score. Michael worked quickly to get her a rent voucher and apply for apartments. Her application for a house she wanted was denied due to her credit, but Michael remains hopeful the voucher will help with the issue.

“Working with Michael, he gets the job done quick. You tell him the situation, he gets it going,” Tianna said.

Beyond housing placement support: “I’m here for you and you’re worth it”

Once someone is stabilized in housing, Michael helps with practical things like setting up a utility account, job applications and resumes, and getting furniture for their new home. He also makes sure program participants have access to mental health counseling if needed. Perhaps most importantly, he offers emotional support. This ranges from reassuring a participant who has been unhoused for a long period that they deserve housing and reminding them about dreams and goals to just being available for a check-in when needed.

He also helps people build up their confidence in themselves. For example, he might ask someone to tell him about a project they’ve done in the past – perhaps something in an encampment - and points out how that achievement shows intelligence and skill.

“There's a lot of reeducation of the individual to say, ‘hey, you can do this. I'm here for you and you're worth it’,” he explained.

Cultivating trust and a sense of comradery is key to how Michael approaches this work: “One of the things I tell everybody on my caseload is that I'm not just a case manager, I'm your friend. Our paths have merged and we're on this journey together.” In addition to 29 years of experience as a case worker with unhoused people, Michael has also experienced homelessness on three different occasions in his life. This gives him a deep understanding of both the stresses and survival skills associated with homelessness.

He compares surviving on the street to having many files running and open at once in your head. Tasks that might seems simple to a housed person – such as taking a shower – require strategy and planning. For those who also struggle with substance abuse, that makes a difficult situation even more challenging. Then “if one negative thing happens,” he explained, “everything just begins to crash after that. And then it becomes a vicious cycle that causes you to just want to give up.” The mental exhaustion of this constant survival process takes a toll and makes it difficult to prioritize finding services and getting off the streets.

Ed also described how difficult it is to look towards the future while focusing on daily survival tasks like finding firewood and food. He looks forward to being able to spend his time on other things once he and Stacy move into their apartment, including helping Stacy improve her health and hopefully find a job.

The couple was assigned to Michael’s caseload after attending a housing fair in Forest Grove. They had been notified about the event by an outreach worker who periodically visits the encampment. After several attempts to get connected with housing and services over the past few years that eventually fizzled out when contact with the case worker stopped, Ed says this time seems different, with a smoother process. They have high praise for Michael, who describes the relationship as more of a friendship.

Bringing it together: “There’s my brother or sister whose life has changed”

Steve was also assigned to Michael’s case load after attending the housing fair. His wife died from cancer seven years ago and things started to deteriorate for him, eventually leading into homelessness. Health issues have made it difficult for him to work and he’s been trying to get approved for disability for years. He’s spent most nights in a field by himself, struggling with depression that’s made him want to avoid being around other people.

A recent emotional low point made Steve realize he wants to get his life on track and be a father to his son. He moved into the encampment to transition back into society and look for housing in Forest Grove, near his son, in the town where his father also grew up. Now, after only three weeks in the camp, everything is looking up.

Steve is excited about his new apartment, finally getting approved for disability, and looks forward to “being able to organize [his] life so this can never happen again.” He imagines what it might be like one day in the future, driving by the camp site and being reminded of a different time in his life. He credits Michael with working after hours to get him into housing quickly in a difficult rental market, where the first two apartments he looked at were rented within minutes.

Move-in day is always emotional. “We get the keys and we walk into the living room, they’re in tears and they’re just like…they don’t even know what to say.” For Michael, this moment is deeply moving: “I've been doing this kind of work for 29 years, but even today, I can't do it without crying because there's my brother or sister whose life has changed.”

He gives folks about a week to settle in before reaching out to talk about the next phase in their case plan, such as looking for a job or going to college. What he often finds is that program participants start doing this work on their own once they’re housed. “What people in society don’t realize is people on the street have it figured out,” he said. “What they don’t know is how to get over the obstacle of being on the street.” 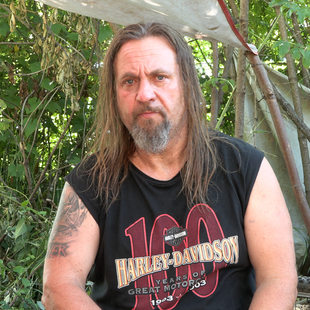 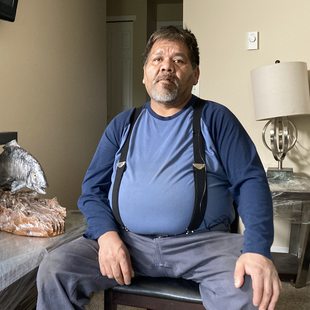 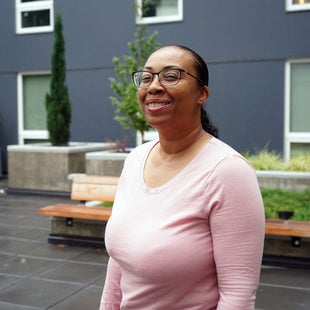 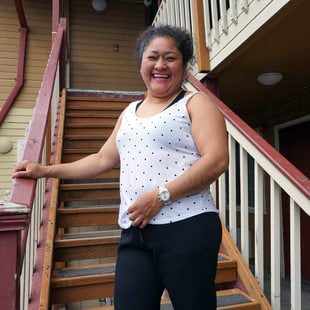