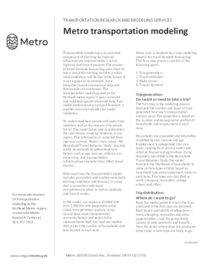 You can learn more about Metro’s modeling tools by watching the Modeling 101 video.