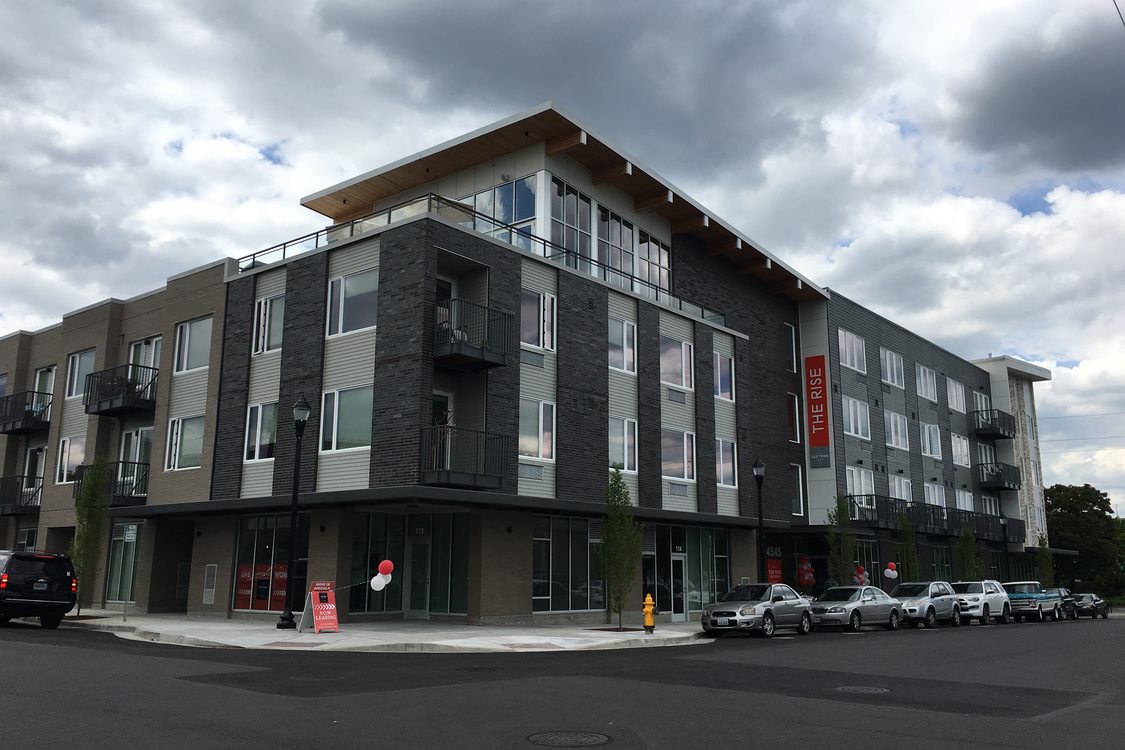 “Welcome to the newest jewel of Beaverton,” said Mayor Denny Doyle at a ribbon-cutting ceremony on May 31 for The Rise at Old Town, a new building that will house residents and businesses.

"It's all part of making this a walkable, livable community," said Beaverton Mayor Denny Doyle.

“It's taken a while, but we're here and we're kicking along to make this happen,” Doyle said.

Doyle and his fellow Beaverton leaders aim to breathe new life into downtown Beaverton and create vibrant neighborhoods around it, such as in its historic Old Town.

This new four-story apartment building with retail space is part of that ongoing effort, which is described in the Beaverton Community Vision and the Central Beaverton Urban Renewal Plan.

The City of Beaverton bought the land at the corner of Southwest Angel and Farmington Road. The $21.4 million project drew private and public investments, including $350,000 from Metro’s Transit-Oriented Development Program. The program invests to create more housing and working options in neighborhoods close to transit, using federal transportation dollars.

“A lot of restaurants are going to appear down here,” Doyle continued. “You're going to be able to walk to about five or six choices of food.”

Doyle remembers a 12-unit townhouse development built in the area about 10 years ago. “That was it in terms of new housing,” Doyle said in an interview during the celebration. “So this is the fourth new building that's been brought to life here.”

Other new buildings in town include La Scala, a project also supported by Metro’s Transit-Oriented Development Program; and the Barcelona, an affordable housing project built by Community Partners for Affordable Housing.

The city recently celebrated a groundbreaking for yet another project in partnership with Metro called “The Rise Central.”

“So it's pretty exciting and it's all part of making this a walkable, livable community,” Doyle said. “You've got a bus stop here. You're five minutes from MAX. You can't argue with it.”

Over the last few years, Metro has invested nearly $1.3 million in transit-oriented development projects in downtown Beaverton, and more money supporting projects in other parts of the region.

These revitalization projects help “create the downtowns that we need for our burgeoning population in the suburbs,” said Metro Councilor Craig Dirksen, who represents part of Beaverton, including historic Old Town.

“There's so much growth in Beaverton,” echoed resident Lisa Bradfield, who stopped by the celebration to tour the new building.

“I'm really excited about it," Bradfield continued. "I was curious to see what the building looked like inside and meet some new people. I wanted to find out more about what's going on in my community.”

The land on which the Rise at Old Town sits used to be a parking lot.

“So the landscape has changed a bit,” said Sandy Ravenswood, who owns a costume shop right across the street from the new apartment building.

“I think if you don't change things or do things to bring people to the neighborhood, then your neighborhood will go stagnant and that's never good," said Sandy Ravenswood, a local business owner.

“I think if you don't change things or do things to bring people to the neighborhood, then your neighborhood will go stagnant," Ravenswood said, "and that's never good.”

Ravenswood has seen Beaverton change, as her shop has been in business for 34 years. She welcomes this new project in the neighborhood.

“I like that it's bringing a newer, younger crowd that might be able to take advantage of us and all the little restaurants and all the little other mom and pop stores in the neighborhood,” Ravenswood said while standing on rooftop deck, after touring the building.

Her only concerns have to do with managing the parking demands that may come with new residents.

The Rise at Old Town was intentionally built within walking distance of transit to encourage walking.

For her part, Ravenswood said she doesn’t mind walking several minutes to the MAX, but she thinks new residents will need a good quality grocery store close by, or they may end up driving to haul grocery bags.

“To have that kind of an amenity in the area you need to have a resident population to support it,” Dirksen said. The apartment building almost has “to come first and then there'll be a reason for a nice neighborhood grocery to move in.”

Doyle said investors and businesses are showing a strong interest in Beaverton.

“This area and the other side of the railroad tracks over by city hall is coming alive,” Doyle said, pointing to more projects in the works that include a hotel, affordable housing, a parking garage and a cultural center.

“They're all going to happen,” Doyle said. “I won't sleep until that happens.”