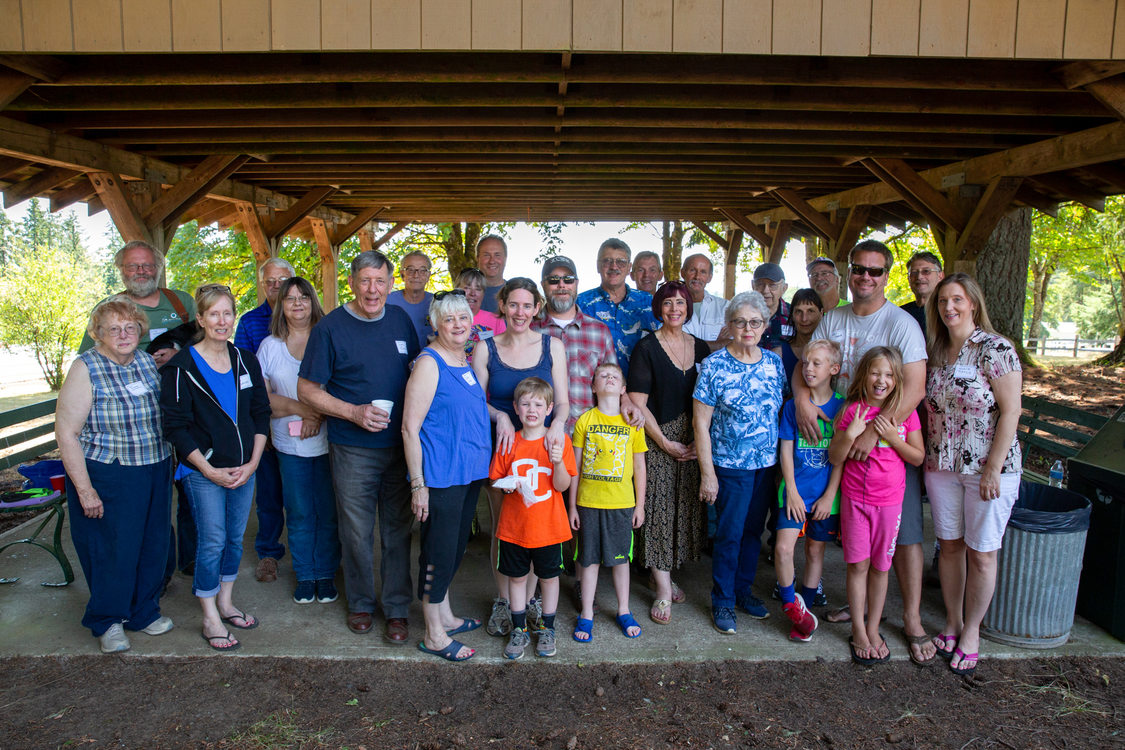 A group photo on August 5, 2018, commemorates the 65th anniversary of the annual Mason Hill Community Picnic.

Mason Hill Park was home to a one-room school house from 1891-1944. Archival photos were on display at the picnic. 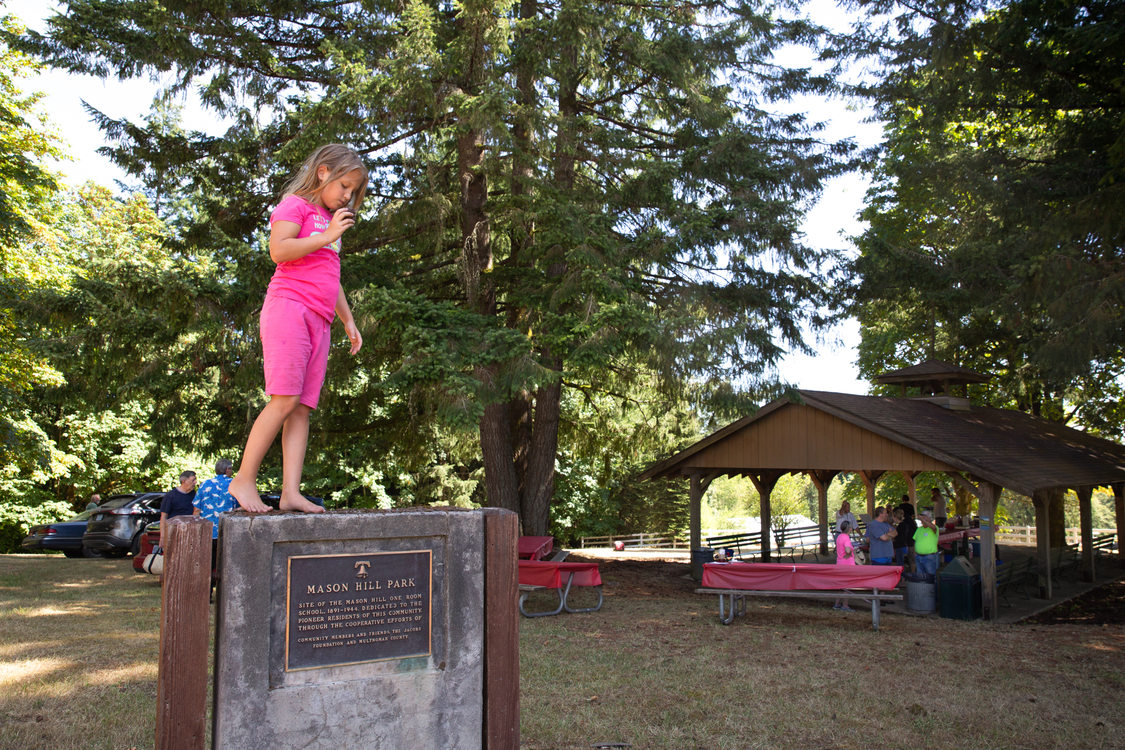 Lexi Pierce came to the picnic with her family and enjoys a brownie while exploring the park. 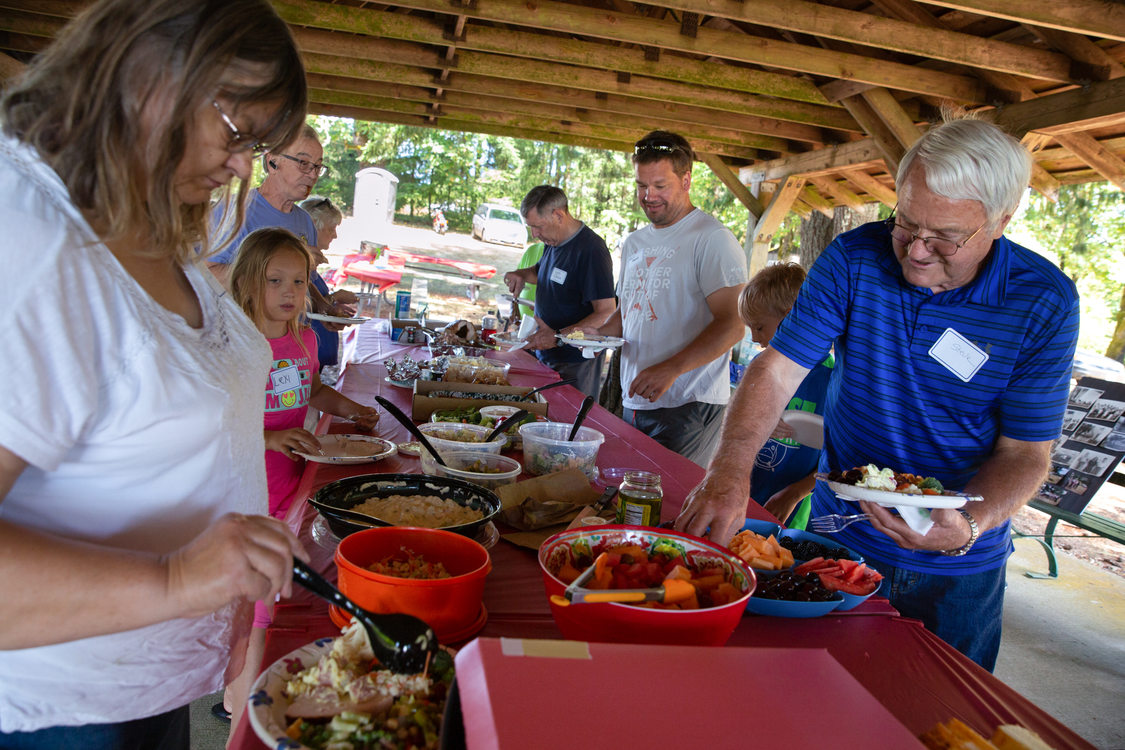 A buffet spanning the length of the picnic shelter was filled with potluck dishes like chicken, lasagna, potato salad, and fruit. The three picnic tables that formed the buffet were made by Harold Johnson, grandfather of Joy Johnson, who took over picnic organizing duties from her aunt eight years ago.

Ed and Deloris Hunziker live on a farm in the area and collectively have attended more than 100 Mason Hill annual picnics. 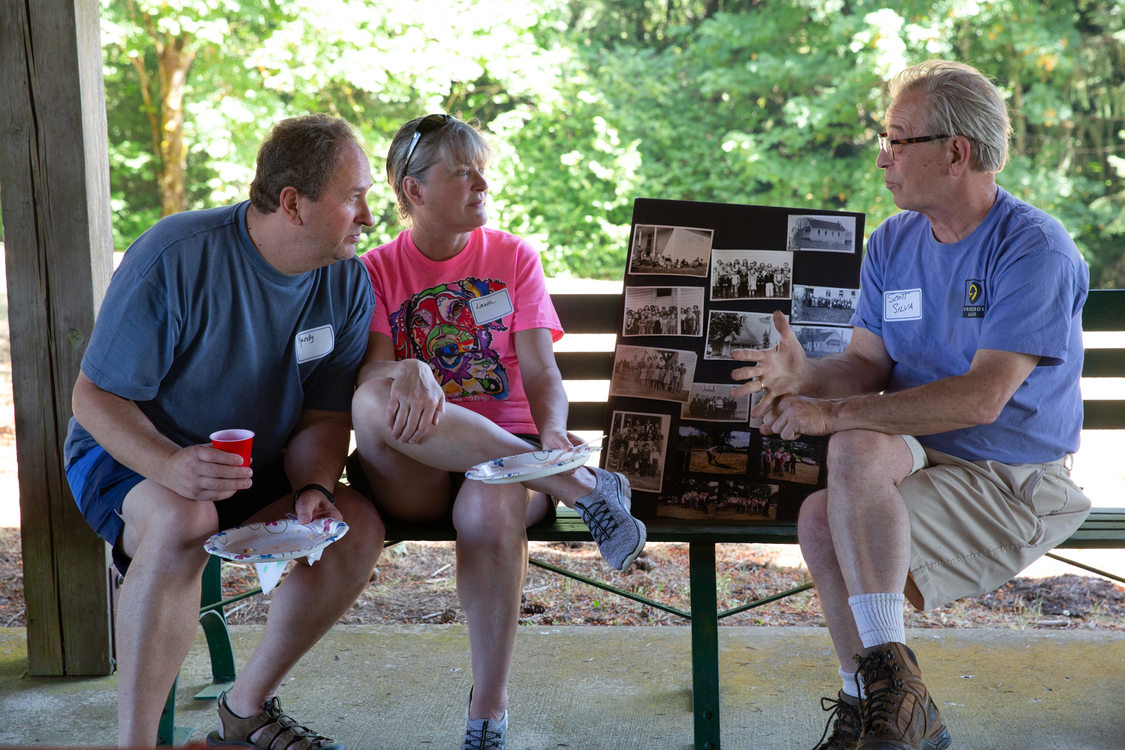 Mason Hill neighbors enjoy the picnic tradtion and said they look forward to it as a chance to catch up each summer. 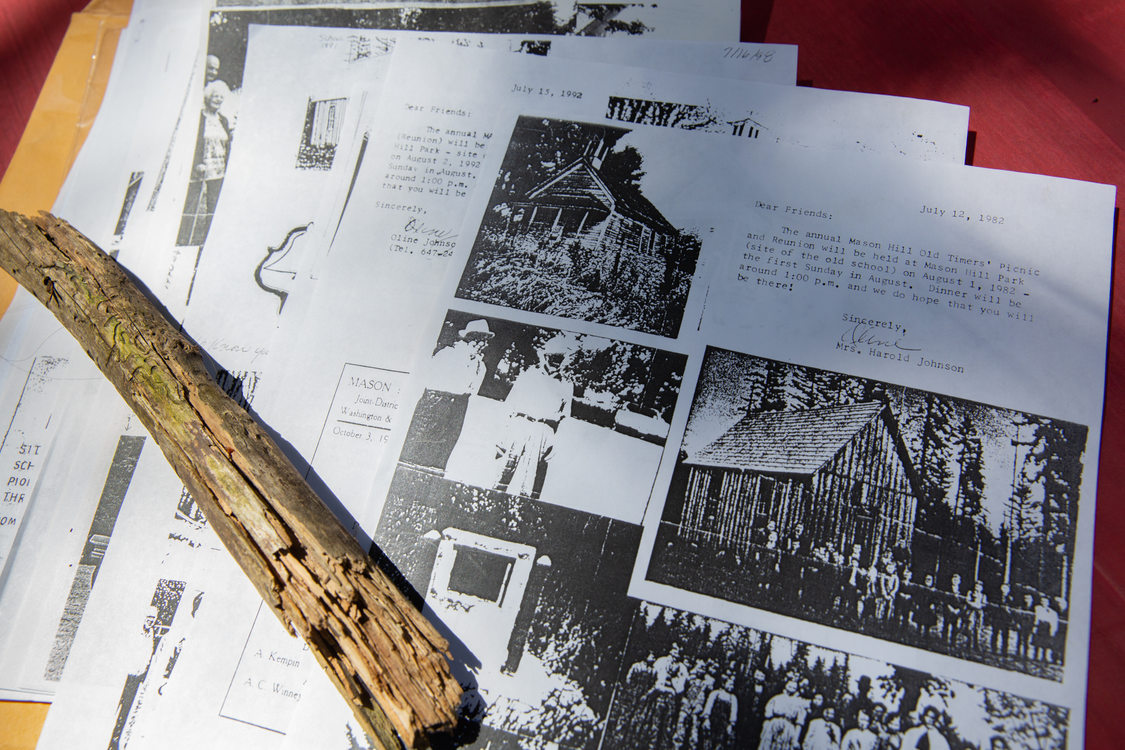 Past invitations for the annual picnic include archival photos of Mason Hill School and previous picnics. Picnic invitations over the years have been sent by several generations of women from the Johnson family. 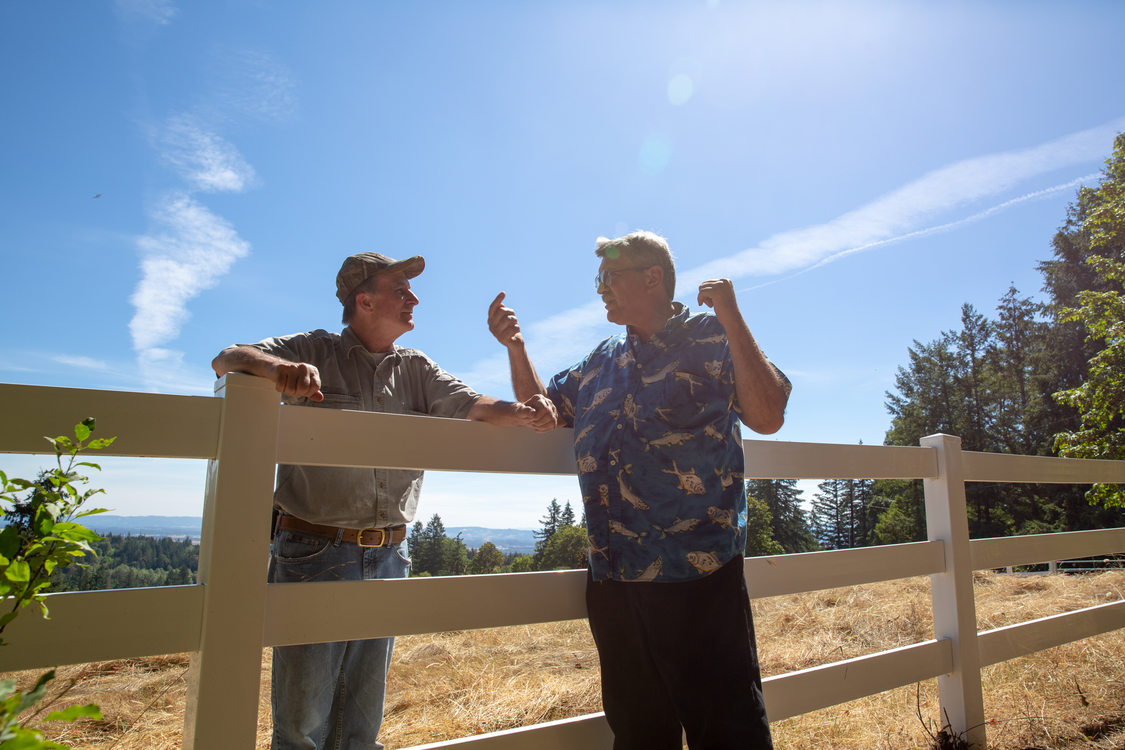 Jim Carlson (left) talks to Bruce Ellis (right) at the fence separating his property from Mason Hill Park as the picnic winds down. Carlson has lived next to the park for 30 years.

On the first Sunday in August at 1 p.m. for the last six and a half decades, people have gathered for a community picnic at Mason Hill Park. At least, that’s the official count. Unofficially, the event extends back much further.

The one-acre park, perched in the North Tualatin Mountains with a picture-perfect view of the valley, was home to a one-room schoolhouse from 1891 to 1944. The potluck-style picnic evolved from what was once a kickoff to the school year, with neighbors gathering to discuss who would board the teacher, get wood for the stove and other school-related matters.

Today, there are no such issues to discuss. But tradition runs deep.

Last Sunday, a half dozen picnic tables were arranged around the park donning red tablecloths while several more formed a long buffet line down the center of the picnic shelter. Around 12:30 p.m., Joy Johnson, the de facto organizer, laid out a guest sign-in book, a donation jar, re-arranged some plastic cutlery and checked her watch.

“Somebody better show up this year, guys!” she said to her husband and a few early arrivals.

Johnson took on the picnic eight years ago when her aunt, Olga Johnson, was no longer able to manage it. Olga inherited the job from Olina Johnson, Joy’s grandmother. And though not certain, Joy Johnson believes the inaugural gathering can be traced back to her great-grandmother.

There was no need for concern. People soon began to arrive, backing their cars right up to the picnic shelter in routine fashion, to unload dishes of chicken, potato salad, fruit salad and so much more.

“Do you have somewhere to heat up this lasagna?” one arriving guest asked.

Over the next couple of hours, 30 friends and neighbors chatted about all matter of things, but conversations invariably led back to local history and family memories.

Most of the picnickers who live in homes or on farms in the immediate area could rattle off names of relatives that attended the one-room schoolhouse back in the day. Some could even point to local roads – like Solberger, Logie Trail and Johnson – named for someone in their family.

Mason Hill is located on Northwest Johnson Road. The property was transferred to Metro from Multnomah County in 1994.

Sue Phillips was no exception. Her mother and grandmother went to Mason Hill School, and she has memories of attending the picnic with them as a young girl. She lives in Tillamook now and made the 1.5-hour drive to honor her mom, who loved coming to the picnic but passed away in June.

The event has quieted down from what it once was, but locals still enjoy coming together to meet new neighbors and catch up with longtime friends.

“It used to be packed,” said Phillips, remembering the annual picnics of her childhood. “There were so many people. It was a lot of fun and they had baseball games. People stayed until it got dark.”

Ed Hunziker, 85, is a retired farmer. Collectively, he and his wife Deloris Hunziker who live just down the road, have attended well over 100 Mason Hill picnics.

He recalls the 1962 Columbus Day windstorm that caused widespread damage in the area and destroyed the vacant schoolhouse.

“I had the only tractor with a blade and drum on it. Everybody was talking about getting somebody to do their logging because there was so much blow down. We salvaged logs for two or three years around here,” Hunziker said. “After that I got invited up here to [what was then called] the Old Timers' Picnic.”

Making quick work of clean up after most of the guests had left, Johnson was pleased with the turnout.

While there aren’t many “old-timers” left to discuss their school days at Mason Hill, there is plenty of local lore. Johnson’s motivation for carrying on the picnic tradition is simple.