On Monday, August 13, the steering committee recommended the route for the Southwest Corridor light rail line, the 12-mile passage from downtown Portland to Bridgeport Village in Tualatin. Over the past seven years the project identified more than 60 routes as ways to bring high capacity transit to the area.

The steering committee unanimously voted for the option that sends the train on Southwest Barbur Boulevard instead of Naito Parkway. The plan calls for continuous bike lanes and sidewalks on Barbur until the Barbur Transit Center, even in the Barbur Woods area.

The train would run through the middle of Barbur Boulevard instead of alongside Interstate 5. This decision would not reduce the number of lanes on the road.

In Tigard the proposed train would travel on 70th Avenue until Elmhurst Street, cross over Highway 217 and run east of Hall Boulevard, travel next to train tracks until it splits off to Bridgeport Village.

The route recommendation marks a major milestone for the Southwest Corridor Plan. The project is still in the early stages. As the route gets more defined, planners are working to minimize impacts to homes and businesses.

View a larger image of the light rail route recommendation.

Live, work, travel or just have an interest in the Southwest Corridor?

The public weighs in on the Southwest Corridor Plan 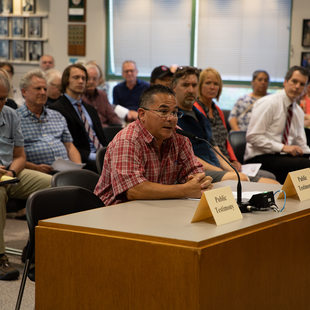 The public weighs in on the Southwest Corridor Plan