Early one October morning on Southeast 122nd Avenue, the parking lot of nonprofit Cultivate Initiatives is bustling. People gather under a canopy to eat breakfast, drink coffee, chat and pet the dogs that are milling around. Others start loading a trailer with gear for the day’s cleanup activities.

Metro recently awarded the nonprofit $100,000 from $10 million in cleanup funding that was approved in a bill passed by the Oregon Legislature earlier this year. Metro’s regional cleanup strategy focuses on spending the state funds in ways that will have immediate impact and serve communities most affected by dumping and litter. The funds can’t be used to remove the belongings of people experiencing homelessness.

The idea is that the portion of the state funding that goes to nonprofits will strengthen and sustain organizations that are leading cleanup efforts in underserved areas. Trash for Peace, a nonprofit that aims to “build community-led and equitable waste reduction and recycling systems” has also received state funds to expand its operations.

Cultivate Initiatives offers mobile showers and basic health services, connects people experiencing homelessness with case management and peer support, and offers them the opportunity to work in their cleanup and property stewardship programs. Building relationships is at the core of what they do.

Three times a week, paid interns on their Community Beautification team head out to pick up trash and junk around East Portland and East Multnomah County. Getting an internship is intentionally “super low barrier,” says Matt McCarl, community engagement and action director at the nonprofit. Internships last two weeks. People work 7-hour shifts for $15 per hour, for a maximum of $600 – untaxed and paid in cash.

For some, McCarl says, “it’s an onramp to a new start. People want to be in community. Work and a shower go a long way.” So far, 30 people who started out as interns have been hired on to fulltime positions in the organization’s cleanup, shower, shelter and property stewardship programs.

The state funding has allowed the organization to expand substantially. “One of the big problems we had was getting people to the cleanup sites,” McCarl explains. Their two existing trucks could only carry a few passengers. Enter Brutus – a large white truck which can carry more interns – and a trailer to go with it. In total, Cultivate Initiatives is spending $100,000 to buy the truck and trailer, to expand the internship program and to pay for tools, shovels, gasoline, sharps containers and other supplies.

“No matter where you live, everybody likes clean.”

On this October morning, the Beautification Crew heads to a street in East Portland where a few tents and RVs are lined up near an apartment building.

Jay, a cheerful man with a broad grin, is the truckdriver and the crew lead. He directs one intern to take breakfast to the people living in the tents and gives instruction on the cleanup to another. He is a graduate of the internship program and a fulltime employee. He heard about the cleanup work from a friend’s girlfriend about a year ago.

“It changed my life. I was on the streets for 16 years. Now I have a fulltime job and an apartment. I wake up in the morning and get right up.” He shakes his head, smiling. “I never thought I’d be working again. I got my license back after 23 years.”

Are people living outside suspicious when the crew arrives? “I just talk to them like they’re me. We hand out waters and breakfasts. I’ve been there. No matter where you live, everybody likes clean.”

“It amazes me every day, it looks like a different place after we’ve cleaned up,” he says. The Beautification Crew has collected 800,000 pounds of trash so far. Jay says, “I’m going for a million before the end of the year.”

At Trash for Peace, Alondra Flores Aviña, environmental promoters manager at the nonprofit, says they are implementing the Metro funding. Bulky waste collection events – think appliances, mattresses, couches – will be a focus.

Appliances, furniture and mattresses can be difficult and expensive to dispose of safely. Often, they end up dumped in or near an apartment’s trash enclosure, causing safety hazards or blocking access – with no system in place to remove them.

The Environmental Promoters Program grew out of long-held dissatisfaction from people living in apartments with their trash and recycling services. Trash for Peace, in partnership with Metro and other organizations, runs six-month courses in recycling and waste prevention for interested residents. These trained environmental promoters are paid to share what they learn with their neighbors and to work on projects that benefit the community – making art out of recycled materials, hosting clothing swaps, or teaching tips for reducing food waste.

“Right now,” Aviña explains, “there’s a huge need in apartment complexes and low-income housing to get rid of bulky waste. This funding will give residents the opportunity to lead on planning bulky waste collection events: how they want to deal with bulky waste and what works best for them.”

Trash for Peace has also used the funding to build capacity in their other programs. The nonprofit will expand their already well-established tent-side trash service to create a crew dedicated to seeking out and disposing of trash in areas where thousands of pounds have accumulated.

New projects include a warehouse where clothing, furniture and large household items will be repaired and prepared for reuse and redistribution to residents living in affordable housing, and trash collection tricycles, which will soon make their debut on the streets. 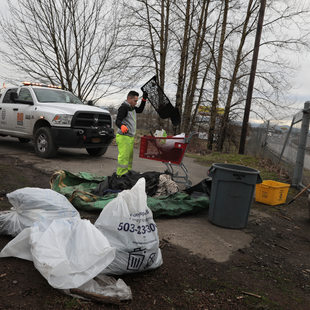 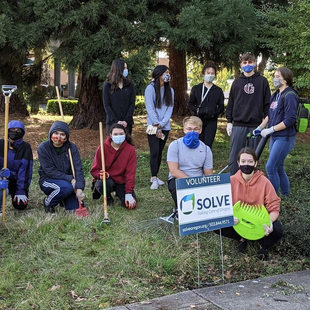 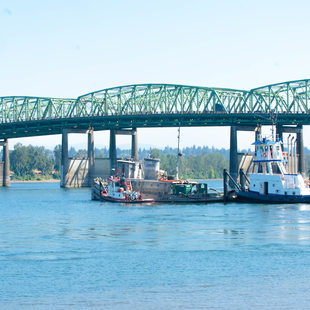