Recycling facilities around greater Portland are significantly narrowing the types of plastic they accept, citing changes to global markets making it too hard to sell those plastics. There is no timeline for when markets may once again be hospitable for a range of everyday plastics, from produce bags to take-out containers.

That leaves only two types of plastic accepted at Far West: bottles that are either #1 PET or #2 HDPE.

It’s likely that other facilities will follow suit, and that drop-off locations, such as grocery stores that now take some containers, will also curb what they collect.

These changes do not currently affect what people around the region can recycle at home. But, says Metro recycling and resource conservation manager Matt Korot, “we’re staying on top of these changes and will know more in the coming weeks.”

Far West operates several facilities around the Portland area where customers can bring a range of items for recycling, including many types of plastics that cannot be recycled in the region’s home collection system.

Can you skip the plastic?

Plastic is one of life’s short cuts. And recycling it is great – when you can. But, says Metro recycling expert Patrick Morgan, there are some easy ways to cut the amount of plastic you end up having to toss.

A quick rinse of the bags that held your lettuce or broccoli can double the bag's life. Once they’re dry, keep them with your reusable grocery bag in a place where they’ll get used – like your car or bike bag. You can also double up items in bags, or use cloth or mesh bags.

Pass on the package

Delicate cherry tomatoes transport well in containers, but consider buying slicers instead. The same goes for bagged fruit and veggies.

Make a salad instead

Those deli containers are convenient on the run, but some quick weekly prep at home can save you some plastic recycling angst – and some money, too.

When it comes to plastic, consumer choices are limited. And that’s frustrating. But reusing your produce bags, making an occasional lunch, or keeping your reusable drink container close at hand can reduce the everyday use – and disposal of – plastic. It’s a start.

The list of items you can recycle at home – such as newspaper and tin cans, as well as common plastic containers like yogurt tubs and shampoo bottles – comes out of a regional planning process that includes Metro and local governments. The current list was built around items that had the most dependable markets, that is, items that can be sold as raw material and made into new things.

Plastics you can recycle at home are sold and reused through a mix of domestic and global markets, with some being recycled within the U.S. In the global market, says Korot, China is the biggest purchaser of recycled plastic. Recent changes in what Chinese markets accept are causing the changes at local facilities, as well as elsewhere in the U.S.

So what does this mean to everyday recyclers in greater Portland?

It’s important to remember that these changes do not currently affect home recycling standards. Know what goes in and what stays out of your bin at home.

But many plastics can’t go in your home bin. This situation is particularly confusing since many plastic containers are imprinted with the circle of arrows that we’ve all learned over the years is supposed to mean it’s recyclable. But in fact, those arrows and numbers are part of an industry language that indicates the type of plastic it is, not whether it goes in the bin.

The bottom line is that if you‘re in the habit of dropping off those hard-to-avoid plastics like the clear hinged food containers – called “clamshells” – that hold things like cherry tomatoes and deli salads, well, that stuff is basically garbage for now. Other items, like produce bags and some food containers, may still be accepted at grocery stores that work with recyclers that sell into domestic markets. You can search for options for recycling plastic in Metro's online database.

Korot says that with Metro now developing a new plan for managing garbage and recycling, more consumer choices could be a part of that vision. “The impact of what we throw away starts when that stuff is produced and packaged," says Korot. "We’d like to get to a future where all of the product and packaging options presented to consumers are sustainable choices.”

Take Metro's survey about the future of garbage and recycling

Related stories
Plastic: What to keep out of your home recycling 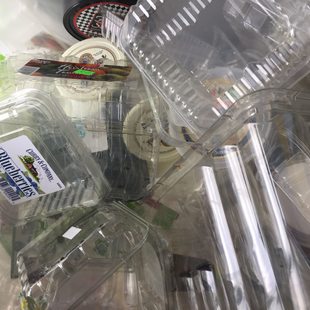