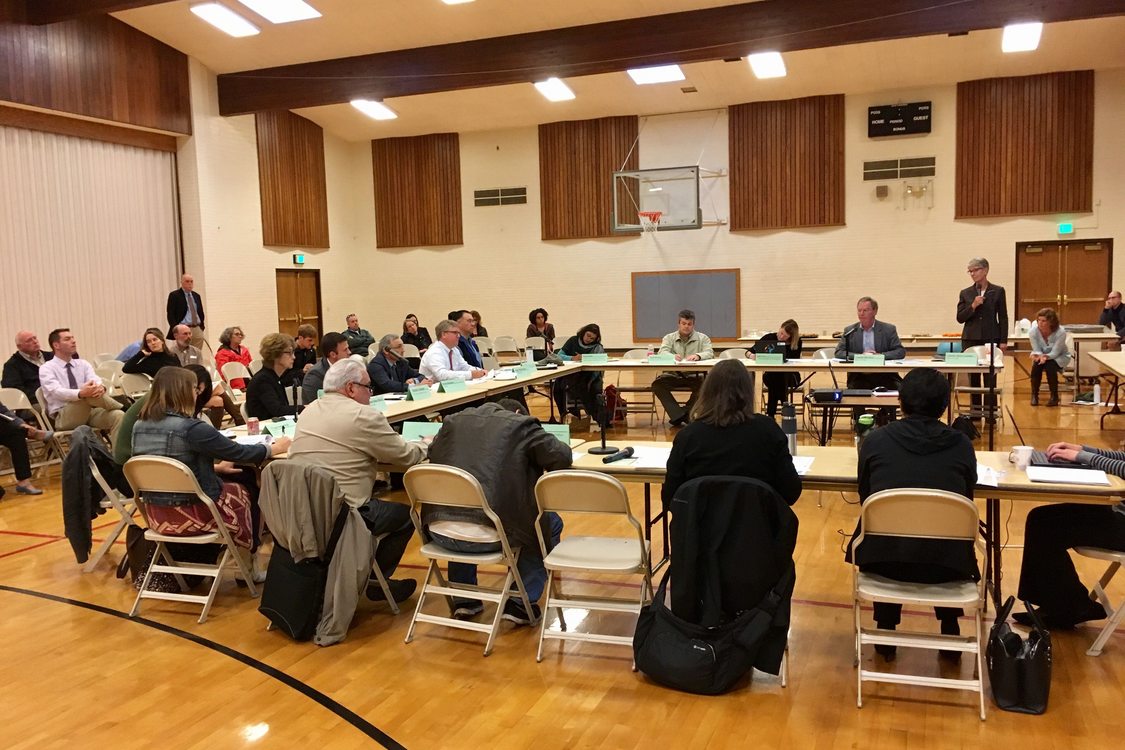 The Powell-Division Transit and Development Project steering committee, whose members include elected leaders and community representatives from throughout the Portland region's eastside, met Oct. 3 at the Church of Jesus Christ of Latter-Day Saints in East Portland. In the second of two meetings in two weeks, the committee dug into budget challenges and options to use a rapid bus line investment to benefit other areas of east Multnomah County. 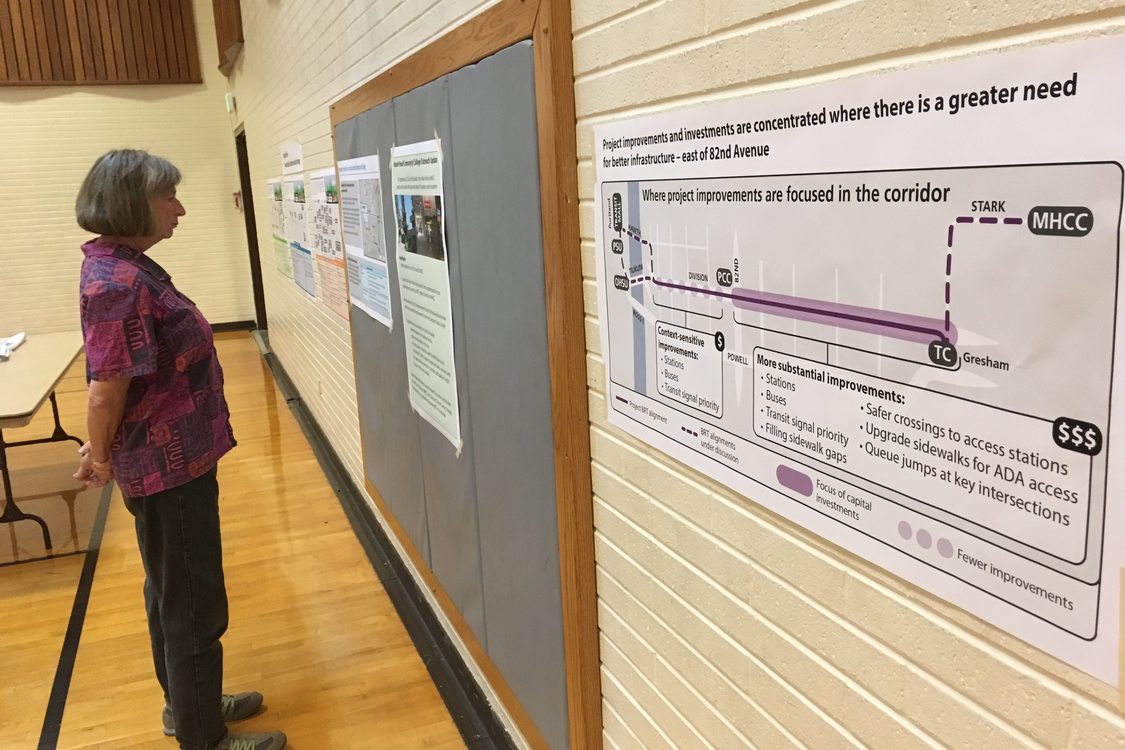 A member of the public reviews posters at the Powell-Division steering committee, including a map of the proposed bus rapid transit line's investments between Portland and Gresham, at right. 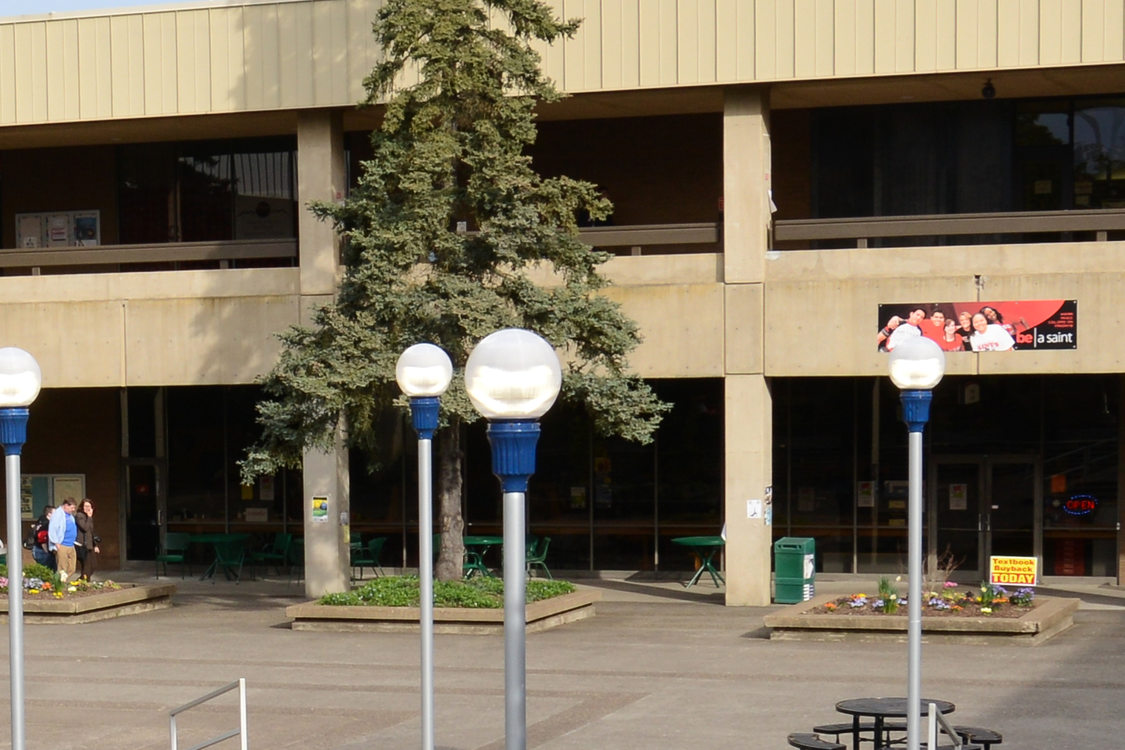 The campus of Mt. Hood Community College, in Gresham.

The campus of Mt. Hood Community College, in Gresham. As budget challenges make reaching the college with the bus rapid transit line look challenging, the steering committee is grappling with how to ensure that students and staff can still get better transit access. One option: improving local service on TriMet's Line 20-Stark, which connects the college to Rockwood and the Gresham Transit Center.

A committee leading plans for a new rapid bus service between Portland and Gresham continues to grapple with balancing costs and service, as a route recommendation deadline approaches.

The committee, whose members include elected officials and community representatives from throughout the region's eastside, met twice in the last two weeks to explore the scope of the proposed Powell-Division Transit and Development Project.

Planners from TriMet and Metro have told the committee the project needs to keep costs below $175 million in order to be competitive for $100 million in federal funds to build it. That’s $50 million less than the expected cost for a line that had been envisioned to stretch 16.5 miles from downtown Portland to Mt. Hood Community College.

As envisioned, the rapid bus line would use longer buses that stop less frequently and board more quickly, and use traffic signal technology to get around traffic and cut travel times for bus riders. Current plans call for the line to follow the route of today's 4-Division bus, though the steering committee hasn't yet formally recommended that route.

The project steering committee needs to agree on what's known as a "locally preferred alternative" – a recommendation for route, station locations and mode – by this fall to keep the project on schedule to obtain necessary federal funding for a projected opening in 2021.

Planners from Metro and TriMet suggested in early September that much of the cost cuts to get the project to $175 million could be achieved by moving the project’s east end from Mt. Hood Community College to Gresham Transit Center, a couple of miles west.

They said that improving bus service on other lines – particularly upgrading the 20-Stark – could be as good as or even more useful to Mt. Hood Community College students and staff than the bus rapid transit line. Most of the transit riders to campus today use the 20-Stark, which connects the campus directly to the Rockwood and Hazelwood areas, where many of its students live. The line also connects the campus to the Gresham Transit Center.

At a Sept. 26 meeting in East Portland – the first after the proposal to remove Mt. Hood Community College was released – many steering committee members were frustrated with that idea.

"I feel like there were promises made," Gresham City Councilor Lori Stegmann said. "We have been so starved for resources in East County."

At the Sept. 26 meeting, several committee members asked to see more financial details so they could understand how removing the college from the line emerged as the most feasible option for getting the project budget down to $175 million.

On Monday, the committee got that chance, with a "deep dive" into project cost presented by TriMet project manager Kelly Betteridge and other Metro and TriMet staff.

Betteridge's presentation shared the costs of every aspect of the full project, including: $107 million for 82 station platforms and related improvements to help people get to them; $46 million for roadway, signal and utility work along the route; $20 million for pedestrian and bike improvements along the route but not at stations; and $51 million to buy 28 “accordion” buses and build maintenance facilities for the extended buses, which TriMet does not yet have in its fleet. Those estimates, she noted, include escalation, finance and contingency costs and will be refined as project design continues.

Tweaking station design and operations and the maintenance facility upgrades could shave around $18 million from the overall cost estimate, Betteridge said. But that still leaves more than $30 million to cut to reach a $175 million budget.

Digging into the numbers, the committee and Betteridge discussed other options to find those savings. For instance, cutting about half the station platforms might save enough, but would likely severely reduce ridership and make federal funding hard to obtain, Betteridge said. Removing downtown Portland from the project would cause similar harm to its viability while only saving $4 million, she said.

After more than an hour of discussion, several committee members remained disappointed with the idea of not reaching the college, but turned their attention to how to secure better local bus service there, even if the rapid bus doesn't make it that far.

Several east Multnomah County representatives who had been most concerned on Sept. 26 suggested compromise would be possible – if TriMet firmly commits to other bus service improvements. Discussions between TriMet, Metro and those representatives have already started, said college board member Calcagno.

"We have a process in place to develop a contract of commitments from TriMet and regional partners that is a package of transit improvements that would better serve Mt. Hood Community College," Calcagno said. "I'm optimistic and I'm hopeful that that process provides a good, solid, reliable and adequate transportation solution for Mt. Hood."

Those sentiments were echoed in a letter the community college's board sent to the steering committee Wednesday.

"Short of adding the college back into the transit route, the only acceptable alternative is to have a firm commitment from TriMet to enhance the frequency of Bus Line 20-Stark alongside other transit investments to serve the public transportation needs of MHCC students," the board members wrote.

Stegmann, the Gresham city councilor on the committee, said the opportunity for federal funding would be hard to pass up in the near term, even if reaching the college had to wait for a second phase of the project.

"We're going to have a huge population moving to this area in the next 20 years and it's only going to get worse," Stegmann said. "I don't think we can turn up our noses at $100 million, but I completely agree we need to have a terminus (at MHCC) and I'd like to see that as a phase two."

While acknowledging that the project's scope was now smaller than they'd hoped, several other committee members suggested that even a reduced project is worth the benefits it could bring to people along its route.

"We've narrowed our focus here and we're down to a much smaller improvement," said Oregon Department of Transportation regional manager Rian Windsheimer. "But it is a step, in my mind, in the right direction, in improving travel options and improving access for folks from East Portland to get into the city."

Portland Bureau of Transportation director Leah Treat agreed. Though she said she wanted to learn more about how the project could make better local bus service elsewhere in the corridor possible, she pointed to the ability to use the project to build a number of improvements Portland has long prioritized for Division Street, a high-crash corridor.

"BRT is going to bring a whole bunch of other improvements along Division that we haven't talked about that are in this package," Treat said, mentioning protected bike lanes on Division and other active transportation improvements that could come with the project's installation.

In a Tuesday letter to Metro Councilors and steering committee co-chairs Bob Stacey and Shirley Craddick, Treat and Portland Transportation Commissioner Steve Novick also praised the project's potential to benefit riders of the 4-Division, one of TriMet's highest-ridership lines.

"It is urgent to improve the overcapacity transit line that current serves many transit dependent people in this area," Novick and Treat wrote, adding, "This is our chance to bring $100 million of federal money to an area that needs investment now."

On Monday, Treat said that Portland might be able to contribute more to the project from transportation fees it collects from new development. Combined with $8 million it has already committed and $25 million each committed by TriMet and Metro, that would put the project closer to the $75 million it needs to raise locally to match the $100 million federal grant.

Committee meets again Oct. 24, with an eye on what's next

The steering committee is scheduled to make a route and general station location recommendation when it next meets on Oct. 24, though project staff have reserved an additional meeting date in November if it is needed.

The recommendation would then go before each of the official project partners – the Metro Council, the TriMet board, city councils in Portland and Gresham, the Multnomah County Commission and the Oregon Department of Transportation leadership – for approval. Environmental analysis could begin in the spring, with a formal federal funding application next summer in order to keep the project on schedule for a 2021 opening.

Craddick said the committee's members should keep advocating for getting the line to Mt. Hood Community College as a future phase – in addition to making progress on a long backlog of other transportation projects east of Interstate 205. She pointed to an upcoming update of the region's long-range transportation plan and transit strategy as opportunities to get Mt. Hood Community College at the top of the priority list.

But she said the region's eastside will have to work hard to advocate for its needs – because other communities also have their own priorities, and there's never enough money to go around. 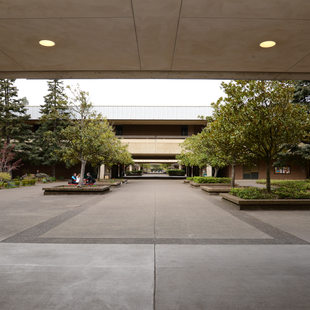