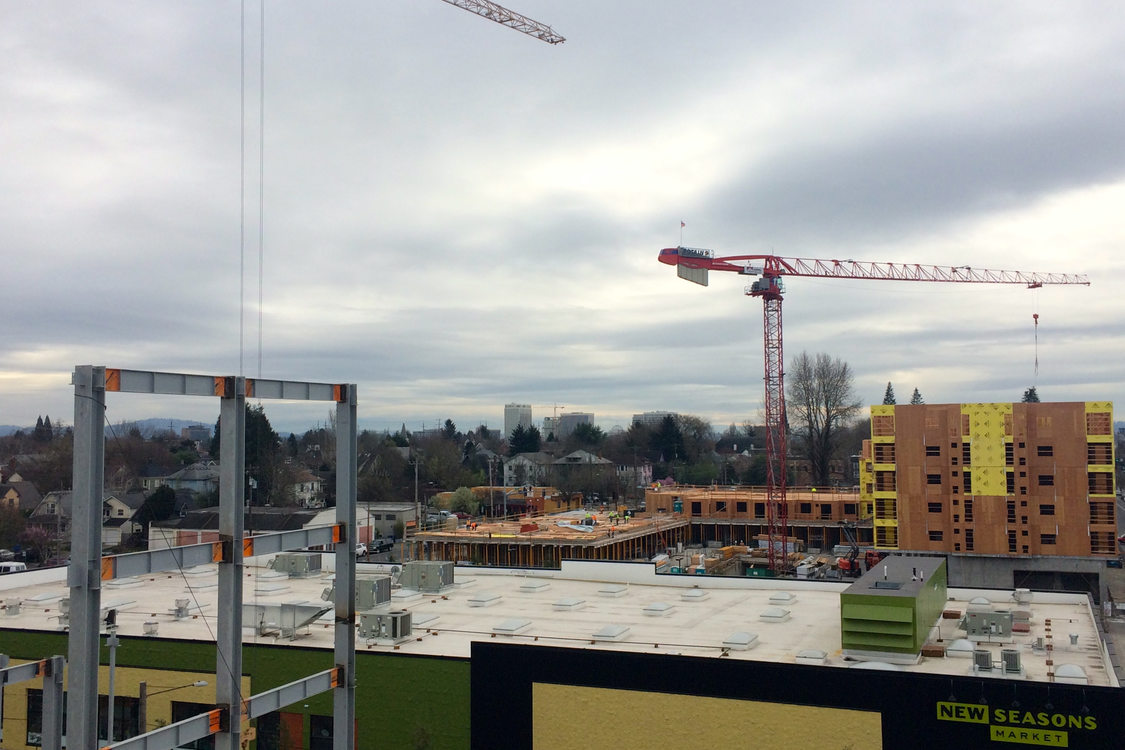 Cranes soar over the One North development on North Williams Avenue in Portland.

Cranes soar over the One North development on North Williams Avenue in Portland. 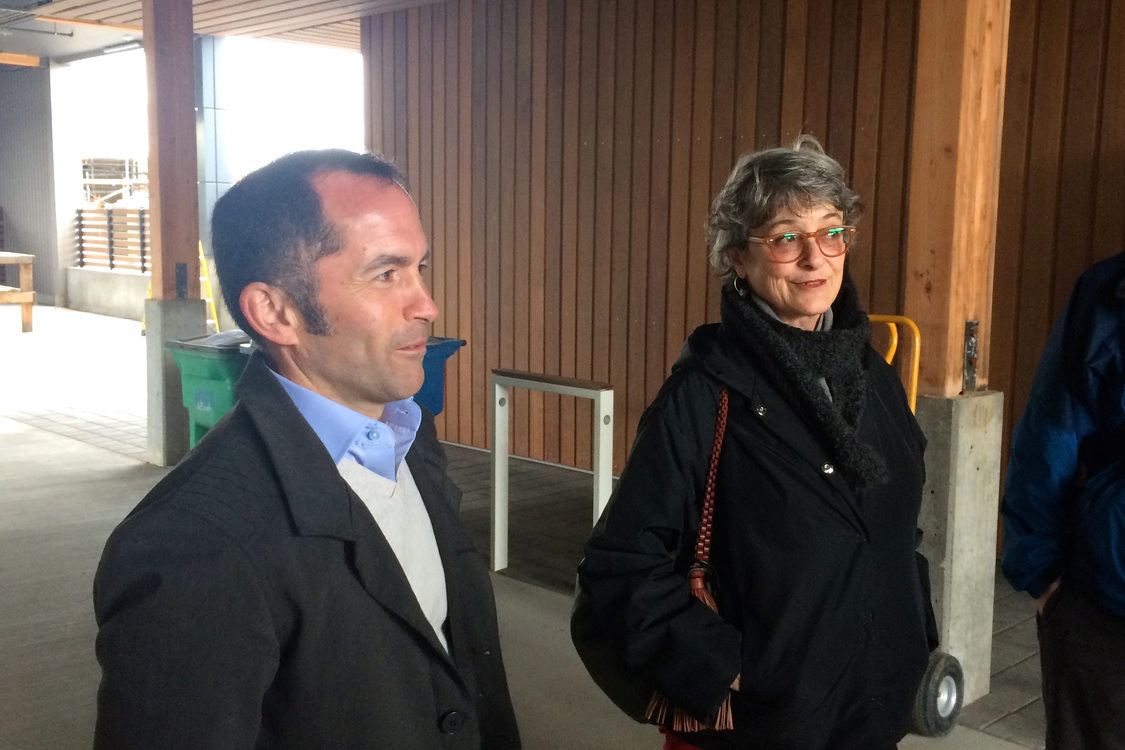 Developer Ben Kaiser and Metro Councilor Carlotta Collette talk in the first floor parking garage of The Radiator in Portland.

Developer Ben Kaiser and Metro Councilor Carlotta Collette talk in the first floor parking garage of The Radiator in Portland. 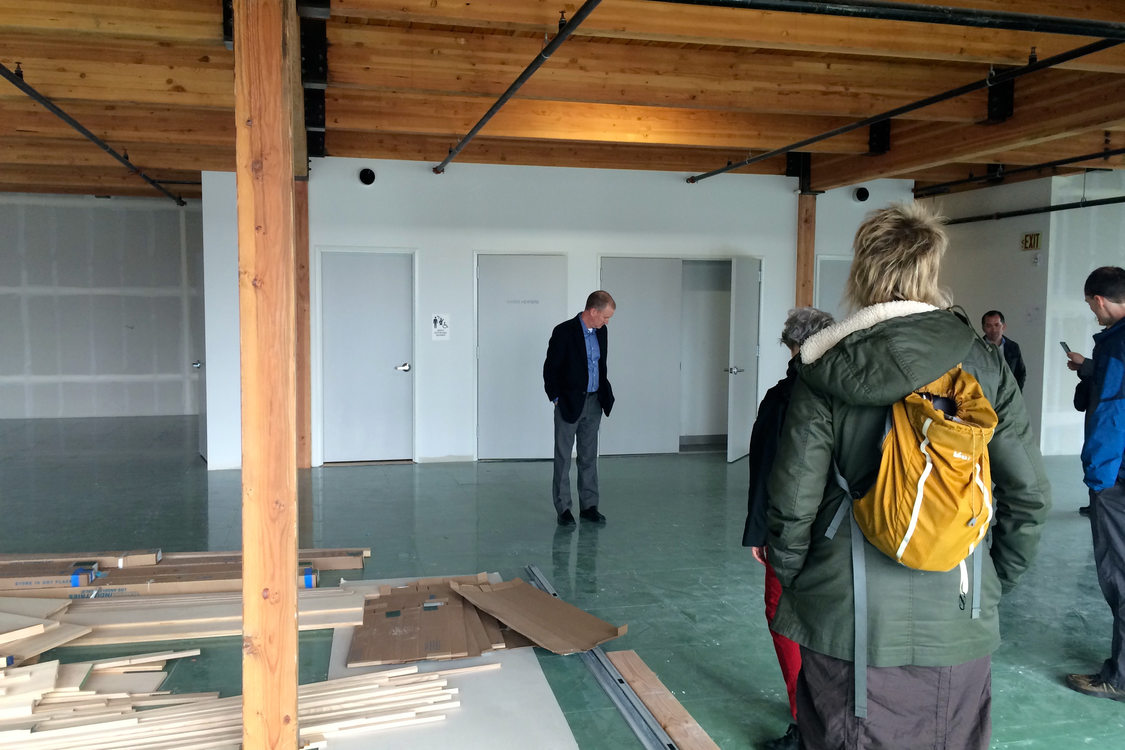 Visitors examine an incomplete office space in The Radiator in North Portland. The timber-frame building is the tallest such office building in Portland in decades.

Visitors examine an incomplete office space in The Radiator in North Portland. The timber-frame building is the tallest such office building in Portland in decades. 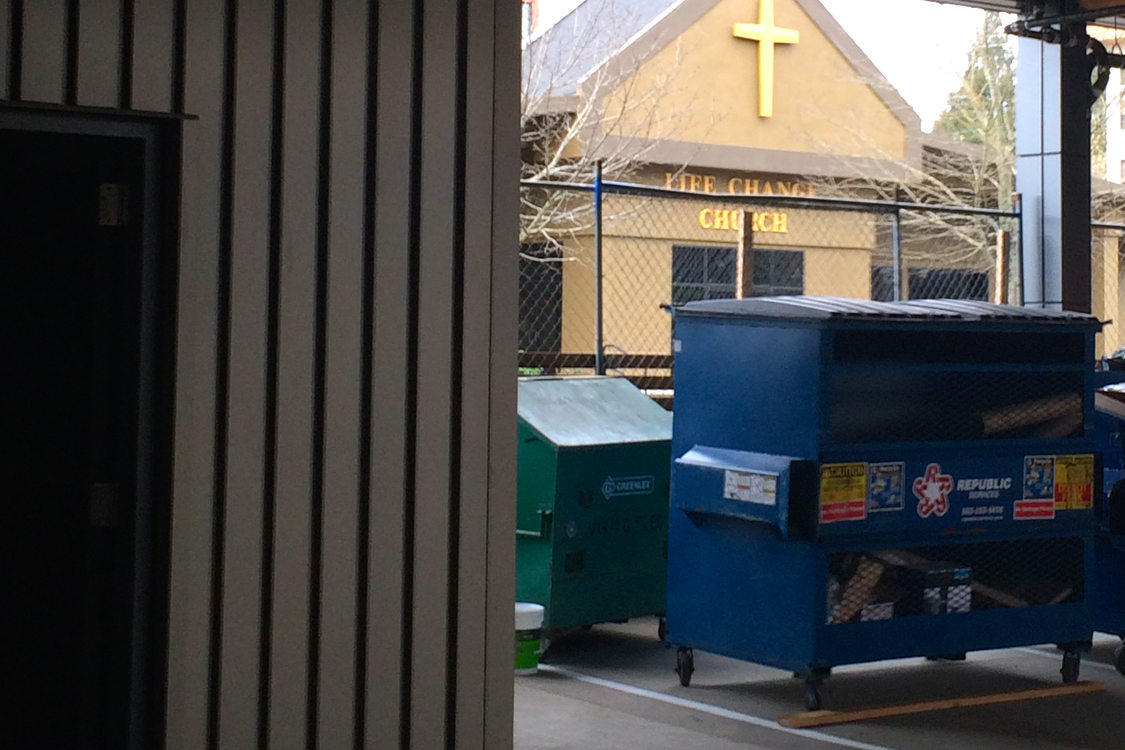 The Life Change Church, north of The Radiator, leases its parking spots to The Radiator on weekdays. Developer Ben Kaiser says he hopes that will help the church stay in the changing North Williams neighborhood.

The Life Change Church, north of The Radiator, leases its parking spots to The Radiator on weekdays. Developer Ben Kaiser says he hopes that will help the church stay in the changing North Williams neighborhood. 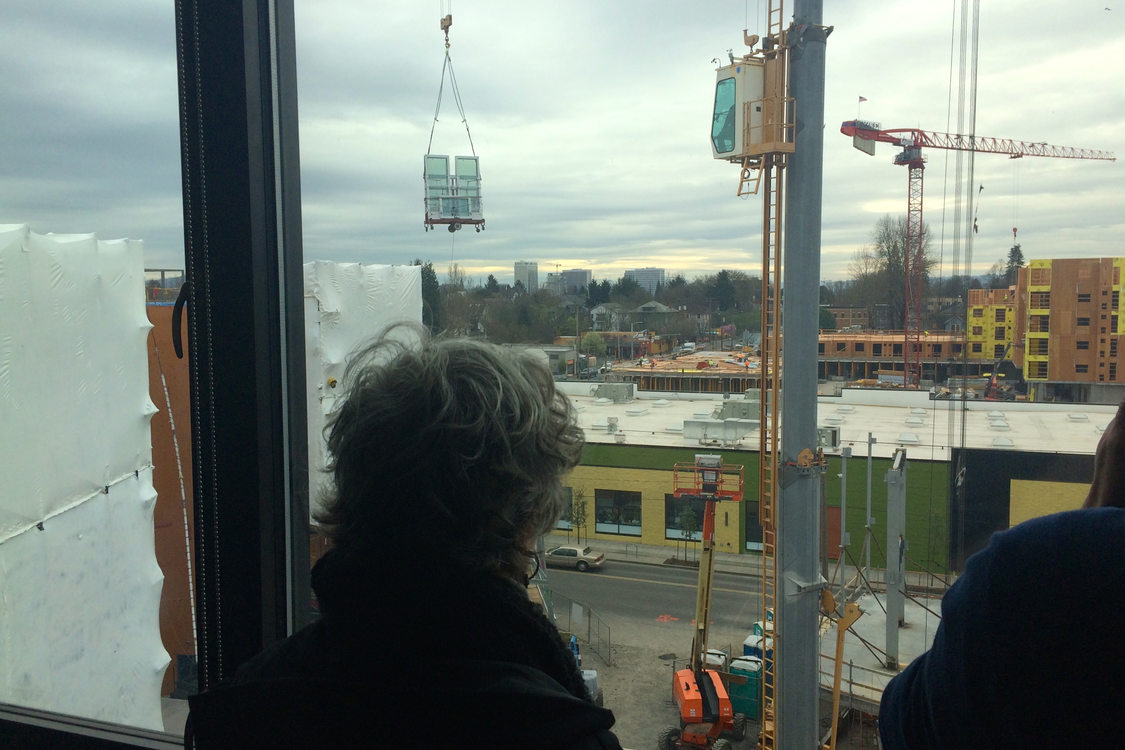 Metro Councilor Carlotta Collette watches as building material is hoisted at the construction site of the One North office complex on Portland's North Williams Avenue.

Metro Councilor Carlotta Collette watches as building material is hoisted at the construction site of the One North office complex on Portland's North Williams Avenue.

They soar overhead, coming from California, on their way eventually elsewhere, dozens visible in the skies above the Rose City. Two of them are here, at the One North mega-development, integrating into the urban environment.

Forget the blue heron. The construction crane is the real official bird of Portland.

Cranes aren't all visitors notice from the roof of The Radiator, a 36,000-square-foot office building that opens to tenants March 9. It's clear how denser development has radiated from the city center – into OHSU, Northwest Portland, and now to North Williams, where mid-rise buildings are dominating a landscape that once had a huge commercial bakery, small businesses and historic bungalows.

Most of those new buildings are mixed-use, with retail on the first floor and apartments above. But nobody's going to live at The Radiator, nor in the two buildings under construction next door. They combine to offer 100,000 square feet of office space in an area long forgotten by the office market.

The top two floors of the building are already leased by an outpatient clinic for children with eating disorders.

Metro's Transit Oriented Development Program contributed $300,000 toward construction of the $7.9 million Radiator building. Another $420,313 in Nature in Neighborhoods grant money built a public courtyard next to the building.

Metro Councilor Carlotta Collette, after a tour of The Radiator, said the project sets an example for how to integrate more jobs into a walkable neighborhood.

"A lot of times our 'walkable communities' get a bad rap, because people think it's all about lattes," Collette said. "This is a clinic in a community that people can walk to and use. I think it's a great project."

It's a timber-frame building, unusual for its height, but better for the economy in rural Oregon and for the environment. Instead of carbon-producing concrete and steel, the building's frame is carbon-sequestering timber. As long as the building stands, the CO2 in the wood is locked up with it.

On a tour of The Radiator with officials from Metro and other governments, Kaiser said he's keenly aware of how projects like his are changing a historic neighborhood. North Williams was once the epicenter of Portland's black community, and the signs of displacement are everywhere.

Megan Gibb, the manager of Metro's Transit Oriented Development Program, said the project was appealing for her program because it added offices in an area that is increasingly well-served by new housing.

"We're trying to balance out the land uses in that district," Gibb said. "There's a lot of housing being developed. By having employment, we're helping balance that. Providing jobs is another benefit."

A part of the community that's still standing is the Life Change Church, one of Portland's largest African-American congregations. Kaiser said he was worried the church might get a too-sweet offer from a developer and be forced to move.

So he worked on a 10-year lease with the church for its 35 parking spots. It provides income for the church, and helps combat the displacement that has so visibly changed North Williams.

Kaiser's company has played a role in some of that change. LV's Twelve-22, a bar and nightclub that was popular among North Williams' black residents, once sat where The Radiator is now.

Some of the blame, Kaiser said, goes to out-of-town developers who see Portland as a cheap place to build. It's still more affordable for new construction than Seattle, San Francisco or even Dallas.

But those developers don't understand Portland's character, he said.

"You could easily lose Portland," Kaiser said. "I don't know how you can hold on."

In the North Williams corridor, Kaiser said he's working with leaders from the black community to work on a nascent project to ensure redevelopment benefits longtime property owners, as well as historic community residents that have since been displaced.

Commercial lenders have also made it challenging to keep the building's form with the community's character. The building's first floor includes 10 parking spots on concrete pads, spots that Kaiser said he could have lived without.

"But banks said 'We won't fund it without parking,'" he said. "The most prime real estate in Portland is those 10 spots." He estimated each spot represented $50,000 in lost revenue, sitting as parking instead of being used for retail purposes.

"Portland does not have a parking problem," Kaiser said. "No one is moving here for ample parking."

Metro's TOD Program supports new construction in high-transit areas like North Williams to encourage development in those transit corridors. In 2014, it awarded $2.7 million toward TOD projects in the region.