It’s what garbage nerds call the “recovery rate,” the portion of all the waste collected that’s put to use rather than ending up in a landfill. And while that number is 10 percentage points higher than it was a 10 years ago, the 2014 calculation also marks the region’s first decline in nearly a decade.

The numbers were released this week in the Oregon Department of Environmental Quality's annual Material Recovery and Waste Generation Report. The report is based on the collection of materials as reported through surveys of garbage haulers and recycling and composting companies. Numbers are based on weight, and recovery rates include credits for operating state-certified waste prevention, reuse and residential composting programs. Portland-area numbers include Clackamas, Multnomah and Washington counties.

"People here care deeply about conserving our natural resources,” said Metro Council president Tom Hughes. “For a lot of folks, recycling has been a part of their daily practice – at home and at work – for 40 years. It's in our DNA."

Those decades of efforts add up. Compost feeds our farms and gardens. Energy powers homes and businesses. Recycling reduces the need for new raw materials to manufacture products we use every day, from paper bags to plastic sippy cups. These types of widespread reuse of resources save energy, reduce climate pollution, support local businesses and create jobs.

As in previous years, the Portland region’s recovery rate tops rates around the state, but the recent decline bucks a longstanding upward trend. While numbers need a deeper look, what’s immediately clear is that the drop is the result of dips in the recovery of three key materials: paper, wood and scrap metal.

Drops in paper recovery may be explained by decreases in magazine circulations and the distribution of junk mail, along with the decreased use of newsprint by the state's only daily newspaper, The Oregonian. In late 2013, the paper reduced delivery to four days a week, and in April 2014, the paper transitioned from a broadsheet to a compact format.

The decline in the collection of metals and wood waste is harder to understand – and seems counter-intuitive given the region’s rebounding economy and building boom. Whatever explains the drop in wood waste recovery in 2014, numbers for 2015 are expected to be even lower, since the WestRock paper mill in Newberg, which converted some 85 percent of the region’s wood waste into electricity, closed in late October. At this time, no other facility is readily available to receive and process the amount of wood waste that WestRock managed.

"Scrap metal and wood waste are associated primarily with the construction and industrial sectors," said Matt Korot, Metro Resource Conservation and Recovery program manager. "There's more analysis needed to understand the changes. We'll be working closely with DEQ to figure out why these rates went down."

DEQ is the state agency responsible for tracking garbage and recycling numbers. Metro manages the garbage and recycling system of the three-county Portland metropolitan area. The two agencies work together to adhere to state-legislated goals related to the management – and prevention – of waste.

Overall waste generation is also down

While the DEQ report shows a decline in recovery, another important metric, waste generation, continues on a downward trend – and that’s a good thing. Waste generation is the total amount of everything thrown away – garbage, recycling, etc. – regardless of category. The numbers for 2014 show a 3.36 percent decrease in the amount of waste generated per person. That rate has dropped five percent since 2009, and 23 percent since 2004.

In 2001, the Oregon Legislature established waste generation goals for the state. Among them was a focus on the amount of waste generated per person. From 2005 forward, there would be no increase. So far, the Portland area has succeeded in doing so.

Korot says recycling will always be a priority. “But an important focus is also making thoughtful decisions about what we purchase, which may allow us to cutt down on what we toss overall, whether it’s paper or food scraps or plastic, and whether it’s at home or at a business,” he said. “There are three Rs. And the first one is reduce.”

Making the most of our garbage is something Metro is focused on right now. Looking ahead to the expiration of Metro's contracts in 2019 with landfills and companies that truck most of the Portland area’s trash to a landfill 150 miles east of Portland, the region has an opportunity to look at where our garbage goes, what happens to it and whether we want to try new approaches to get more out of the stuff we don't want. 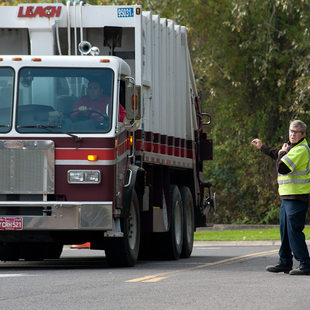