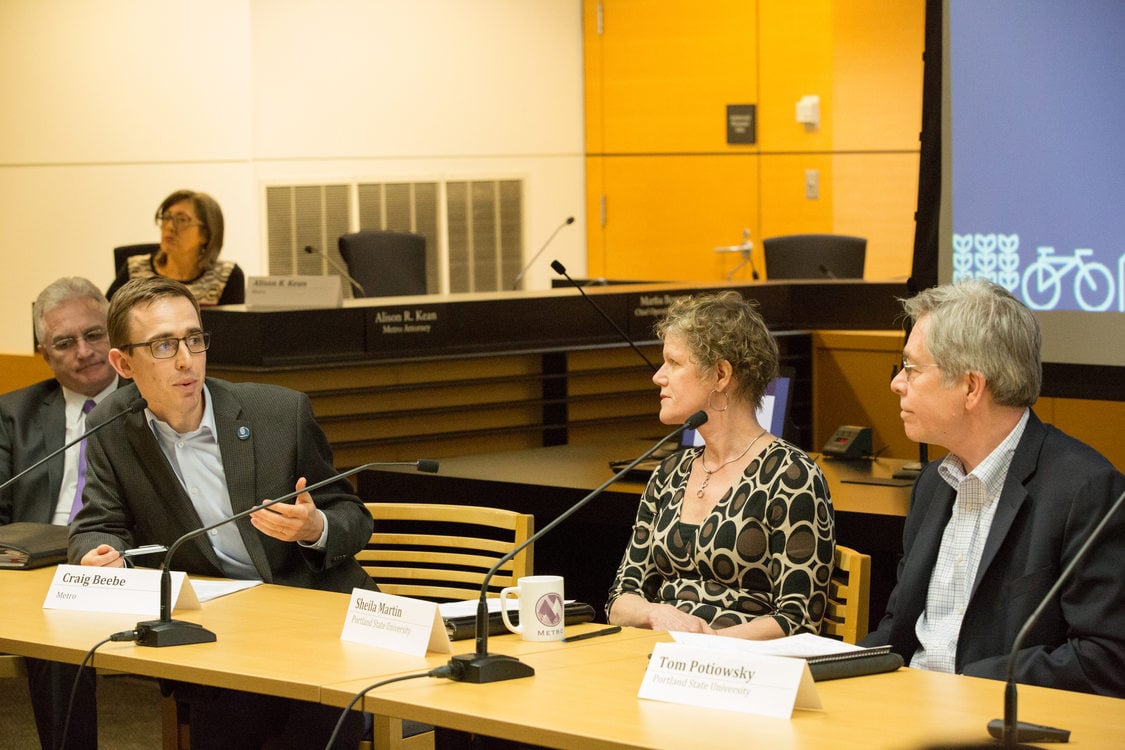 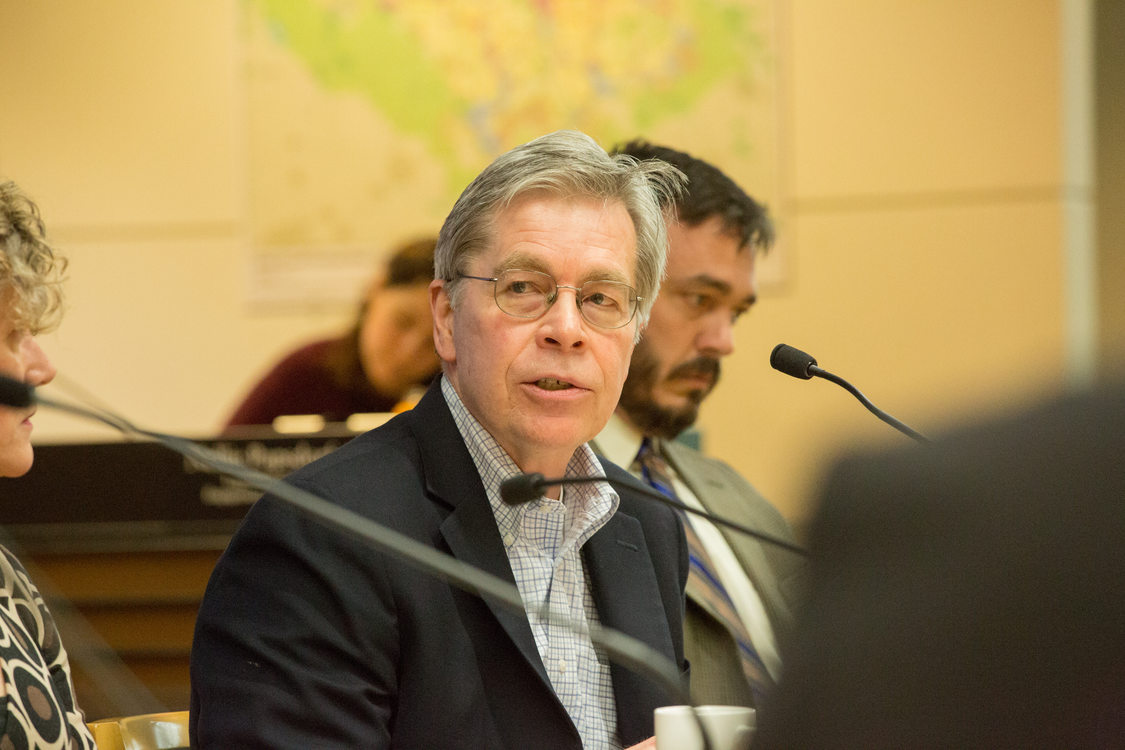 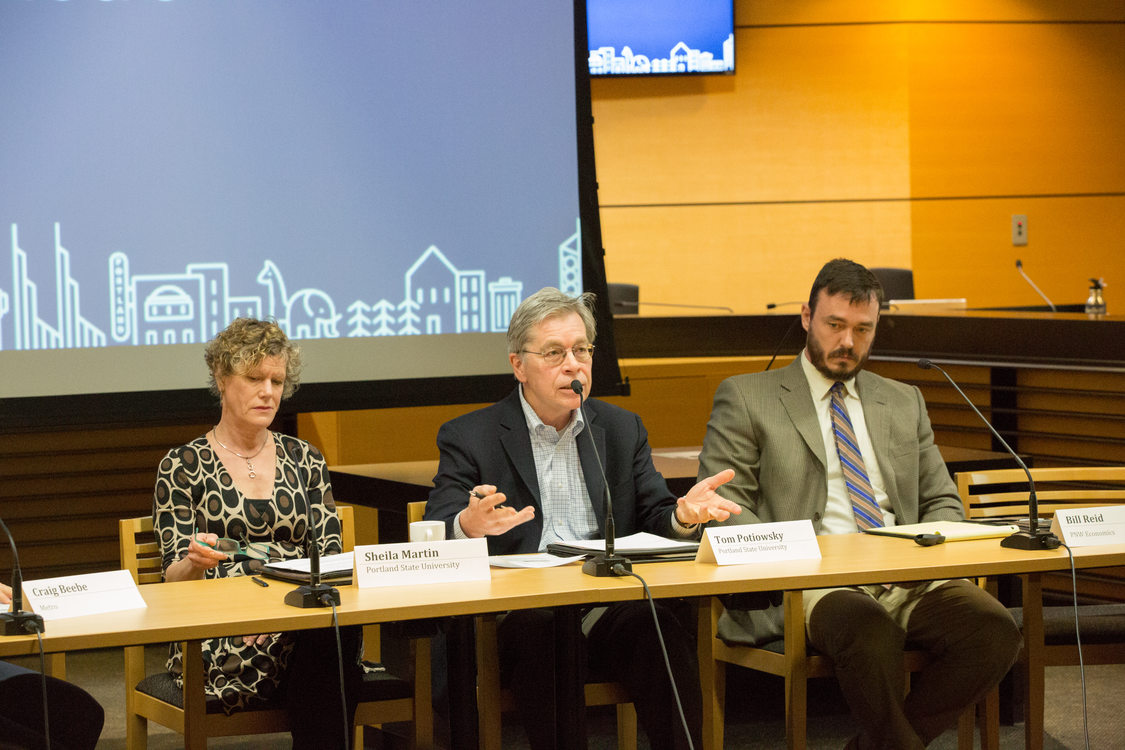 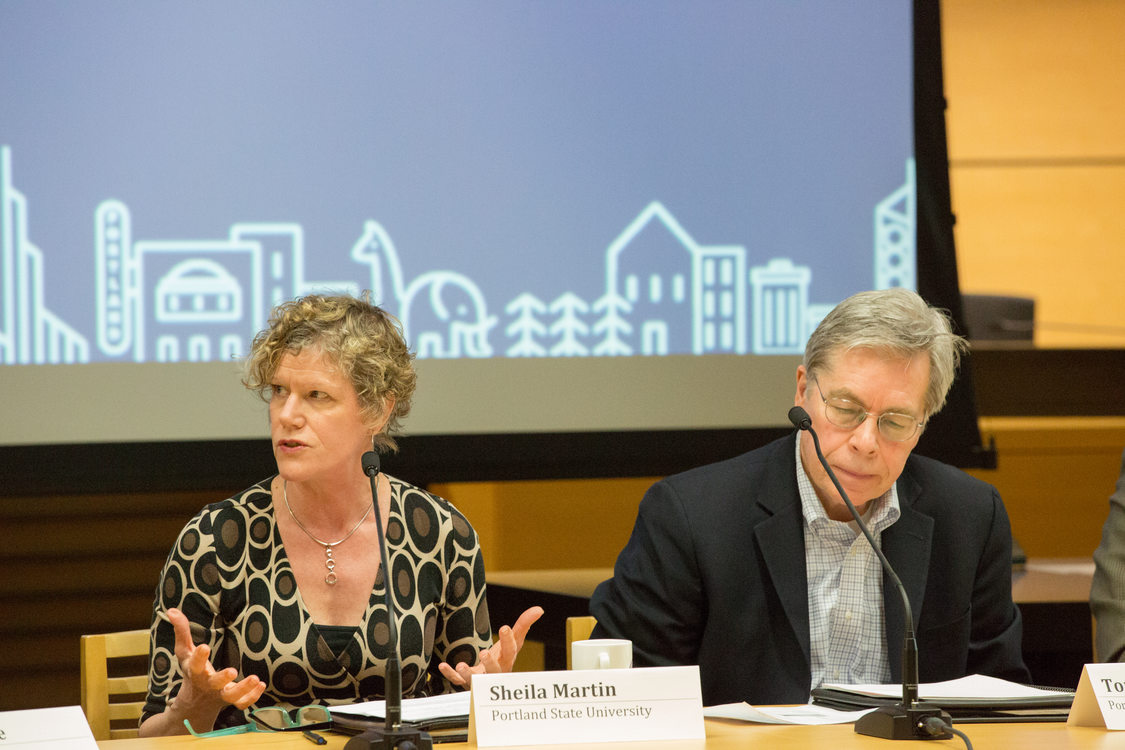 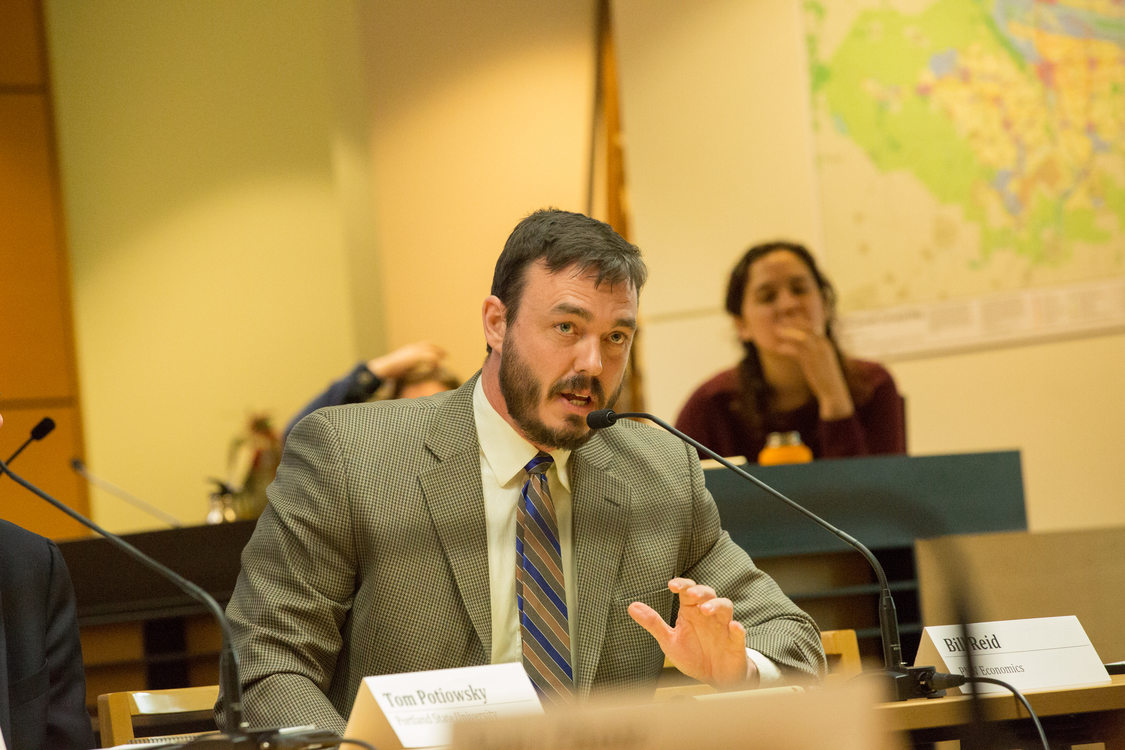 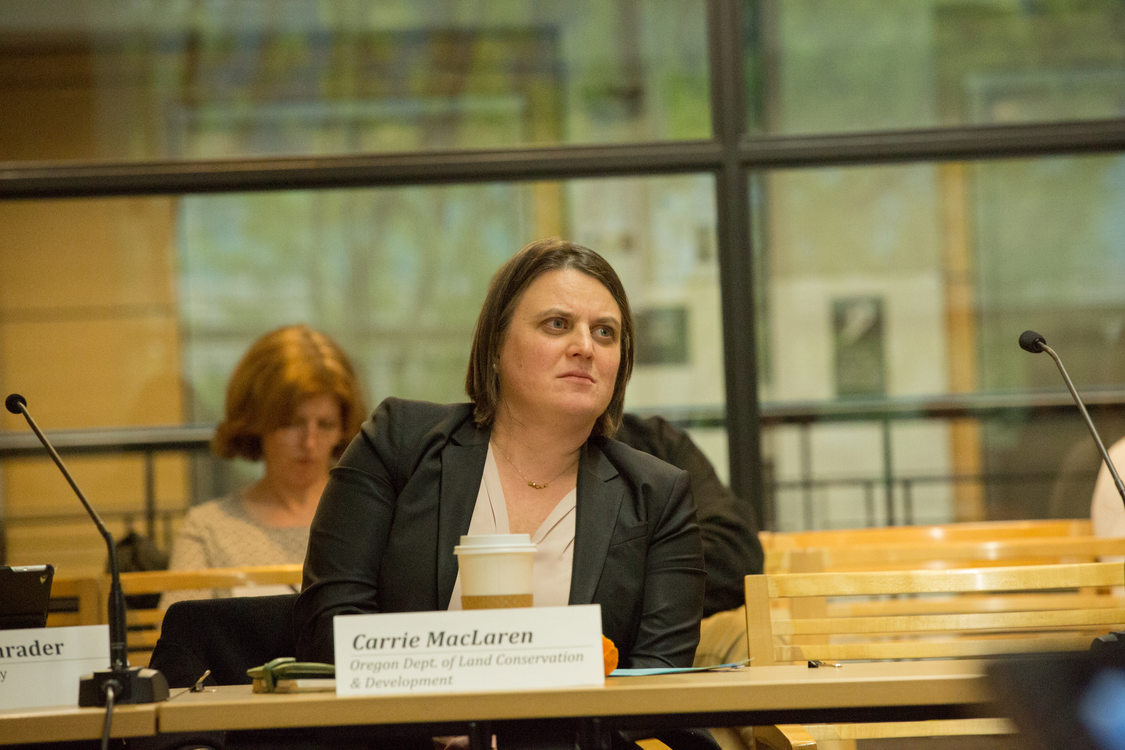 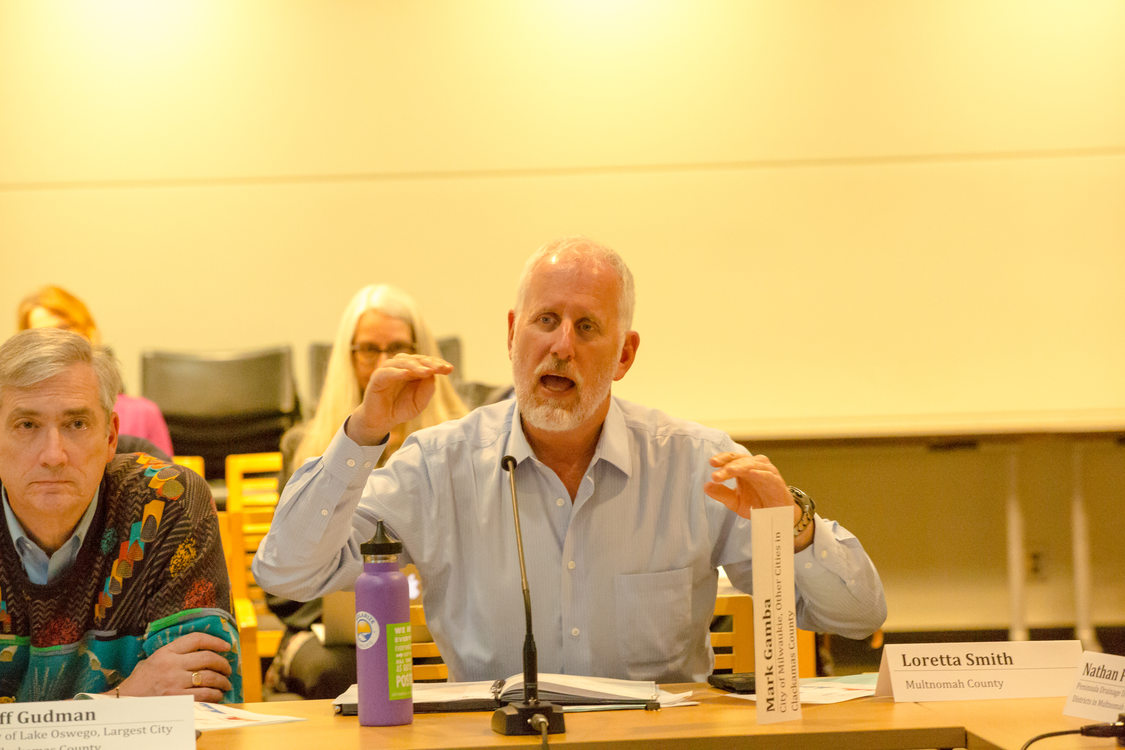 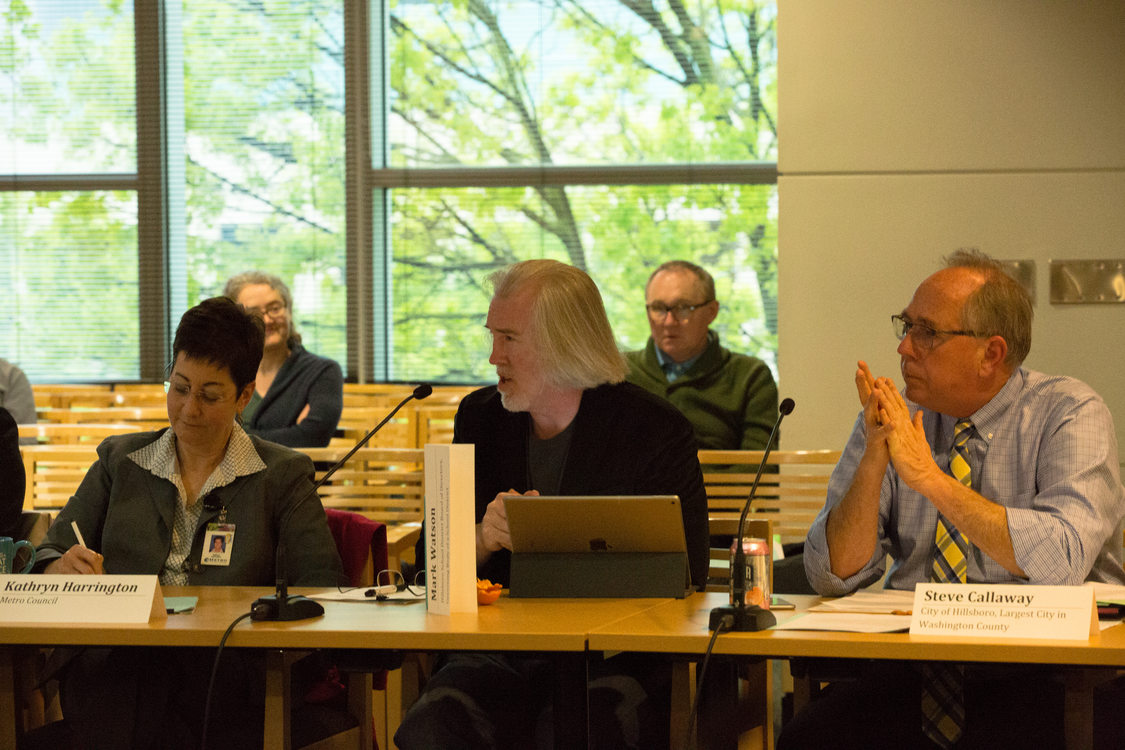 Mark Watson, a member of Hillsboro School District's board of directors, asks the panelists a question. He is flanked by Metro Councilor Kathryn Harrington and Hillsboro Mayor Steve Callaway. 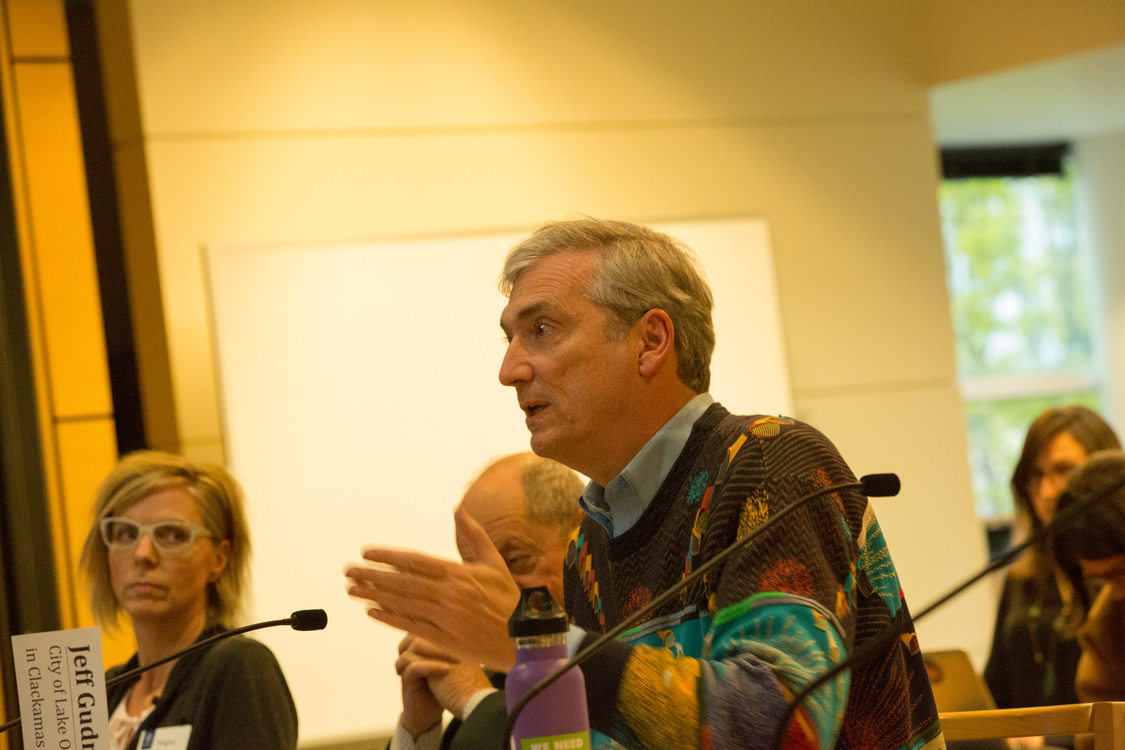 The Metro region has rebounded from the Great Recession — and going forward, both population and job growth are expected to continue at a moderated pace as the region approaches its full potential and full employment.

That's according to Metro's draft 2018-2038 Regional Growth Forecast, which the agency and its partners will use to inform the Metro Council's urban growth management decision.

On April 11, three experts discussed the trends behind the regional forecast during a meeting of the Metro Policy Advisory Committee, whose members represent cities, counties, special districts and the public.

Potiowsky said that among the lessons learned from the recession is that government needs to step in to replace what the private sector isn't able to do, including supporting job creation.

"We had a lot of people lose their jobs as businesses changed their technology, occupations became less useful and these people then need to be retrained," he said. "That's where government can step in and provide help to get people back into the labor force and be able to be employed."

Martin suggested that more could have been done to invest in the infrastructure that was needed to meet the post-recession demand for new housing as newcomers arrived and millennials moved out of their parents' homes into places of their own.

Even as job and population growth have returned to pre-recession rates in recent years, the panel said the region faces uncertainties — everything from land availability to the risk of a trade war between the U.S. and China and the impact of changing technologies, among other issues.

Reid said a lack of industrial land with the required public services, like pipes and roads, could hinder employment growth in greater Portland.

"The biggest risk moving forward is the continued inability for cities and counties to meet the need for infrastructure from an upfront cost and financing perspective," he said. "It's holding cities back and getting places where employers can move to and build and employ people — that physical constraint is a gigantic risk for the employment forecast of this region moving forward."

Martin said an unknown is how major industries changing their business models will have an impact on the need for land. She used healthcare as an example, saying that there aren't enough hospitals to deal with the healthcare needs of an aging population.

"It seems to me that what's on the horizon for the healthcare industry is a change in their service model that requires less space," she said. "Maybe we can find a way to deliver healthcare services to people without having to build a huge number of new hospitals."

The Portland area's unemployment rate fell below four percent in December. Businesses will find it harder to fill vacancies in a tight labor market, but Martin said it's an opportunity for employers to consider people they previously would not have.

There's an exodus of baby boomers retiring from the workforce, but with the coinciding increase of minorities, Martin said it's essential that employers be more inclusive in their hiring practices.

"The labor market is so tight that employers are beginning to reach into labor pools they might not have considered in the past," she said. "But they also have to be willing to invest in training to ensure that those people are productive and have a good experience with those employers in order to increase the tenure of a given worker at a given employment situation."

But Potiowsky cautioned that as the region's labor market nears full employment — the point at which nearly everyone who wants a job has one — it's also experiencing a slowdown in job growth.

"What we have to be careful about is whether the slowdown is the consequence of full employment or is it the consequence of it's becoming too expensive of a place to live," he said. "With the expansion of the economy overall in the U.S., are other metro areas that have more affordable housing and still have job growth, are they looking better? So we have to dig down into the reasons."

Competition between millennials and boomers

Martin said it's important that the region builds housing at different price points and styles. This followed an update earlier in the meeting on Metro's plans to place an affordable housing bond measure on the November ballot.

"It's really important that we continue to invest in building quality spaces that make denser living easier to take because continued population growth means that if we're going to protect our farms and forests the way we've committed to doing, we need to densify and that can affect our quality of life," she said.

She added that investments need to be made in central cities so that they continue to be desirable and safe places to live.

Reid said that as millennials begin buying their first homes, there's going to be increasing competition between them and baby boomers who also want to live in walkable, urban neighborhoods as they get older.

"Now it's a matter of delivering them housing that's affordable to them in those areas," he said.

Potiowsky said millennials are having to look to the suburbs once they realize they can't afford to live in Portland proper — which is putting pressure on suburbs to become more urbanized.

"That means all types of issues — transportation, the UGB, density — but if the aspect is too expensive, there's going to be demand out."

The regional forecast will be part of the 2018 Urban Growth Report, which is expected to be released in late June.