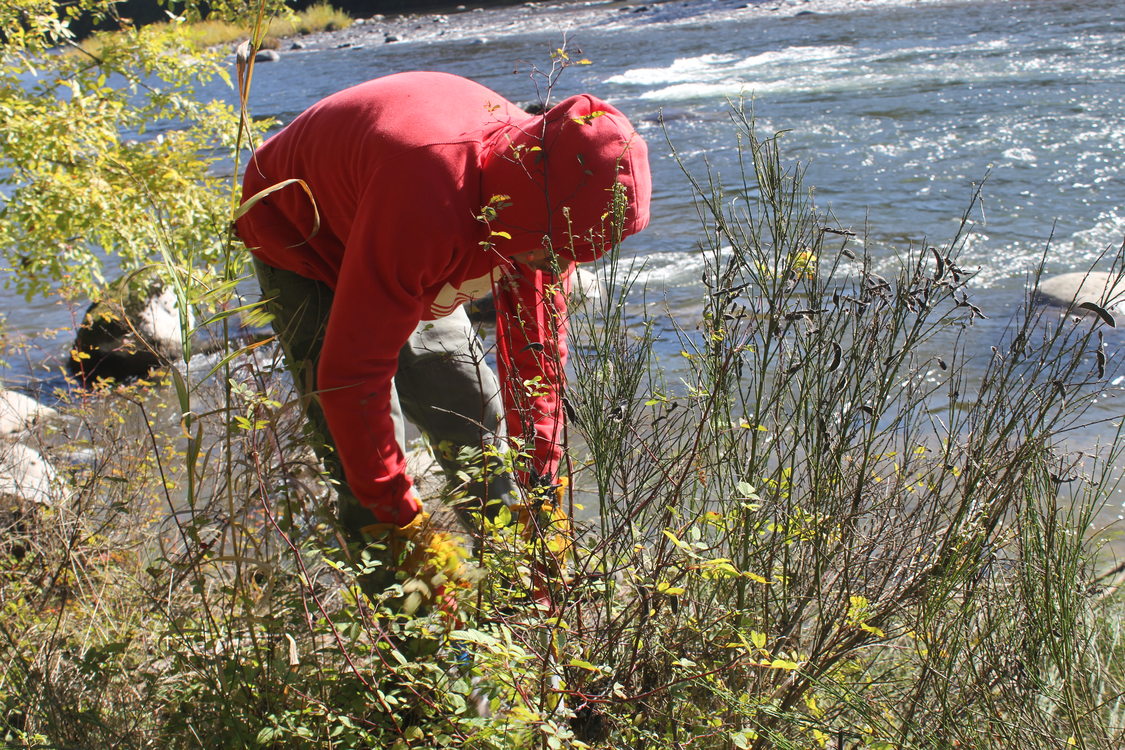 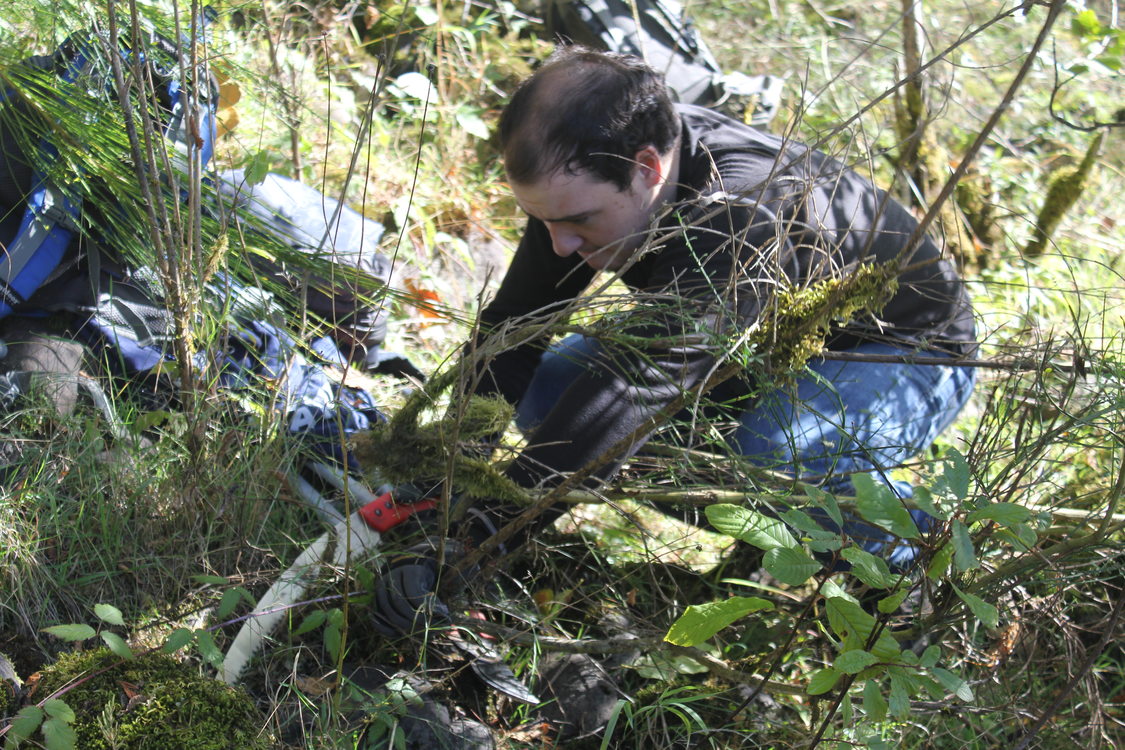 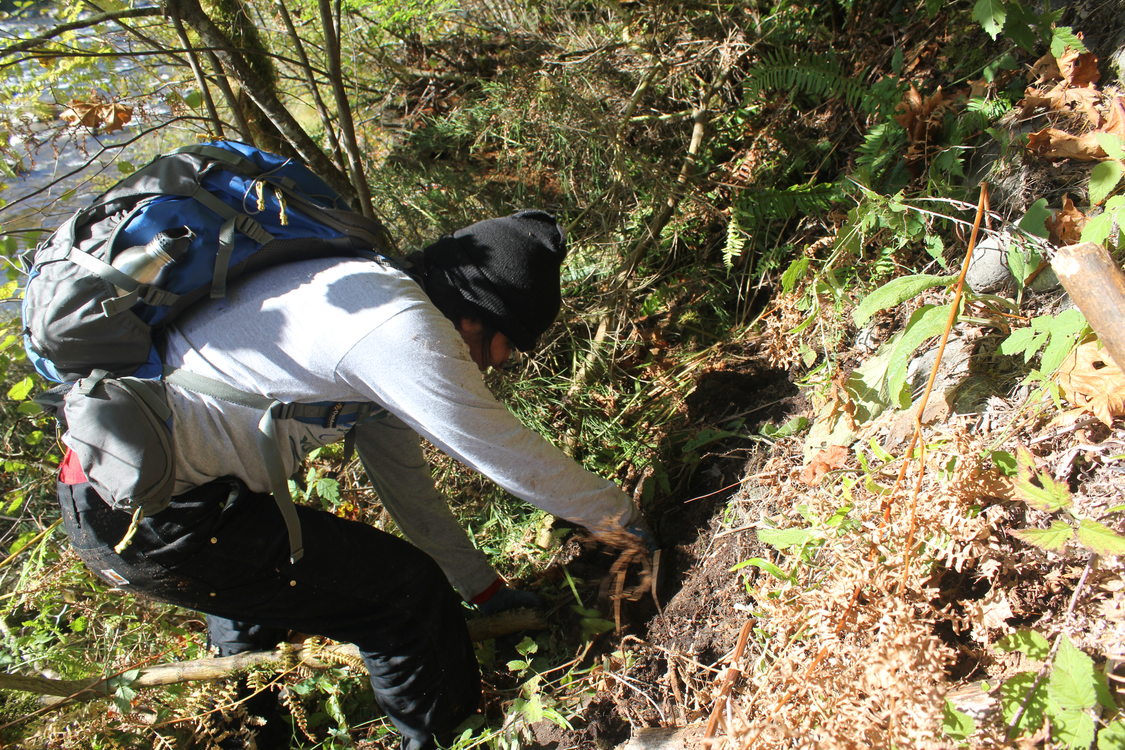 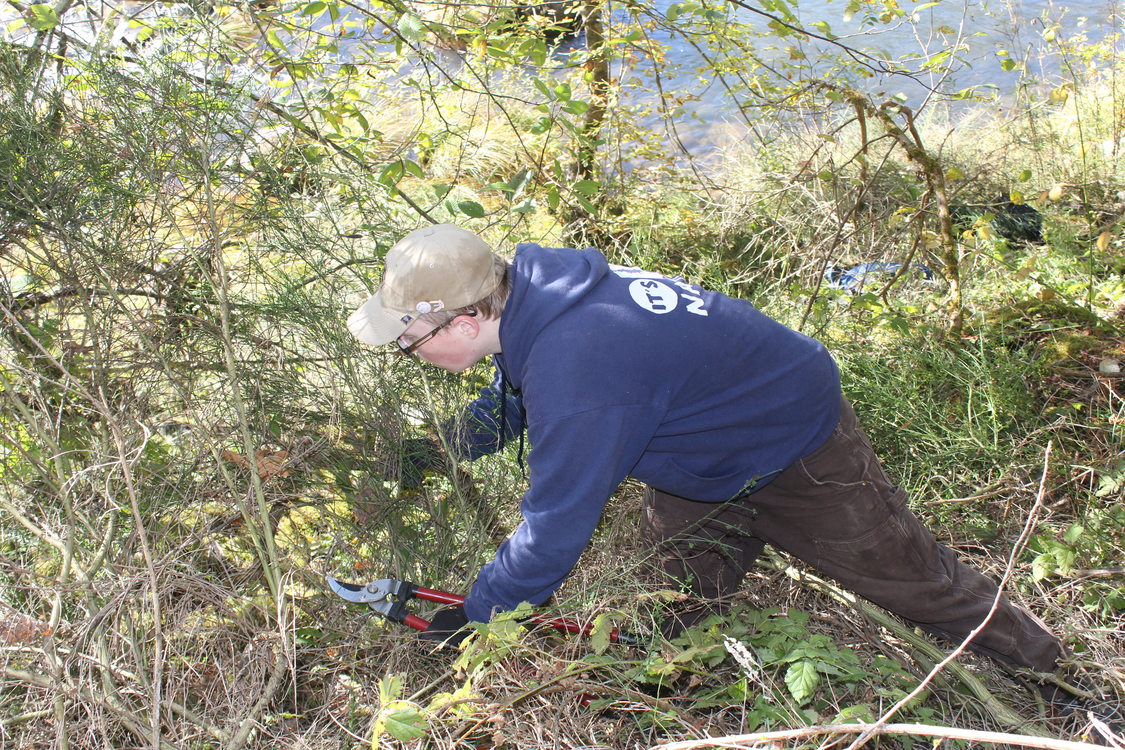 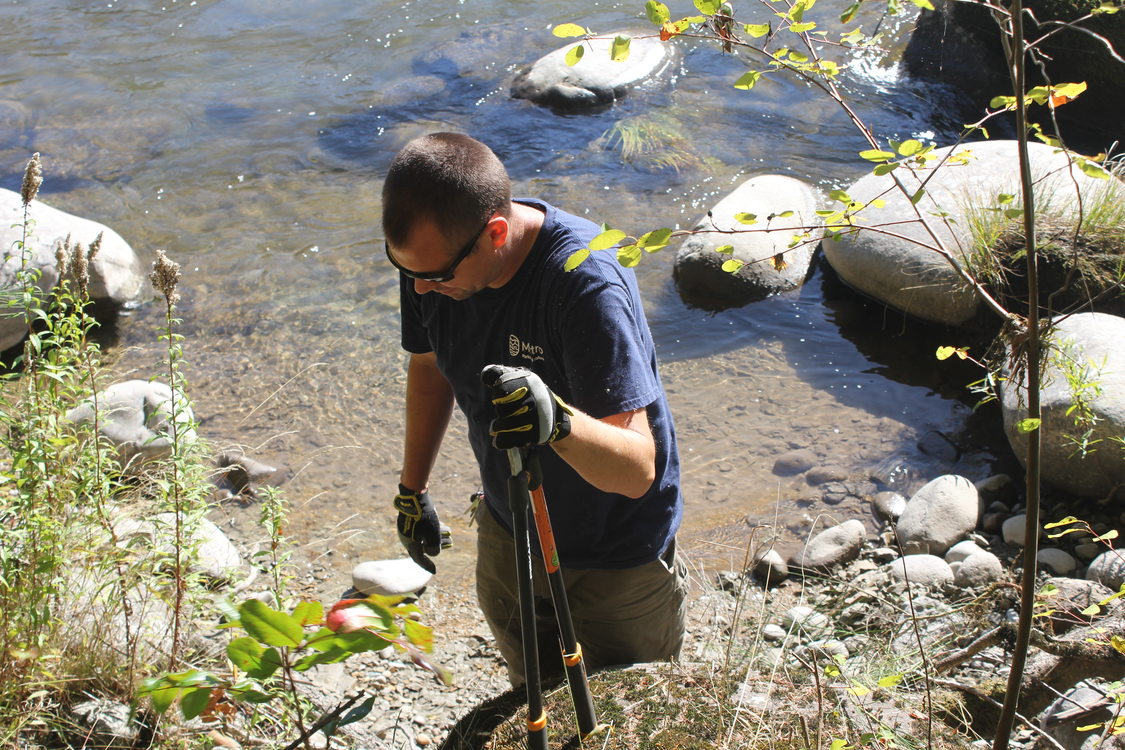 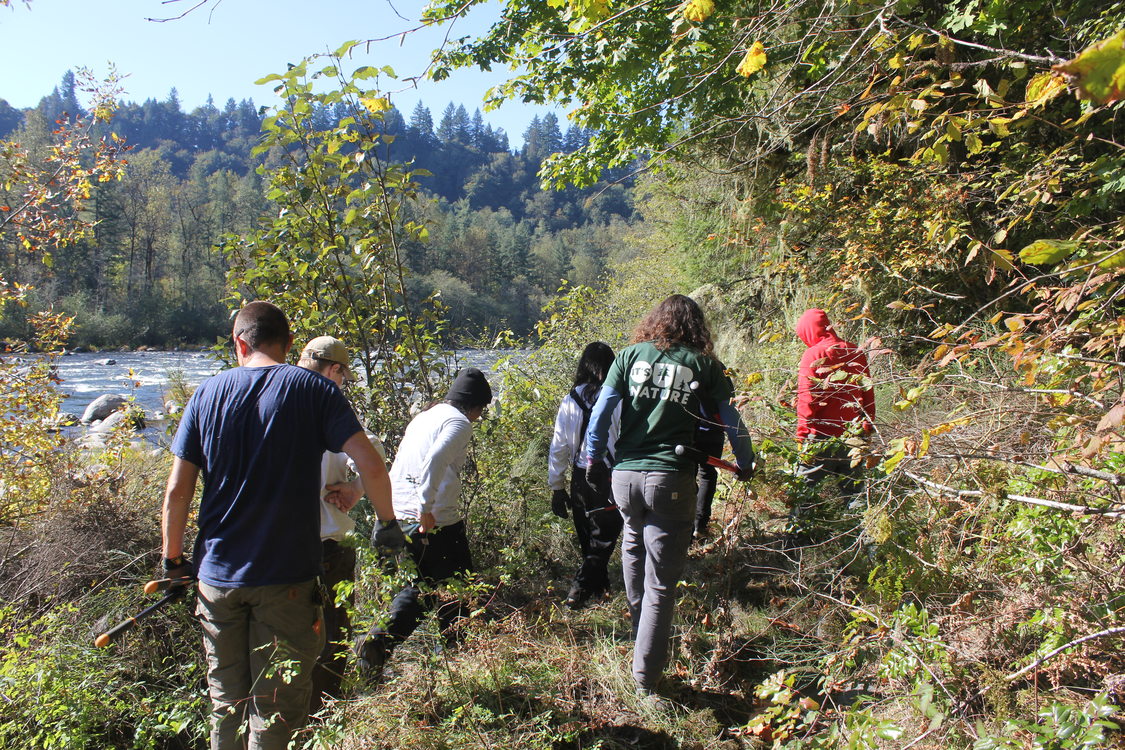 The Youth Ecology Corps crew begins its 2.5-mile hike back to their van.

The Youth Ecology Corps crew begins its 2.5-mile hike back to their van. 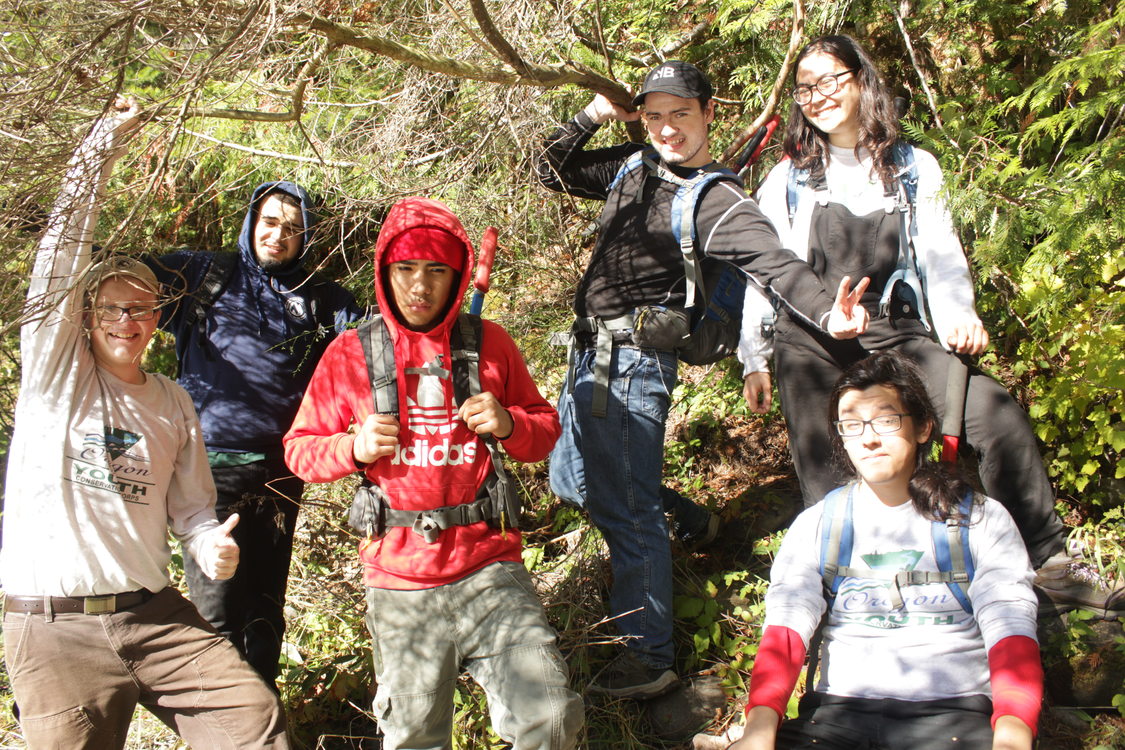 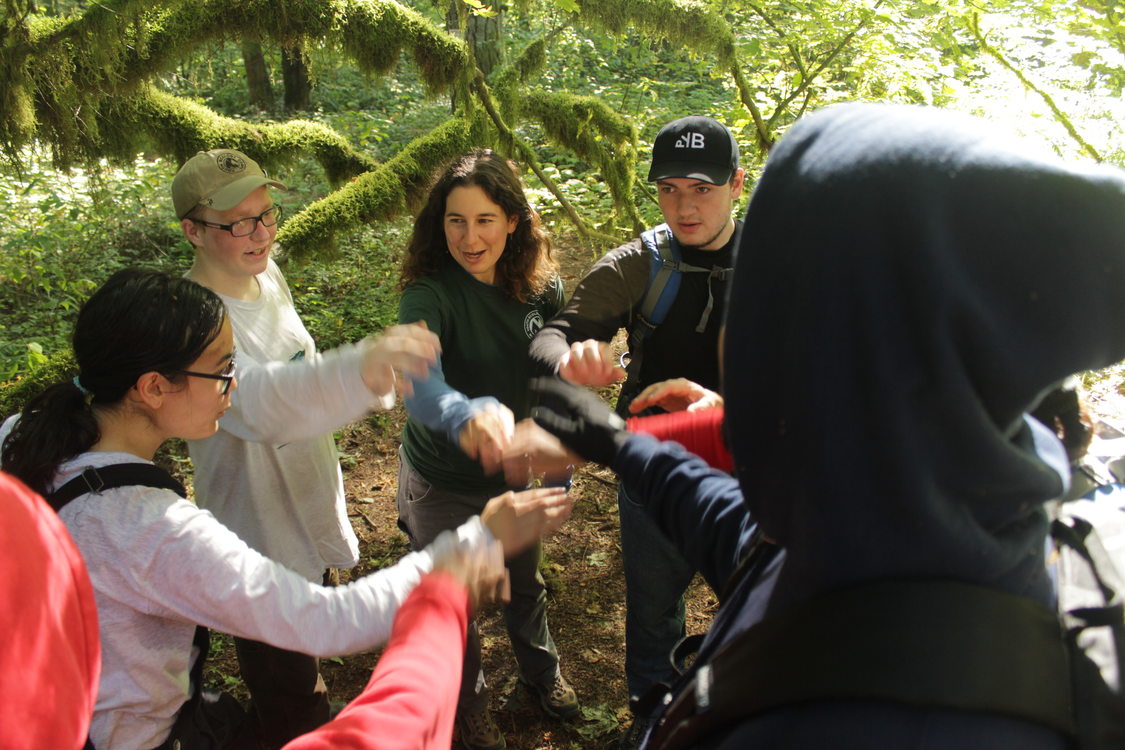 The Youth Ecology Corps crew do a cheer at the end of their work day.

The Youth Ecology Corps crew do a cheer at the end of their work day.

On a recent fall morning, a crew of six teenagers made their way along the banks of the Sandy River, using hand saws and loppers to cut away at invasive Scotch broom plants.

They are part of the Youth Ecology Corps, a program run by Metro and Project Youth Employability Support Services that gives low-income youths ages 16 to 24 a chance to learn new skills and perhaps pursue careers in nature conservation.

With the sun beating down, the crew took a divide-and-conquer approach, working as quickly as possible to rid the new Metro natural area of the pesky weed.

It was their fourth day tackling the task and they hoped to finish before having to call it quits. A few hours later, their mission was complete and they headed back to their van – a 2.5-mile hike up a steep trail.

For now, their work there is done, but it won't be the last time a crew returns to the site. Chris Hagel, a lead natural resource specialist on Metro's land management team, says it'll likely become an annual trip.

"We can never walk away from that," he said. "If we did walk away, the invasives would take over."

Metro’s land management team works behind the scenes to restore and maintain 17,000 acres of parks, trails and natural areas, doing work like this.

After a property is acquired with money from the 2006 natural areas bond measure, a five-year stabilization period allows crews to start basic restoration work. During that time, weed-choked areas start getting treated and replaced with native trees and shrubs, dilapidated buildings and other manmade structures are removed, and existing roads are maintained or decommissioned. Once a property is stabilized, it transitions into maintenance mode, with periodic work by the land management and science teams.

A variety of critical work

Getting rid of invasive weeds like Scotch broom is one the main tasks of the land management team. Once planted to control erosion, stabilize dunes and as an ornamental plant along highways, Scotch broom is now one of the state's most noxious weeds.

Invasive plants can create significant damage to habitat. They can reduce water quality and overtake native plants that provide food and shelter to wildlife.

Here are three common invasive plants seen in the region, with descriptions from the Oregon Department of Agriculture.

It is the most widespread and economically disruptive of all the noxious weeds in western Oregon. It aggressively displaces native plant species, dominates most riparian habitats and poses a significant economic impact on right-of-way maintenance, agriculture, park and forest production.

Scotch broom is a pioneer species known to displace native plants and smother tree transplants, increasing tree death or slowing growth in the early years. It readily invades disturbed sites, natural areas, dunes and forestlands. Broom control costs on right-of-ways, public facilities, parkland and private property are in the millions of dollars each year due to its rapid growth and persistent nature.

"It takes a few years, but without management, all of our open areas would just be blackberry and Scotch broom for the most part," Hagel said.

It thrives in disturbed soil like riverbanks and quickly displaces native plants, Hagel said. The seeds can sprout into plants 80 years later, and the plants can grow as tall as 12 feet.

The Nature Conservancy, which donated the property to Metro in the summer as part of a 249-acre package, has had volunteers remove Scotch broom along the river for years. Metro is simply picking up where they left off, Hagel said.

"We'll have a lot of stuff coming back up, but one thing we've found is that if we continue to hand-pull them over and over again, we tend to have less over time," he said. " We're actively managing the site, we're going to do so in the future, and we're going to do a good job."

Metro’s land management work also relies on money from the 2013 parks and natural areas levy. More than 40 percent of the money from the levy goes toward restoration and maintenance projects led by the land management and science teams. The current levy runs through June 2018, but voters last year overwhelmingly approved an extension through 2023.

The scale of work to restore and maintain more than 17,000 acres is enormous.

"There are properties within our portfolio that we haven't even touched in the five years of our levy," said Justin Takkunen, Metro’s natural areas land manager. "Some people think we should have enough money to touch every single one of the properties every year from now until forever, but we did not get that big of a chunk of the levy."

The team's responsibilities range from addressing encroachment issues with neighbors to installing signs, gates and fences. But removing acres of invasive species and planting native plants make up the bulk of their work, with regular follow-up visits required to prevent re-sprouting.

Seasonal crews and contractors use chainsaws and other tools to cut down large swaths, plant native plants and spray herbicides to kill competing vegetation.

Additional help from the Youth Ecology Corps crews have allowed them to work in areas that otherwise might have been left untouched, Hagel said.

"The contractor isn't necessarily going to be willing to walk all the way down here to cut a little bit of Scotch broom, because they just can't make any money on it," he said. "So it's important because it makes these small projects really feasible to accomplish with this crew. Without them, I don’t know if we could even get here."

It will continue to be a challenge to complete restoration work in the months ahead. Come July, the land management team will be reduced from 10 positions to eight, part of a move to hire additional park rangers.

The reduction is compounded by the shutdown of the Youth Ecology Corps program, which runs through the end of 2017. The program is a partnership between Metro and Mt. Hood Community College's Project Youth Employability Support Services, which recently lost its federal funding and is shutting down after 35 years.

Part of what made Youth Ecology Corps so successful is that it introduced young people to the outdoors and helped them develop good work skills they could use to find jobs, Hagel said.

Some of the Youth Ecology Corps’ other projects have included installing cedar split-rail fencing, closing down unauthorized trails, planting bare-root plants, putting willow stakes in the ground and retreading trails. They have also taken field trips and worked with Metro naturalist Dan Daly to lead programs for preschool- and elementary school-aged children to experience an ancient forest and salmon ecology. The program has provided direction to participants, said Stasia Honnold, the crew leader.

"Maybe they finished high school, but mostly they haven't and don't really know what they're doing with themselves,” she said. “They don't necessarily have to go into natural resources after this, but it gives them productive work to do and the confidence that they're capable of amazing things."

Each corps season lasted about nine weeks, but participants often stayed on for multiple seasons. They earned $11.25 an hour. Nine participants have moved on to seasonal positions and internships at Parks and Nature.

Since the program started in 2014, approximately 50 participants have collectively worked more than 16,500 hours at Metro parks and natural areas.

Several participants said they were drawn to the program for the chance to work outdoors and to make a difference as they decide what to do next and to improve their chances of landing jobs in the field.

Tanner Grimes, 18, said he's enjoyed removing invasive species the most and wants to continue working in nature, something he says would never have crossed his mind five years ago when he preferred staying indoors.

Both he and Trevor Thomas, 21, hope to turn their experience on the crew into a career with Metro.

"Youth really need to get into this kind of work," Thomas said during the return hike. "There's only ever going to be a demand for people to help keep the environment intact, because without going out and doing the work, none of this would be here."