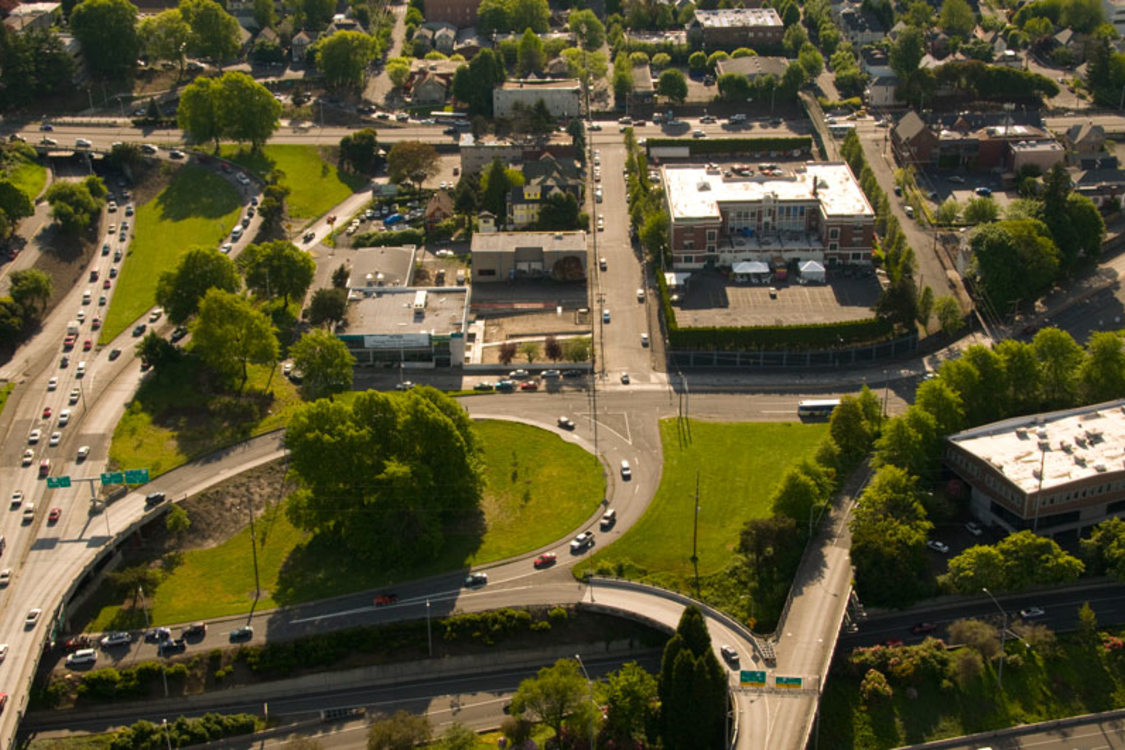 To students and employees, South Portland's National College of Natural Medicine campus is like an island amid a sea of pavement. As the college plans significant growth on its 5-acre campus, it's seeking opportunities to improve connections with its neighborhood and the greater region. 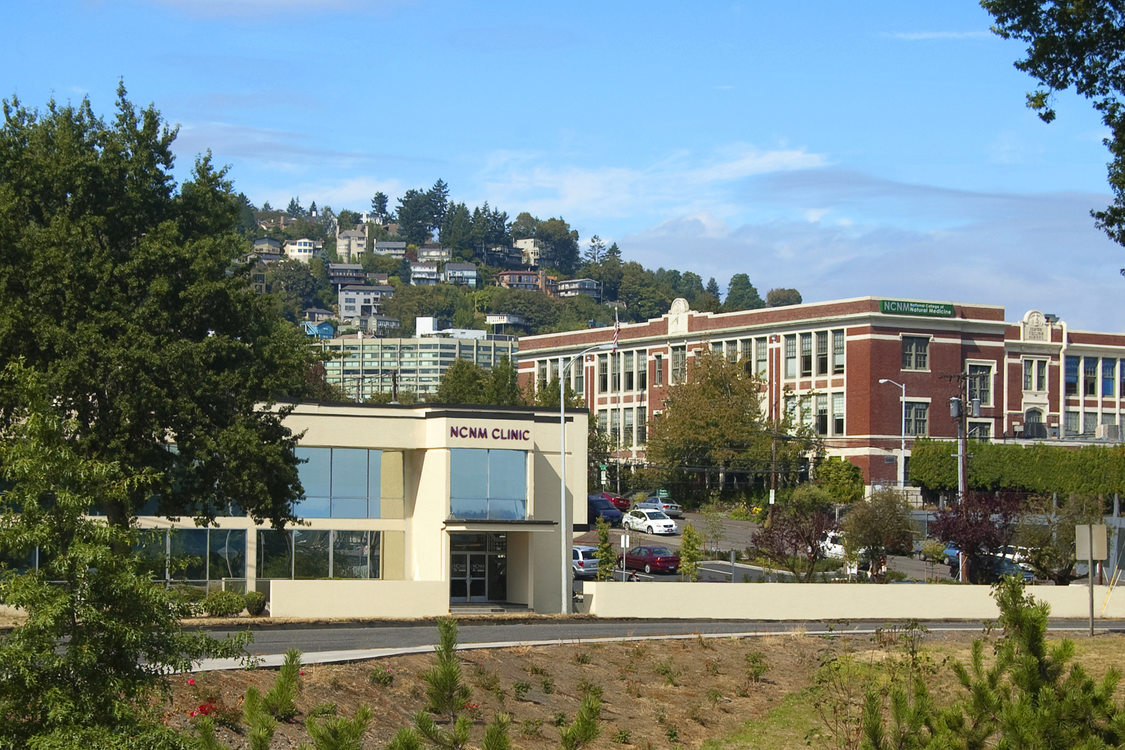 Founded in 1956, the college moved to its current campus in 1996, initially occupying just the historic Josiah Failing School (right). Since then, it's acquired several neighboring buildings, including a clinic that sees 20,000 patients annually.

Hospitals and clinics perch atop Marquam Hill above South Portland. Providing better transit access for the 20,000 people who climb the hill each day is a key goal of the Southwest Corridor project -- but how to do it? Photo courtesy NCNM.

The college's triangular campus is walled off from surrounding neighborhoods by several high-traffic roadways, including SW Naito Parkway (center), SW Kelly Avenue (foreground) and numerous ramps at the Ross Island Bridgehead (left).Tens of thousands of cars and scores of buses pass by daily, but accessing the campus is confusing. 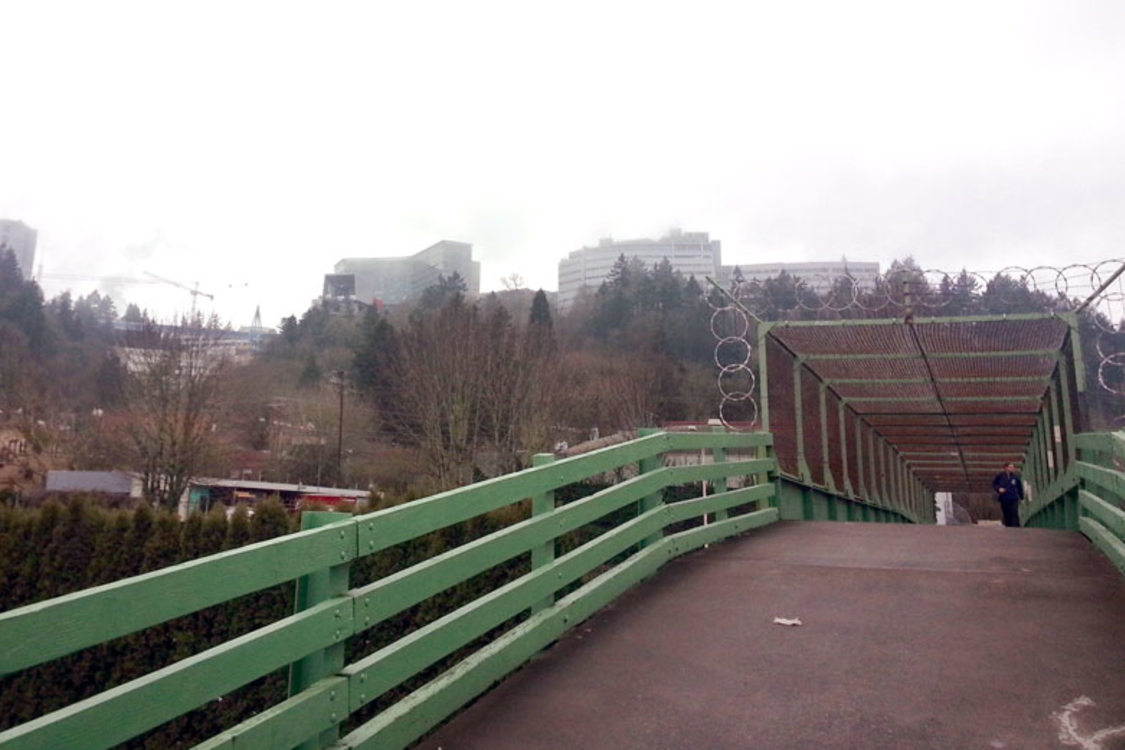 NCNM's only pedestrian connection to the South Portland neighborhood is via this old pedestrian bridge above Naito Parkway. Ringed with barbed wire, the bridge is accessed via steep, outdated ramps. Campus leaders hope to replace the bridge one day with at-grade connections across a remade Naito Parkway, possibly including a new high capacity transit line from the Southwest Corridor Plan.

Ask nearly anyone at Southwest Portland's National College of Natural Medicine about their campus, and it won't be long before you hear the word "island."

"Everyone says, 'I can see it but I don't know to get there,'" said Laurie McGrath, who has worked at the college for nearly three decades.

As NCNM plans for new growth, it wants to be a place that's easier and safer to access. But it also wants to remain in its South Portland home.

For all these reasons and more, the college's leadership is paying close attention to the Southwest Corridor Plan – which could bring NCNM's "island" back to the mainland.

A place to grow

Founded in 1956, NCNM has grown into the nation's most prominent college for naturopathic medicine and research, with more than 600 students and 250 staff and faculty on a roughly five-acre campus.

It might seem unlikely for a college devoted to natural healing to be in such a constrained urban location surrounded by so many lanes of busy traffic. But the college's president, David Schleich, sees it differently.

Even Schleich got lost trying to get to his first day at work in 2007. But he quickly recognized the opportunity inherent in a location just south of downtown Portland, close to OHSU and Portland State University.

"What an amazing place to grow!" he exclaimed in a recent interview in the college's administration building.

The view from the building is a chronicle of the college's growth. It looks out over several buildings and properties NCNM has added since moving here in 1996, including a historic elementary school, several academic and administrative buildings and a clinic that sees 20,000 patients annually.

Schleich looks at the campus and envisions yet more change. In particular, he envisions more greenspaces, perhaps created through vacating dead-end streets and burying parking lots. He sees the potential for a residence hall, more classroom buildings and a market that could serve the community with natural foods.

But he also recognizes the need to pair these on-campus changes with improvements that make it safer and easier to get to campus, including by means other than driving.

"With some changes, you could really change the future in this corner of Portland for the better," Schleich said.

High on the college's agenda: Naito Parkway, which pens the campus in on its west. Nearly 10,000 cars stream by daily. An old pedestrian bridge, ringed with barbed wire and accessed via steep ramps, provides the only safe link to the Lair Hill neighborhood and to a bus stop serving several bus lines.

In its 20-year master plan, adopted in 2012, NCNM envisions a remade Naito, with fewer auto lanes, new crosswalks and stoplights that allow for easier traffic flow and enable people to cross safely to the neighborhood beyond.

Students and staff like the idea. "If we had a light somewhere instead of going up and over that bridge we'd have better access to Lair Hill," McGrath said. The idea also has support among neighbors.

The college has another vision, too: high capacity transit on Naito, which could directly support its visions of better connections to the neighborhood as well as the broader region.

Three high capacity transit alignment options are currently under consideration for the area. A Naito alignment would likely bring about the impetus and funding to fully remake the busy street. A Barbur alignment might provide some access and safety improvements on Naito, but likely not to the same degree. And a tunnel under Marquam Hill would not contribute directly to improvements on Naito, so changing the road would depend on other funding sources and timelines.

Transit is important to many NCNM students and staff. Most commute from Northeast and Southeast Portland, many on three lines that cross the Ross Island Bridge from Southeast Portland. The opening of the Tilikum Crossing in September will reroute two of these lines, the 9-Powell and 17-Holgate, further away from campus – a sore point with many students and employees. However, the college successfully worked with TriMet to improve service on the 19-Woodstock.

The college will also still be directly served by several buses on Naito and nearby SW First Avenue, just over the pedestrian bridge. One of the buses that stops there is the southbound 12-Barbur, providing a link to Southwest Portland and downtown Tigard.

But some students and employees find the current service provided by the 12 hard to fit with their commutes and personal lives.

Spring Kennedy, a student in her fourth year at NCNM, commutes from Tigard. After trying the bus for her first couple of years, she said, she found the schedule too hard to align with her classes and family schedule. "I couldn't just go," she said. "It depended on when the bus was here, and I'd have to walk to the stop. That timing was difficult to count on."

Kennedy drives today, but timing is still unreliable: because of bad traffic, she regularly adds 15 minutes to a drive that can take as little as 20 on a good day. A direct high capacity transit line would be "an excellent option" for her, she said. "It'd be a lot more straightforward. It'd take you straight to school or close to school."

Bob Jackson, who works in NCNM's accounts payable department and commutes from Tigard's Progress Ridge neighborhood, agreed with Kennedy's assessment. He drives when he can get in early to avoid rush-hour traffic. Otherwise, he prefers the bus, which is at least as slow but less stressful, he said.

A direct high capacity transit line would change his thinking about his commute. "I would highly consider using that, if there's a direct line to right where I work," he said.

Part of the mission

Getting students, employees and patients to campus without needing to drive is crucial to the college's growth plans, Schleich said. But it's also a reflection of the principles that guide its approach to medicine.

Naturopathic medicine incorporates disease prevention as a core part of its approach to health, Schleich said, counting off the many chronic health problems Americans face that are influenced by environment, such as diabetes, obesity and chronic stress.

Participating in creating a healthier place is part of how the college is "living our values so graduates can be better prepared" to help tackle these problems in the communities where they work, Schleich said. "We're modeling in Portland ways of establishing communities that are duplicable elsewhere."

It's also part of a spirit of being a good neighbor. The college doesn't want to be a source of hundreds of new cars in the area. While its master plan does include several new underground parking structures, NCNM gives every student and employee TriMet passes, and will continue to work for better ways of walking and biking to campus, said Schleich, who is a bus commuter himself.

"We want to do the city proud with what we're up to," he said.

A final decision on where to align high capacity transit in South Portland is likely at least a couple years off. But as the Southwest Corridor Plan steering committee weighs options for the future of transit, roadways and active transportation, NCNM will watch closely, hoping for choices that open up possibilities for its future.