GLEAN artists use trash to generate art and dialogue

Miel-Margarita Paredes holds a plastic sheet she created by melting found plastics together.

GLEAN artists use trash to generate art and dialogue

For months, five artists have been sifting through the Portland area’s discards, salvaging materials to use to make art. The work that they’ve created will soon be on display.

Vanessa Calvert, Jeremy Okai Davis, Asa Mease, Miel-Margarita Paredes and Lauren Prado are participating in GLEAN, an annual program that offers a stipend to local artists to make art with what they find digging around at the Metro Central transfer station in Northwest Portland. Their work will be on exhibit at Lovejoy Square in Northwest Portland beginning Aug. 1.

Find directions and save to calendar

Now in its ninth year, GLEAN was created to help raise awareness about our consumption habits and inspire new ways of looking at trash as a resource. The program is a partnership between Metro, the government that manages the greater Portland area's garbage and recycling system; Recology, a company that manages garbage and recycling facilities; and crackedpots, a local environmental arts nonprofit. Artists are selected each year by a jury of arts and environmental professionals.

Some of this year’s artists saw GLEAN as an opportunity take their work in a new direction. Each year GLEAN reserves a spot for a student, and this year it went to Lauren Prado, who just received her Master of Fine Arts degree in Visual Studies at Pacific Northwest College of Art.

“I wanted to push my comfort zone,” Prado said. “Being in grad school, I kind of got sucked into doing one thing. I wanted to do something that seems kind of difficult and a little gross but still in the end worth it.”

For painter Jeremy Okai Davis, using found materials is a departure from his usual work.

“Digging through trash and using recycled goods is not my forte,” Davis said. “I wanted to jump off the deep end and get some new inspiration.”

In the end, he hopes to see his personal style influenced by the use of unorthodox materials.

“I think I'll come up with some interesting things that aren't necessarily in line with what I usually do,” Davis said. “I hope to show work that people can tell is mine, but think ‘Jeremy has gone off in a different direction.’”

Miel-Margarita Paredes has taken a scientific approach to her work. She’s collecting different types of plastics and melting them together to see which ones will combine to create a new material.

“I'm finding out some of them won't fuse together, and some of them emit more fumes than others.” she said. “It's been great getting to experiment and research.”

Vanessa Calvert credits GLEAN for pushing her to use materials that she normally wouldn’t have considered, like door screens, ropes and roofing paper, which she found especially striking.

“It's really beautiful leathery material that is just so gorgeous on its own that I don't really even want to paint on it.” Calvert said.

“When we see it in the big pile, it doesn't look like anything,” she said. “But by pulling it out, you can focus on how beautiful it is, and pull it away from that sense of it being garbage.”

While most things pitched at the transfer station never held sentimental value, others were once clearly prized. Jeremy Okai Davis found an old family photo album, and he’s using some of the images as source material for his paintings.

“There's a bit of sadness in finding stuff like this,” Davis said. “Why was it discarded? What happened to these people? That really interests me.”

He feels an obligation to faithfully represent the source material while adding a bit of himself to the finished work.

“I want it to tell the photo's story but also a little bit of my own story,” he said.

Asa Mease has also been drawn to discarded personal items.

“I found this packet of high school love letters that are all on notebook school paper,” Mease said. “I read through them and felt like it was a really beautiful moment to get cast away.”

The process has also made him think about the future of his own personal artifacts.

“I've seen a bunch of people dump whole boxes of all of the cards that they've ever gotten,” he said. “I keep all my letters and cards from people and it's kind of sad to think that at some point I, or someone else, will chuck it.”

The weight of waste

The experience of regularly visiting the transfer station has impacted each of this year's GLEAN artists in some way.

It’s made Jeremy Okai Davis try to find creative ways to use scraps that are generated when he’s creating work. He took some circular pieces of wood from the transfer station, and then used the remnant that was created when it was cut as a tracing tool to draw circles on other objects.

Vanessa Calvert is struck by the sheer volume of garbage that moves through the transfer station on any given day.

It’s made her think more critically about the materials she uses.

“I think I already have hoarding tendencies and it makes me want to hoard more. I think ‘it can all be used! Let's not get rid of it because we can do stuff with it!’”

Lauren Prado recognizes a conflict over the amount of waste she observed at the transfer station and her own consumer urges.

“I always talk about my complacency in this culture,” Prado said. “I lust over that new pair of shoes I see online. I don't know how to remove the want from me. It's a strange relationship where I can see it and I can point at it but I can't remove myself from it.”

Miel-Margarita Paredes feels a similar conflict between her ideals and her consumption.

“It's something I always try to be conscious of, but sometimes I make excuses,” she said. “I'm addicted to bubble tea, and I try not to drink it because it comes in this plastic cup. And I'm like ‘oh I'll just have one, a little treat’ and then I find myself with all these random plastic containers that I pledge to reuse.”

Even though she makes an effort to reuse as much as she can, she still finds herself overwhelmed by the amount of things she can’t.

“It’s still so much stuff,” she said. “It makes me feel kind of anxious. I have kids and I just think about what am I leaving for them.” 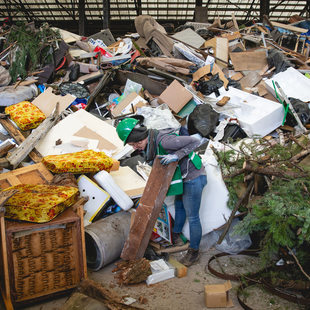 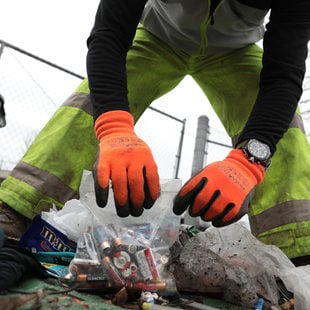