In the past few months, GLEAN artists have picked up a variety of items, including artificial plants and flowers which artist Tyler Corbett is using in a few of his pieces.

Windows have been painted, lampshades have been sewn together and hundreds of artificial flowers have been gathered.

With this year’s GLEAN show less three weeks away, the five artists in the cohort prepare their pieces. Though the mission is the same – to create art out of trash – each artist has taken a different approach.

GLEAN is an art residency run through a collaboration between Metro, environmental and arts nonprofit Crackedpots, and garbage and recycling business Recology. Each year, artists apply, a jury selects, and then the finalists are granted entry to Metro Central Transfer Station to rummage for materials that will eventually become art.

This year’s artists – Christian Barrios, Caroline Borucki, Tyler Corbett, Latifa Medjdoub and Danielle Schlunegger – have all found inspiration in a variety of ways, with many unique but also similar themes running through the art.

Last month, a few of the artists opened their studios to program sponsors for a preview of select pieces that will be unveiled at the opening reception on August 4.

From history to humanity, artists look at trash differently

As a sculpture artist and slow fashion clothier, Caroline Borucki said she often makes it a point to explore themes that relate to the natural world. She said her pieces for GLEAN follow a biological taxonomy that in a way mimics fungi.

“Until I found what form in nature I was getting inspired by, it was a little harder to get working,” Borucki said. “Once I found that, it helped me see the path for all the work I’m going to be doing.”

But, she said, that took a while to figure out. “By seeing and looking at what I’ve collected, I can see the similar forms that pop up,” she said. “So a lot of the circular forms and cone shapes I seem to be picking up – that’s something that just happened in time.”

Borucki, who is a candidate in the Master of Fine Arts program at the Pacific Northwest College of Art, says the process has been challenging, but rewarding. While she has centered a lot of her work around ideas about consumption, for Borucki, visiting the transfer station on a regular basis has deepened that perspective.

“We live in such a throwaway culture and just to see every time a car comes and drops things off, it’s even more scary,” Borucki said. “It kind of made that realization a little more frightening for me and a little more disheartening.”

For other artists, visiting the transfer station has evoked emotions that has made them look at trash differently.

Danielle Schlunegger, who tends to focus on history and historical artifacts in her artwork, has concentrated on finding individual items, looking for their backstory and learning about how they ended up at the transfer station. But, she said, while she began exploring the transfer station with a scientific approach, over time, the humanness of the work has changed her approach to her art.

“Throughout the course of going and gleaning materials, the thing that has really stuck with me is the sort of human element and these warmer, more tender moments, and a lot of sadness,” said Schlunegger. “I wonder about who these people are and what their life is like and I kind of start getting attached to these human moments.”

For Christian Barrios, the transfer station has proven fruitful and quite inspiring. When he first visited the station, he was amazed that he could find virtually anything in the piles of waste – from windows to musical instruments.

“I still think you can find whatever you need at the transfer station,” Barrios said. “I need a trunk and I have a month to find it – I know I’m going to find it.”

Barrios said he didn’t exactly know what he wanted to create when he got started back in February, or how he wanted his pieces to look. But he knew he wanted to convey a message about making his art accessible to anyone.

“I made three pieces that have a lot of color,” Barrios said. “Right now they’re just pieces that focus on technique, color and things that look pretty that you can put somewhere.”

Barrios has incorporated a variety of objects into his art, everything from gauze pads to Ikea furniture. With a background in painting, Barrios even had the chance to take advantage of the paint and other materials available at the transfer station.

On August 4, people are invited to attend the GLEAN opening reception from 6 to 9 p.m. at the Furthermore Gallery inside the Bison Building in Northeast Portland. The event is free and open to the public.

“It’s something people have to see,” Barrios said. “All the art is made out of trash and everything you’re going to see could be in the trash.” 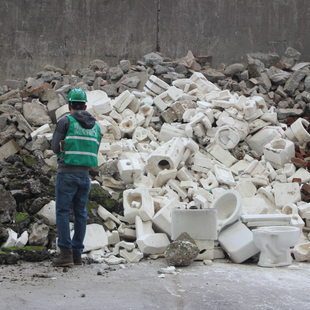