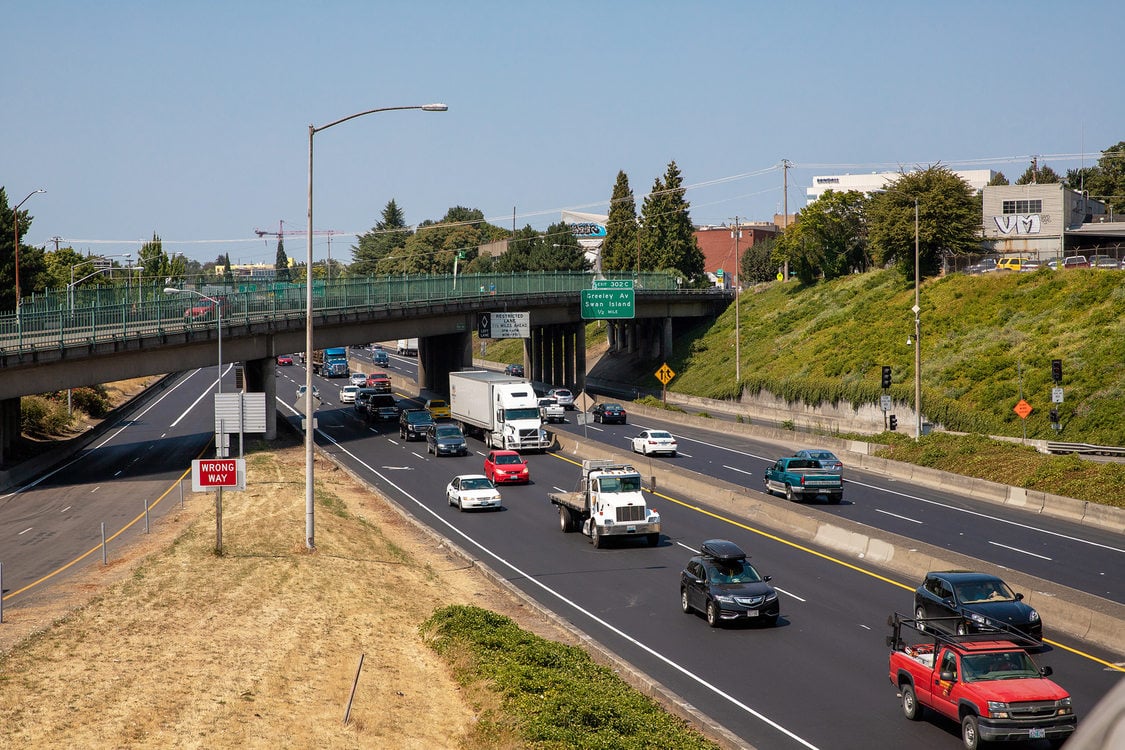 The proposal to expand Interstate 5 between Interstates 84 and 405 was the main focus of the Regional Transportation Plan public hearing. 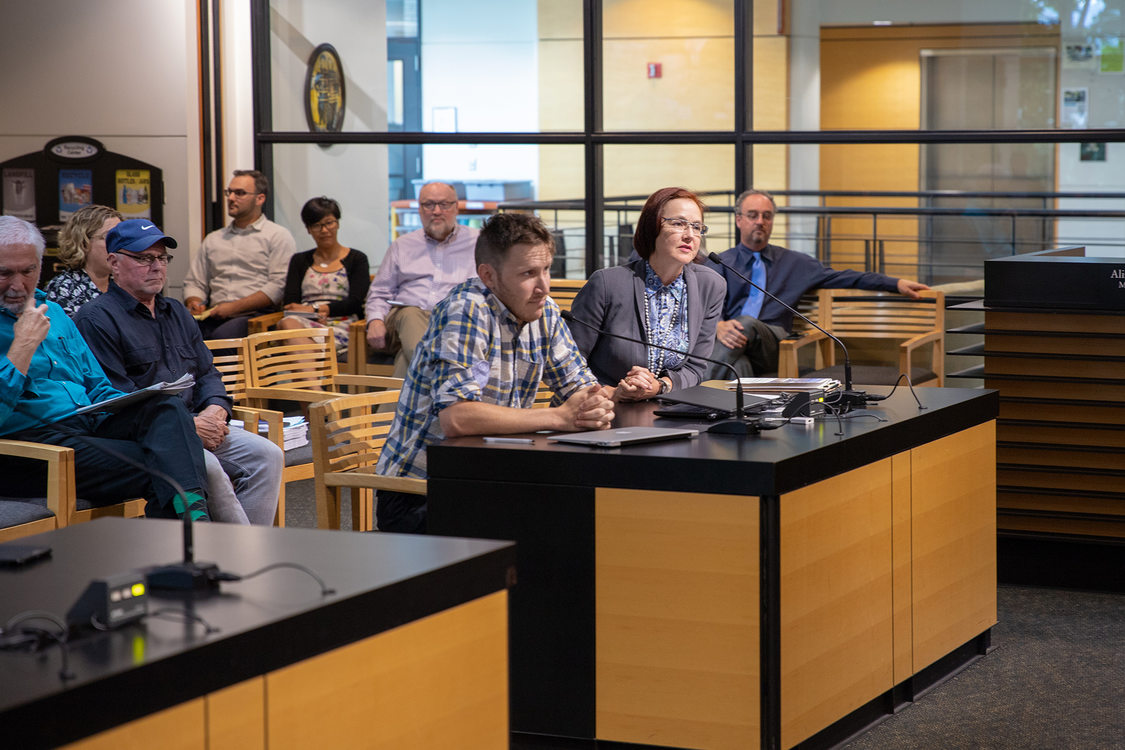 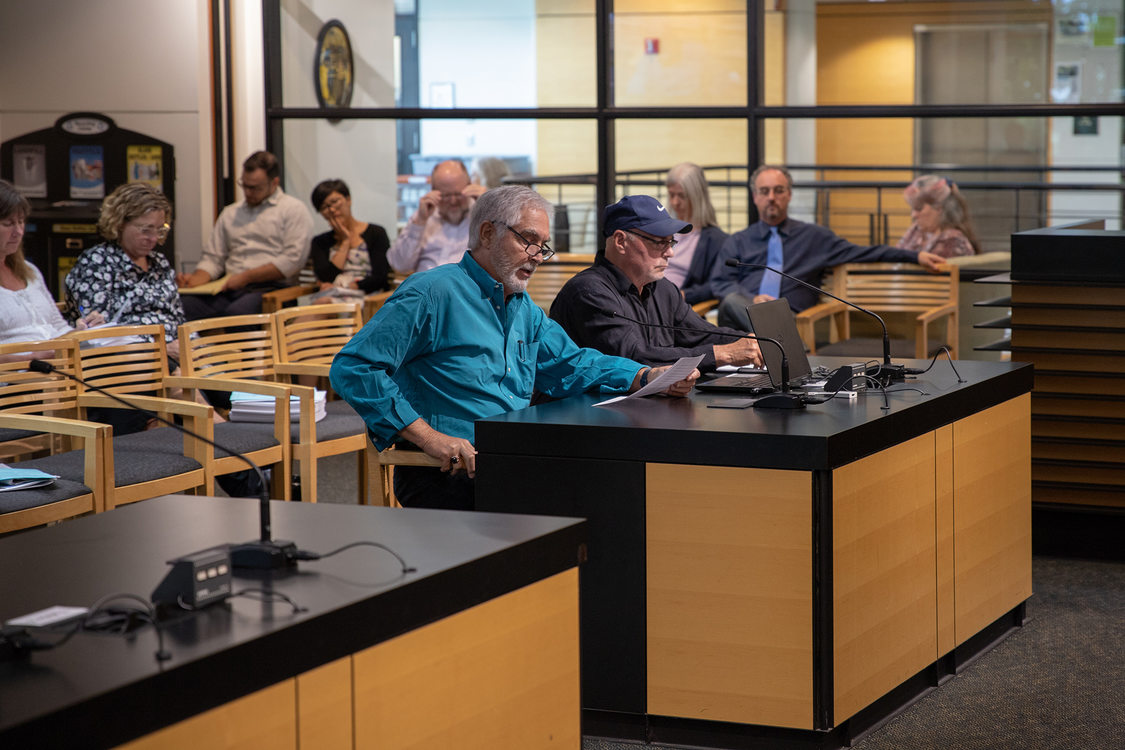 Jim Helser and Jeff Giesler spoke the council in opposition of plans to build a rail yard on Hayden Island.

How much should regional decision-makers invest in expanded freeways and multi-modal alternatives such as biking, walking and transit?

That was the big question up for debate at the first public hearing on the 2018 Regional Transportation Plan on Aug. 2. A small but dedicated group of advocates voiced their opinions on the best way to create a 21st century transportation system on a 20th century budget.

At the center of the debate was the RTP, the federally mandated planning document that is the blueprint for transportation investment for the next 20 years. It includes the policies that guide these investments and a list of potential transportation projects.

The plan also identifies 814 road, highway, bridge, transit, bikeway, trails and sidewalk projects for the $15.4 billion that greater Portland can expect in local, state and federal funds from 2018 to 2040.

Planners have been working on the RTP for three years, the hearing is one of the final steps before the council adopts the plan before the end of the year. Public comments are being accepted through Aug. 13 at oregonmetro.gov/rtp.

The biggest issue discussed at the hearing was whether or not to add capacity to roadways. Ron Swaren presented his idea for a new highway in the region, a route he calls the Western Arterial Highway. Swaren says congestion will only get worse without making more room for cars.

“Without additional capacity… Downtown Portland will really be a parking lot,” he said.

Aaron Brown spoke the council representing the No More Freeway Expansions Coalition. The group is made up of more than 35 businesses and organizations who are opposed to expanding Interstate 5 between Interstates 84 and 405.

The $375 million proposal, which also includes new bikeways, bridges and a street-level cover over I-5, is the second most expensive project in the next 10 years of the RTP. According to the Oregon Department of Transportation, that segment of I-5 has up to 12 hours of traffic congestion per day and has the highest crash rate in the state.

Brown said the coalition opposes the expansion because it would not relieve congestion, and adding a new lane would induce more traffic. In addition, the group says more cars on I-5 would increase carbon emissions contributing to global warming and lower air quality.

Brown referred to a recent study of air quality at Harriet Tubman Middle School that found high levels of the toxic chemicals acrolein, benzene and naphthalene. The study said the air pollution was directly related to vehicle exhaust on I-5 and recommends that students limit their time outside.

“The students at Harriet Tubman middle school aren't going to be allowed outdoor recess because I-5 is so close, we are planning on expanding I-5 even farther into their backyard,” Brown said.

Sarah Iannarone also spoke against the expansion project and urged decision-makers to be global leaders combatting climate change with urban planning. She is disappointed in the priorities of the RTP which she says represent “short-term thinking.”

Iannarone asked that as much money as possible be invested in alternate modes of transportation, and to limit the money paying for single-occupancy vehicles.

“Climate change won't wait for our politics to catch up, we need to be bold, right now,” Iannarone said. “Not tomorrow, not ten years from now.”

Jim Helser and Jeff Giesler came to the meeting to on behalf of people who live on Hayden Island. The Island, bordered by the Columbia River and the North Portland Harbor, has 826 acres of natural areas including wetlands, floodplains and hardwood forests.

Helser and Giesler testified against a proposal to develop a rail yard on the island. Helser spoke of a history of tension between the Port of Portland and the island community. Geisler said the rail yard development will increase pollution, negatively affecting the people who live there.

“We have the state's largest manufactured home community on West Hayden Island and a lot of those are senior citizens, minimal income, if not fixed retirement income,” Giesler said. “Their health benefits are a major concern.”

Chris Smith, vice chair of the Planning and Sustainability Commission for the City of Portland applauded planners for making safety a priority in the RTP. He highlighted the aspiration of Vision Zero, to have zero deaths and life-changing injuries from traffic collisions by 2035 - but said the projects in the plan don’t support the goal in East Portland.

“If Vision Zero is our yardstick, then I say we have a big miss in that we have no projects for 82nd Avenue, a place that is regularly killing people in our transportation network,” Smith said.