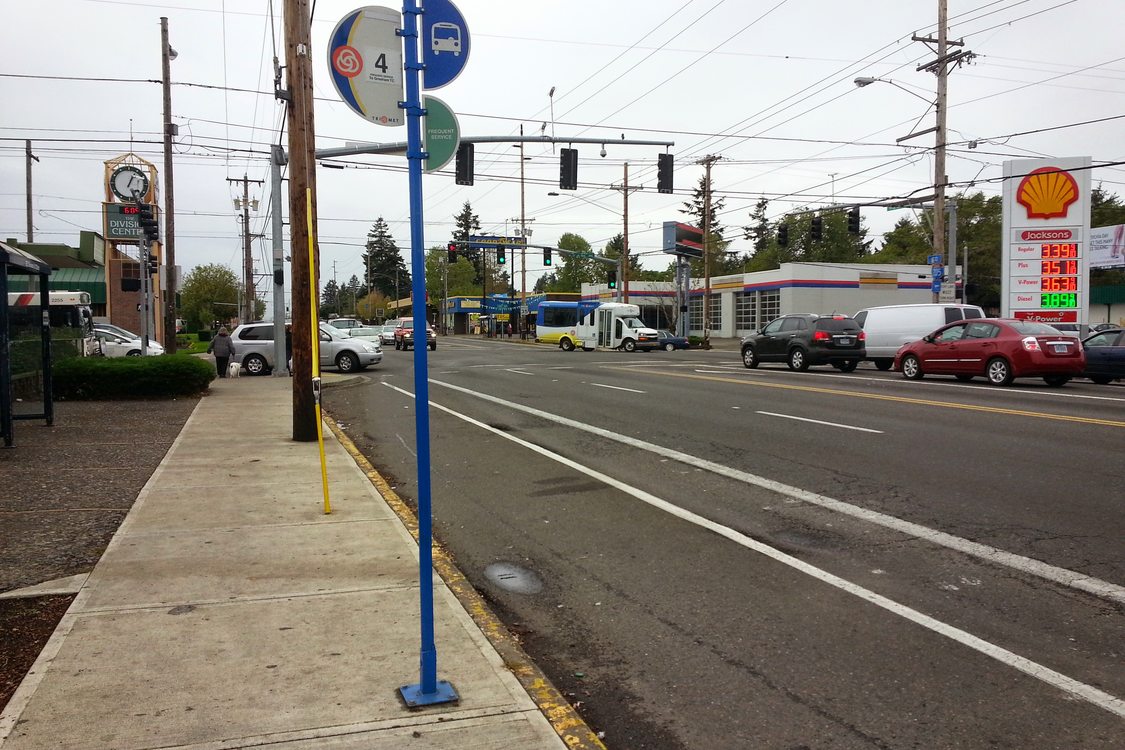 The intersection of 122nd and Division is one of the busiest transit crossings in the region. It's also the heart of Midway, a district seeking to transform itself from a strip to a destination in its own right. 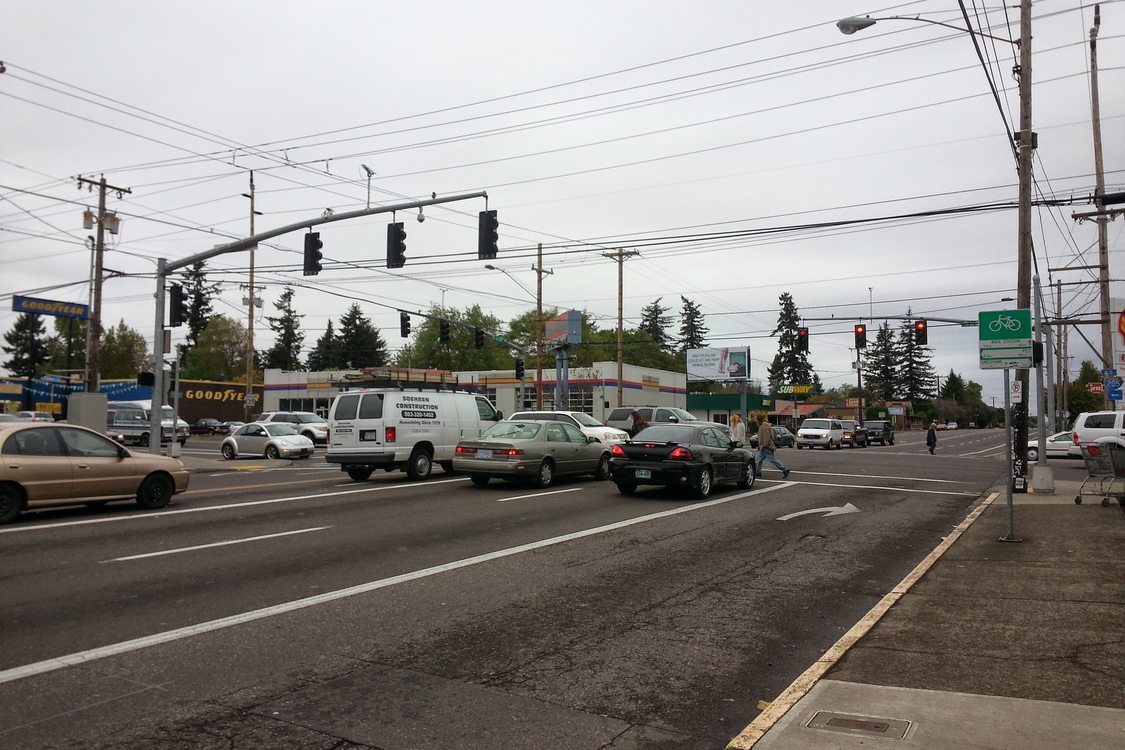 Midway has long been a place on the way to someplace else. Local leaders hope faster transit will help in their efforts to improve people's lives in the district while also helping it develop its own place identity. 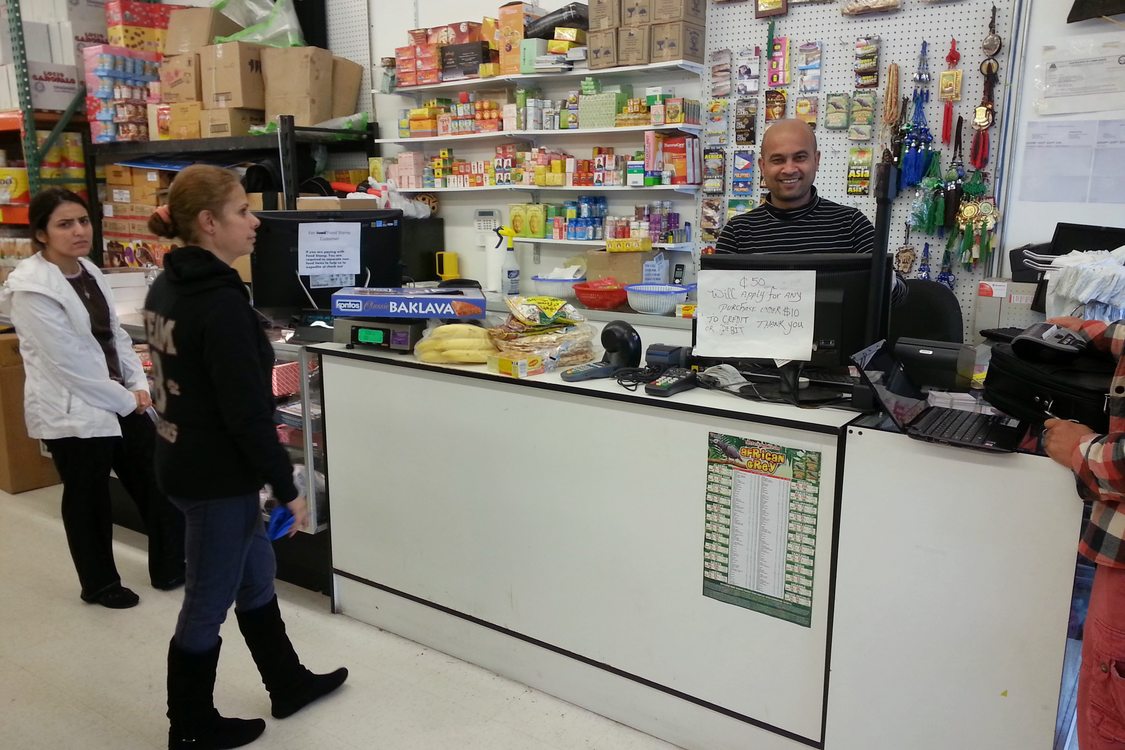 The products on the shelves at Mingala International Market reflect Midway's remarkable diversity. It's just one of several ethnic groceries in the district. 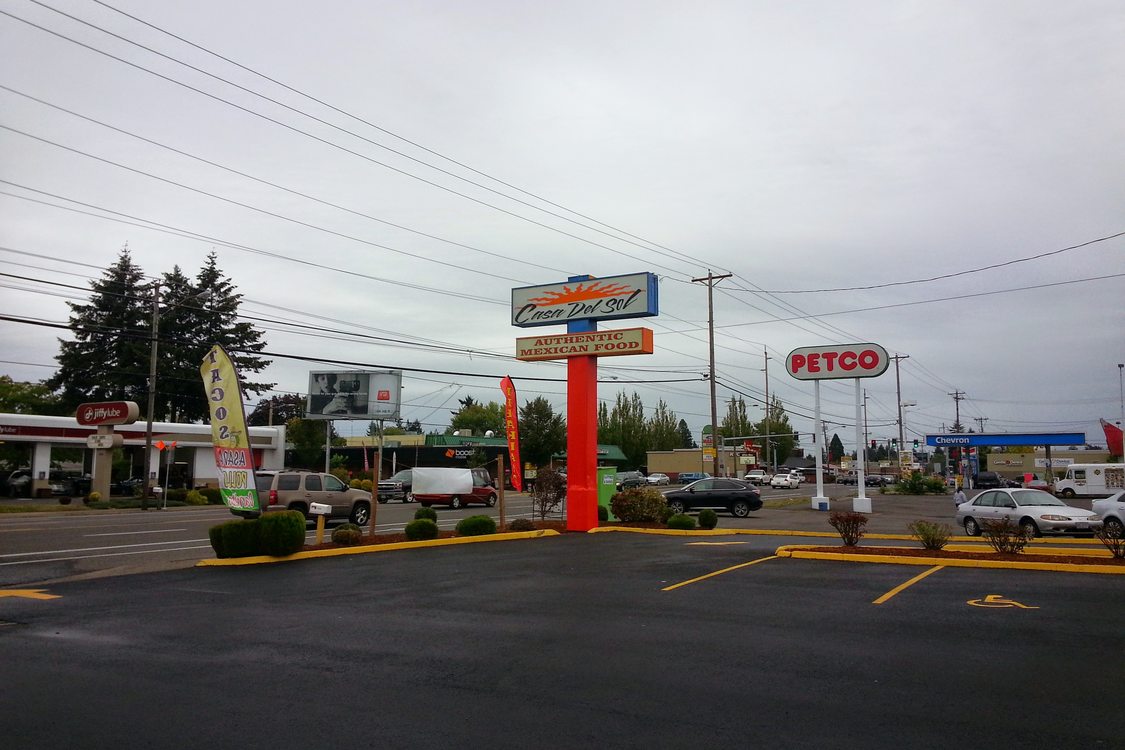 It's possible to eat from around the world on the several dozen blocks that make up the Midway district. Casa del Sol taqueria, at 138th, is one of many such options on the strip. 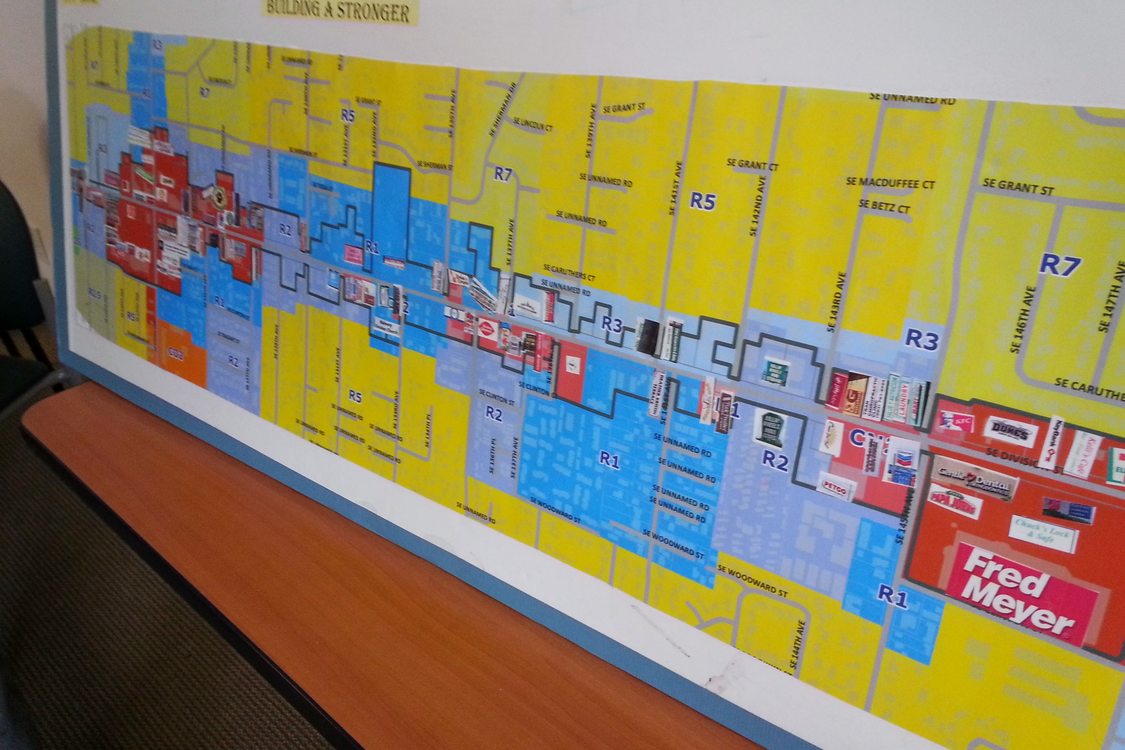 The Midway district runs along Division for many blocks, and features a wide variety of businesses and zoning.

A map of the main Midway district details the wide variety of businesses and zoning in the area. 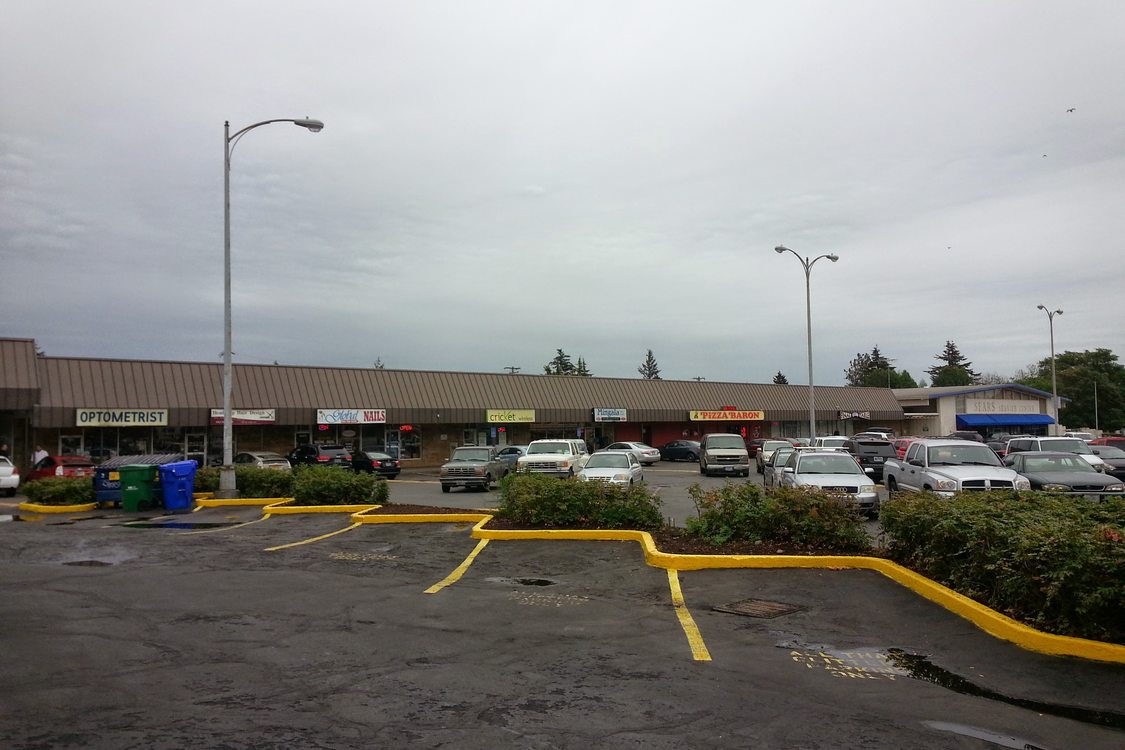 Local leaders hope that the Powell-Division project brings investment to Midway that improves the neighborhood's livability without diminishing its diversity.

"Where the heck is Midway?"

The Division Midway Alliance doesn't run from this question. In fact, they feature it prominently on their website.

The answer is both literal – Midway is an East Portland business district roughly halfway between the Willamette River and Gresham – and complex.

To the extent it has had a definition at all, Midway has long been a place to pass through on the way to someplace else, a congested strip of small businesses, fast food restaurants, apartments and trailer courts along wide Division Street between 117th and 148th avenues.

But Midway has also long been changing, from being a largely rural neighborhood through the 1950s through annexation by Portland in the 1980s and 1990s, to an increasingly dense, diverse district today.

That was in full display a couple of weeks ago at the second annual Midway Harvest Festival, held in a parking lot near 148th Avenue and Division. The festival's T-shirt featured seven languages, several of which could be heard as residents played classic carnival games and local bands drowned out the traffic on Division.

And with the promise of new faster transit on the horizon via Metro's Powell-Division Transit and Development Project, and growing efforts to forge a new identity and vision, Midway is on its way to being more of a destination in itself.

That is the goal of the Division Midway Alliance, a 2-year-old business association working through the Portland Development Commission's Neighborhood Prosperity Initiative to find community-driven approaches to improving the economy and livability in this rapidly diversifying neighborhood.

Step into Mingala International Market, in a modest shopping center at the intersection of 122nd Avenue and Division – the heart of Midway – and you'll see the district's potential.

Yusuf Iqbal, a native of Myanmar, opened Mingala here four years ago. Inside his clean, bright store, large bags of Thai rice are piled next to enticing sweet and savory treats from many cultures. A halal butcher does brisk business in back. Customers line up to buy spices, staples and snacks from the world over.

Iqbal chose this location for two reasons: the diversity of the area and the intersection of two busy bus lines – the 4-Division and the 71-122nd Avenue – just steps from his door. Many of his customers arrive by bus and on foot, he said.

Recognizing that the diversity of the area includes many ethnic groups, Iqbal stocks a selection intended to serve people from all over the world. "We rely on a niche market, but combine many niches into one," Iqbal said. Business is good but competitive – there are at least half a dozen ethnic markets within a close distance.

Division Midway Alliance manager Lori Boisen, who has lived in the neighborhood since 1999, thinks businesses like Iqbal's are among Midway's greatest assets. "People have the ability to shop from around the world here," she said.

But Boisen recognizes that the changing community – with its distinct cultures from all over the world – can also pose a challenge for the kind of cohesion the Division Midway Alliance is trying to create. "How do you build trust? That's one of the things we're working on," she said.

The alliance uses several strategies. It develops branding and local identity initiatives; organizes events like the Harvest Festival, a night market and neighborhood service events; and advocates for the district in planning decisions like the Powell-Division project. Boisen serves on the project's steering committee.

But most of all, Boisen tries to get people talking and thinking about what they want for the future.

"Building trust is building relationships," Boisen said. "We're trying to build relationships with key community members who will help us connect with other people in the community."

It's an approach that's paying off already. Boisen recounted that a woman had approached her at the harvest festival asking how to get involved. "She sees that the businesses are getting busier, and she wants to be a part of that movement," she said.

"When you're in the middle of it, sometimes you forget to notice the successes," Boisen admits.

And it's true – despite recent gains, it's hard to deny that Midway, like much of East Portland, faces deep, entrenched challenges as it looks to the future. Census tracts in the area hover around 18 to 25 percent of households in poverty. Graffiti mars business signs and empty storefronts abound. Vacant lots and low-quality housing add to a sense that opportunity is more distant than elsewhere in the city.

Midway is heavily transit-dependent, as is most of East Portland, where transit commute rates are almost double the region's average. Over 700 people get on and off buses each day around the intersection of 122nd and Division. Despite the mass ridership, transit commute times are roughly 30 percent longer in East Portland than regionally, at nearly 60 minutes each day.

Meanwhile, people walking in the area face one of the region's most dangerous stretches of road. Sidewalks start and stop inconsistently. Crosswalks are often more than a quarter-mile apart, requiring pedestrians to walk as much as 10 minutes out of their way just to cross the street safely.

Yet the streets teem with people. It's common in the area to see people of all ages – perhaps holding shopping bags or pushing a stroller – standing on either side of the road, looking for a rare gap in traffic to dart across five busy lanes, or waiting for the bus.

One of these is Kem Marks, an AmeriCorps Vista intern at the alliance, local resident  and a Powell-Division project steering committee member.

Marks is visually impaired and, though he doesn't need it, he'll often walk with a white cane in the hope that crossing the street will be safer. He jokes that walking in the area has made his beard prematurely gray. "I would do more walking if there was the infrastructure," he said, noting that many residents in the area, including him, take the bus just a few stops for errands because walking is too unsafe.

"We have a low walkability score, yet the reality is that a majority of our residents walk," Boisen said. "We're working on that," she adds. She credits the Portland Bureau of Transportation for taking some serious efforts to add more crosswalks and fill in sidewalks on the stretch.

Although it's easy to think of the Powell-Division project as just a fast commuting connection to downtown Portland, Portland Community College-Southeast or Gresham, Marks has high hopes for how it can improve life and mobility for people within the Midway area – even those who aren't getting on a bus.

With new transit comes new economic investment, which has Boisen excited. "There's a tremendous opportunity for us to implement transit-oriented development in this area that will be really beneficial," she said.

But locals also eye this opportunity with some caution, as they look at the displacement occurring elsewhere in the region, often alongside transit investments – the very displacement contributing to growing diversity but simultaneous housing crunches in Midway.

Marks, whose rent has already jumped 16 percent in the last two years, hopes the Powell-Division project can demonstrate that displacement needn't be an inevitable side effect of new transit investments. He has been pleased to see it be a major part of project conversations so far. "I think there's enough emphasis on equity that we can use this project as a way of spotlighting the [displacement] issue," he said, "and leverage some policy decisions to fight it."

Boisen similarly tempers her hopes for new development and investment with a commitment to maintaining the area's distinctive diversity. "I would like to see Midway be a regional destination with the same vibrancy of the people we already have," she said.

In 2013, the Division Midway Alliance worked with a consultant to come up with a new brand and name, said David Edwards, the alliance's president. Edwards, an independent insurance agent in Midway for many years, grew up in the neighborhood and remembers when Division had just two lanes. It has changed a lot since then.

The consultant came up with several potential new names for the district, Edwards said. But none seemed better than the one that has defined the area for decades: Midway.

They also created a fresh logo emphasizing a strong community in a valley between two mountains, and with it a flexible tagline: "The Way," as in "The way to work", "The way to shop," "The way to live."

"Most people live here out of necessity," Marks said. "We have to come up with an identity that says, 'This is Midway, this is why people want to live here and do business here."

Boisen said the old name and new logo and tagline emphasize that in addition to the thousands of people passing through here each day to other places, Midway is itself becoming a more defined place.

"We are here, and we are making our way in Midway," she said.