Members of the Powell-Division Transit and Development Project mostly expressed support for using the Tilikum Crossing for a Portland-to-Gresham rapid bus line Monday, moments after the committee voted to recommend a Division Street route for the line.

After three years of collaboration and conversation, a steering committee of community leaders reached a recommendation Monday regarding the future of a Portland-to-Gresham rapid bus line.

Meeting at Gresham City Hall, the Powell-Division Transit and Development Project Steering Committee decided to move forward on a what's known as a Locally Preferred Alternative for the line, selecting a route largely along Division Street between Portland and downtown Gresham, with roughly three stations a mile.

Expected to open in 2021, the project would be the first bus rapid bus transit line in TriMet’s network. It would use longer buses that make fewer stops than the current 4-Division, board faster and employ traffic signal technology to provide a faster, more reliable trip to riders than a regular bus. Preliminary estimates say the trips could be 15 to 20 percent faster than today's 4-Division.

The project is expected to cost about $175 million, with $100 million coming from a federal grant and $75 million from local and regional partners. Beyond improved stations and new longer buses, the project budget includes improved access to the line for people walking, bicycling and using mobility devices, particularly in East Portland.

The decision to advance the locally preferred alternative comes after the committee – whose 22 members include community representatives and elected officials from throughout the corridor – delayed moving forward at its last meeting Oct. 24 in East Portland.

“Originally, given the set of options and given where the conversation was at last week’s meeting, I expressed a red card,” said OPAL Environmental Justice Oregon representative and Vivian Satterfield. “Having engaged in further discussion with a variety of project staff along with my members, I feel satisfactory in being able to change my vote to a yellow card.”

“I’m moving to a yellow card and we would love to be in the green card zone,” Reddy said. “The yellow card just means we support this project, but there are these to-do items.”

Both expressed that to them, the project is much more than just about transit down the corridor.

“Where we are now is a result of a lot of community input saying transit projects aren’t just about transit,” Satterfield said. “They’re about a variety of different things and they matter to us just as much – sometimes even a little bit more.”

Metro Councilor Bob Stacey, co-chair of the steering committee with Metro Councilor Shirley Craddick, joked that at previous meetings he was not at a green card, but rather a “lime card”.

Stacey said he wanted to see the project be leveraged to advance a number of transportation, housing and economic development goals in the corridor. He also acknowledged that the project won't reach as far as he had once hoped.

“I, too, don’t see everything I wanted out of this project,” Stacey said. “We all recognize there’s more work to be done.”

But Stacey added that the work doesn’t end with the adoption of the BRT.

“There are so many urgent needs in this corridor, in this part of the community and the community that we have to continue to address,” Stacey said.

Bridge decision yet to come

Now that the committee has decided to advance their project recommendation, another component of the process is choosing whether the line uses the Hawthorne Bridge or the Tilikum Crossing to cross the Willamette River. Although not formally part of the committee's recommendation, they discussed the options Monday night.

Though many committee members had expressed support for Tilikum Crossing in the past, there were concerns about travel reliability crossing Union Pacific’s railroad at Southeast Eighth Avenue, where frequent trains can block traffic for long stretches.

However, TriMet’s general manager Neil McFarlane told the committee that TriMet is in talks with the railroad to modernize operations at a nearby rail yard in a way that could reduce those train backups, improving both safety and reliability for people riding transit, walking, bicycling and driving in the area.

On this news, the committee expressed a preference for the Tilikum Crossing. The bridge crossing will be further refined as the project enters more detailed design.

Though the steering committee has finished its primary task, the bus rapid transit line must pass a few more milestones in the coming weeks. Its next step is  consideration by the Gresham and Portland city councils, Multnomah County Commission and TriMet board of directors.

After each of those bodies takes action on the proposed project, the Metro Council will formally adopt the locally preferred alternative in early 2017.

“I just want to say thank you. I really have enjoyed working with you,” said Metro Councilor Shirley Craddick at the meeting's adjournment. “We’ve set a new standard for how community decision-making is made.” 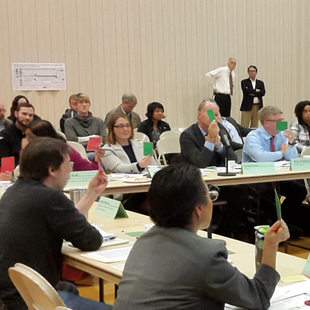