Ahavath Achim's distinctive beehive dome, built in 1966, is a familiar sight to thousands of people passing by every day. The congregation moved here after their previous synagogue was destroyed; now they are contemplating another move.

Ahavath Achim's distinctive beehive dome, built in 1966, is a familiar sight to thousands of people passing by every day on Barbur Boulevard. The congregation moved here after their previous synagogue was destroyed; now they are contemplating another move. 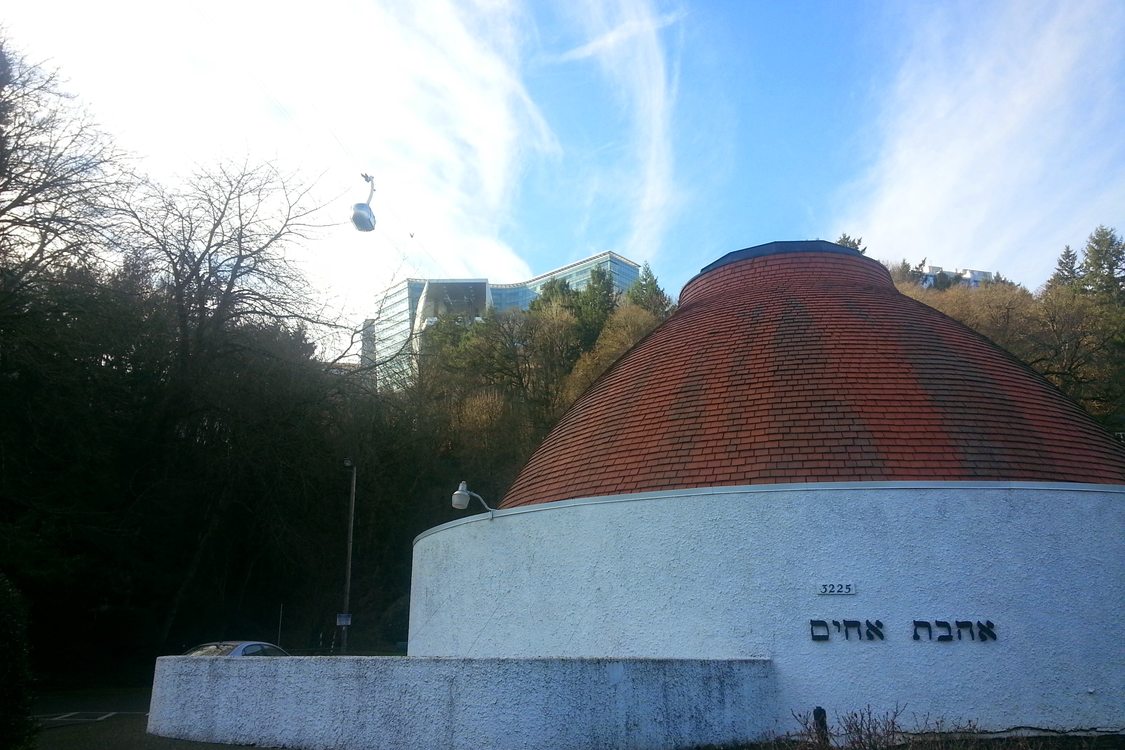 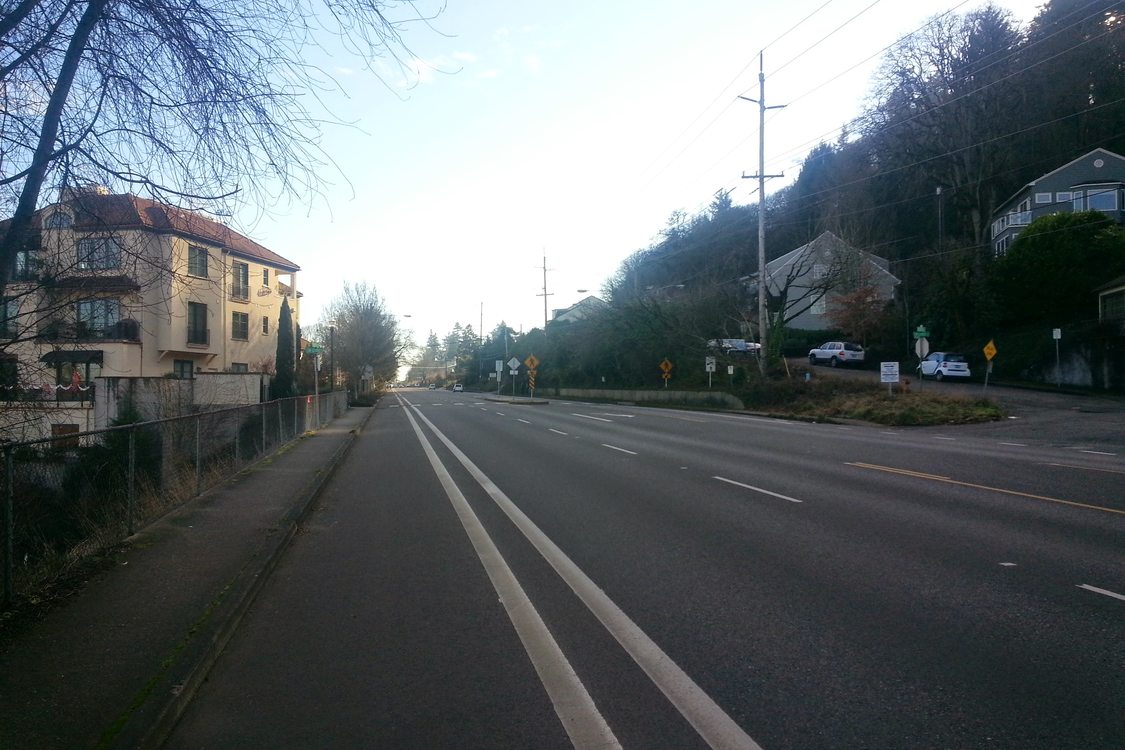 The Southwest Corridor Plan is considering Barbur Boulevard as one potential alignment for future high capacity transit -- either light rail or bus rapid transit. An alignment here or on nearby Naito Parkway would likely mean needing to build some sort of connection to Marquam Hill -- which would likely impact the synagogue's property.

More than fifty years after a major urban renewal project led to the destruction of its first synagogue, members of the historic Ahavath Achim congregation are contemplating another move.

But this time the circumstances are very different, as the community looks at changes among its membership and anticipates impacts from potential new transit past its distinctive beehive synagogue.

For one thing, a new location could reconnect members instead of being part of dispersing them.

And for another, they probably wouldn't put their building on rollers this time. Even if they do, they likely won't face as heartbreaking a surprise as they did last time they moved.

A hot, heartbreaking summer in 1962

It was a hard day in June 1962 when they found the crack in the old synagogue.

Movers had lifted the then 30-year-old Ahavath Achim synagogue onto wheels for a challenging move out of the way of a sweeping downtown urban renewal project that razed much of a dense Jewish and Italian district known as South Portland.

Members of Ahavath Achim – a small Sephardic congregation founded by Turkish and Greek immigrants in 1913 – had raised enough money to move their striking Moorish-inspired synagogue at SW Third Avenue and Sherman Street to a new site up the hill on Barbur Boulevard, out of the way of the coming South Auditorium urban renewal project.

A city commissioner had helped make the new site possible. The experienced movers were confident the move could be done, assuring the congregation they could simply pick up the building – with everything inside – and drop it on a new foundation at the new site, with hardly a scratch.

It was not to be. The synagogue's move had barely begun before workers found the crack in one of the building's fundamental support columns.

The move stopped immediately as debate began about whether the building could be saved. Meanwhile, temperatures climbed into the 90s, and the wheels of the moving platform sank into the asphalt, exacerbating the situation and further damaging the building.

Ahavath Achim board member Richard Matza was born in 1947 and raised in South Portland. Walking around an area now dominated by high-rise apartment and office buildings and Portland State University, he can still remember the exact locations of friends' homes, kosher delis and groceries and synagogues, including the old Ahavath Achim. (His family's home, on SW Fifth Avenue at Jackson Street, survived the renewal area, though it was later acquired and razed for a MAX turnaround.)

That old neighborhood is just a memory now, and so is the original Ahavath Achim. After weeks of debate, city inspectors determined the immobilized synagogue would have to be destroyed. By August 23, wreckers had replaced movers, and the synagogue was razed on the spot. "Synagogue crumbles as renewal fatality," a headline in The Oregonian mourned.

Within the span of a few weeks, the congregation had to begin considering a fully new home instead of anticipating just a new location.

The building they ultimately constructed – following a successful court battle to recoup their insurance claim – became one of the most distinctive structures on Barbur Boulevard: a bleach-white and red-tile roofed beehive pressed against the woods of Marquam Hill. Opened in 1966, the building was designed by renowned Portland architect John Storrs, whose other designs include the Oregon College of Art and Craft and Salishan Lodge in Gleneden Beach.

In addition to its beauty, Storrs created a building respectful of tradition and practical in upkeep, inspired by a synagogue he had seen in Israel.

That distinctive beehive dome? It allows for services to be conducted without amplifying speakers' voices, in keeping with Orthodox rules. The sanctuary arrangement allows men, women and children to sit separately during worship, while a fully kosher kitchen and social hall provide for community-building. An all-concrete structure and tile roof with a high, stained-glass skylight support elegant beauty and easy maintenance.

Nearly fifty years since its completion, worshippers are still proud of their synagogue, Matza said.

But many other things have changed. Though the congregation's size has remained stable at roughly 85 families, its members no longer live in the same neighborhood. Hardly anyone walks to services anymore, because hardly anyone lives close enough. Following the urban renewal projects and later construction of freeways that destroyed even more of the neighborhood, most dispersed – largely into the Portland's West Hills. "Urban renewal did quite a number on the neighborhood," Matza said.

And the synagogue's current neighborhood is changing, too. Some new development has come to Barbur, but the big changes have been up on Marquam Hill, where medical buildings tower over the Ahavath Achim. OHSU and VA Hospital commuters often park around the synagogue on Barbur and climb an informal trail behind the synagogue to Terwilliger Boulevard Matza said, taking up limited spaces on local streets. (The synagogue also makes a little income renting a few of its parking spots out.)

Even the Portland Aerial Tram, which glides quietly and seemingly unobtrusively overhead, has impacted the synagogue. For several months every year, the sun's angle means the tram's shadow passes directly over the synagogue's distinctive skylight, briefly darkening the sanctuary every few minutes, even during services.

"That's in the fall during our high holiday season," Matza said.

And as the Southwest Corridor Plan contemplates high capacity transit down Barbur or nearby Naito Parkway, synagogue members expect further change on the horizon.

If the transit project – whether light rail or bus rapid transit – runs along Barbur or Naito, people will have to get from its surface-level station up the steep slopes of Marquam Hill. But making that happen is a key design challenge. Possibilities on the table include some sort of elevator or escalator system that would directly pass the synagogue, causing major impacts to its property – though likely not to the building itself.

Still, the congregation is watching closely to see what those impacts would be. "All the feasible options seem to go right through where we are," Matza said. (A tunnel option, also on the table, would likely not significantly impact the synagogue property, though it would be much more costly.)

But it's not the first time in recent history the synagogue has been ready to move. When concepts for the aerial tram were being developed, the synagogue was already preparing itself to move. Some tram concepts included an accompanying gondola from Barbur to Marquam Hill and possibly a parking garage, and synagogue members were ready to sell their property to rebuild elsewhere before those options were left on the drawing board.

Now they are discussing a move again.

This time a move is easier to contemplate than 50 years ago, though, because it won't be accompanied by the dispersal of a whole Jewish community. Indeed, it may actually serve them better, Matza said – particularly if space could be located in Hillsdale, where a new concentration of Jewish residents, businesses and synagogues is growing.

If relocation happens again, the synagogue won't try to move the building again. "John Storrs built it in a way that's permanent," Matza said. The congregation would need to be reimbursed sufficiently to rebuild someplace else, he said.

But if a move comes, Ahavath Achim may well build a replica of that beehive building – though built from heartbreak, it has come to feel like home.