Sharon Gary-Smith, a prominent leader in the Portland community, says much of her inspiration for social justice and racial equity came from her parents.

Sharon Gary-Smith, longtime social justice activist and co-chair of Metro's Committee on Racial Equity, has been honored by the Portland Human Rights Commission with its Lifetime Achievement Award.

Gary-Smith most recently served as executive director of the McKenzie River Gathering Foundation, a community foundation that supports grassroots organizations pushing for social change throughout Oregon.

She has also worked as the vice president of governmental affairs and development at the Austin Area Urban League in Texas and with a national black women's health project in Atlanta, Ga.

In March, she was named co-chair of the Committee on Racial Equity, an advisory committee formed to help the Metro Council and staff carry out the agency's strategic plan to advance racial equity, diversity and inclusion across the region.

The self-described "angry, gentle woman" credits her parents with the supportive upbringing that made her ready to take on the world.

"They had four daughters who they taught were fierce, fabulous, wonderful and brilliant and anybody else who didn't see that, didn't acknowledge that and didn’t respect that had to be confused," Gary-Smith said.

"I really am just a little black girl who just wanted to play with everybody else … and I realized it would be lonely if I didn't work for others to play with me. And that has been the simple basis for what has been an incredibly wonderful generous life."

Raahi Reddy, director of Metro's Diversity, Equity and Inclusion program, has known Gary-Smith for years and says the agency is lucky to have her serving as co-chair of CORE, pointing to her work with communities of color.

"She really is a well-respected leader who sees the incredible potential for so many communities and understands what it takes to invest in the organizations that work with those communities," Reddy said. "As we're thinking about our investments and capacity as an agency to support communities of color throughout the region, to have her professional experience, her life experience is pretty tremendous."

Metro Councilor Shirley Craddick, who serves as a liaison to CORE, says she's just getting to know Gary-Smith, but has been impressed so far with her enthusiasm, support and esprit de corps. 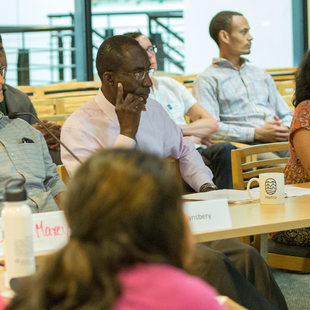