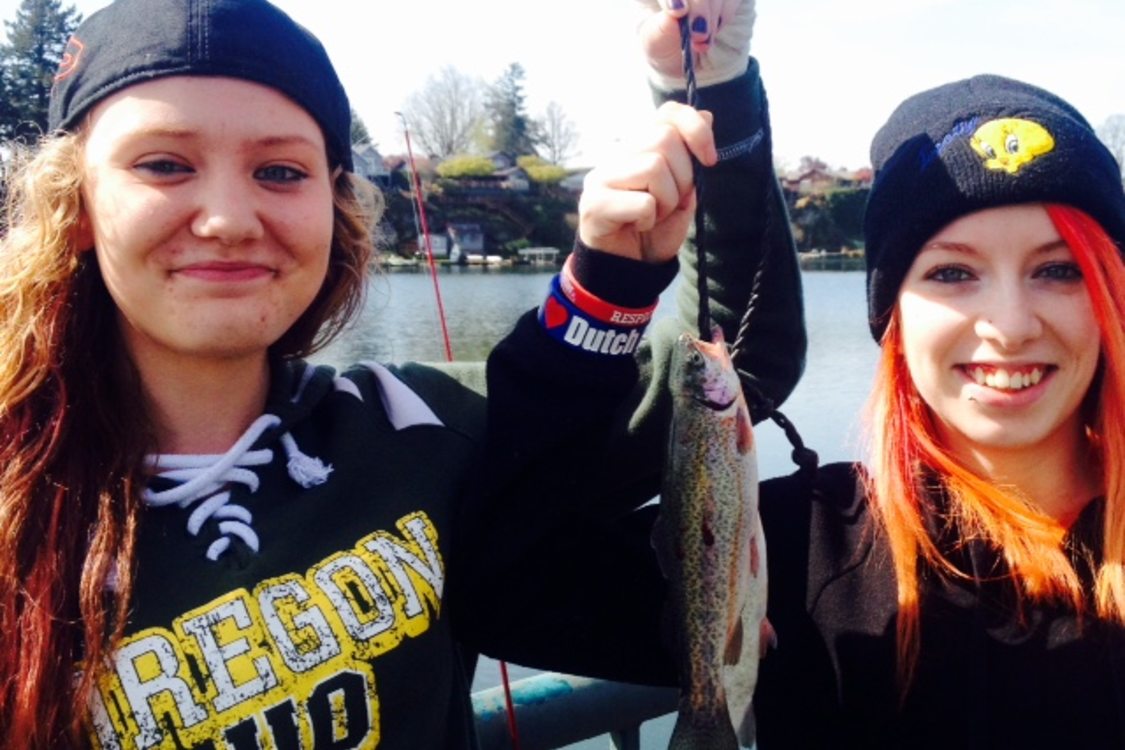 Wish To Fish: Casting Beyond Limits brought together people with disabilities and at-risk youths for a fun day of fishing at Blue Lake Regional Park.

Wish To Fish: Casting Beyond Limits brought together people with disabilities and at-risk youths for a fun day of fishing at Blue Lake Regional Park. 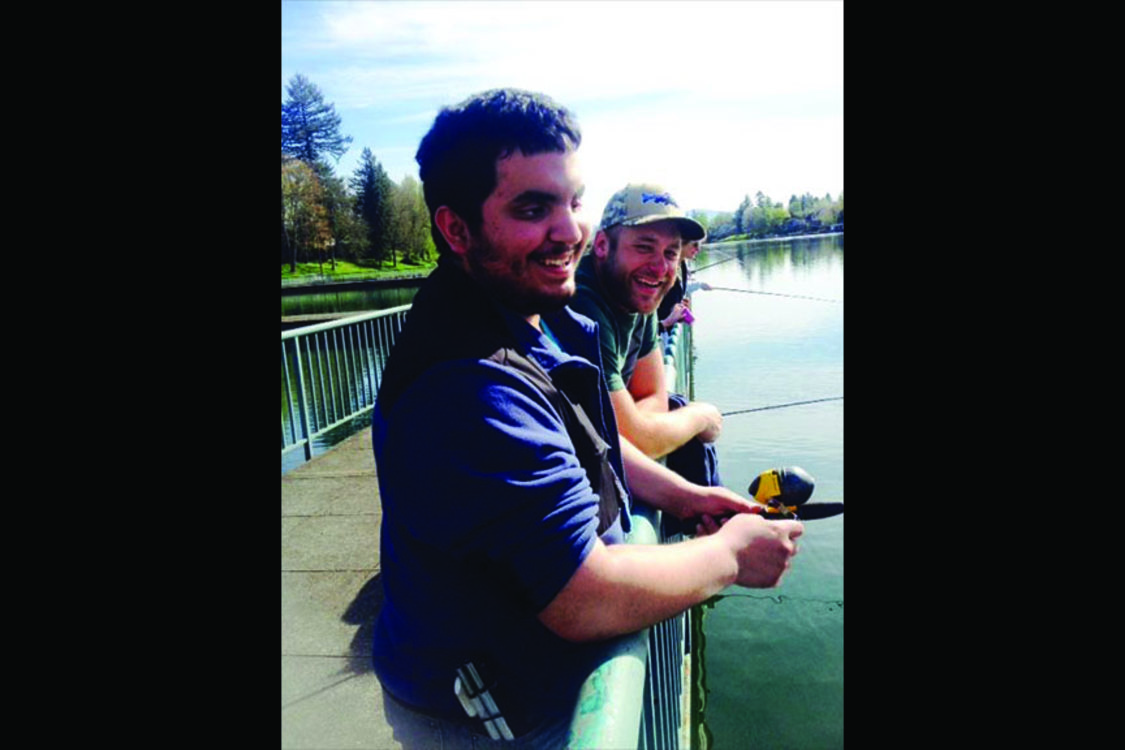 A nonchalant remark from Miguel Peña, who is blind, inspired the creation of Wish to Fish. At the event, he enjoyed fishing with Ryan Hixson, a Metro property management specialist.

A nonchalant remark from Miguel Peña, who is blind, inspired the creation of Wish to Fish. At the event, he enjoyed fishing with Ryan Hixson, a Metro property management specialist. 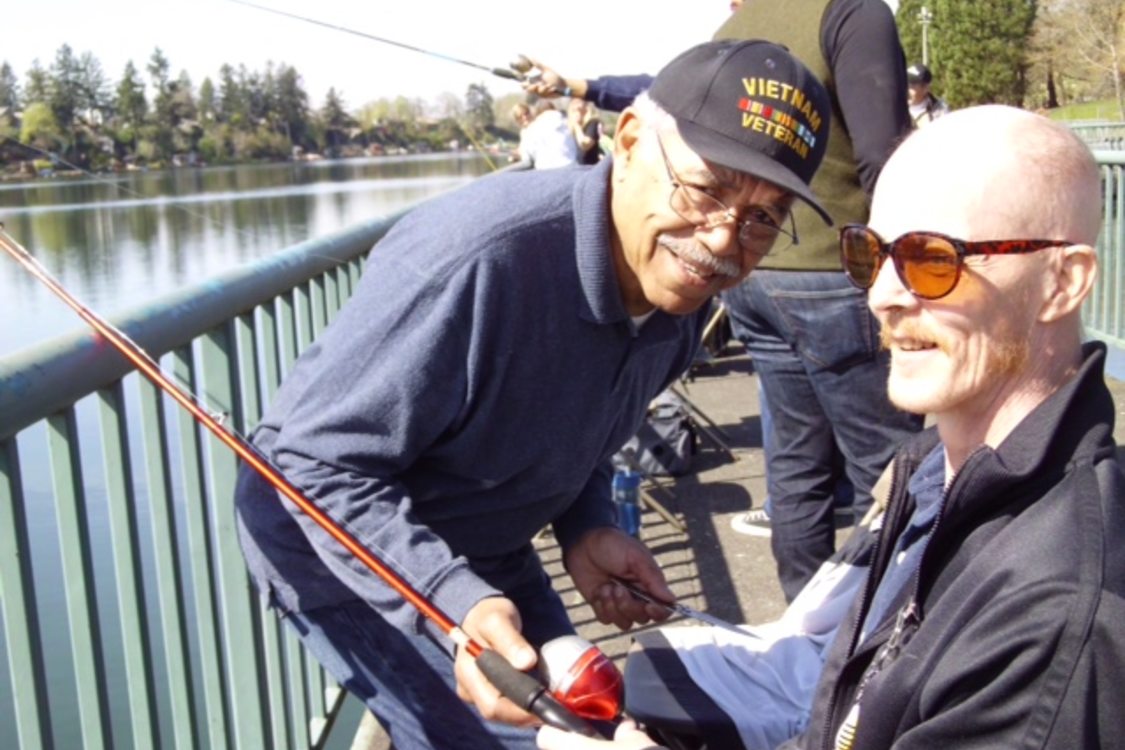 John Fleming and Flor Matias wait for a bite.

Bruce Broussard and Mike Merwyn wait for a bite. 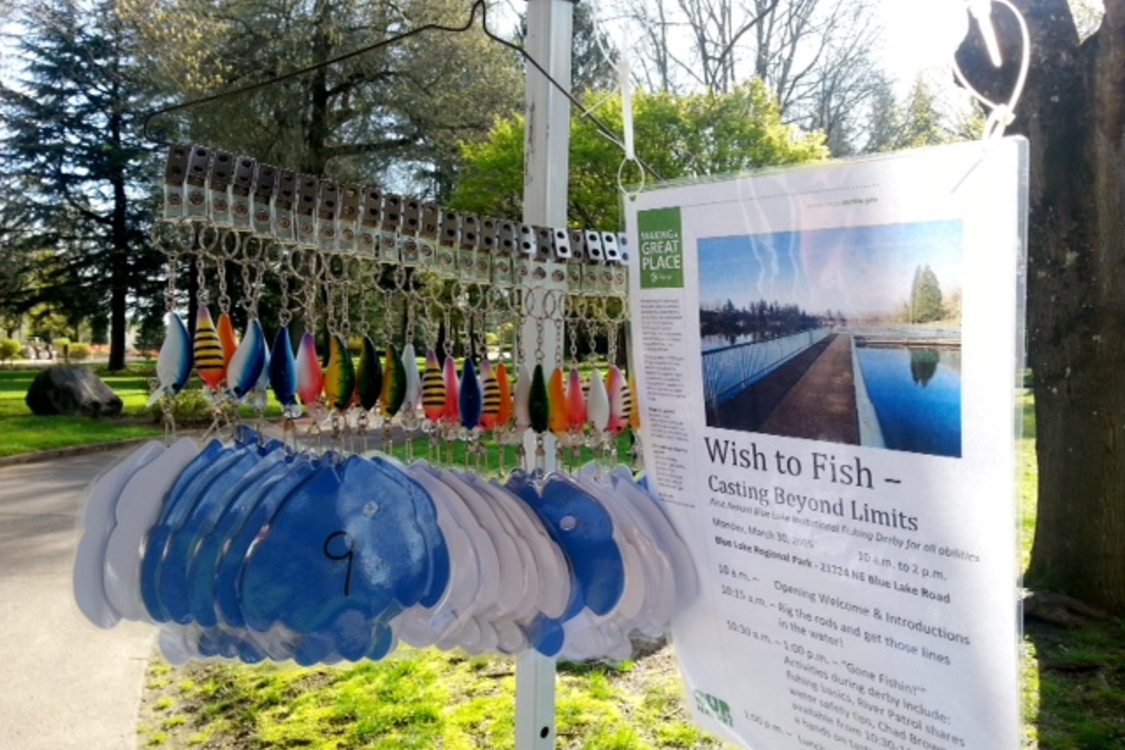 "My hands are still shaking. Look at this,” said Amanda Coltharp, 17, as she juggled a freshly caught rainbow trout, fishing rod and hands dancing with adrenaline.  “My greatest wish is to take a fish home to my dad. Fishing is what we do together.”

Blind since birth, Miguel Peña, 20, said while paddling for the Blind Ambition PDX dragon boat racing team a few months ago that he wanted to go fishing. Peña’s casual remark sparked the idea for the first Wish to Fish: Casting Beyond Limits event at Metro’s Blue Lake Regional Park this spring to provide people with disabilities and at-risk youths the opportunity to do something many of us take for granted – enjoying a simple day of fishing.

On a bright, sunny day wedged between clouds and rain, Wish to Fish drew a group of blind people, a guy with a traumatic brain injury, a woman who has cerebral palsy, a woman who lost a leg from complications with diabetes and a woman with cognitive issues. Add to that a group of six at-risk youths who had experienced poverty, homelessness and other disadvantages.

Somehow, together, they managed to make music. Maybe it was a bit out of tune and not altogether melodic, but it sounded beautiful.

Of course, that’s just part of it. There were a few details to take care of beforehand. For starters, how do we get that much gear, and, once we have the equipment how do we get the lines in the water without seriously hurting someone? The answer turned out to be simple: fishing buddies.

Once the Oregon Department of Fish and Wildlife heard about the event, rods, worms and lures started raining down. Fishing guru Rod Brobeck of Camp Angelos and a string of guys who live to share their love of fishing added their names to the list of those who wanted to help.

I made a few calls to former Metro colleagues Bill Doran and Flor Matias, and I also mentioned the event to Steve Dangler with Multnomah County River Patrol Unit; my neighbor Bruce Broussard; and Frank Rauschkolb, a fisherman I see frequently at Metro’s Chinook Landing Marine Park. When I mentioned it to Lupine DeSnyder, Metro’s parks volunteer coordinator, she could barely contain her excitement. Things started humming along.

For me fishing is linked to storytelling, memories, bad coffee and getting up earlier than you would for any other reason. It’s my dad, my brothers and me sitting in a boat on one of the high lakes of Mount Hood. We’re floating on a surface of glass, and a strand of fog lifts by the morning's first light. Even now many years later those voices mix with laughter and carry across the water.

For Patricia Kepler, memories of fishing are linked to vision and a time before she lost her vision. Kepler, the recreation coordinator for Independent Living Resources, a Portland nonprofit that provides support services to people with disabilities, fished with her dad when she could still see. They also fished together right before he died, long after her vision was gone.

There are fishing stories that make us all pause and look deeply at what we have.

Laurie Wulf, a property management specialist at Metro, remembers her father’s oncologist asking him what he hoped for. His answer was simple: “Three or four good years.”

The doctor asked him to explain.

“I can catch a hell of a lot of fish in three to four years,” he said.

Two weeks after losing his leg, he was swinging the other over the side of a buddy's boat. To a fisherman, life is measured in water, bait and limits.

John Fleming of Independent Living Resources, who is blind, remembers skydiving into mountain lakes to fish. At 1,999 jumps, he holds the record for the most leaps by a blind person. As he got older, he confided that he would have to start jumping tandem at some point. Not stop, just reconfigure. He spoke of a buddy who would fly around the mountains, looking for the perfect place for him to leap out and cast a line.  Puts blind faith into a whole new perspective.

If you strolled down to the fishing docks during Wish To Fish, you might have seen some old friends and made some new ones – always the best part of fishing.

Six blind people cast and reeled. Ron Peterson, who lives with a traumatic brain injury, learned some new techniques from my neighbor. Doran, a retired Metro park ranger, described the light, the park and the water in detail to enthusiastic blind fisherman Al Castenida.

A day such as this is rife with unpredictable moments. There’s the feel of a freshly caught trout, wiggling in hands that are shaking with excitement and backlit by the smile on a young girl’s face.

Weaving through it all is a crazed ballet of fishing lines looping, crossing and tangling. It was a day of grace witnessed, as I saw a line cast too close for comfort near Metro Councilor Shirley Craddick. She turned toward me, and we marveled at the wonder of it all.

Even the smallest breeze or fallen leaf on still water causes ripples that spread far beyond the initial impact. Wish to Fish caused some amazing ripples of its own.

There were prizes of tickets to the Oregon Zoo and concert tickets donated by Portland’5 Centers for the Arts. Sue Lowe, Metro’s guest relations coordinator, spent hours at home cutting and decorating cookies that, even for those who couldn't see, felt like fish. Choreographing, chronicling and celebrating the day, DeSnyder took the time to create awards in braille.

The participants caught eight fish that day. Two were caught by the woman who lost a leg to the ravages of diabetes and who had never fished before. There was a mess of fish caught by a pair of girls, struggling to find their way in the world. You could hear their laughter all the way through the park. Marco Chairez told of fishing in Mexico as he pulled in a nice trout. Peña left with a smile you couldn’t pry off.

Most people left without fish, but as Wulf searched for a worm lost in her pocket, she summed up the day best: “That’s why they call it fishing and not catching.”

Even now, voices mix with laughter and carry across water.