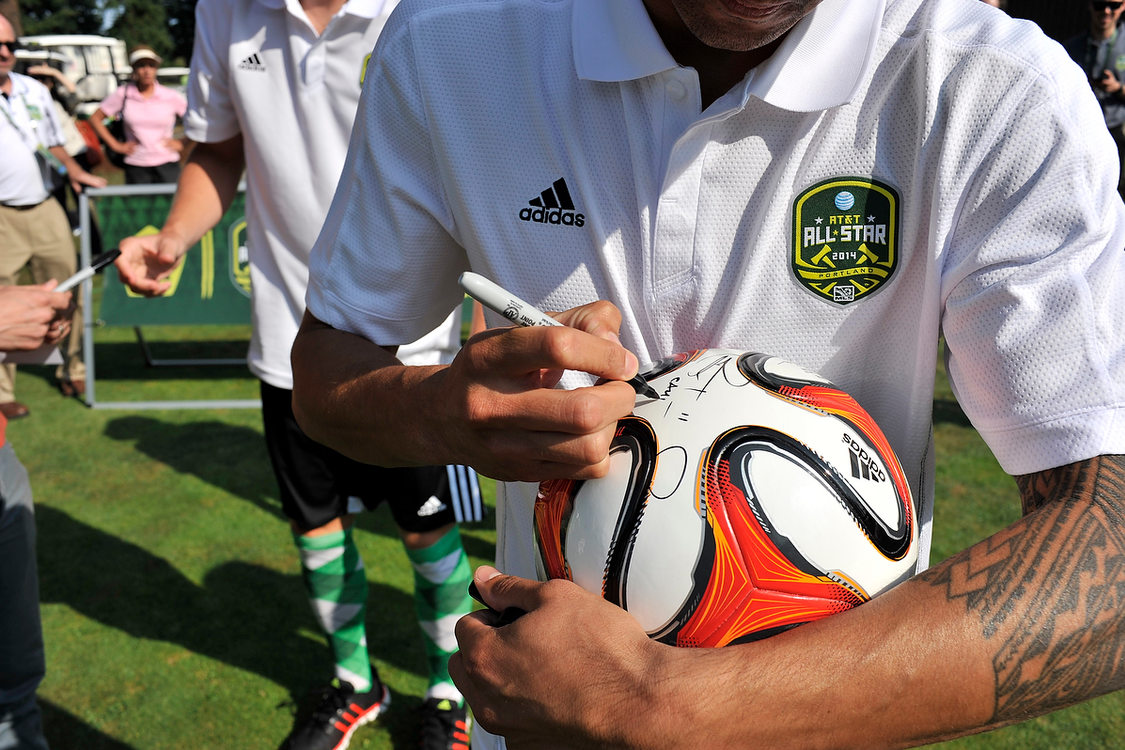 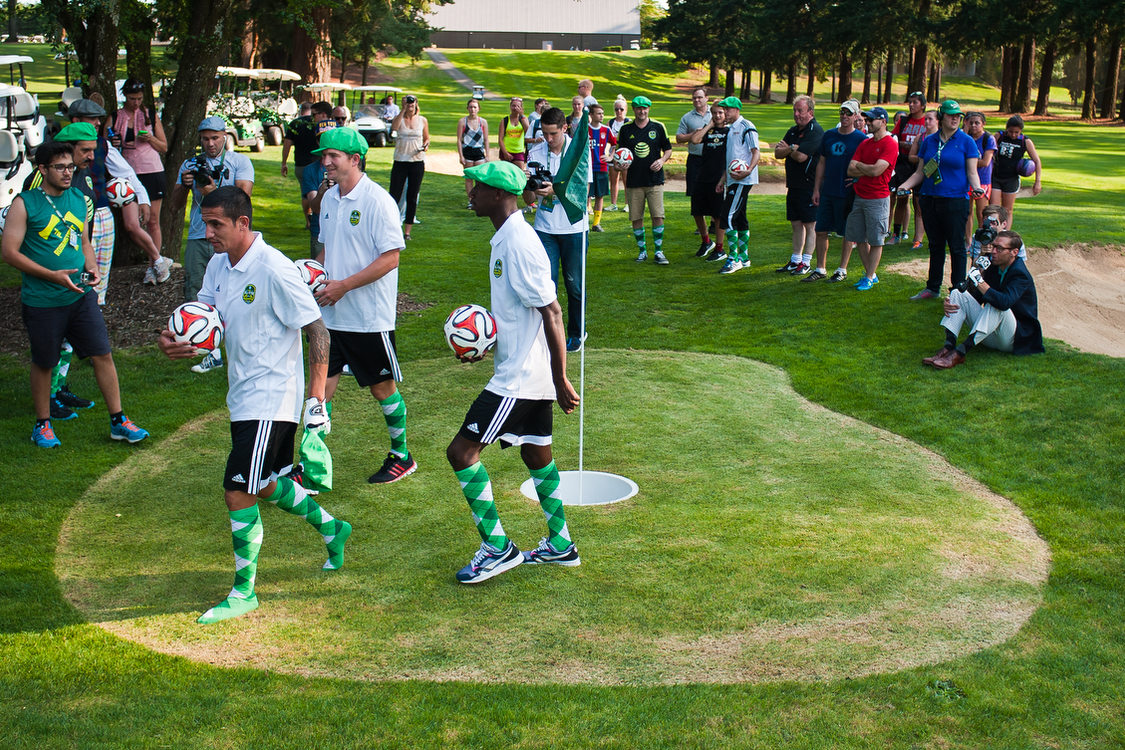 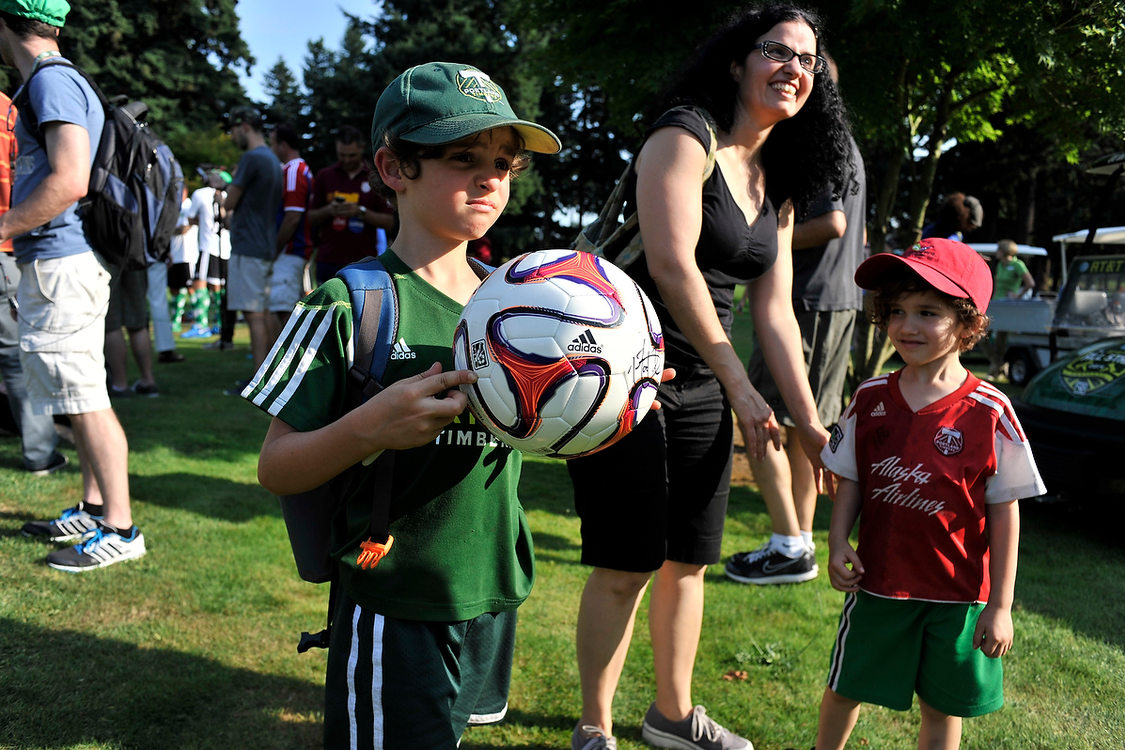 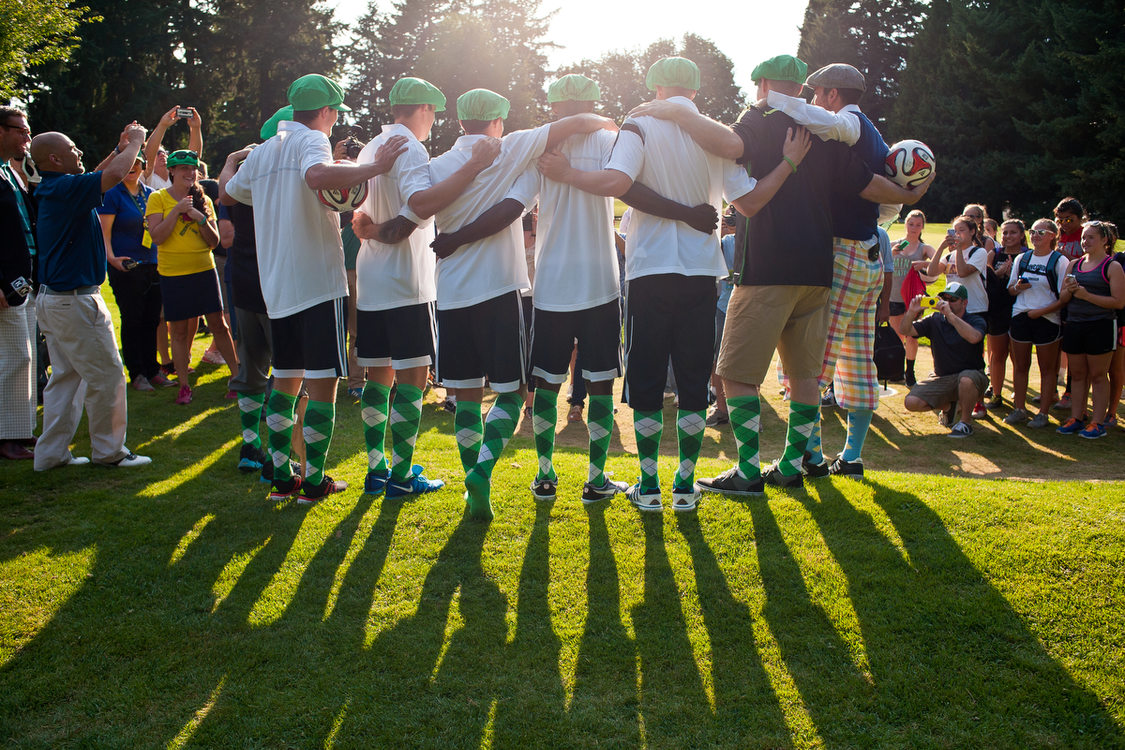 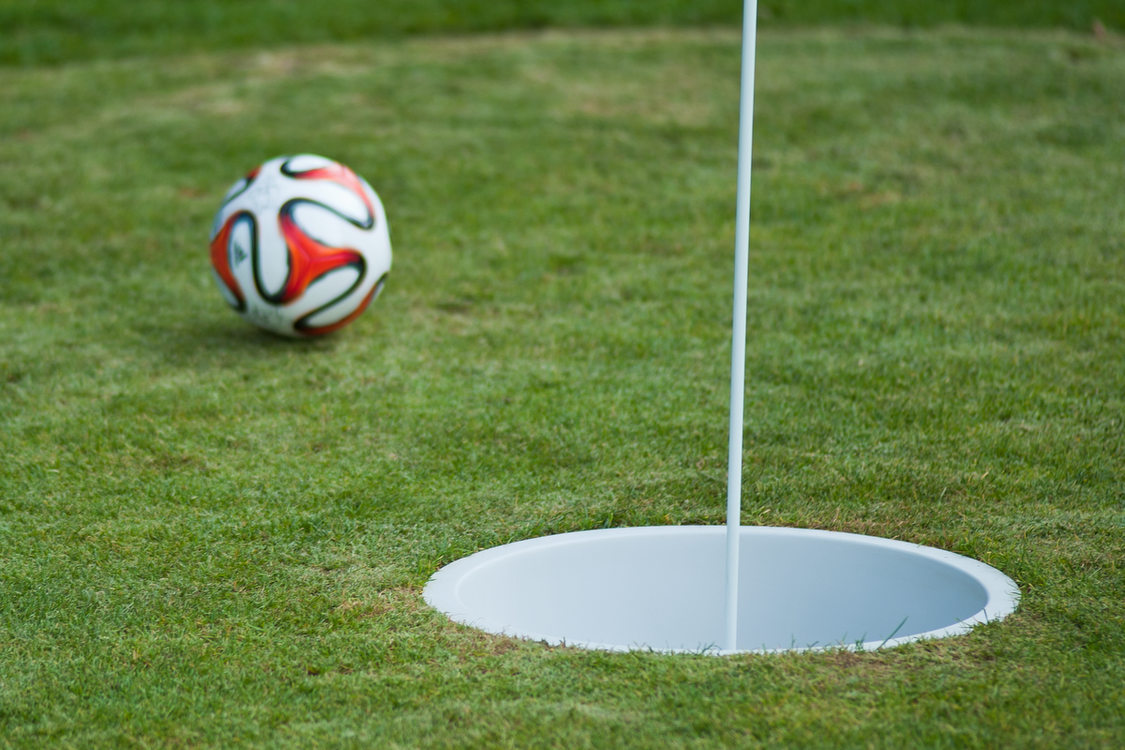 One of the balls from the MLS All-Star footgolf match sits on the putting green at Glendoveer Golf Course.

One of the balls from the MLS All-Star footgolf match sits on the putting green at Glendoveer Golf Course. Metro News photo by Fred Joe. 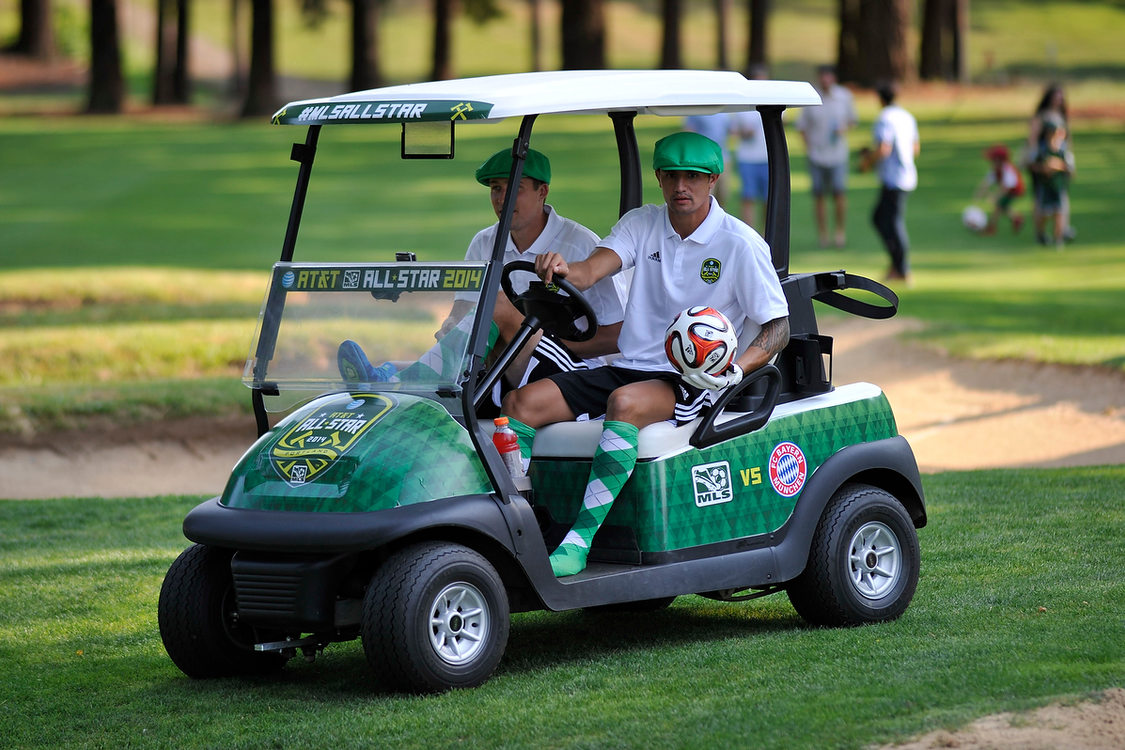 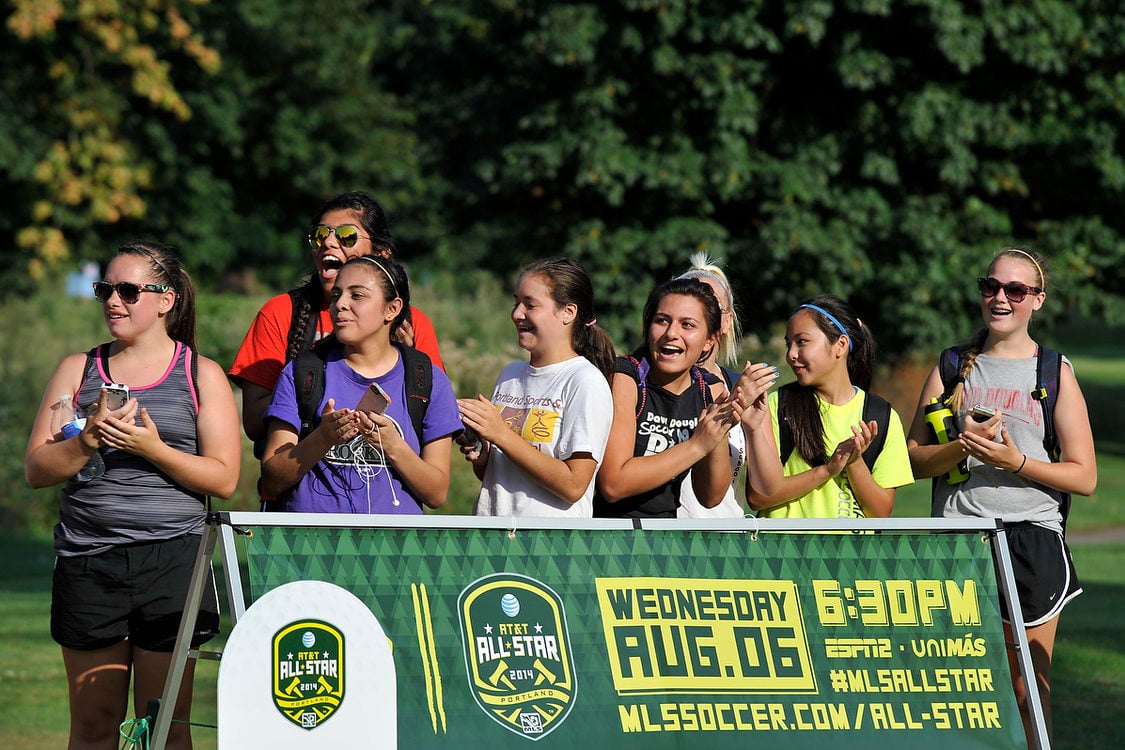 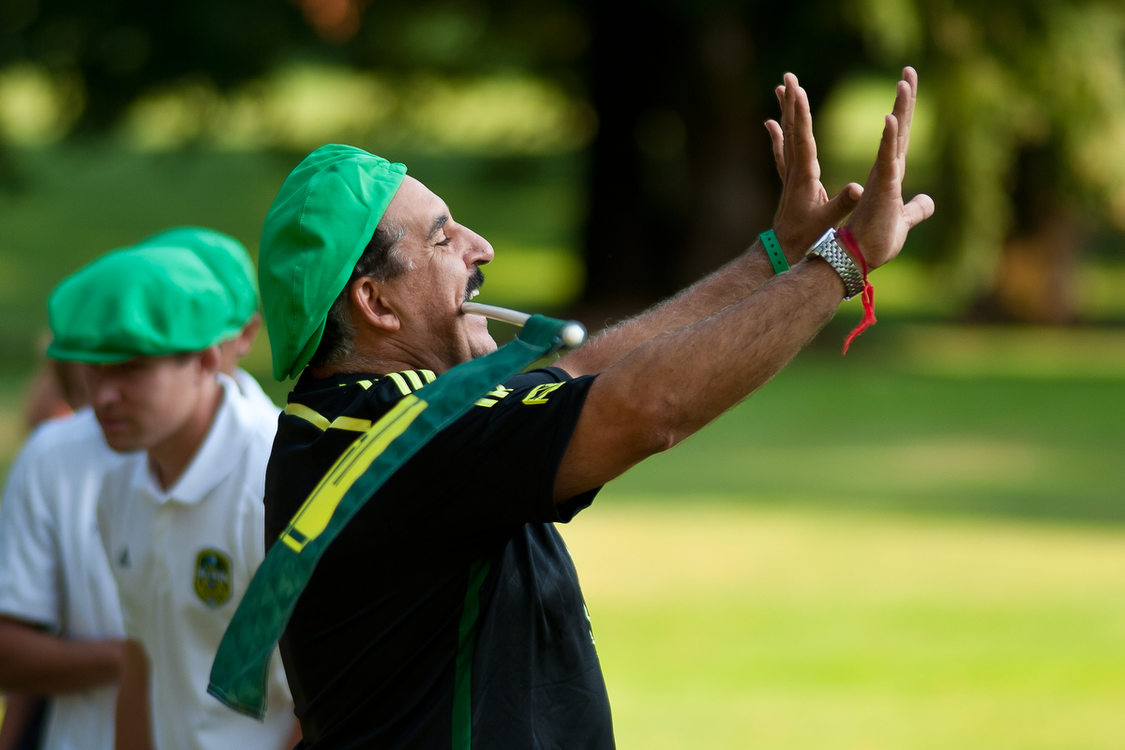 Republica Deportiva anchor Fernando Fiore holds the pin in his teeth as he watches the footgolf competition at Glendoveer on Tuesday. Metro News photo by Fred Joe.

Republica Deportiva anchor Fernando Fiore holds the pin in his teeth as he watches the footgolf competition at Glendoveer on Tuesday. Metro News photo by Fred Joe. 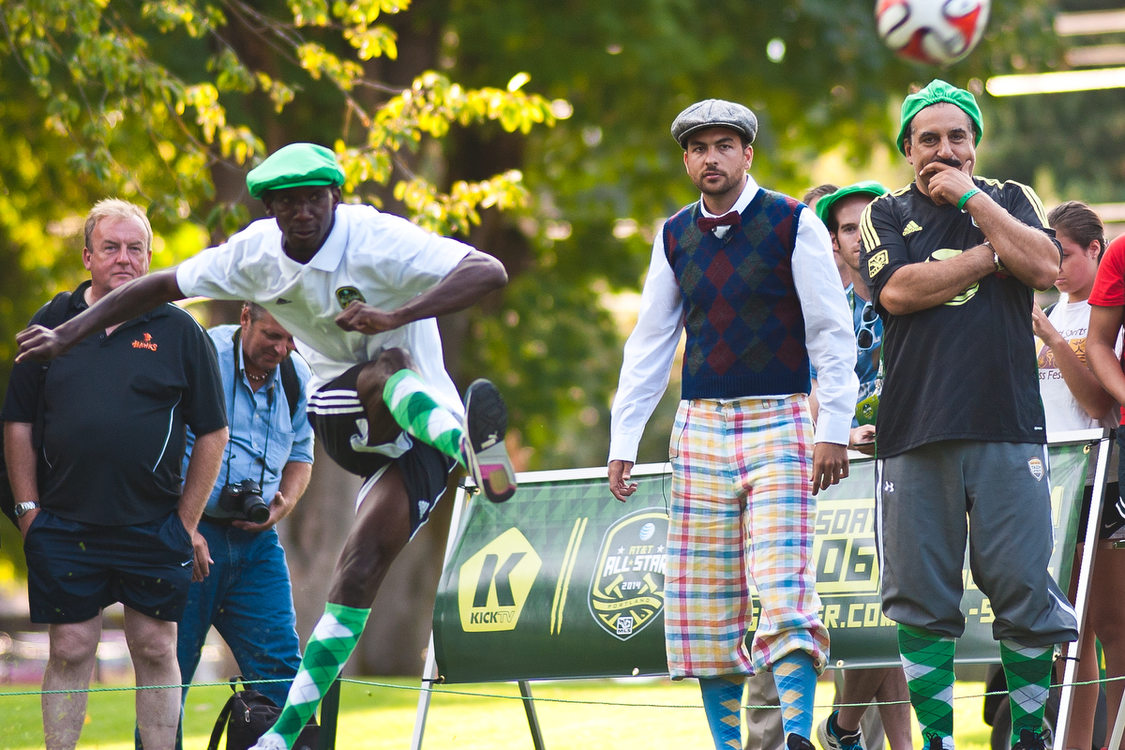 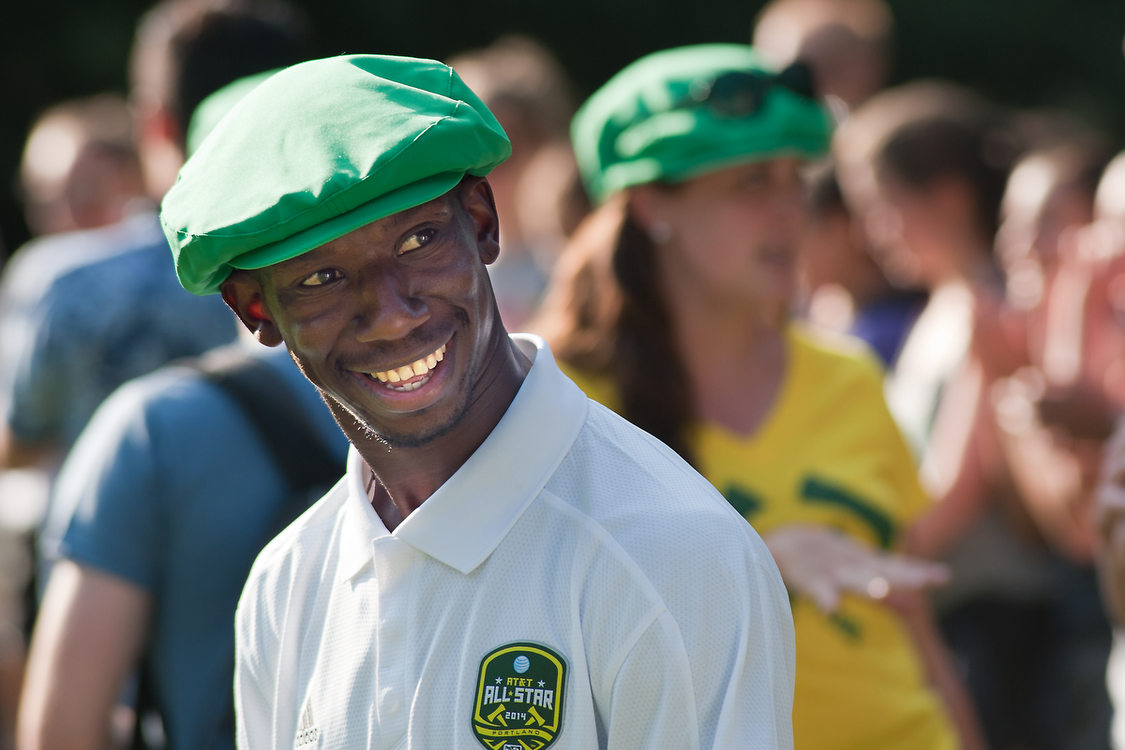 It wasn't quite the Miracle on Ice, but a group of first-time footgolfers bested three teams of MLS All-Stars Tuesday in a three-hole match at Metro's Glendoveer Golf Course.

The event was a part of the festivities leading up to tonight's MLS All-Star Game at Providence Park where MLS All-Stars will take on Bundesliga champion Bayern Munich.

But Tuesday was all about the long game – three special holes designed just for this event at Glendoveer, which hosts Oregon's first footgolf course.

The players were given bright green golf caps and green-and-beige argyle socks to transform them from all-star soccer players to impeccable footgolfers. The lone standout was Vila, who wore rainbow-checkered knickerbockers and blue-and-yellow argyle socks.

They divided into teams of two, playing scramble style where both players get a chance to kick and the best kick determines the next kick position.

As the pro players huddled to learn the rules, the crowd could overhear their confidence. One player asked, "When are we going to get a hole-in-one?"

Cahill was up first, kicking the ball far down the green. The rest of the pros followed suit, all giving strong first kicks – with the exception of Boswell who kicked his ball so far to the left, it was nearly on the green of the adjacent driving range.

This off-center kick followed Boswell throughout the entire event. When another player kicked to the left, someone from the crowd shouted that he had "Boswelled" the kick.

At the putting green for the first hole, the pro players discovered how finicky footgolf can be. Wright-Phillips looked devastated as his ball rolled right near the rim of the hole before spinning past it.  There was a collective groan from the crowd as most pros missed their first putt.

At the end of the first of three holes, Team Fernando was one stroke ahead.

The next two holes played out in the same way, with the all-stars delivering powerhouse kicks to drive down the range but being thwarted when it came to putting.

Team Fernando didn't always drive as well, but their putts were relaxed and controlled. After making par on the first hole, they birdied on both the second and third, ultimately winning the event.

Cahill, who was paired up with Besler, was the expected favorite of the event. He said his attention was focused on the MLS All-Star Game happening today, but he was still happy to participate.

"I definitely know if it wasn't the day before a game then we would really have had a proper go at it," Cahill said. "It's a great occasion for a team or families to come out and be in the open and enjoy a great game."

Team Fernando described their amateur upset as nothing less than epic. Vila likened this win to the 1980 "Miracle on Ice."

"You know, it's like the 1980 U.S. Men's Hockey Team is just below the feat that we've just accomplished," Vila said. "One day they'll make a Disney movie starring Kurt Russell."

Fiore offered to play himself in the movie. Both Fernandos agreed that having the same name was the key to winning this event, as well as being bilingual and discussing their strategy in Spanish.

Vila said that it was probably time to retire so that he can leave the sport as an undefeated champion, whereas Fiore is entranced by the beauty of the course.

"This is beautiful, this is a beautiful place. I think I will come every weekend," Fiore said. "Although I live in Miami, I will make an effort."