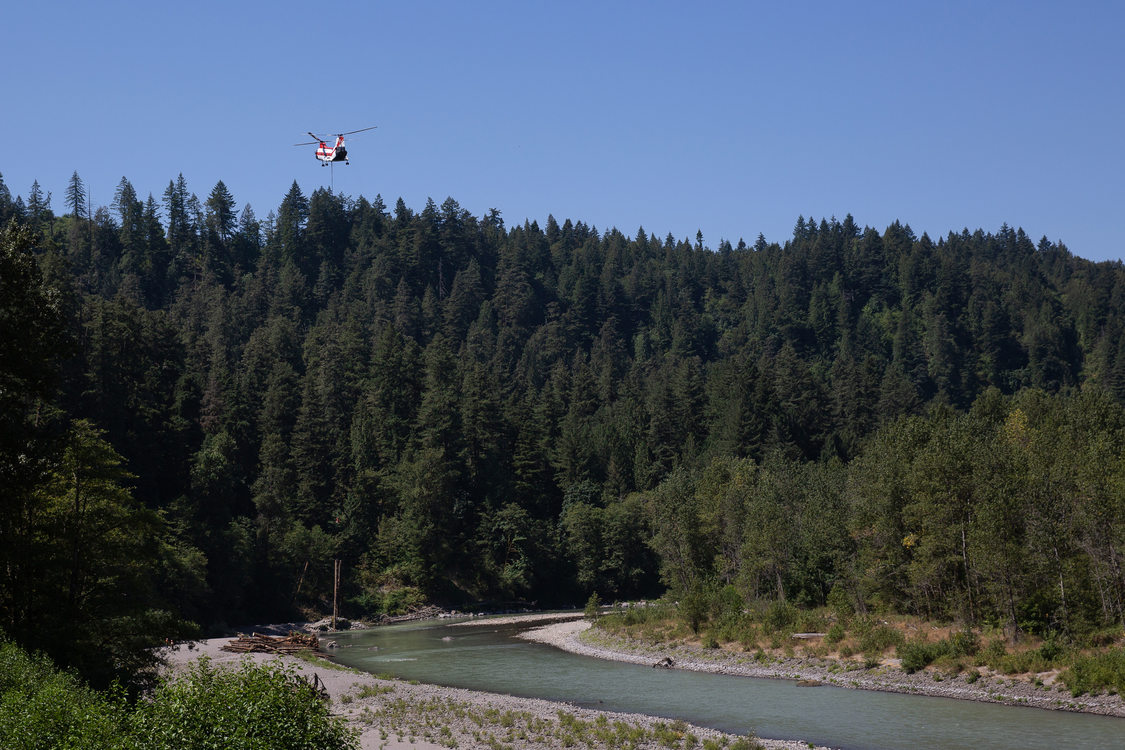 Large logs are airlifted over Oxbow Regional Park to a logjam construction site along the Sandy River. 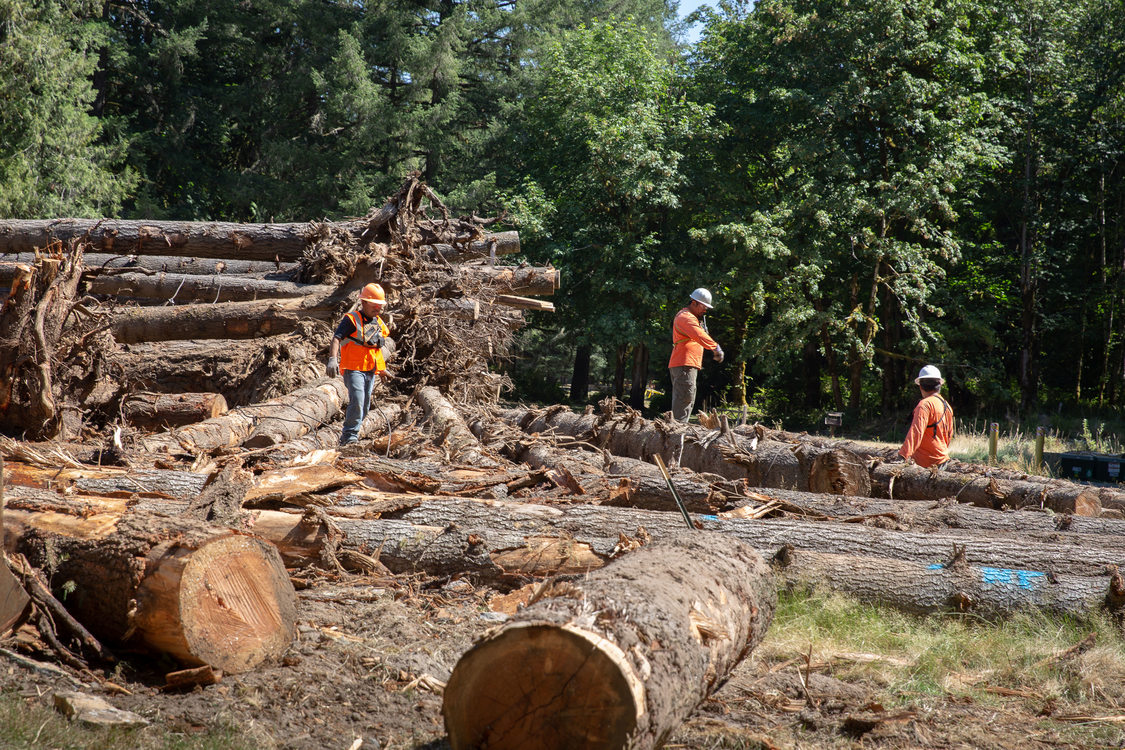 Construction workers prepare logs and root wads to be lifted by helicopter from a staging area in the park.

Much of the wood naturally found in rivers like the Sandy was removed because it was previously thought to be harmful and hazardous. Returning wood to the river helps restore its complexity and enhance stream health. 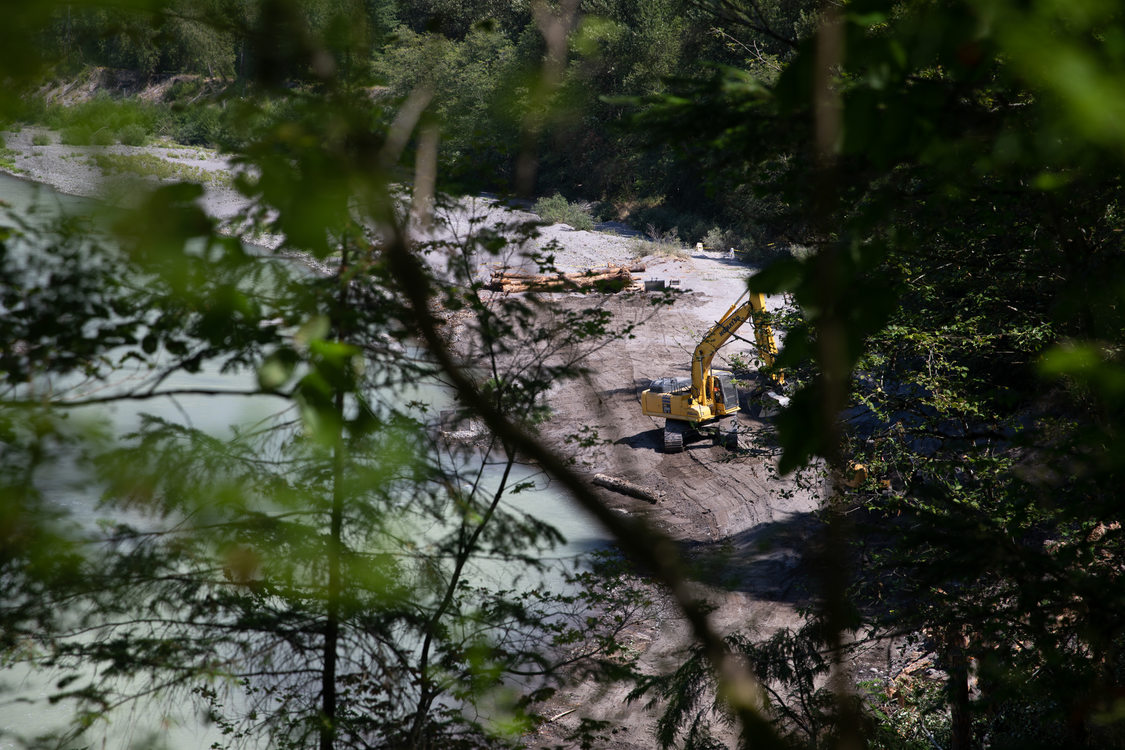 The new logjams will enhance salmon and steelhead habitat on the treasured Wild and Scenic Sandy River. 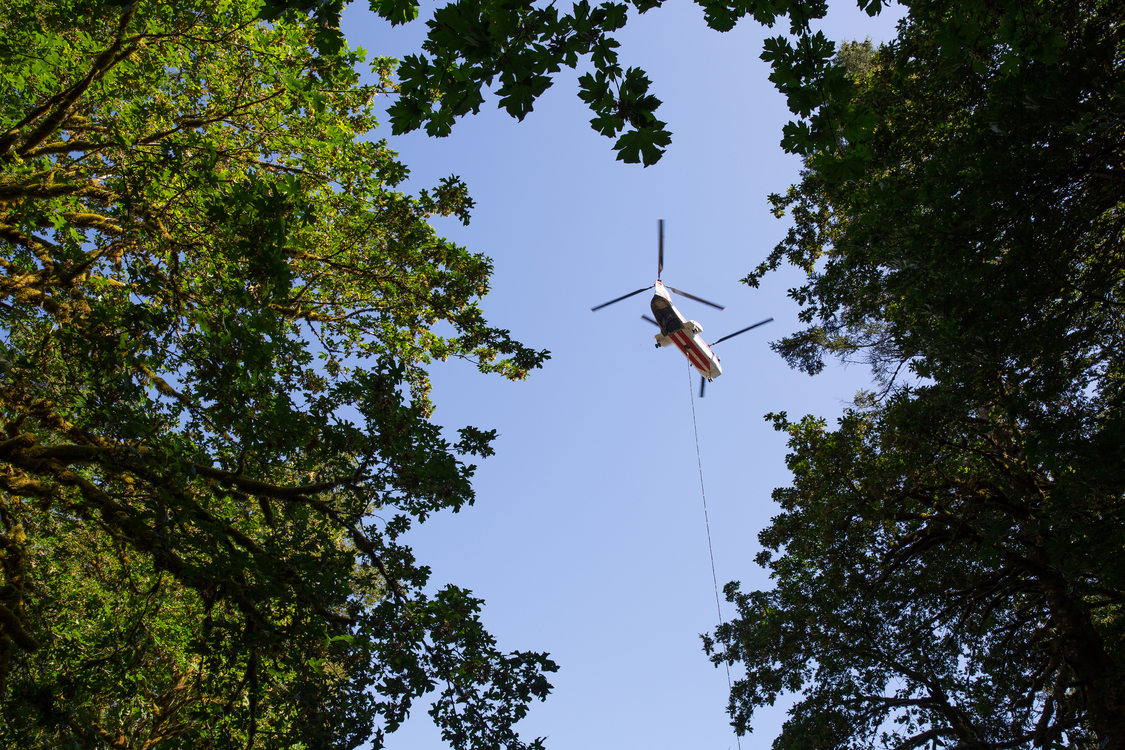 Metro’s stream restoration work at Alder Alcove and the BLM side channel will be finished by the end of August.

Birds weren’t the only things soaring through the air at Oxbow Regional Park this summer.

In July, helicopters airlifted large logs – 30 to 40 feet long and two to three feet in diameter – from a staging area to two locations in the park. From there, crews are constructing logjams to enhance salmon and steelhead habitat on the treasured Wild and Scenic Sandy River.

Chinook and coho salmon as well as steelhead native to the area are at risk. The once thriving populations in the main stem of the Sandy River – which serves as a critical migration corridor for all fish species – became listed under the federal Endangered Species Act in the late 90s. The Sandy is identified as critical to recovering wild fish.

Over the last seven years, Metro has worked closely with the Bureau of Land Management, Portland Water Bureau and the Sandy River Watershed Council on a half dozen significant logjam and side channel projects. The work speeds up the river’s return to its natural state, supports the once-vibrant fish populations of the Pacific Northwest and aids watershed-wide recovery. The projects continue this summer.

Why create man-made logjams that could occur naturally?

“We’re doing what nature would do but on an accelerated timeline,” said Brian Vaughn, a senior natural resource scientist at Metro who is leading the Oxbow project. “The fish need habitat now. Not 10 years from now.”

“Each jam mimics what’s needed at that particular place,” Vaughn said. “The jams slow stream velocity, create resting areas for fish, collect gravel fish use for spawning, and provide nutrients and homes to aquatic insects that the fish eat.”

Young fish depend on these slower flowing cold-water channels. They provide necessary sanctuary and nutrients for juvenile fish to grow strong and healthy enough for their journey to the Pacific Ocean.

For a period of time, common thinking was that wood in streams was a bad thing presenting hazards and compromising stream health. So, people removed much of the wood that used to naturally be found in streams.

But it turns out that thinking was wrong. Wood is essential to a stream’s health.

“A key part of this work is renewing the complexity of the river,” Vaughn said.

This is achieved by adding wood, increasing the number of side channels and restoring natural forests along the shoreline. The new habitat benefits other wildlife like birds, amphibians and river otters.

On a busy summer day, you’ll find hundreds of people enjoying the Sandy River relaxing on the beach, fishing, swimming, paddling a kayak or floating downstream on an inner tube. The logjams are designed to be safe for visitors floating the river and could provide opportunities for people to see fish spawning during Salmon Homecoming.

This summer’s $600,000 project is expected to be complete by the end of August and is possible thanks to money from voter-approved natural areas bond measures and levies. Select nature trails and areas of work are closed during construction to keep Oxbow visitors safe, but there is no closure to navigation on the river.

A collection of public and private organizations, including Metro, came together in 2000 to form the group known today as Sandy River Partners. The organizations recognized the changes happening in the Sandy River Basin and were compelled to work together, first by Portland General Electric’s decision to remove the Marmot and Little Sandy dams and later by the City of Portland’s need to mitigate for the Bull Run water supply system.

The group’s idea was that more could be achieved by pooling resources to focus on watershed-wide restoration goals. Since 2007 the partners have invested more than $10 million in restoration efforts in the Sandy River watershed. The two logjams Metro is currently building at Oxbow are part of this larger strategy developed by the Sandy River Partners.

Independent of Metro’s summer project, the Portland Water Bureau is hard at work engineering complimentary logjams on the east side of Oxbow.

Like a game of supersized Jenga or Lincoln Logs, engineered logjams are carefully planned and can be tricky. Starting at the bottom of a 25-foot hole, large logs are pinned to a frame of tree trunks. Rocks go on the floor, and brush is stuffed all around it. Layering continues in this fashion until the surface is reached.

The bureau supplies Portland’s drinking water, which primarily comes from the Bull Run watershed. The work at Oxbow helps the bureau comply with federal regulations that require it to improve habitat for fish and offset impacts from the operation of the Bull Run water supply.

“The Sandy is not only a salmon stronghold, but it’s also a recreational hotspot, Portland’s backyard, a favorite place people come to fish, hike, and swim,” said Steve Wise, executive director of the Sandy River Watershed Council.

The council connects community members with restoration work to foster a sense of stewardship. The council has organized volunteers for “Weed Smackdown” events and report that restoration efforts along the Sandy have, for the most part, been met with a halo of public support and participation.

The council has partnered with Metro on past logjam projects and is now engaging Mt. Hood Community College students in a Safe Salmon project that replaces pavement in parking lots  with rain gardens.

The coordinated restoration work and the dam removals a decade ago resulted in a promising increase in the number of native fish.

Spring Chinook increased by 90 percent, coho by 137 percent and steelhead by 123 percent in the Sandy, though fall Chinook declined, according to the State of the Sandy report in 2017. The figures are even more impressive when compared to the wild fish populations in the decade prior to their listing as threatened.

“Fish runs are on the rise thanks in part to conservation efforts by Metro and numerous federal, state and nonprofit partners,” Vaughn said. “But they are far from historic levels.”

Ocean conditions, rain and snow levels, temperature and other climate conditions can also lead to major changes year to year.

Vaughn and Wise are optimistic. They agree that all indicators suggest the habitat restoration efforts have been effective.

“To know there are places like the Sandy where we have a chance to restore and maintain full ecological function, that’s exciting,” Wise said.

Related stories
4 projects in one summer at Oxbow Regional Park 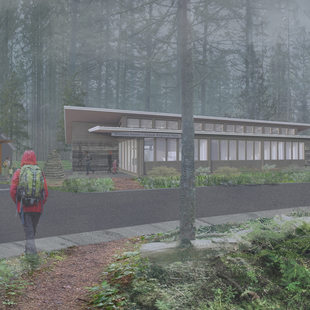 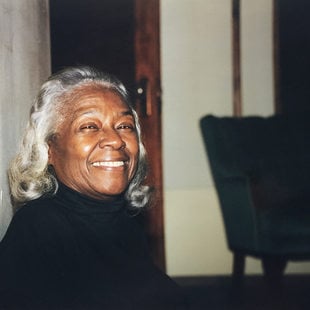