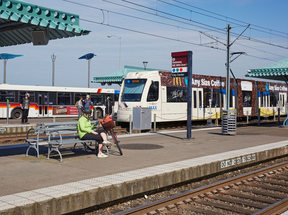 Getting there by transit

Stories about how people across greater Portland are getting to places they need to go. 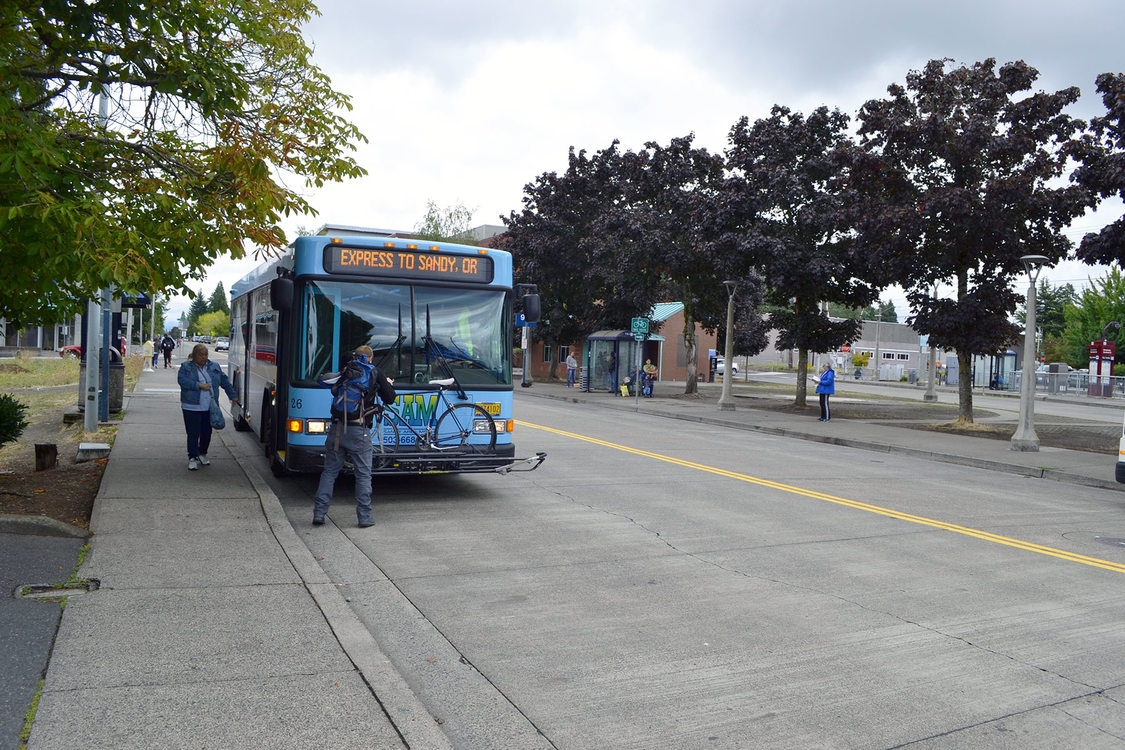 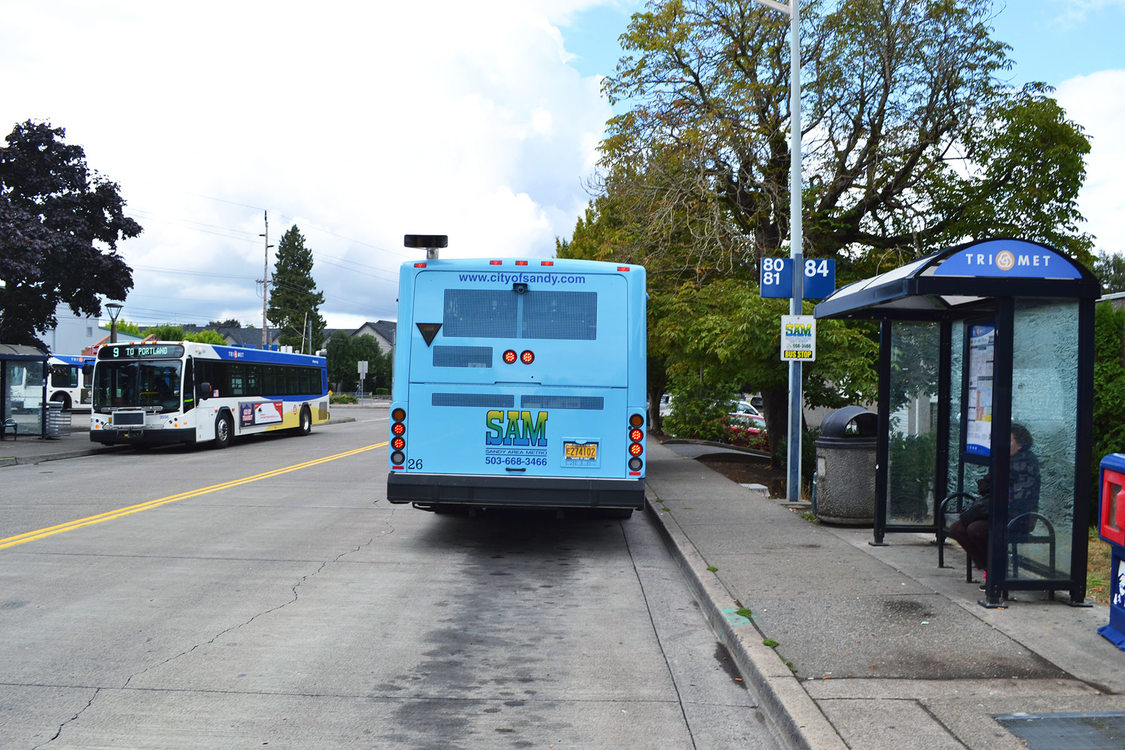 Sandra Wiley lives in a low-income retirement community in Sandy, about 20 miles east of Gresham. She lost the family car five years ago when her husband died, so she needed to find a way to get around town.

“I didn’t know how to do it,” Wiley said about taking the bus. So she called SAM to learn more about it, “and they said, ‘We will pick you up.’”

SAM offers its paratransit service to anyone who lives in its service area. That’s not the case with most other transit agencies.

Wiley’s needs only grew when she broke her hip in April. She now needs a walker and help from her daughter Jill Watson to move around.

“SAM has really helped me,” Wiley said. “Before Jill came down, before I hurt myself, it kept me as independent as possible… It’s a joy to see that bus pull up.”

Like many others living in rural areas with limited transportation choices, Wiley would not be able to get to where she needs to go without the SAM.

“We are a very important link to the rural communities between eastern Clackamas County and the mountain communities with Portland – and vice versa,” Howell said.

The regional transportation plan is updated every four years to keep up with changing demographics and new developments in state and federal regulations. An update is underway for 2018. Learn more.

The state and Metro are giving a boost to small transit agencies, such as SAM, so that people like Wiley can continue to have options for how to move around.

As greater Portland grows, local and regional leaders want to improve and grow transit networks into a fast, reliable and better-connected system for everyone.

In 1987, the state Legislature allowed cities to withdraw from TriMet and run their own transit services. Here’s a timeline of when cities withdrew:

TriMet provides transit service for most of the greater Portland area with an annual ridership of 99 million. But several communities in the Willamette Valley chose to separate from TriMet to form their own transit districts and provide more dedicated transit service in their area.

Since separating, these local transit agencies have built networks that link up with TriMet’s system.

SAM, for example, runs buses every half hour between Sandy and Gresham on weekdays, with limited service on weekends. It also added routes between Sandy and Estacada, and even offers a free shopping shuttle around Sandy.

“Living here in Sandy now with the transit options that we have, it’s fabulous,” said Heather Michet, 61, who has lived in the Sandy area for 30 years.

In Wilsonville, the city’s transit agency South Metro Area Regional Transit provides more bus services throughout Wilsonville than TriMet could provide in the past.

“The mayor and city council are totally supportive of SMART,” said Dwight Brashear, SMART’s transit director. “They are making sure that SMART provides quality service that the city of Wilsonville deserves.”

“Our customers are basically everyone,” said Eric Loomis, SMART’s operations manager. “They are people commuting to and from work… going shopping.”

The number of people riding transit in these suburban and rural communities varies from place to place. Data below from July 2016 through June 2017:

Some smaller communities have struggled to keep transit thriving.

The Great Recession hit Canby Area Transit hard. The transit agency cut service in 2011 and added a bus fare for the first time in 2012. Fewer people have been riding ever since.

The agency’s one remaining bus line runs through parts of Canby and far enough to reach Woodburn and Oregon City, where people can connect to Cherriots and TriMet buses.

“We’ve been working with a flat budget,” she said. “We want to improve the regional connections and, then as revenue allows, bring back a local connector.”

The city’s draft Transit Master Plan outlines plans to add a local circulator and Saturday service, and more frequent service on the bus line to Woodburn and Oregon City.

“There’s always a competition between providing local circulation and regional routes,” Wehling said. “Balancing those needs is a big challenge.”

The state’s $5.3 billion transportation package, signed into law in August, includes more than $1 billion for bus transit improvements across the state.

“As regional transit partners, we all work together to provide the best transit service for communities within our service areas as well as connections to those outside of our district boundaries,” said TriMet general manager Neil McFarlane.

The package will also have a significant impact in Sandy, where SAM is struggling with budget cuts.

In Wilsonville, more funding would help SMART establish new service in developing areas of the city. The agency also has its eye on improving intercity service.

SMART would like to add more service to Salem, Portland and Canby as well as new service to Oregon City, Sherwood, Woodburn and other surrounding communities.

Brashear said small transit providers in Clackamas County have already met to discuss how to achieve that goal together.

Money from the state transportation package would also help TriMet improve service and create a low-income fare program for riders throughout its transit district.

The regional transportation plan is updated every four years to keep up with changing demographics and new developments in state and federal regulations. An update is underway for 2018. Learn more.

Older adults and people with disabilities who cannot travel on their own still need to get to places. Transit agencies in greater Portland help people move around the region and live an independent life.

A look at the reality many people face taking the bus between big cities during rush hour and how the region is working to alleviate these traffic problems.
Related stories
Smaller transit agencies are a lifeline for many older adults and people with disabilities 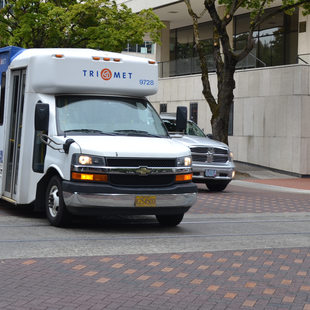